Inventors get a lot of love. Thomas Edison is held up as a tinkering genius. Steve Jobs is considered a saint in Silicon Valley. Hedy Lamar, meanwhile, may have been a Hollywood star but a new book makes clear her real legacy is in inventing the foundations of encryption. But while all these people invented things, it’s possible to invent something even more fundamental. Take Shakespeare: he invented words. And he invented more words—words that continue to shape the English language—than anyone else. By a long shot.

But what does it mean to “invent” words? How many words did Shakespeare invent? What kind of words? And which words are those exactly? Rather than just listing all the words Shakespeare invented, this post digs deeper into the how and the why (or “wherefore”) of Shakespeare’s literary creations.

How Many Words Did Shakespeare Invent? 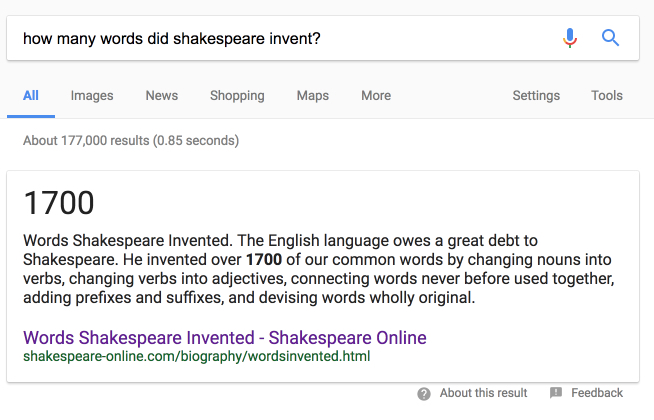 So who’s to blame for the uncertainty around the number of words Shakespeare invented? For starters, we can blame the Oxford English Dictionary. This famous dictionary (often called the OED for short) is famous, in part, because it provides incredibly thorough definitions of words, but also because it identifies the first time each word actually appeared in written English. Shakespeare appears as the first documented user of more words than any other writer, making it convenient to assume that he was the creator of all of those words.

In reality, though, many of these words were probably part of everyday discourse in Elizabethan England. So it’s highly likely that Shakespeare didn’t invent all of these words; he just produced the first preserved record of some of them. Ryan Buda, a writer at Letterpile, explains it like this:

But most likely, the word was in use for some time before it is seen in the writings of Shakespeare. The fact that the word first appears there does not necessarily mean that he made it up himself, but rather, he could have borrowed it from his peers or from conversations he had with others.

However, while Shakespeare might have been just the first person to write down some words, he definitely did create many words himself, plenty of which we still use to this day. The list a ways down below contains the 422 words that almost certainly originated from Shakespeare himself.

But all this leads to another question. What does it even mean to “invent” a word?

How Did Shakespeare Invent Words?

Some writers invent words in the same way Thomas Edison invented light bulbs: they cobble together bits of sound and create entirely new words without any meaning or relation to existing words. Lewis Carroll does in the first stanza of his “Jabberwocky” poem:

`Twas brillig, and the slithy toves
Did gyre and gimble in the wabe:
All mimsy were the borogoves,
And the mome raths outgrabe.

Carroll totally made up words like “brillig,” “slithy,” “toves,” and “mimsy”; the first stanza alone contains 11 of these made-up words, which are known as nonce words. Words like these aren’t just meaningless, they’re also disposable, intended to be used just once.

Shakespeare did not create nonce words. He took an entirely different approach. When he invented words, he did it by working with existing words and altering them in new ways. More specifically, he would create new words by:

The most exhaustive take on Shakespeare’s invented words comes from a nice little 874-page book entitled The Shakespeare Key by Charles and Mary Cowden Clarke. Here’s how they explain Shakespeare’s literary innovations:

We can call what Shakespeare did to create new words “minting,” “coining” or “inventing.” Whatever term we use to describe it, Shakespeare was doing things with words that no one had ever thought to do before, and that’s what matters.

Though today readers often need the help of modern English translations to fully grasp the nuance and meaning of Shakespeare’s language, Shakespeare’s contemporary audience would have had a much easier go of it.  Why? Two main reasons.

First, Shakespeare was part of a movement in English literature that introduced more prose into plays. (Earlier plays were written primarily in rhyming verse.) Shakespeare’s prose was similar to the style and cadence of everyday conversation in Elizabethan England, making it natural for members of his audience to understand.

In addition, the words he created were comprehensible intuitively because, once again, they were often built on the foundations of already existing words, and were not just unintelligible combinations of sound. Take “congreeted” for example. The prefix “con” means with, and “greet” means to receive or acknowledge someone.

It therefore wasn’t a huge stretch for people to understand this line:

That, face to face and royal eye to eye.
You have congreeted.

Shakespeare also made nouns into verbs. He was the first person to use friend as a verb, predating Mark Zuckerberg by about 395 years.

And what so poor a man as Hamlet is
May do, to express his love and friending to you

Other times, despite his proclivity for making compound words, Shakespeare reached into his vast Latin vocabulary for loanwords.

His heart fracted and corroborate.

Here the Latin word fractus means “broken.” Take away the –us and add in the English suffix –ed, and a new English word is born.

New Words Are Nothing New

Shakespeare certainly wasn’t the first person to make up words. It’s actually entirely commonplace for new words to enter a language. We’re adding new words and terms to our “official” dictionaries every year. In the past few years, the Merriam-Webster dictionary has added several new words and phrases, like these:

So inventing words wasn’t something unique to Shakespeare or Elizabethan England. It’s still going on all the time.

But Shakespeare Invented a Lot of New Words

So why did Shakespeare have to make up hundreds of new words? For starters, English was smaller in Shakespeare’s time. The language contained many fewer words, and not enough for a literary genius like Shakespeare. How many words? No one can be sure. One estimates, one from Encyclopedia Americana, puts the number at 50,000-60,000, likely not including medical and scientific terms.

During Shakespeare’s time, the number of words in the language began to grow. Edmund Weiner, deputy chief editor of the Oxford English Dictionary, explains it this way:

The vocabulary of English expanded greatly during the early modern period. Writers were well aware of this and argued about it. Some were in favour of loanwords to express new concepts, especially from Latin. Others advocated the use of existing English words, or new compounds of them, for this purpose. Others advocated the revival of obsolete words and the adoption of regional dialect.

In Shakespeare’s collected writings, he used a total of 31,534 different words. Whatever the size of the English lexicon at the time, Shakespeare was in command of a substantial portion of it. Jason Kottke estimates that Shakespeare knew around 66,534 words, which suggests Shakespeare was pushing the boundaries of English vocab as he knew it. He had to make up some new words.