A statistical analysis of Trump’s inaugural address
by Justin Rice, published on 01/20/2017 | Download this! (PDF) 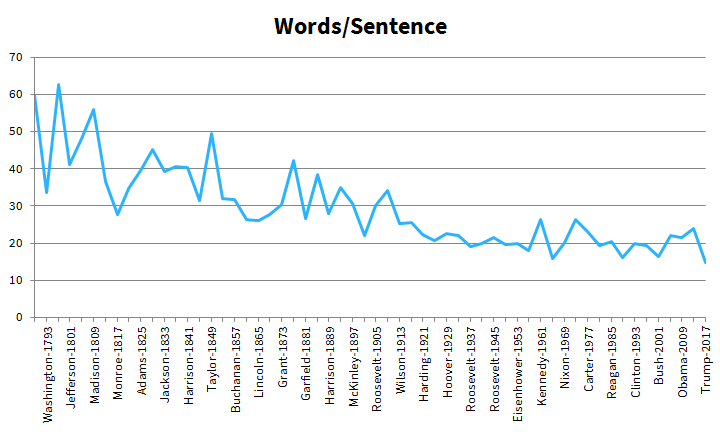 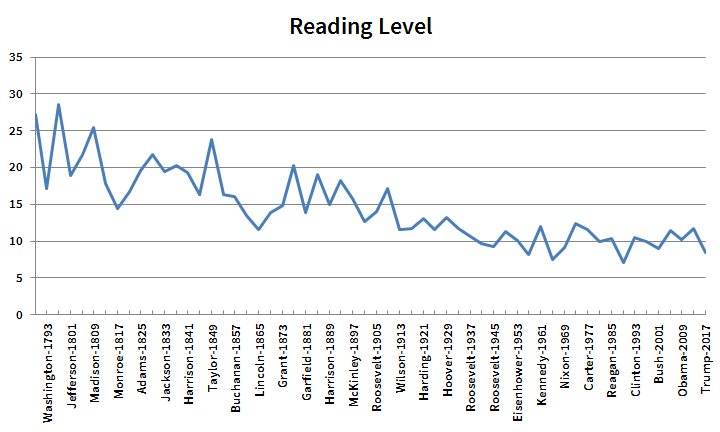 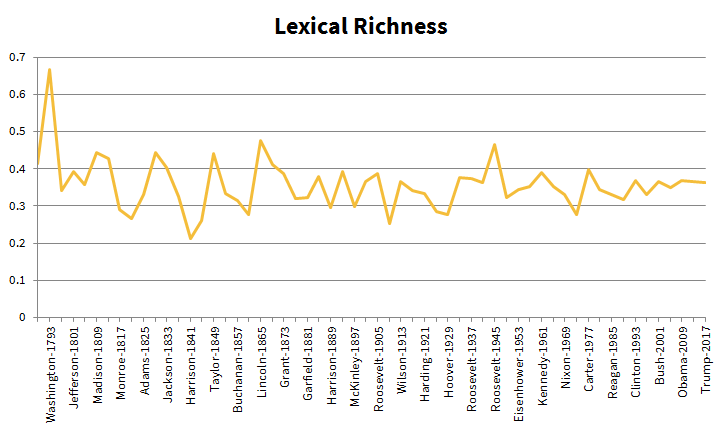 The early inaugurals are like Adams’s: dense and knotty, difficult even on paper. From Coolidge on, the inaugurals are more like Kennedy’s. That change coincides with an increase in the popularity and reach of the speeches themselves. Washington began his first inaugural, “Fellow-Citizens of the Senate and of the House of Representatives.” Coolidge began his with, “My Countrymen.” Washington was speaking to a rarified group of professional politicians on a Wall Street balcony. Coolidge was speaking to the entire country: his was the first address broadcast over the radio. From Coolidge on, every inaugural has been heard not by dozens, but by millions.

In fact, the switch from addressing the ruling class to addressing the general public begins a little earlier than Coolidge. Benjamin Harrison felt compelled to begin his 1889 commenting on the fact that “the people” – in general – should hear the speech:

It wasn’t only the complexity of inaugural language that shifted as these addresses began to be broadcast to an ever larger audience. Specific words that presidents used also changed. If you compare the use of first person singular (“I”) to first person plural (“We”), you can see how, around Harrison’s time, presidents stopped talking about themselves, and started talking about, for, and to the country as a whole: 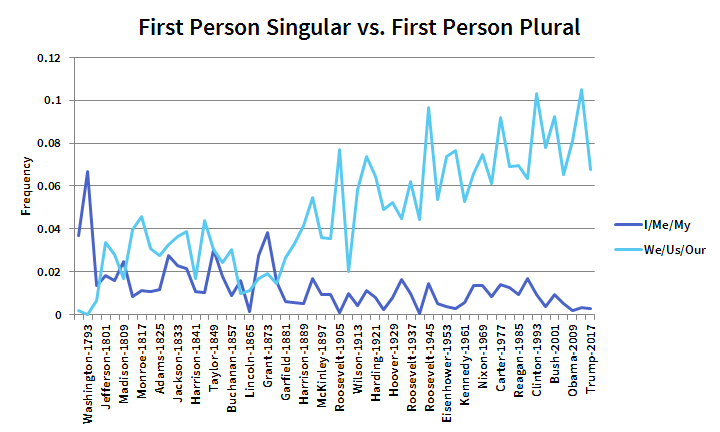 As the audience for inaugural addresses expanded to include the entire country, presidents began to present themselves as figures who bring people together and speak for their interests. Not only is “we” inclusive, it echoes the first words the country spoke in the preamble to the U.S. Constitution: “We the people.”

In a departure from his earlier speeches—many of which we analyzed in preparation for this Analitic—Mr. Trump continued the trend of choosing first person plural over first person singular. Combined, he used “I,” “me” and “my” a total of 4 times. “We,” “us,” and “our” were the pronouns of choice: combined, he used them 98 times. For the first time Mr. Trump seemed to be trying to speak for the whole of America.

Take, for example, the choice to use “will” or “shall”: 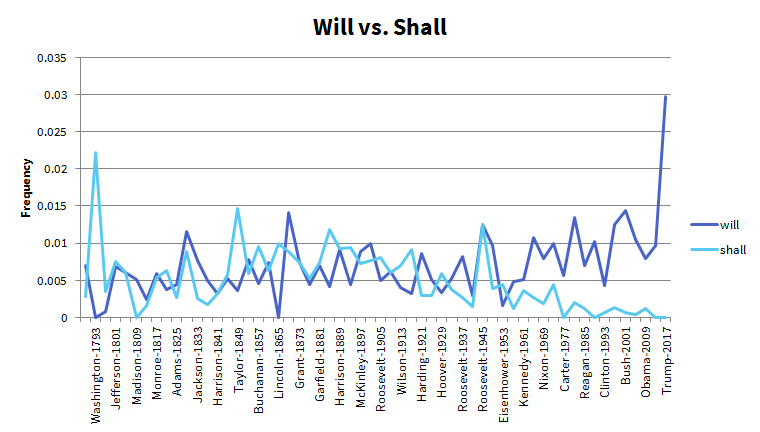 To Americans, “shall” began to sound outmoded (or perhaps British) somewhere around World War II, and presidents pretty much stopped using it. “Will” has the same imperative force, but doesn’t clang as much to modern ears.

Mr. Trump, who has an ear for vernacular, didn’t use “shall” at all in his speech. Instead, he used “will” a record-breaking 43 times, and its prevalence was plain as he declared his intention to upend Washington politics, reinforce borders, and turn us into winners in what he sees as a zero-sum world:

In addition to “we,” Mr. Trump also hit the word “America” pretty hard. If you compare the use of “America,” “American,” and “Americans,” to “citizenship,” “citizen,” and “citizens,” you’ll see that this tendency is also part of a trend: 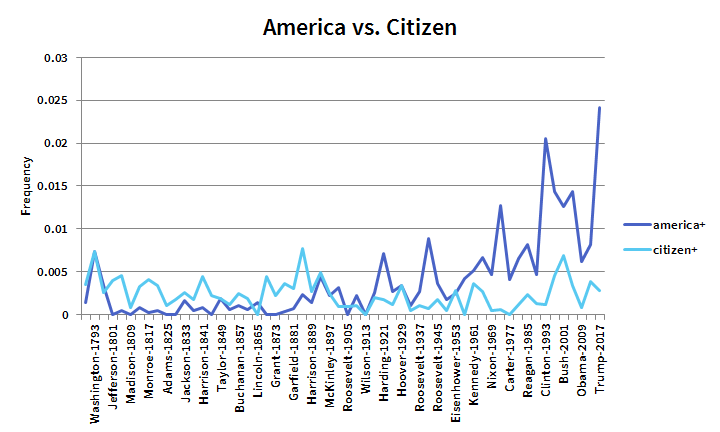 Increasingly, presidents talk about “America”—a particular nation, taken as a whole—and “Americans”—individuals defined by their relationship to that nation. They favor those words over the more generic “citizens.” It’s interesting that this shift first took hold after 1910, when the country emerged as a world power during and after World War I. Presidents, in other words, began to talk about “America” and “Americans” as the United States shifted from establishing (and warring against) itself to measuring and defining itself against the world.

It’s also interesting that Mr. Trump, who used “America/n/s” a record-breaking 35 times, used it not only to include his audience (“This moment is your moment… It belongs to everyone gathered here today and everyone watching all across America…”), but to signal his plans to disengage from the rest of the world:

Mr. Bush’s 2005 inaugural, the first after 9/11, focused on “the ultimate goal of ending tyranny in our world.” He started by conjuring a sense of peril and impending doom, referring to 9/11 as “the day of fire,” and warning that “violence will gather, and multiply in destructive power, and cross the most defended borders.”

He then defined America’s role as the defender of freedom (three paragraphs began, “In America’s ideal of freedom…”), and emphasized that freedom is a choice: “Freedom, by its nature, must be chosen.”

Mr. Obama, on the other hand, used much more positive and uplifting language in his 2013 inaugural. He focused on “our founding creed,” and described “a never-ending journey to bridge the meaning of [that creed] with the realities of our time.”

He outlined a series of steps we have yet to take to (five sentences began, “Our journey is not complete…”), one of which was the realization of gender equality (“…she is an American, she is free, and she is equal…”).

Mr. Trump spent much of his speech outlining where we went wrong. “Politicians prospered, but the jobs left and the factories closed,” he claimed. “The establishment protected itself but not the citizens of our country,” he said. He described “rusted-out factories scattered like tombstones across the landscape of our nation,” and memorably vowed, “[T]his American carnage stops right here and stops right now.”