A Brief History of Color in Literature

Now Israel loved Joseph more than all his children, because he
was the son of his old age: and he made him a coat of many colours.
—from the King James Bible, 1611

It was red and yellow and green and brown
And scarlet and black and ochre and peach
And ruby and olive and violet and fawn
And lilac and gold and chocolate and mauve
And cream and crimson and silver and rose
And azure and lemon and russet and grey
And purple and white and pink and orange…
—from Joseph and the Amazing Technicolor Dreamcoat, 1973

Genesis 37 tells the story of Joseph, Israel’s favorite son, whose father gave him “a coat of many colours” as a token of his affection, and whose brothers grew so jealous of the gift they sold him into slavery. When Andrew Lloyd Webber and Tim Rice turned the story into a hit musical, they took great pains to enumerate the colors of the coat in question—it was, after all, the wealth of colors that made his brothers so jealous—but what’s striking about the Bible version is that not a single specific color is mentioned. The coat isn’t red or yellow or green or scarlet or black or ochre or peach: it’s just “a coat of many colours.” Strange, right?

Equally strange is the Bible’s description of the rainbow that God offered Noah as part of his promise not to flood the earth again:

I do set my bow in the cloud, and it shall be for a token of a covenant between me and the earth. And it shall come to pass, when I bring a cloud over the earth, that the bow shall be seen in the cloud.

While the modern rainbow is pretty much the defining example of the color spectrum—it’s how we teach children ROYGBIV—the Bible’s “bow in the cloud” is, well, colorless. Two Bible stories featuring color and yet not a single specific color mentioned.

To put that observation in context, we can look at a graph of the frequency of color words over the last five-hundred years using Google Books: 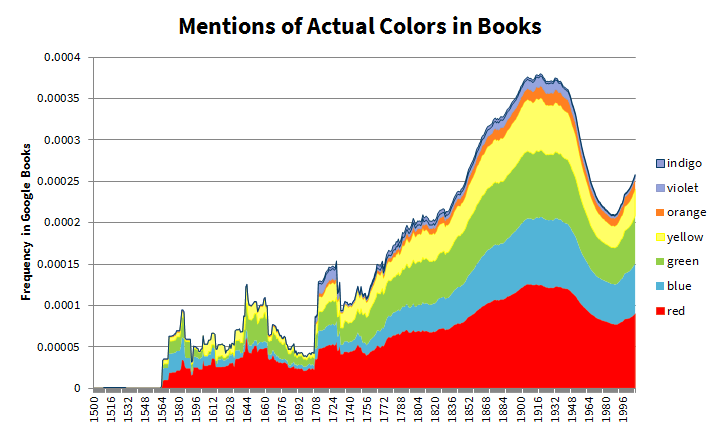 As you can see, there’s a definite trend: over the last 500 years, language has become more colorful.

Why the lack of color in early writing? And why the steep increase starting in the 1700s?

To answer those questions, let’s borrow some insight from William Gladstone’s 1858 study of the early use of color.

In “Homer’s Perceptions and Use of Colour”—sort of a Victorian-era precursor to this post—Gladstone performs a manual statistical analysis of Homer without the convenience of a computer, diligently counting every color word and detailing his findings with 30-plus pages of examples. He points out that Homer rarely mentions color—he never calls the sky blue, for instance—and that when he does, he uses “the same word to denote not only different hues or tints of the same colour, but colours which, according to us, are essentially different.” Oinops (οἶνοψ), for instance, which means “wine-looking” or “wine-dark,” is used to describe both the color of sea (18 times), and the color of oxen (twice), neither of which looks much like wine to the modern eye.

“Homer’s perceptions of the prismatic colours, or colours of the rainbow,” Gladstone writes, “were, as a general rule, vague and indeterminate.” He points to “the vast predominance of the most crude and elemental forms of colour, black and white, over every other,” and concludes that to Homer, and to the ancient Greeks in general, color wasn’t defined by hue, but by lightness. Things were light or dark more than they were red, orange, yellow, green, blue, indigo, or violet. His conclusion: “the organ of colour and its impressions were but partially developed among the Greeks of the heroic age.” The ancient Greeks, in other words, were color blind—if Aristotle played some online solitaire with these rainbow-colored cards, he wouldn’t think of them as being rainbow-colored at all.

Gladstone’s work was no doubt slow and painstaking, but with the help of computers, we can replicate and extend it pretty quickly. When we compare prismatic color words to lightness words in Homer, the Bible, the complete works of Shakespeare, and the Google Books corpus from 1800, 1858 (the year Gladstone published), and 2008 (the most recent data), here’s what we find: 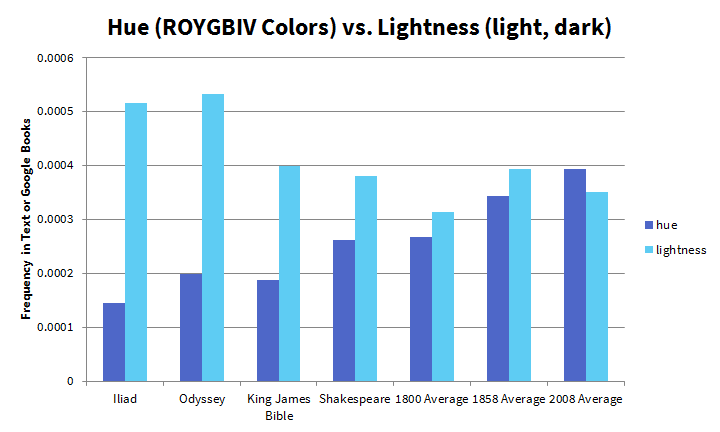 Gladstone’s observation about color in Homer is true of the Bible—references to light and dark are more than twice as frequent as references to color—which makes sense given Noah’s colorless rainbow and Joseph’s colorless coat of many colors. It’s also true of Shakespeare, who lands somewhere between ancient and modern writing. In fact, there seems to be a continuing trend favoring hue over lightness as time goes on. If we plot the ratio of the two across Google Books, we can get a picture of how the trend plays out: 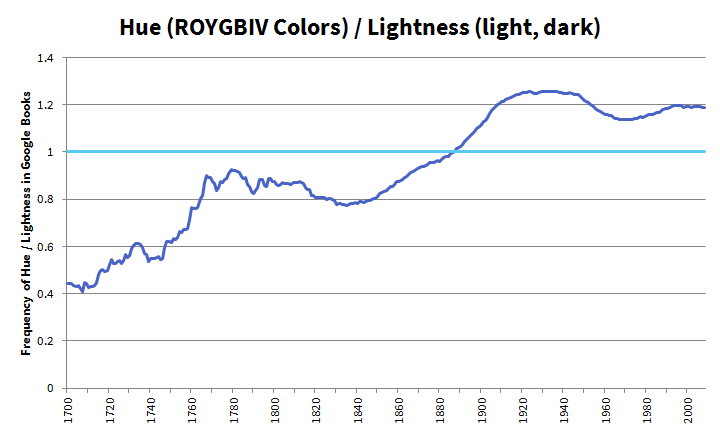 Over a few hundred years, hue slowly ascends, finally surpassing lightness in 1892. What might have happened to cause people to perceive color differently?

That question ignited a huge debate in the years following Gladstone’s study, and in an attempt to answer it, scientists began conducting experiments testing color perception in everyone from employees of the Swedish railway system to far-flung indigenous populations. If you look at Google Books, you can see that the very idea of color blindness was born right around this time. It exploded quickly: 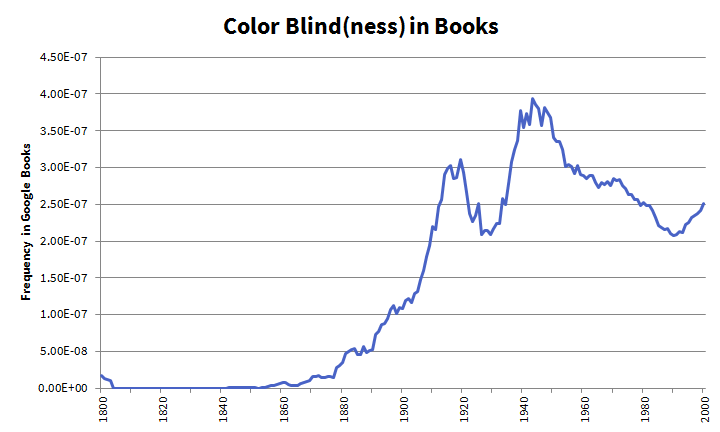 In the late 1800s, scientists found that a portion of the population does, in fact, have difficulty distinguishing between certain colors, which means Gladstone’s literary analysis actually led to the scientific discovery of color blindness. But they also showed that it was pretty unlikely that human “organs of perception” had changed overall since The Iliad. If the rise of color words wasn’t due to an ocular change, what might have caused it?

One theory: people began to think about color differently.

To the ancient Greeks, and to pretty much everyone before Isaac Newton, color was an inherent property of an object. A table wasn’t brown: it was table-colored. When Newton shined a light through a prism, discovered the visible spectrum, and published Opticks: Or, a Treatise of the Reflexions, Refractions, Inflexions and Colours of Light in 1704, he revealed that color exists independent of things. Suddenly, it was possible to talk about red without talking about wine. The increase in the frequency of color words coincides with the spread of color as an abstract concept.

If you’d asked Moses or Homer—“What color is a rainbow?”—they probably would have found the question puzzling. To them, a rainbow was rainbow-colored. Ask any fourth grader today, and they’ll tell you a rainbow is lots of colors—it’s red and orange and yellow and green and blue and indigo and violet—which is exactly how we teach children color. We learn to see like Newton, which is what makes the language of the ancient world seems oddly colorless to us.