Many writing guides instruct new writers to set a scene with all five senses. Describing vivid imagery is obvious, but I was also curious about a lesser discussed sense. How often do authors invoke a smell for the reader? Are there any novelists obsessed with scent? And if they are obsessed, are they filling their writing with pleasant or disgusting odors?

I chose an eclectic sample of 30 authors and scanned through their millions of words for any mention of “smell” (including “smell”, “smelled”, “smelt”, “smelly”, “smells”, and “smelling”). It’s not a perfect metric by any stretch, it ignores words like “scent” or “whiff” as well as more complex signaling of smells such as “his nose twitched as he took in the air,” but it is straightforward.

To sum up what I discovered, below is a chart of famous authors ranked by the relative “smelliness” of their books. 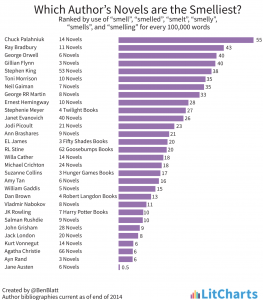 If one were to scan through hundreds more authors, additional names might come in on the extremes, but in the small sample above two novelists stick out: Jane Austen and Chuck Palahniuk.

The Pride and Prejudice author is not big when it comes to smells. In her six books she brought up smell just four times, often in a benign manner. Perhaps the chance of introducing anything putrid into the nose of the romance reader wasn’t worth the risk.

Here are some examples of Jane Austen describing smells:

“Never had the exquisite sight, smell, sensation of nature, tranquil, warm, and brilliant after a storm, been more attractive to her”

“…with feelings sadly pained by his language and his smell of spirits.”

Novelists like Gillian Flynn, Ray Bradbury, and George Orwell mentioned smells plenty in their books, but are still beaten out by Fight Club author Chuck Palahniuk by a sizable margin. While Austen averaged about one mention of smell for every 1.5 entire novels, you can count on coming across smell once every six pages or so in a Palahniuk novel.

If you haven’t read any of his novels, it’s safe to describe Palahniuk’s characters and stories as dirty. It’s dark humor and appropriately the descriptions of the smells are not heavenly. He doesn’t describe the nice smell of perfume, but instead “smell a hint of Chanel No. 5 perfume mixed with his BO.” It’s not enough to say a dirty bedroom smells, but that it has the same smell as “tennis shoes in September after he’s worn them all summer without socks .” Palahniuk doesn’t just settle at describing the scent of someone’s bad breath, but instead makes note that it “smelled like a burp after you’ve ate pork sausage for breakfast.”

I did a count of all of Palahniuk’s descriptions and found that just 15% of his smell descriptions are good and the rest of them are meant to disgust in some way. Smell is subjective, so perhaps your count would differ slightly from my 15% estimation, but not by too much unless you believe his description of the “smell of whiskey and cow sh-t” makes your nose dance with joy.

Like many authors, Palahniuk has advised writers to “show not tell.” His frequent use of words that invoke an olfactory reaction is a perfect example of showing and not telling in action. It’s not just an oddity that some authors write smellier books than others. When a reader comes across a description of a character’s smell or the scent of a disgusting room, it becomes easier to vividly imagine the entire scene.

Ben Blatt is the author of Nabokov’s Favorite Word Is Mauve.