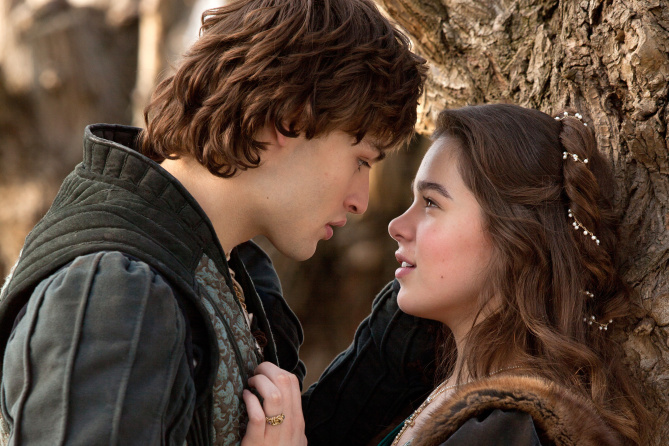 Douglas Booth and Hailee Steinfeld as Romeo and Juliet in the 2013 dramatic film adaptation. Image from Entertainment Weekly.

The subject of soliloquy in Romeo and Juliet is an intense area of scholarly research, intense debate, and erudite prognostication. But what about a basic understanding of the Romeo and Juliet soliloquies? Not every high school sophomore or English teacher for that matter needs to understand the angle of diegetic monologue or the impact of potential redaction. Instead, we’ve provided the full text of the major Romeo and Juliet soliloquies, a link to a modern English translation for each one, and a roundup of helpful resources for more information.

First, what is a soliloquy?

Here is the LitCharts definition of soliloquy:

The literary terms “soliloquy” and “monologue” are often used interchangeably. There are, however, technical differences. Both are delivered by a single speaker. Both are speeches as opposed to an interchange of dialogue. So what’s the difference? It has to do with the audience. In soliloquies, the speaker delivers his or her speech to no one in particular, unless it’s to him or herself and naturally to the audience. A monologue, by contrast, is delivered to other characters.

Soliloquy in Romeo and Juliet: The Top 5

These examples of soliloquy in Romeo and Juliet convey the pathos and depth of Shakespeare’s characters, the beauty of his language, and the profound influence of his words on the English language.

(There is a full list of the Romeo and Juliet soliloquies at the end of this section.)

Romeo: “But soft! What light through yonder window breaks?” from Act 2, Scene 2

But soft! What light through yonder window breaks?
It is the east, and Juliet is the sun.
Arise, fair sun, and kill the envious moon,
Who is already sick and pale with grief,
That thou, her maid, art far more fair than she.
Be not her maid since she is envious.
Her vestal livery is but sick and green,
And none but fools do wear it. Cast it off!
It is my lady. Oh, it is my love.
Oh, that she knew she were!
She speaks, yet she says nothing. What of that?
Her eye discourses. I will answer it.—
I am too bold. ‘Tis not to me she speaks.
Two of the fairest stars in all the heaven,
Having some business, do entreat her eyes
To twinkle in their spheres till they return.
What if her eyes were there, they in her head?
The brightness of her cheek would shame those stars
As daylight doth a lamp. Her eye in heaven
Would through the airy region stream so bright
That birds would sing and think it were not night.
See how she leans her cheek upon her hand.
Oh, that I were a glove upon that hand
That I might touch that cheek!

Romeo “Oh, she doth teach the torches to burn bright!” from Act 1, Scene 5

Oh, she doth teach the torches to burn bright!
It seems she hangs upon the cheek of night
Like a rich jewel in an Ethiope’s ear.
Beauty too rich for use, for earth too dear.
So shows a snowy dove trooping with crows
As yonder lady o’er her fellows shows.
The measure done, I’ll watch her place of stand,
And, touching hers, make blessèd my rude hand.
Did my heart love till now? Forswear it, sight!
For I ne’er saw true beauty till this night.

Juliet: “The clock struck nine when I did send the Nurse” from Act 2, Scene 5

The clock struck nine when I did send the Nurse.
In half an hour she promised to return.
Perchance she cannot meet him. That’s not so.
Oh, she is lame! Love’s heralds should be thoughts,
Which ten times faster glide than the sun’s beams,
Driving back shadows over louring hills.
Therefore do nimble-pinioned doves draw love
And therefore hath the wind-swift Cupid wings.
Now is the sun upon the highmost hill
Of this day’s journey, and from nine till twelve
Is three long hours, yet she is not come.
Had she affections and warm youthful blood,
She would be as swift in motion as a ball.
My words would bandy her to my sweet love,
And his to me.
But old folks, many feign as they were dead,
Unwieldy, slow, heavy, and pale as lead.
O God, she comes.—O honey Nurse, what news?
Hast thou met with him? Send thy man away.

Gallop apace, you fiery-footed steeds,
Toward Phoebus’ lodging. Such a wagoner
As Phaeton would whip you to the west
And bring in cloudy night immediately.
Spread thy close curtain, love-performing night,
That runaways’ eyes may wink, and Romeo
Leap to these arms, untalked of and unseen.
Lovers can see to do their amorous rites
By their own beauties, or, if love be blind,
It best agrees with night. Come, civil night,
Thou sober-suited matron, all in black,
And learn me how to lose a winning match
Played for a pair of stainless maidenhoods.
Hood my unmanned blood bating in my cheeks,
With thy black mantle, till strange love, grow bold,
Think true love acted simple modesty.
Come, night. Come, Romeo. Come, thou day in night,
For thou wilt lie upon the wings of night
Whiter than new snow upon a raven’s back.
Come, gentle night, come, loving, black-browed night,
Give me my Romeo. And when I shall die,
Take him and cut him out in little stars,
And he will make the face of heaven so fine
That all the world will be in love with night
And pay no worship to the garish sun.
Oh, I have bought the mansion of a love,
But not possessed it, and though I am sold,
Not yet enjoyed. So tedious is this day
As is the night before some festival
To an impatient child that hath new robes
And may not wear them.

How oft when men are at the point of death
Have they been merry, which their keepers call
A lightning before death! Oh, how may I
Call this a lightning?—O my love, my wife!
Death, that hath sucked the honey of thy breath,
Hath had no power yet upon thy beauty.
Thou art not conquered. Beauty’s ensign yet
Is crimson in thy lips and in thy cheeks,
And death’s pale flag is not advancèd there.—
Tybalt, liest thou there in thy bloody sheet?
O, what more favor can I do to thee,
Than with that hand that cut thy youth in twain
To sunder his that was thine enemy?
Forgive me, cousin. —Ah, dear Juliet,
Why art thou yet so fair? Shall I believe
That unsubstantial death is amorous,
And that the lean abhorrèd monster keeps
Thee here in dark to be his paramour?
For fear of that, I still will stay with thee,
And never from this palace of dim night
Depart again. Here, here will I remain
With worms that are thy chambermaids. Oh, here
Will I set up my everlasting rest,
And shake the yoke of inauspicious stars
From this world-wearied flesh. Eyes, look your last.
Arms, take your last embrace. And, lips, O you
The doors of breath, seal with a righteous kiss
A dateless bargain to engrossing death.
Come, bitter conduct, come, unsavoury guide.
Thou desperate pilot, now at once run on
The dashing rocks thy seasick, weary bark.
Here’s to my love! O true apothecary,
Thy drugs are quick. Thus with a kiss I die.

The full list of soliloquies in Romeo and Juliet

More Resources on Soliloquy in Romeo and Juliet