Get LitCharts A+
LitCharts assigns a color and icon to each theme in A Clockwork Orange, which you can use to track the themes throughout the work.

Burgess’s malevolent protagonist is humanized, somewhat, by his reverent appreciation for the fine arts. Even though Alex is a bloodthirsty sociopath and a public menace, he is not utterly nihilistic. The sound of his favorite classical music seems to induce a more humane, respectful temperament in him. For example, when Dim behaves boorishly in a diner while a girl sings nearby, Alex punches him and reprimands him harshly. This altercation precipitates the droogs’ betrayal of Alex. In this way, Alex’s reverence for music ends up distancing him from his inhumane lifestyle as well as his inhumane tendencies.

Accordingly, when the Reclamation Treatment deprives Alex of the fundamental human characteristic of free will, he is also robbed of his fundamental human ability to treasure music. When Alex hears music after being administered the treatment, it causes him so much anguish that he attempts suicide. “I slooshied [listened] for two seconds in like interest and joy, but then it all came over me, the start of the pain and the sickness, and I began to groan deep down in my keeshkas [guts],” he narrates. This scene demonstrates that art taps into the same fundamental aspect of the human psyche as the violence Alex was conditioned to abhor. Humanity is a complicated concept in Burgess’s novel: it is simultaneously the best and the worst in Alex. The free will that compels him to murder and rape is also what fosters his earnest, edifying esteem for masterful art. Without this free will, Alex is a clockwork man—which, it seems, is hardly a man at all. 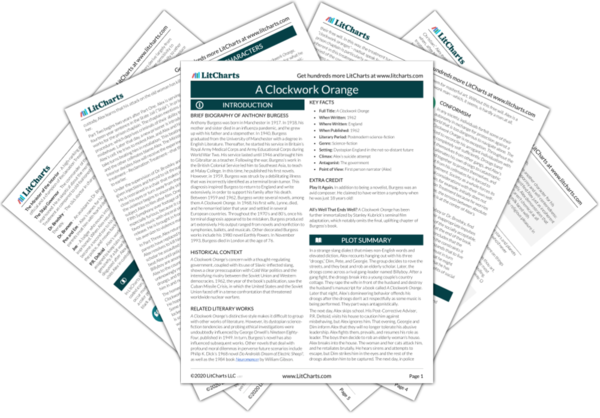 Art and Humanity Quotes in A Clockwork Orange

Below you will find the important quotes in A Clockwork Orange related to the theme of Art and Humanity.
Part 1, Chapter 3 Quotes

He’d taken a big snotty tashtook from his pocket and was mopping the red flow puzzled, keeping on looking at it frowning as if he thought that blood was for other vecks and not for him. It was like he was singing blood to make up for his vulgarity when that devotchka was singing music. But that devotchka was smecking away ha ha ha now with her droogs at the bar, her red rot working and her zoobies ashine, not having noticed Dim’s filthy vulgarity. It was me really Dim had done wrong to.

Oh, bliss, bliss and heaven. I lay all nagoy to the ceiling, my gulliver on my rookers on the pillow, glazzies closed, rot open in bliss, slooshying the sluice of lovely sounds. Oh, it was gorgeousness and gorgeosity made flesh. The trombones crunched redgold under my bed, and behind my gulliver the trumpets three-wise silverflamed, and there by the door the timps rolling through my guts and out again crunched like candy thunder. Oh, it was wonder of wonders. And then, a bird of like rarest spun heavenmetal, or like silvery wine flowing in a spaceship, gravity all nonsense now, came the violin solo above all the other strings, and those strings were like a cage of silk around my bed. Then flute and oboe bored, like worms of like platinum, into the thick thick toffee gold and silver. I was in such bliss, my brothers.

Stop, you grahzny disgusting sods. It’s a sin, that’s what it is, a filthy unforgivable sin, you bratchnies!... Using Ludwig van like that. He did no harm to anyone. Beethoven just wrote music.

It was that these doctor bratchnies had so fixed things that any music that was like for the emotions would make me sick just like viddying or wanting to do violence. It was because all those violence films had music with them. And I remembered especially that horrible Nazi film with the Beethoven Fifth, last movement. And now here was lovely Mozart made horrible.

You’ve sinned, I suppose, but your punishment has been out of all proportion. They have turned you into something other than a human being. You have no power of choice any longer. You are committed to socially acceptable acts, a little machine capable only of good. And I see that clearly—that business about the marginal conditionings. Music and the sexual act, literature and art, all must be a source now not of pleasure but of pain.

When I woke up I could hear slooshy music coming out of the wall, real gromky, and it was that that had dragged me out of my bit of like sleep. It was a symphony that I knew real horrorshow but had not slooshied for many a year, namely the Symphony Number Three of the Danish veck Otto Skadelig, a very gromky and violent piece, especially in the first movement, which was what was playing now. I slooshied for two seconds in like interest and joy, but then it all came over me, the start of the pain and the sickness, and I began to groan deep down in my keeshkas. And then there I was, me who had loved music so much, crawling off the bed and going oh oh oh to myself and then bang bang banging on the wall creching: “Stop, stop it, turn it off!”

Tomorrow is all like sweet flowers and the turning vonny earth and the stars and the old Luna up there and your old droog Alex all on his oddy knocky seeking like a mate. And all that cal. A terrible grahzny vonny world, really, O my brothers. And so farewell from your little droog. And to all others in this story profound shooms of lipmusic brrrrrr. And they can kiss my shames. But you, O my brothers, remember sometimes thy little Alex that was. Amen. And all that cal. 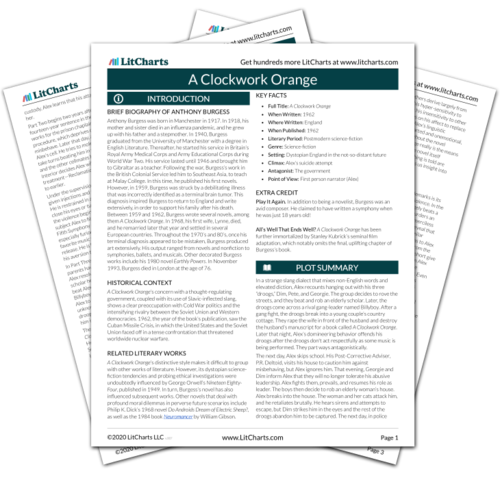 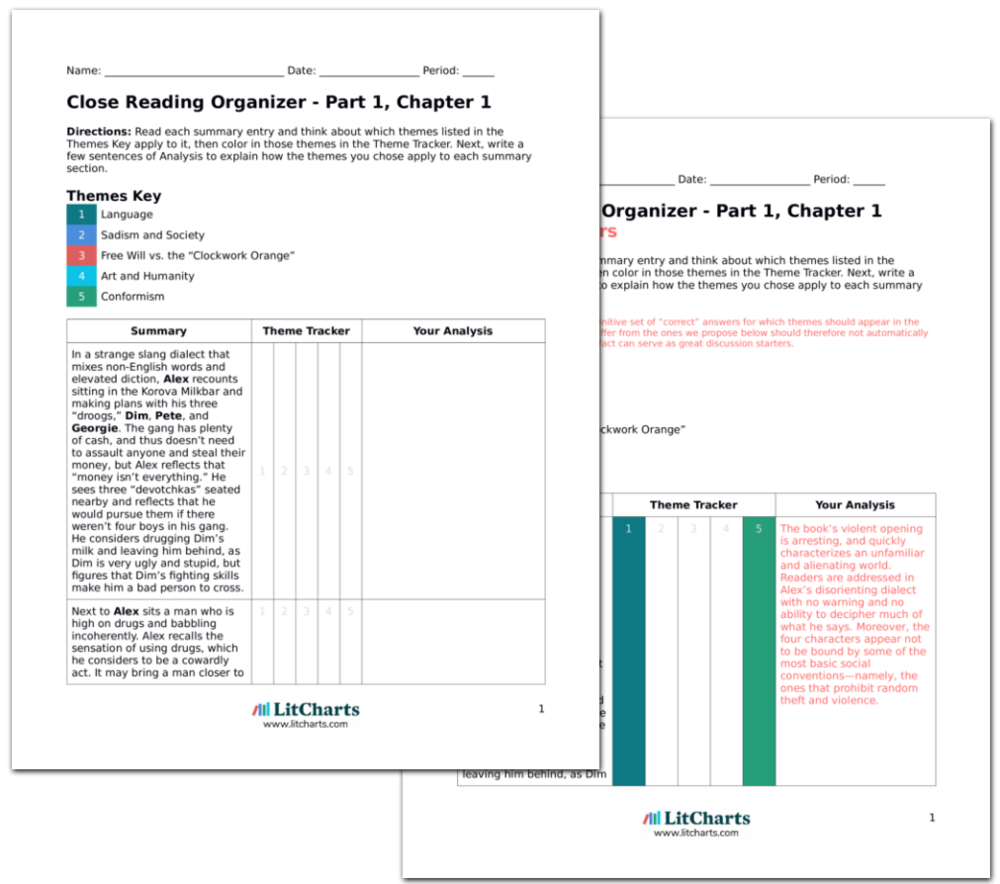