Download this LitChart! (PDF)
Teachers and parents! Struggling with distance learning? Our Teacher Edition on A Complicated Kindness can help.

Welcome to the LitCharts study guide on Miriam Toews's A Complicated Kindness. Created by the original team behind SparkNotes, LitCharts are the world's best literature guides.

A concise biography of Miriam Toews plus historical and literary context for A Complicated Kindness.

A quick-reference summary: A Complicated Kindness on a single page.

In-depth summary and analysis of every part of A Complicated Kindness. Visual theme-tracking, too.

Explanations, analysis, and visualizations of A Complicated Kindness's themes.

Description, analysis, and timelines for A Complicated Kindness's characters.

Explanations of A Complicated Kindness's symbols, and tracking of where they appear.

An interactive data visualization of A Complicated Kindness's plot and themes.

Miriam Toews was born into highly conservative Mennonite community in rural Canada, much like the one her protagonist Nomi inhabits in A Complicated Kindness. At the age of eighteen, Toews left Steinbach to travel the world, working in London and Montreal for several years before moving to Winnipeg and pursuing a Film Studies degree at the University of Manitoba (she later earned a degree in journalism as well). Working on a radio documentary on low-income mothers inspired Toews to write her first novel, Summer of My Amazing Luck, a story of friendship between two young mothers in a Winnipeg housing project. Since then she has written several novels, many based on her family’s departure from the Mennonite community and struggles with mental illness. She lives in Toronto with her partner and mother, and enjoys babysitting her two grandchildren.
Get the entire A Complicated Kindness LitChart as a printable PDF.
"My students can't get enough of your charts and their results have gone through the roof." -Graham S.
Download 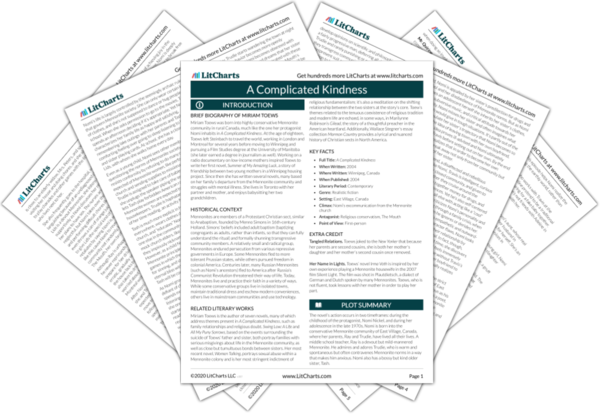 Historical Context of A Complicated Kindness

Mennonites are members of a Protestant Christian sect, similar to Anabaptism, founded by Menno Simons in 16th-century Holland. Simons’ beliefs included adult baptism (baptizing congregants as adults, rather than infants, so that they can fully understand the ritual) and formally shunning transgressive community members. A relatively small and radical group, Mennonites endured persecution from various repressive governments in Europe. Some Mennonites fled to more tolerant Prussian states, while others pursued freedom in colonial America. Centuries later, many Russian Mennonites (such as Nomi’s ancestors) fled to America after Russia’s Communist Revolution threatened their way of life. Today, Mennonites live and practice their faith in a variety of ways. While some conservative groups live in isolated towns, maintain traditional dress and eschew modern conveniences, others live in mainstream communities and use technology.

Other Books Related to A Complicated Kindness

Miriam Toews is the author of seven novels, many of which address themes present in A Complicated Kindness, such as family relationships and religious doubt. Swing Low: A Life and All My Puny Sorrows, based on the events surrounding the suicide of Toews’ father and sister, both portray families with serious misgivings about life in the Mennonite community, as well as close but tumultuous bonds between sisters. Her most recent novel, Women Talking, portrays sexual abuse within a Mennonite colony and is her most stringent indictment of religious fundamentalism; it’s also a meditation on the shifting relationship between the two sisters at the story’s core. Toew’s themes related to the tenuous coexistence of religious tradition and modern life are echoed, in some ways, in Marilynne Robinson’s Gilead, the story of a thoughtful preacher in the American heartland. Additionally, Wallace Stegner’s essay collection Mormon Country provides a lyrical and nuanced history of Christian sects in North America.
Key Facts about A Complicated Kindness

Extra Credit for A Complicated Kindness

Her Name in Lights. Toews’ novel Irma Voth is inspired by her own experience playing a Mennonite housewife in the 2007 film Silent Light. The film was shot in Plautdietsch, a dialect of German and Dutch spoken by many Mennonites. Toews, who is not fluent, took lessons with her mother in order to play her part. 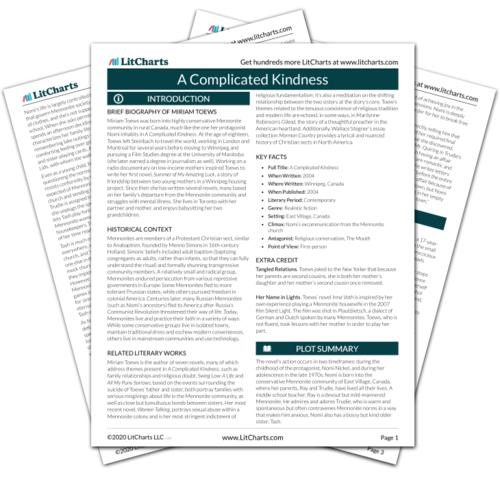 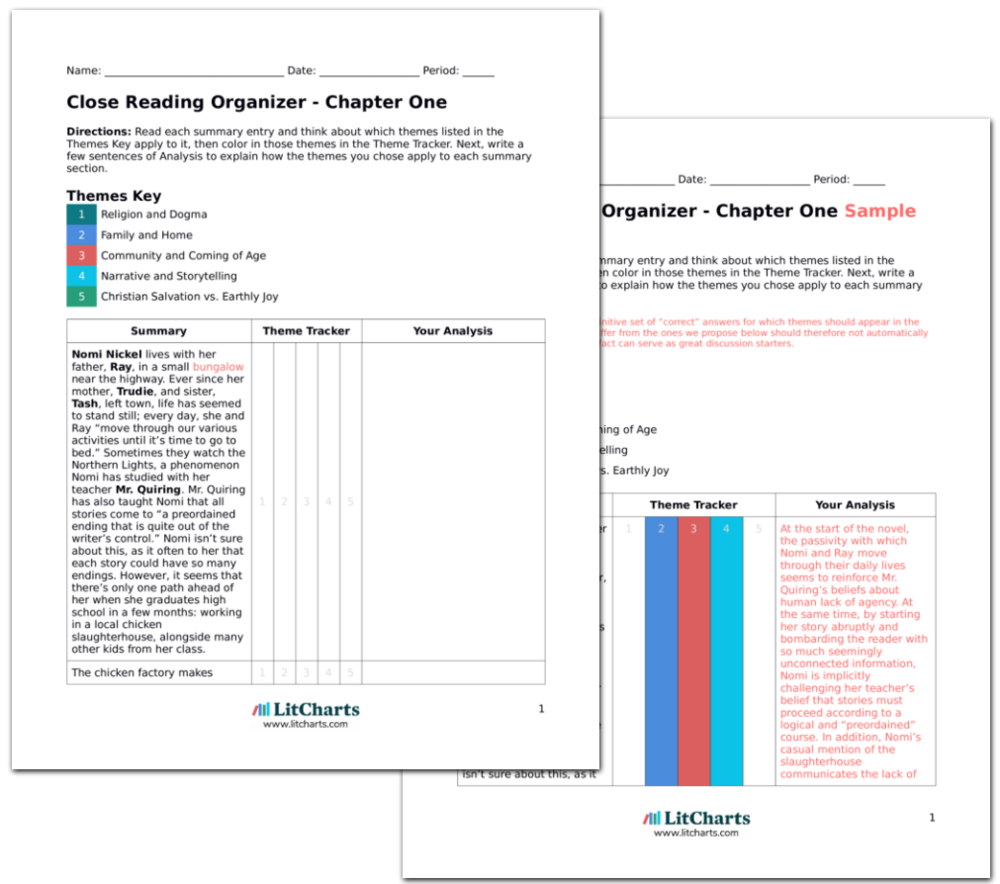