Download this LitChart! (PDF)
Teachers and parents! Struggling with distance learning? Our Teacher Edition on A Confederacy of Dunces can help.

Welcome to the LitCharts study guide on John Kennedy Toole's A Confederacy of Dunces. Created by the original team behind SparkNotes, LitCharts are the world's best literature guides.

A Confederacy of Dunces: Introduction

A concise biography of John Kennedy Toole plus historical and literary context for A Confederacy of Dunces.

A Confederacy of Dunces: Plot Summary

A quick-reference summary: A Confederacy of Dunces on a single page.

In-depth summary and analysis of every chapter of A Confederacy of Dunces. Visual theme-tracking, too.

A Confederacy of Dunces: Themes

Explanations, analysis, and visualizations of A Confederacy of Dunces's themes.

A Confederacy of Dunces: Quotes

A Confederacy of Dunces's important quotes, sortable by theme, character, or chapter.

A Confederacy of Dunces: Characters

Description, analysis, and timelines for A Confederacy of Dunces's characters.

A Confederacy of Dunces: Symbols

Explanations of A Confederacy of Dunces's symbols, and tracking of where they appear.

A Confederacy of Dunces: Theme Wheel

An interactive data visualization of A Confederacy of Dunces's plot and themes.

John Kennedy Toole was born in 1937 in New Orleans, Louisiana. Toole was a bright child and his mother, Thelma Ducoing Toole, had extremely high hopes for his future success. Throughout school, Toole excelled academically and wrote his first novel, The Neon Bible, when he was only 16. At 17, Toole received a scholarship to attend Tulane University, where he studied English Literature. During his time at university, Toole worked as an editor for the college newspaper and spent a lot of time in the French Quarter of New Orleans with his friends, who were musicians. The area was considered disreputable and Toole’s relatives disliked him spending time there. Toole later completed a Master’s degree at Columbia University in New York and was then offered a job as an assistant professor at the University of Southwestern Louisiana. Toole then took a job as a professor at Hunter University in New York. He was drafted into the army in 1961 and stationed in Puerto Rico, where he taught English to the Spanish recruits. Toole was soon promoted and given a private office, where he began work on A Confederacy of Dunces. He completed the novel after his return to New Orleans and tried to get it published several times without success. Toole took a teaching position at a Catholic college, where he was known as a popular and witty professor. Unfortunately, after Dunces was rejected, Toole entered a period of mental ill-health and took his own life in 1969 at the age of 31. Toole’s mother had the novel published in 1980, after several unsuccessful attempts. Toole was posthumously awarded a Pulitzer Prize in 1981.
Get the entire A Confederacy of Dunces LitChart as a printable PDF.
"My students can't get enough of your charts and their results have gone through the roof." -Graham S.
Download 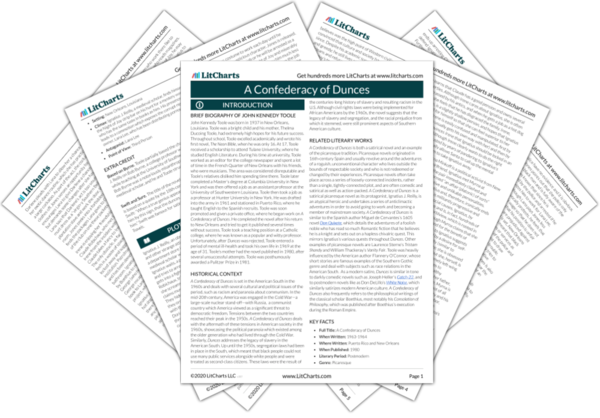 Historical Context of A Confederacy of Dunces

A Confederacy of Dunces is set in the American South in the 1960s and deals with several cultural and political issues of the period, such as racism and paranoia about communism. In the mid-20th century, America was engaged in the Cold War—a large-scale nuclear stand-off—with Russia,  a communist country which America viewed as a significant threat to democratic freedom. Tensions between the two countries reached their peak in the 1950s. A Confederacy of Dunces deals with the aftermath of these tensions in American society in the 1960s, showcasing the political paranoia which existed among the older generation who had lived through the Cold War. Similarly, Dunces addresses the legacy of slavery in the American South. Up until the 1950s, segregation laws had been in place in the South, which meant that black people could not use many public services alongside white people and were treated as second-class citizens. These laws were the result of the centuries-long history of slavery and resulting racism in the U.S. Although civil rights laws were being implemented for African Americans by the 1960s, the novel suggests that the legacy of slavery and segregation, and the racial prejudice from which it stemmed, were still prominent aspects of Southern American culture.

Other Books Related to A Confederacy of Dunces

A Confederacy of Dunces is both a satirical novel and an example of the picaresque tradition. Picaresque novels originated in 16th-century Spain and usually revolve around the adventures of a roguish, unconventional character who lives outside the bounds of respectable society and who is not redeemed or changed by their experiences. Picaresque novels often take place across a series of loosely-connected incidents, rather than a single, tightly-connected plot, and are often comedic and satirical as well as action-packed. A Confederacy of Dunces is a satirical picaresque novel as its protagonist, Ignatius J. Reilly, is an atypical heroic and undertakes a series of anticlimactic adventures in order to avoid going to work and becoming a member of mainstream society. A Confederacy of Dunces is similar to the Spanish author Miguel de Cervantes’s 1605 novel Don Quixote, which details the adventures of a foolish noble who has read so much Romantic fiction that he believes he is a knight and sets out on a hapless chivalric quest. This mirrors Ignatius’s various quests throughout Dunces. Other examples of picaresque novels are Laurence Sterne’s Tristam Shandy and William Thackeray’s Vanity Fair. Toole was heavily influenced by the American author Flannery O’Connor, whose short stories are famous examples of the Southern Gothic genre and deal with subjects such as race relations in the American South.  As a modern satire, Dunces is similar in tone to darkly comedic novels such as Joseph Heller’s Catch-22, and to postmodern novels like as Don DeLillo’s White Noise, which similarly satirizes modern American culture. A Confederacy of Dunces also frequently refers to the philosophical writings of the classical scholar Boethius, most notably his Consolation of Philosophy, which was published after Boethius’s execution during the Roman Empire.
Key Facts about A Confederacy of Dunces

Extra Credit for A Confederacy of Dunces

Based on Byrne. Toole partially based the character of Ignatius J. Reilly on Bob Byrne, a college professor whom he befriended while teaching at the University of Southwestern Louisiana. Bob Byrne was a notoriously misanthropic, anti-modern medieval scholar, and he and Toole struck up a friendship.

Swift and Sure. The title of the novel, A Confederacy of Dunces, is based on a quote by the 18th-century Irish writer Jonathan Swift: “When a true genius appears in the world, you may know him by this sign, that the dunces are all in confederacy against him.” Swift was famous for satirical works such as Gulliver’s Travels. 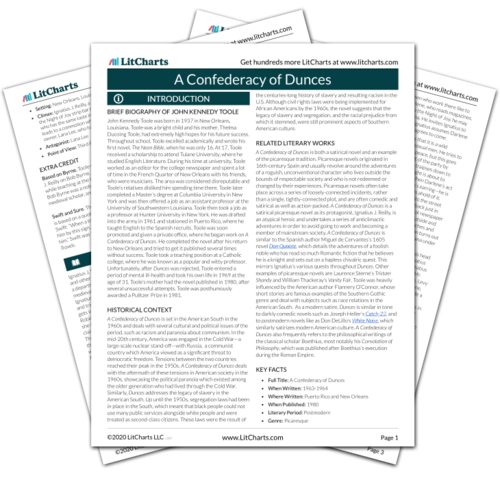 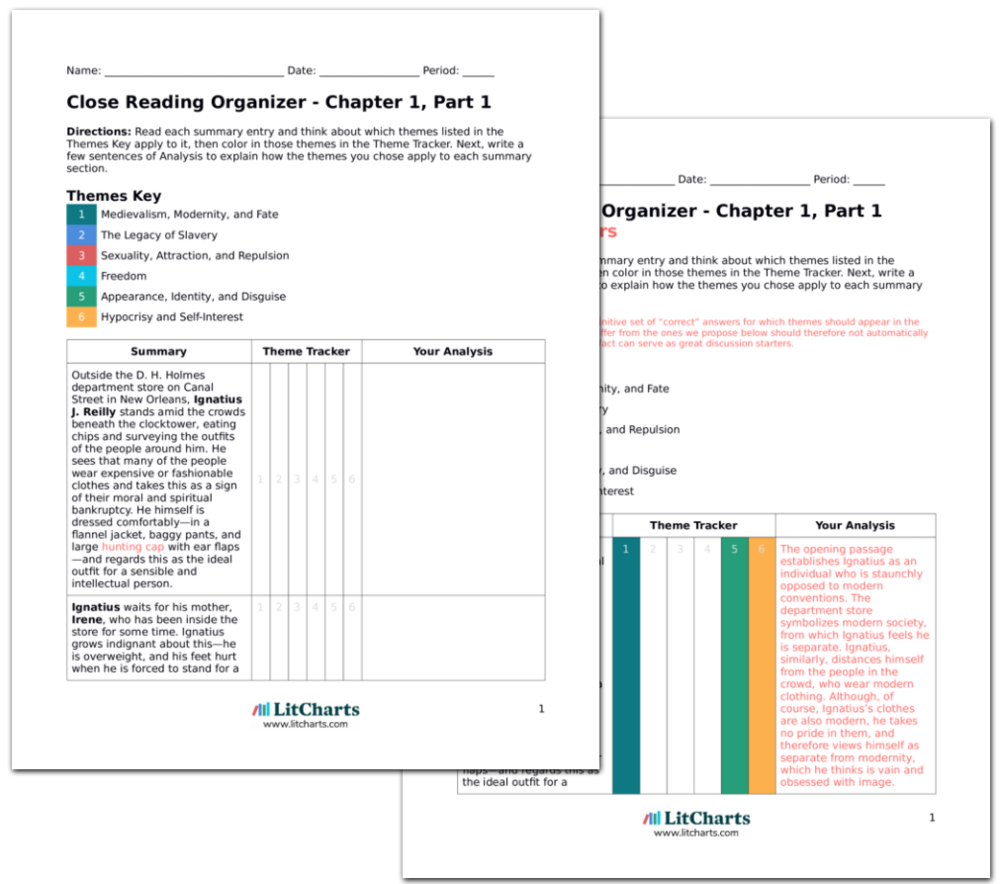