Get LitCharts A+
Chivalry is the name of the religious, social, and moral codes of medieval knighthood. Chivalric ideals reached their highest development in the 12th and 13th centuries, largely in conjunction with the Crusades (a series of military campaigns in which European forces attempted to capture and hold the Holy Land—modern day Israel, Syria, and Jordan) and the popularity of French literature celebrating Arthurian mythology and the Knights of the Round Table. In A Connecticut Yankee in King Arthur’s Court, Arthur and knights like Sir Kay, Sir Gawain, Marhaus, and Sir Launcelot demonstrate their chivalric values when they display courage, patriotism, religious belief, and loyalty to their king.

Chivalry Quotes in A Connecticut Yankee in King Arthur’s Court

The A Connecticut Yankee in King Arthur’s Court quotes below are all either spoken by Chivalry or refer to Chivalry. For each quote, you can also see the other terms and themes related to it (each theme is indicated by its own dot and icon, like this one:

Meantime, it was getting hotter and hotter in there. You see, the sun was beating down and warming up the iron more and more all the time. Well, when you are hot, that way, every little thing irritates you. When I trotted, I rattled like a crate of dishes, and that annoyed me; and moreover I couldn’t seem to stand that shield slatting and banging, now about my breast, now around my back; and if I dropped into a walk my joints creaked and screeched in that wearisome way a wheelbarrow does, and as we didn’t create any breeze at that gait, I was like to get fried in that stove; and besides, the quieter you went the heavier the iron settled down on you and the more and more tons you seemed to weigh every minute.

La Cote was much depressed, for he had scored here the worst failure of his campaign. He had not worked off a cake; yet he had tried all the tricks of the trade, even to the washing of a hermit; but the hermit died. This was indeed a bad failure, for this animal would now be dubbed a martyr, and would take his place among the saints of the Roman calendar. Thus made he his moan, this poor Sir La Cote Male Taile, and sorrowed passing sore. And so my heart bled for him, and I was moved to comfort and stay him. Wherefore I said—

“Forbear to grieve, fair knight, for this is not a defeat. We have brains you and I; and for such as have brains there are no defeats, but only victories.”

The sun rose presently and sent its unobstructed splendors over the land, and we saw a prodigious host moving slowly toward us, with the steady drift and aligned front of a wave of the sea. Nearer and nearer it came, and more and more sublimely imposing became its aspect; yes, all England were there, apparently. Soon we could see the innumerable banners fluttering, and then the sun struck the sea of armor and set it all aflash. Yes, it was a fine sight; I hadn’t ever seen anything to beat it.

The thirteen gatlings began to vomit death into the fated ten thousand. They halted, they stood their ground a moment against that withering deluge of fire, then they broke, faced about and swept toward the ditch like chaff before a gale. A full forth part of their force never reached the top of the lofty embankment; the three fourths reached it and plunged over—to death by drowning.

Within ten short minutes after we had opened fire, armed resistance was totally annihilated, the campaign was ended, we fifty-four were masters of England! Twenty-five thousand men lay dead around us. 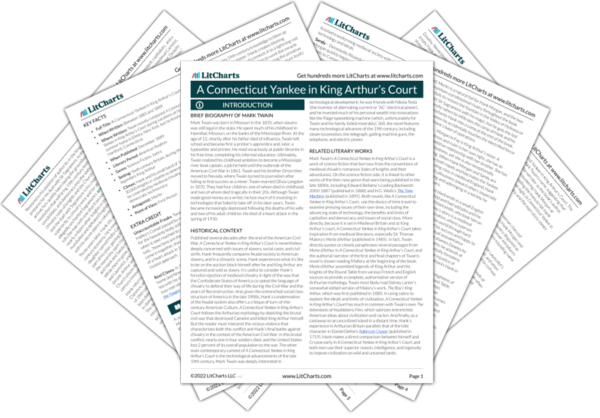 The timeline below shows where the term Chivalry appears in A Connecticut Yankee in King Arthur’s Court. The colored dots and icons indicate which themes are associated with that appearance.

...that the bullet hole in a suit of armor probably happened after the age of chivalry, the stranger mutters that the real story is he shot the knight himself. The narrator... (full context)

...Soap.” This is one of Hank’s civilizing projects. He hopes that the ads will undermine chivalry by making the knights look silly, and that if he can introduce a basic idea... (full context)

...else knows, however, is that it’s also a contest between “hard unsentimental common sense” and chivalry. Hank will either destroy the institution of the knighthood—or the institution will destroy Hank. For... (full context)

...is dead, it is Hank’s right to offer a new challenge, and he challenges “the chivalry of England” to fight him at once. Instantly, hundreds of knights clamber into their saddles.... (full context)

...in secret. He publishes an open challenge to any knight, but after three years, the chivalric class has “shut up” instead of “put[ting] up.” Within three years, the kingdom is establishing... (full context)

...of his latest experiment: a baseball team. He is trying to redirect the martial and chivalric impulses of the upper classes into athletic competition, and the teams are entirely composed of... (full context)

...Hank knows that there are no reinforcements and that this is the “last stand of chivalry in England.” He issues a congratulatory proclamation to his army for their “brief” and “glorious”... (full context)

To prepare for the next attack from the ignorant forces of chivalry, Hank has some of the boys dig a ditch to divert a nearby stream behind... (full context) 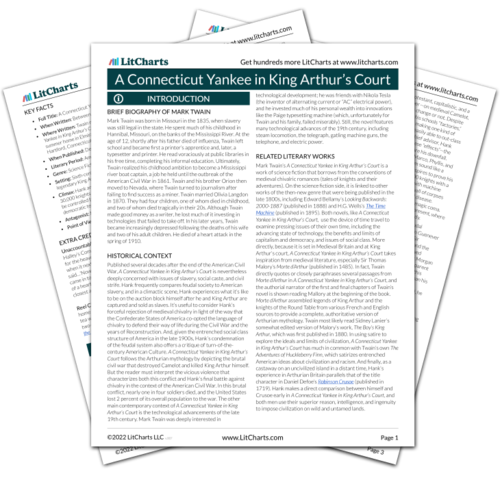 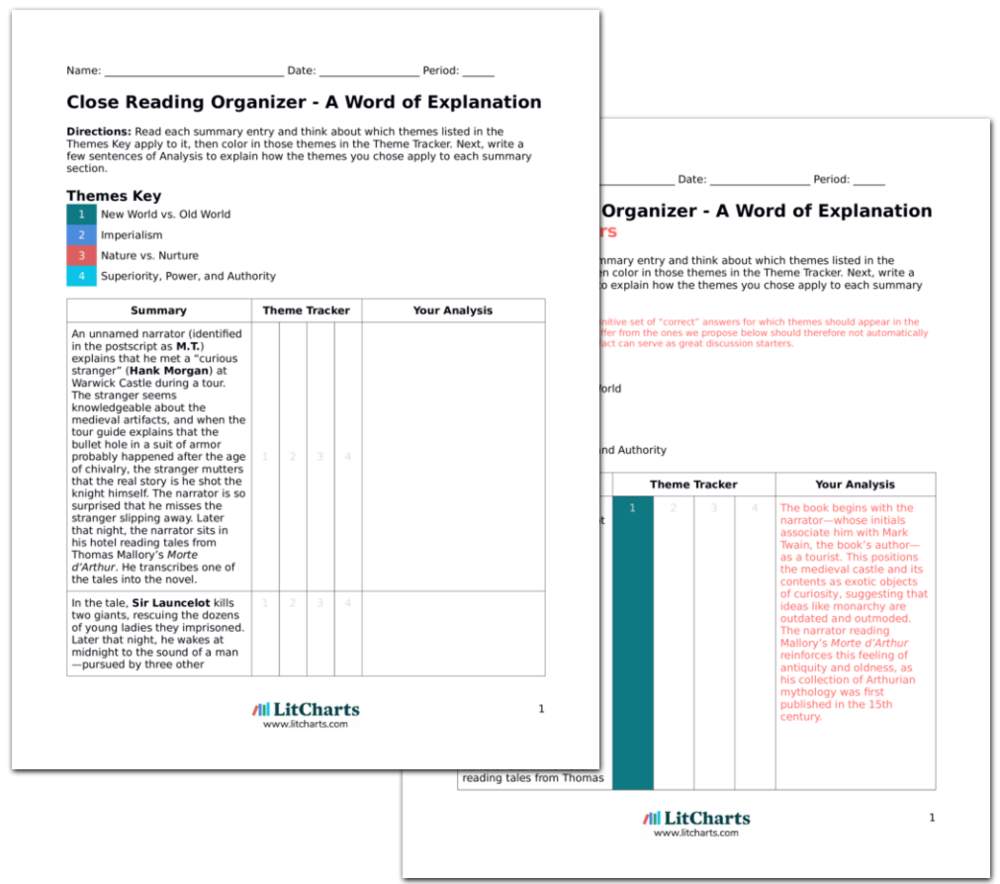