Download this LitChart! (PDF)
Teachers and parents! Struggling with distance learning? Our Teacher Edition on A Haunted House can help.

Welcome to the LitCharts study guide on Virginia Woolf's A Haunted House. Created by the original team behind SparkNotes, LitCharts are the world's best literature guides.

A concise biography of Virginia Woolf plus historical and literary context for A Haunted House.

A quick-reference summary: A Haunted House on a single page.

In-depth summary and analysis of every of A Haunted House. Visual theme-tracking, too.

Explanations, analysis, and visualizations of A Haunted House's themes.

A Haunted House's important quotes, sortable by theme, character, or .

Description, analysis, and timelines for A Haunted House's characters.

Explanations of A Haunted House's symbols, and tracking of where they appear.

An interactive data visualization of A Haunted House's plot and themes.

Virginia Stephen was born in 1882 to the author, historian and critic Leslie Stephen and his second wife, Julia Duckworth, a model for the Pre-Raphaelite movement. She had three siblings, including the painter Vanessa Bell, but lost most of her family early on in her life, including her mother, her stepsister, her father, and her brother Thoby. She married Leonard Woolf in 1912, and her first novel, The Voyage Out, was published in 1915. With her husband, she founded Hogarth Press, a small press intended to publish unconventional and experimental literature (including Woolf's novels). Between 1922 and 1941, she had a long-term relationship with writer Vita Sackville-West, during which she published three more novels and a number of essays. However, her mental health worsened and she died by suicide in 1941, drowning herself in a river near her home. Her last novel, Between the Acts, was published posthumously.
Get the entire A Haunted House LitChart as a printable PDF.
"My students can't get enough of your charts and their results have gone through the roof." -Graham S.
Download 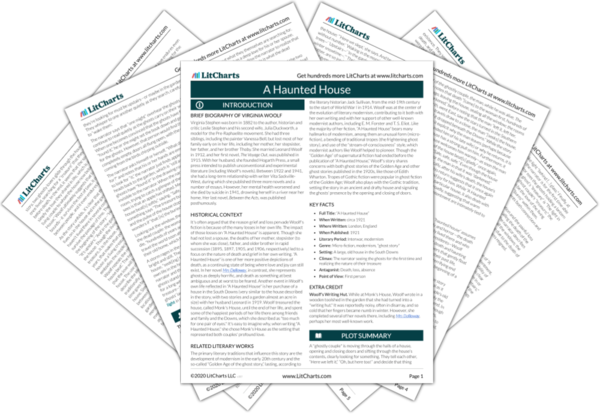 Historical Context of A Haunted House

It's often argued that the reason grief and loss pervade Woolf's fiction is because of the many losses in her own life. The impact of those losses on "A Haunted House" is apparent. Though she had not lost a spouse, the deaths of her mother, stepsister (to whom she was close), father, and older brother in rapid succession (1895, 1897, 1905, and 1906, respectively) led to a focus on the nature of death and grief in her own writing. "A Haunted House" is one of her more positive depictions of death, as a continuing state of being where love and joy can still exist. In her novel Mrs Dalloway, in contrast, she represents ghosts as deeply horrific, and death as something at best ambiguous and at worst to be feared. Another event in Woolf's own life reflected in "A Haunted House" is her purchase of a house in the South Downs (very similar to the house described in the story, with two stories and a garden almost an acre in size) with her husband Leonard in 1919. Woolf treasured the house, called Monk's House, until the end of her life, and spent some of the happiest periods of her life there among friends and family and the Downs, which she described as "too much for one pair of eyes." It's easy to imagine why, when writing "A Haunted House," she chose Monk's House as the setting that represented both couples' profound love.

Other Books Related to A Haunted House

The primary literary traditions that influence this story are the development of modernism in the early 20th century and the so-called “Golden Age of the ghost story,” lasting, according to the literary historian Jack Sullivan, from the mid-19th century to the start of World War I in 1914. Woolf was at the center of the evolution of literary modernism, contributing to it both with her own writing and with her support of other well-known modernist authors, including E. M. Forster and T. S. Eliot. Like the majority of her fiction, “A Haunted House” bears many hallmarks of modernism, among them an unusual form (micro-fiction), a bending of traditional tropes (the frightening ghost story), and use of the “stream-of-consciousness” style, which modernist authors like Woolf helped to pioneer. Though the “Golden Age” of supernatural fiction had ended before the publication of “A Haunted House,” Woolf's story shares concerns with both ghost stories of the Golden Age and other ghost stories published in the 1920s, like those of Edith Wharton. Tropes of Gothic fiction were popular in ghost fiction of the Golden Age; Woolf also plays with the Gothic tradition, setting the story in an ancient and drafty house and signaling the ghosts' presence by the opening and closing of doors.
Key Facts about A Haunted House

Extra Credit for A Haunted House

Woolf's Writing Hut. While at Monk's House, Woolf wrote in a wooden toolshed in the garden that she had turned into a "writing hut." It was reportedly noisy, often in disarray, and so cold that her fingers became numb in winter. However, she completed several of her novels there, including Mrs Dalloway, perhaps her most well-known work. 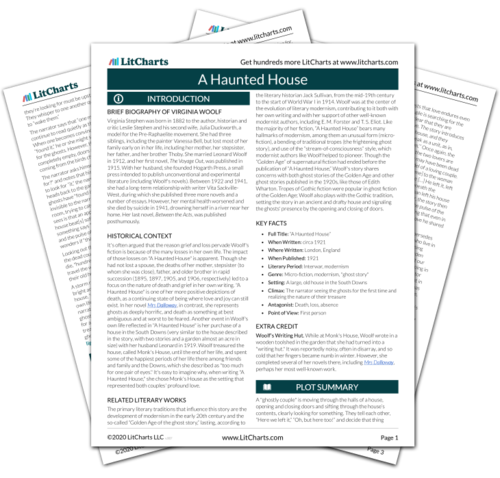 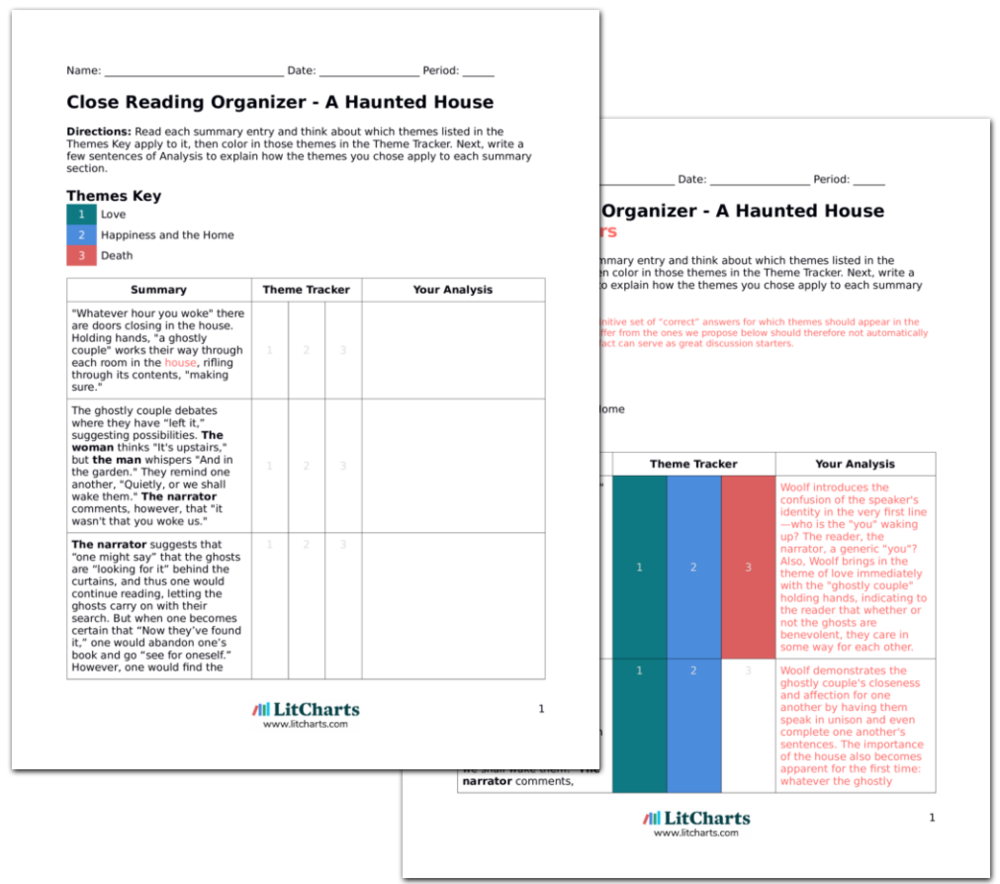