Download this LitChart! (PDF)
Teachers and parents! Struggling with distance learning? Our Teacher Edition on A Little Cloud can help.

Welcome to the LitCharts study guide on James Joyce's A Little Cloud. Created by the original team behind SparkNotes, LitCharts are the world's best literature guides.

A concise biography of James Joyce plus historical and literary context for A Little Cloud.

A quick-reference summary: A Little Cloud on a single page.

In-depth summary and analysis of every of A Little Cloud. Visual theme-tracking, too.

Explanations, analysis, and visualizations of A Little Cloud's themes.

A Little Cloud's important quotes, sortable by theme, character, or .

Description, analysis, and timelines for A Little Cloud's characters.

Explanations of A Little Cloud's symbols, and tracking of where they appear.

An interactive data visualization of A Little Cloud's plot and themes.

A key voice in Modernist writing, James Joyce stretched the boundaries of subject matter and style in his novels and short stories, leaving a lasting impact on fiction writing. Born and raised in Dublin, Ireland, Joyce attended Jesuit schools and later graduated from University College Dublin despite his family’s poverty. Joyce was raised in the Catholic Church but he lost his religious faith early in life—a factor in his later work’s criticism of strict religious piety and hypocrisy. In 1904 he met his life companion, Nora Barnacle, whom he lived with for many years before marrying in 1931. In 1904 the couple emigrated to continental Europe and lived the rest of their lives there, only returning to Ireland for brief visits. Before achieving success as a fiction writer, Joyce worked as an English teacher in Italy, Switzerland, and Paris. During this time, Joyce wrote Dubliners and Portrait of the Artist as a Young Man and finished his major work Ulysses. This groundbreaking novel was patterned on Homer’s Odyssey and garnered Joyce fame and notoriety due to its frank subject matter, stream-of-consciousness style, shifts in points of view, and non-chronological narration. Joyce’s poor eyesight forced him to wear an eyepatch and later in life to undergo nine operations to repair his vision. In 1941, after surgery for an ulcer, Joyce died at 58.
Get the entire A Little Cloud LitChart as a printable PDF.
"My students can't get enough of your charts and their results have gone through the roof." -Graham S.
Download 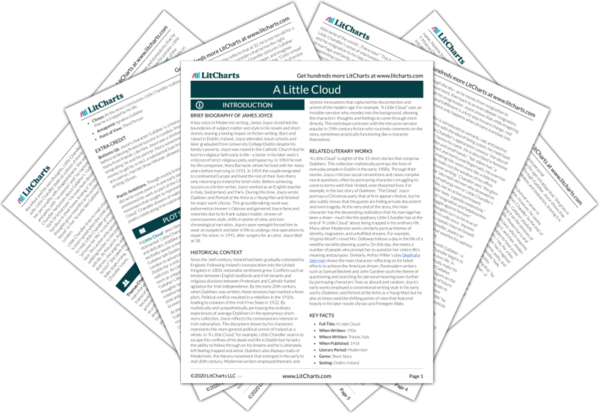 Historical Context of A Little Cloud

Since the 16th century, Ireland had been gradually colonized by England. Following Ireland’s incorporation into the United Kingdom in 1800, nationalist sentiment grew. Conflicts such as tension between English landlords and Irish tenants and religious divisions between Protestant and Catholic fueled agitation for Irish independence. By the early 20th century, when Dubliners was written, these tensions had reached a fever pitch. Political conflict resulted in a rebellion in the 1910s, leading to creation of the Irish Free State in 1922. By realistically and sympathetically portraying the ordinary experiences of average Dubliners in the eponymous short-story collection, Joyce reflects the contemporary interest in Irish nationalism. The discontent shown by his characters represents the more general political unrest of Ireland as a whole. In “A Little Cloud,” for example, Little Chandler yearns to escape the confines of his dead-end life in Dublin but he lacks the ability to follow through on his dreams and he is ultimately left feeling trapped and alone. Dubliners also displays traits of Modernism, the literary movement that emerged in the early to mid-20th century. Modernist writers employed thematic and stylistic innovations that captured the disconnection and unrest of the modern age. For example, “A Little Cloud” uses an invisible narrator who recedes into the background, allowing the characters’ thoughts and feelings to come through more directly. This technique contrasts with the intrusive narrator popular in 19th-century fiction who routinely comments on the story, sometimes practically functioning like a character themselves.

Other Books Related to A Little Cloud

“A Little Cloud” is eighth of the 15 short stories that comprise Dubliners. This collection realistically portrays the lives of everyday people in Dublin in the early 1900s. Through their stories, Joyce criticizes social conventions and raises complex moral questions, often by portraying characters struggling to come to terms with their limited, even thwarted lives. For example, in the last story of Dubliners, “The Dead,” Joyce portrays a Christmas party that at first appears festive, but he also subtly shows that the guests are hiding private discontent and even tragedy. At the very end of the story, the main character has the devastating realization that his marriage has been a sham—much like the epiphany Little Chandler has at the end of “A Little Cloud” about being trapped in his ordinary life. Many other Modernist works similarly portray themes of identity, stagnation, and unfulfilled dreams. For example, Virginia Woolf’s novel Mrs. Dalloway follows a day in the life of a wealthy socialite planning a party. On this day, she meets a number of people who prompt her to question her entire life’s meaning and purpose. Similarly, Arthur Miller’s play Death of a Salesman shows the main character reflecting on his failed efforts to achieve the American dream. Postmodern writers such as Samuel Beckett and John Gardner push the theme of questioning and searching for personal meaning even further by portraying characters’ lives as absurd and random. Joyce’s early works employed a conventional writing style in his early works (Dubliners and Portrait of the Artist as a Young Man) but he also at times used the shifting points of view that featured heavily in his later novels Ulysses and Finnegans Wake.
Key Facts about A Little Cloud

Extra Credit for A Little Cloud

Bottoms Up. Joyce’s character Gallaher is a heavy drinker who, before achieving financial success in London, frequently took loans from friends. Like him, Joyce was a drinker—after emigrating, he and his partner, Nora, sometimes had to borrow money to get by. In fact, a substantial loan from a prominent arts patron, Harriet Shaw Weaver, allowed Joyce to finish writing Ulysses.

Poetic Ambitions. Though mostly known for his fiction, Joyce did write some poetry. In one early poem, “The Holy Office,” he positioned his work as part of the Celtic Revival, an artistic movement that sought to represent Irish culture. In “A Little Cloud,” Chandler dreams of making his mark in this trend of poetry celebrating Irish nationalism. 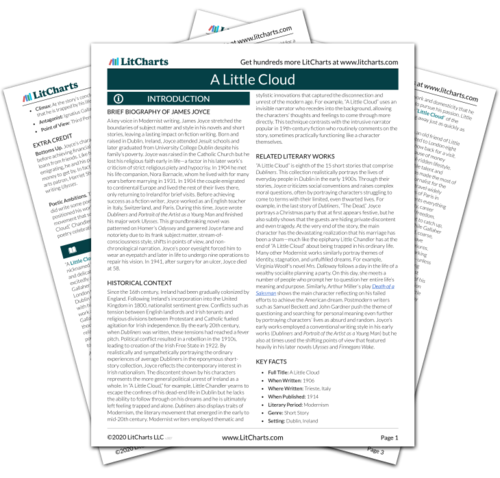 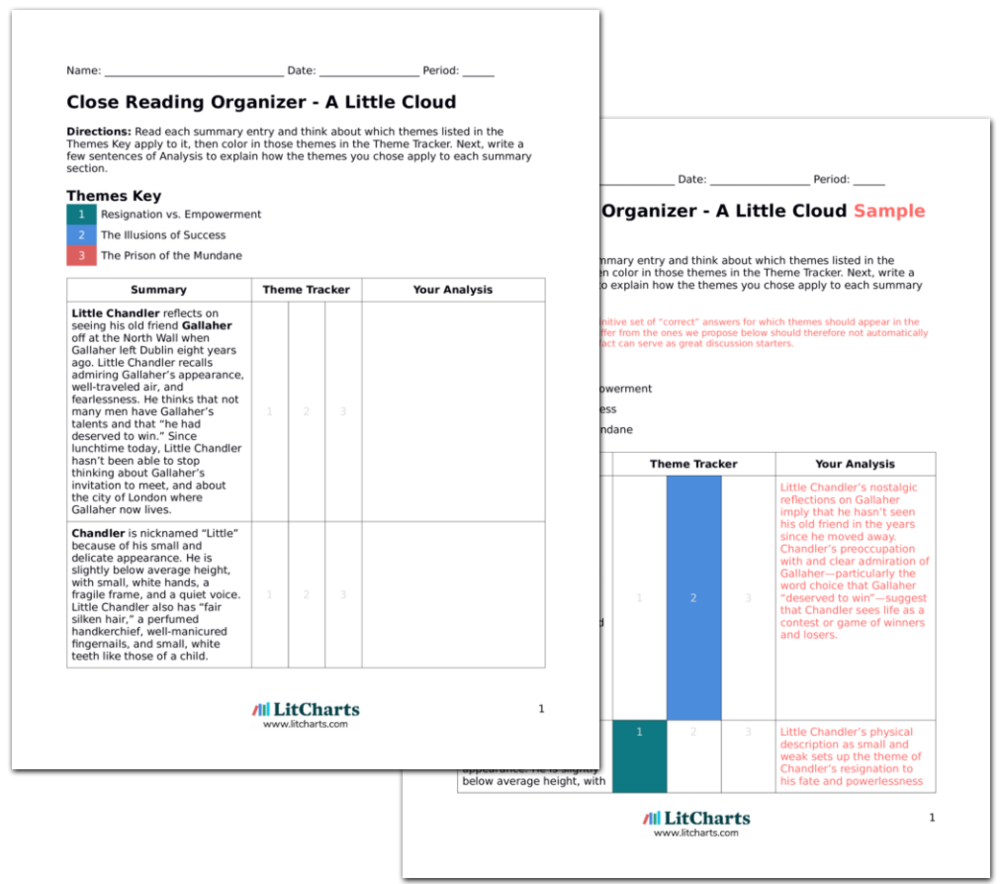