Get LitCharts A+
Anita is Rune's husband and lives two houses down from Ove. She and Rune moved into the neighborhood at the same time that Ove and Sonja did, and she and Sonja became quick friends. Anita and Rune had one son, though they did want to have more children. When the story takes place, Anita has spent the past two years fighting the city council to keep Rune, who is struggling with Alzheimer’s, from being put into assisted living. Ove describes her as tiny and ashy and certainly not up to the task of caring for her husband by herself.

The A Man Called Ove quotes below are all either spoken by Anita or refer to Anita. For each quote, you can also see the other characters and themes related to it (each theme is indicated by its own dot and icon, like this one:

). Note: all page numbers and citation info for the quotes below refer to the Washington Square Press edition of A Man Called Ove published in 2015.
Chapter 28 Quotes

Unlock with LitCharts A+
Get the entire A Man Called Ove LitChart as a printable PDF.
"My students can't get enough of your charts and their results have gone through the roof." -Graham S.
Download 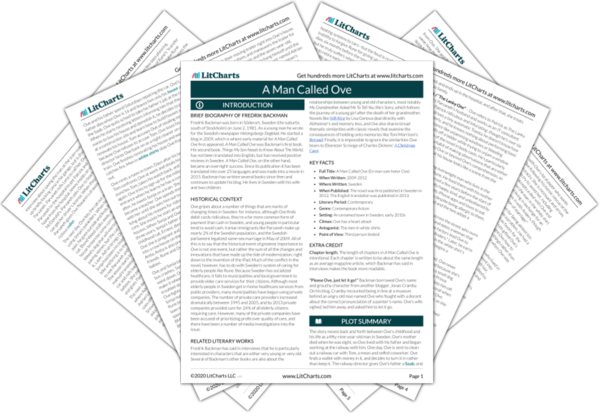 The timeline below shows where the character Anita appears in A Man Called Ove. The colored dots and icons indicate which themes are associated with that appearance.

...bacon. On the other side of Jimmy lives Rune, Ove's enemy. Rune and his wife, Anita, moved in on the same day that Ove and Sonja did. Rune drove a Volvo... (full context)

...to his shed. As Patrick runs to help Ove with the ladder, Ove notices that Anita is also in his yard. He decides to ignore her and hands Patrick a case... (full context)

Ove turns his attention to Anita, who he thinks has gotten exceptionally old since he last saw her. She explains that... (full context)

Ove suggests that Anita should've thought about needing help like this when she staged the coup d'état in the... (full context)

...open front door and notices marks on Ove's floor. He asks if Ove cycles inside. Anita begins to explain something about Sonja, but Ove furiously cuts her off and tells the... (full context)

...his drill away. He grabs his watering can out of the shed and knocks on Anita and Rune's door. When Anita happily opens it for Ove, he grumpily asks where the... (full context)

Ove angrily walks to where the Škoda was parked in front of Rune and Anita's house. He picks up cigarette butts that the driver threw on the ground. Anita appears,... (full context)

...Ove looks over the parking area and thinks about his friendship with Rune. Rune and Anita had moved in the same day that Ove and Sonja did, and Sonja and Anita... (full context)

Ove and Rune talked about their wives' raging pregnancy hormones. Anita kept putting the coffee pot in the fridge, while Sonja developed a short temper and... (full context)

...she wanted to get married. They got married at the town hall with Rune and Anita and went out for dinner after. Ove and Rune argued with the waiter about the... (full context)

...prohibited had been run over. Ove fetched his snow shovel and looked at Rune and Anita's house. The cat looked at Ove accusingly, and Ove yelled at the cat that the... (full context)

...for a minute. Rune asks, "Ove?" and smiles. Ove tells Rune he looks old, and Anita appears next to Rune, sounding terrified. She looks small, gray, and as though she's been... (full context)

...huge piece of corrugated iron. Rune smiles and waves at Ove from the window, and Anita tells Ove again that Social Services wants to take Rune away from her. She tells... (full context)

There were good moments in and amongst the conflict where Sonja and Anita were able to get together with Rune and Ove for dinner. When Anita and Rune's... (full context)

...out, Rune bought a sporty BMW with two seats since it was only him and Anita. Ove realized that Rune had given up on having a family. (full context)

The man in the white shirt gets out of his car by Rune and Anita's house as Ove yells at him. The man asks Ove what he's going to do... (full context)

...comes up behind him and tells him that they're going to take Rune away from Anita. Anita appears suddenly and tells Ove that they're coming to get Rune later that week.... (full context)

...if he has heard that the council is picking Rune up today. He explains that Anita has been trying for two years to get more help for Rune and now the... (full context)

...angrier. Mirsad asks Ove if he's okay, and Ove turns and asks Jimmy to confirm Anita's reasons for not wanting to tell Sonja. Ove thinks that Sonja would've been heartbroken to... (full context)

...on for hours. The last straw was when they threw a bottle through Rune and Anita's window. Ove saw Rune with a small bag one night and the next day, the... (full context)

...nine-year-old boy and her new boyfriend, a man with bad breath and a bull neck. Anita and Sonja tried to ignore the shouting they heard coming from the house, but began... (full context)

...that his memory was faulty and that there's still nothing on TV. An hour later, Anita opened her door to a courier with a letter confirming the date and time of... (full context)

Half an hour later, the man in the white shirt knocks on Rune and Anita's door. Anita opens it and he tells her it's time to take Rune. She tells... (full context) 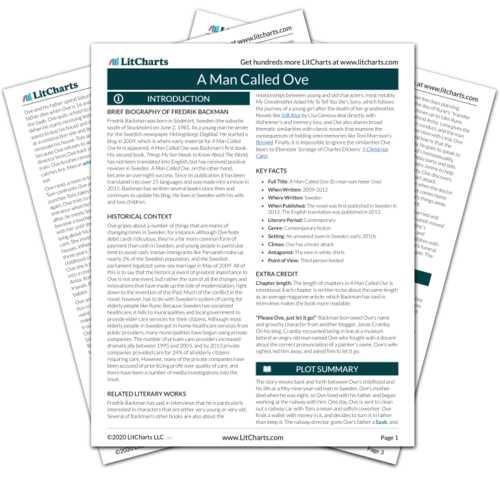 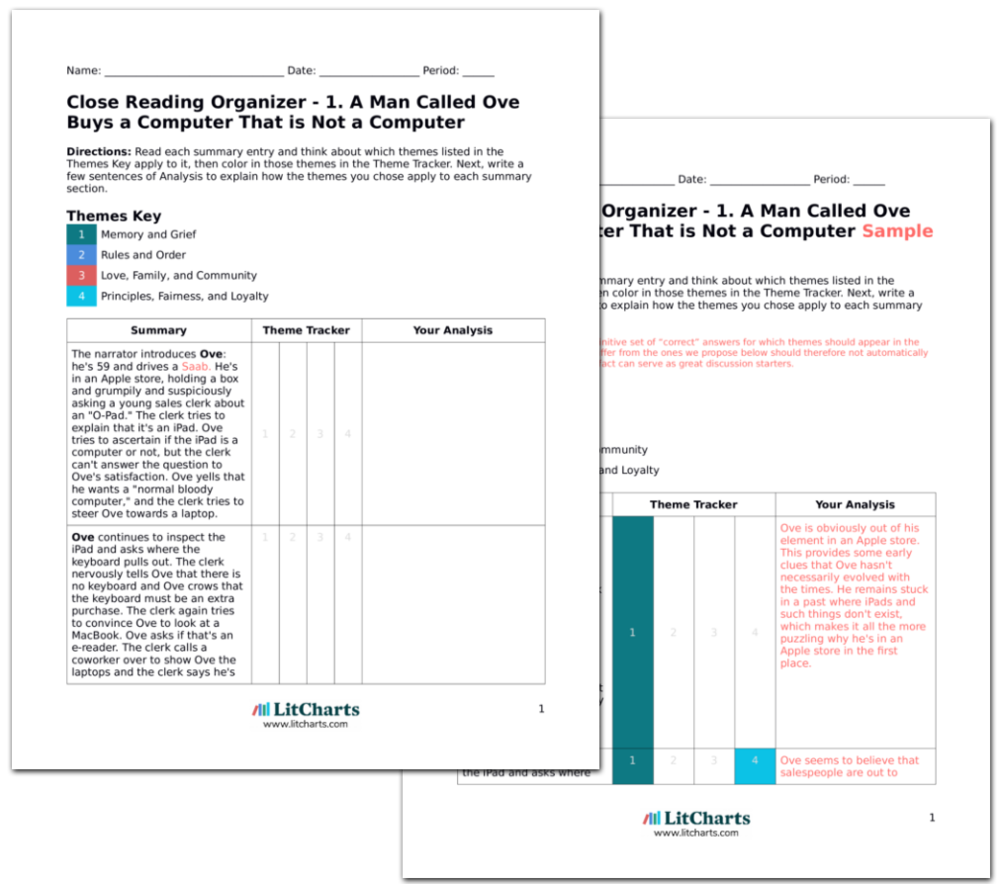