Download this LitChart! (PDF)
Teachers and parents! Struggling with distance learning? Our Teacher Edition on A Painful Case can help.

Welcome to the LitCharts study guide on James Joyce's A Painful Case. Created by the original team behind SparkNotes, LitCharts are the world's best literature guides.

A concise biography of James Joyce plus historical and literary context for A Painful Case.

A quick-reference summary: A Painful Case on a single page.

In-depth summary and analysis of every of A Painful Case. Visual theme-tracking, too.

Explanations, analysis, and visualizations of A Painful Case's themes.

A Painful Case's important quotes, sortable by theme, character, or .

Description, analysis, and timelines for A Painful Case's characters.

Explanations of A Painful Case's symbols, and tracking of where they appear.

An interactive data visualization of A Painful Case's plot and themes.

James Joyce was one of the most groundbreaking and influential writers of the early 20th century. His experimental novels and short stories redrew the boundaries of what was considered appropriate subject matter and style for fiction. The oldest of 10 children, Joyce grew up in Dublin. Though his family fell into poverty, he was able to attend Jesuit schools and later graduate from University College Dublin.  Early in life, he lost faith in the Catholicism he had been raised to believe, and his lapsed faith influenced his works that criticize the church and religious hypocrisy. He attempted to study medicine but gave it up to pursue writing and teaching. He met Nora Barnacle in 1904, who became his companion although they did not marry until 1931. Joyce was a heavy drinker, and after a series of mishaps, in 1904 he and Nora emigrated to Zurich and then Italy, where he taught English. This period saw the publication of Dubliners and Portrait of the Artist as a Young Man. While living in Paris, he finished his masterwork, Ulysses, the novel that established his reputation as a leading avant-garde writer of the time due to its stream-of-consciousness style, shifting points of view, and nonlinear narration. Joyce had poor eyesight and suffered from eye problems, eventually leading to nine operations attempting to repair his vision. In 1941, after undergoing surgery for an ulcer, Joyce died at 58 years old.
Get the entire A Painful Case LitChart as a printable PDF.
"My students can't get enough of your charts and their results have gone through the roof." -Graham S.
Download 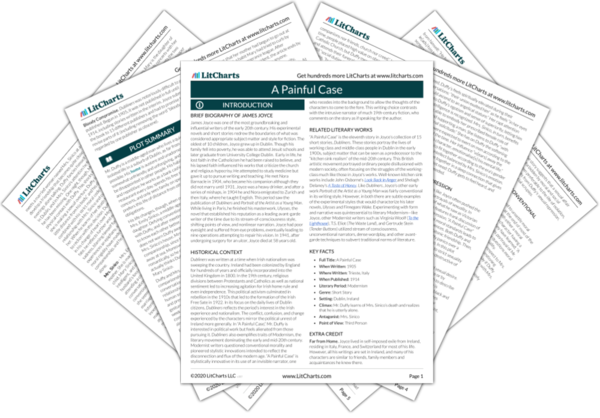 Historical Context of A Painful Case

Dubliners was written at a time when Irish nationalism was sweeping the country. Ireland had been colonized by England for hundreds of years and officially incorporated into the United Kingdom in 1800. In the 19th century, religious divisions between Protestants and Catholics as well as national sentiment led to increasing agitation for Irish home rule and even independence. This political activism culminated in rebellion in the 1910s that led to the formation of the Irish Free Sate in 1922. In its focus on the daily lives of Dublin citizens, Dubliners reflects the period’s interest in the Irish experience and nationalism. The conflict, confusion, and change experienced by the characters mirror the political unrest of Ireland more generally. In “A Painful Case,” Mr. Duffy is interested in political work but feels alienated from those pursuing it. Dubliners also exemplifies traits of Modernism, the literary movement dominating the early and mid-20th century. Modernist writers questioned conventional morality and pioneered stylistic innovations intended to reflect the disconnection and flux of the modern age. “A Painful Case” is stylistically innovative in its use of an invisible narrator, one who recedes into the background to allow the thoughts of the characters to come to the fore. This writing choice contrasts with the intrusive narrator of much 19th-century fiction, who comments on the story as if speaking for the author.

Other Books Related to A Painful Case

“A Painful Case” is the eleventh story in Joyce’s collection of 15 short stories, Dubliners. These stories portray the lives of working class and middle-class people in Dublin in the early 1900s, subject matter that can be seen as a predecessor to the “kitchen sink realism” of the mid-20th century. This British artistic movement portrayed ordinary people disillusioned with modern society, often focusing on the struggles of the working-class much like those in Joyce's works. Well-known kitchen sink works include John Osborne's Look Back in Anger and Shelagh Delaney's A Taste of Honey. Like Dubliners, Joyce’s other early work Portrait of the Artist as a Young Man was fairly conventional in its writing style. However, in both there are subtle examples of the experimental styles that would characterize his later novels, Ulysses and Finnegans Wake. Experimenting with form and narrative was quintessential to literary Modernism—like Joyce, other Modernist writers such as Virginia Woolf (To the Lighthouse), T.S. Eliot (The Waste Land), and Gertrude Stein (Tender Buttons) utilized stream of consciousness, unconventional narrators, dense wordplay, and other avant-garde techniques to subvert traditional norms of literature.
Key Facts about A Painful Case

Extra Credit for A Painful Case

Far from Home. Joyce lived in self-imposed exile from Ireland, residing in Italy, France, and Switzerland for most of his life. However, all his writings are set in Ireland, and many of his characters are similar to friends, family members and acquaintances he knew there.

Bloody Compromise. Dubliners was notoriously difficult to get published. Begun in 1905, it was not published in full until 1914, including stories written in the interim. Joyce submitted the book to 15 different publishers and had to promise to revise parts of it (including removing the word “bloody,” regarded by one publisher as obscene). 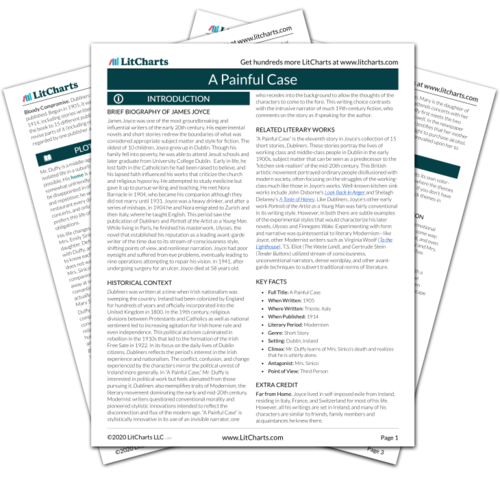 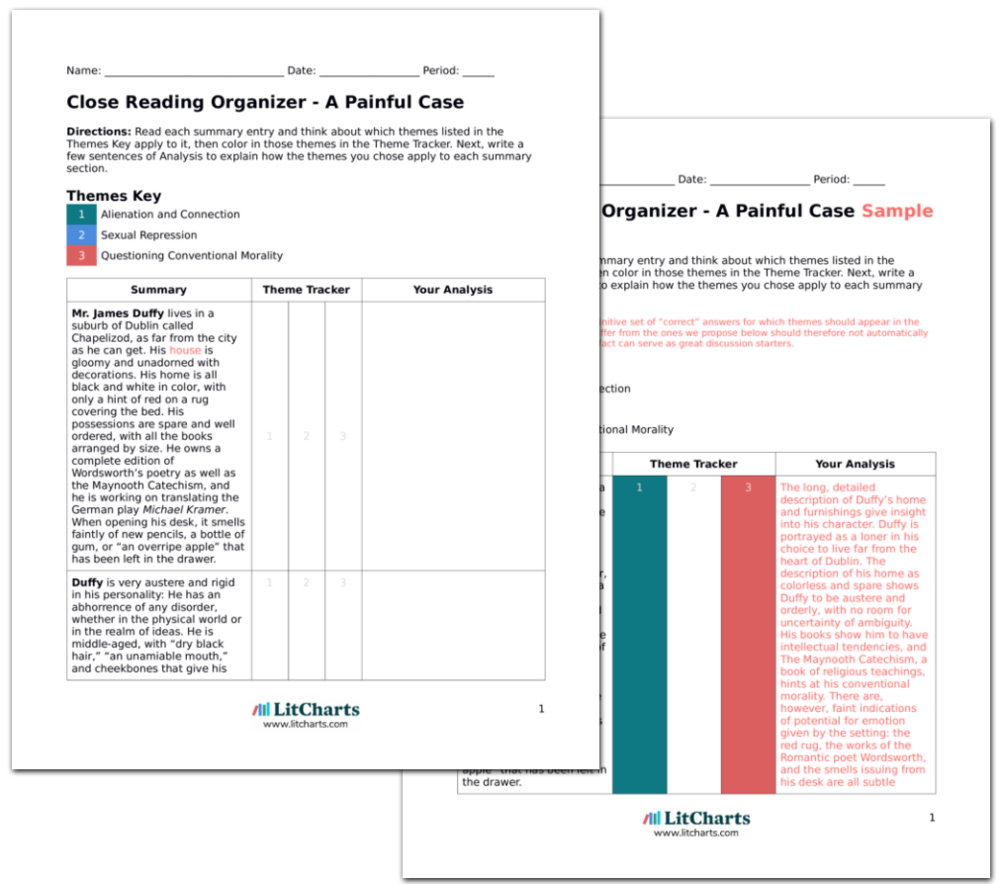