The 1890s brought with them the rise of modern American consumer culture; the Industrial Revolution had caused substantial growth in production and commerce, and it continued to transform the economy in the United States. Chopin’s 1897 short story is fittingly littered with references to this modern consumerism; the reader learns early on that Mrs. Sommers is a veritable shopper, adept at finding bargains and one “who could stand for hours” in order to buy a “desired object that was selling below cost.” As the concept of shopping shifted from a functional necessity to a leisure activity, consumer identity was also increasingly tied to notions of femininity—a notion reflected in everything from the glossy magazines Mrs. Sommers buys to the “gaudy” outfits worn by superficial women in the theater. The story can be read as a direct response to the birth of a capitalist America that promised women an escape from their mundane domestic lives through the thrill of shopping. Chopin reveals, however, the trivial and deceptive nature of consumerism, which is ultimately an inadequate form of escape, and a misplaced endeavor for Mrs. Sommers.

Throughout the story, Mrs. Sommers uses consumerism to avoid the mundanity of everyday life. From the moment she gains the fifteen dollars, she is “absorbed” by the opportunity of spending it. The very prospect of shopping sends her into “a dreamy state,” which occupies her for “a day or two.” Chopin then uses the department store—where Mrs. Sommers’s shopping adventure begins—as a symbol of American consumer culture, and its promise that fashion and consumption can buy happiness, respect, and social esteem. At the glove stand, both Mrs. Sommers and the shop assistant “los[e] themselves” while admiring the gloves, squarely positioning consumerism as a brand of escapism. Similarly, Mrs. Sommers breaks into smile when imagining herself as a princess, “asked to inspect a tiara of diamonds.” The store represents a sort of dreamland, not only for Mrs. Sommers, but for all the women there, to indulge in a very capitalist construction of femininity, allowing them to assume new fantasy identities, far removed from the reality of their lives. Chopin uses the department store to expose the manipulative allure of a consumer culture that renders practical women like Mrs. Sommers trivial, infantile, and almost ridiculous.

Indeed, consumerism is ultimately an inadequate and unfulfilling form of escapism. For Mrs. Sommers, each purchase is followed by disappointment, and the brief amnesia bought with every purchase becomes more and more fleeting. After buying the silk stockings, for example, Mrs. Sommers worries that the little package “seemed lost in the depths of her shabby old shopping-bag.” Then, after her moment of contemplation at the glove stand, she realizes that “there were other places where money might be spent.” Similarly, after buying the magazines, Mrs. Sommers becomes aware that “she was very hungry,” and continues her spending spree in pursuit of lunch. With each purchase, the sentences pertaining to her dissatisfaction become shorter and shorter, reflecting how Mrs. Sommers moves more and more frantically from each purchase to the next, desperate to keep her fantasy alive. After her shopping trip, Mrs Sommers is “very hungry.” Her “cravings” here are both literal and figurative, as she cannot resist the urge to continue spending and indulging. The reader is aware that Mrs. Sommers’s rate of spending is totally unsustainable, and that the lifestyle she yearns for will always be out of reach. Chopin reveals the transitory nature of the joy that consumerism can buy.

Despite her brief but happy sojourn, Mrs. Sommers’s life is not materially changed or improved by the story’s close—consumerism has only offered the illusion of freedom. After Mrs. Sommers has enjoyed shopping, luncheon, and a trip to the theater, the narrator describes how “the play was over, the music ceased, the crowd filed out. It was like a dream ended.” No matter how much she wishes for the contrary, Mrs. Sommers must return home to her normal life, accepting the empty feeling that marks the end to her adventure. The end of the story represents the superficiality of consumerism, as Mrs. Sommers leaves with a “powerful longing” for more. Paradoxically, despite her indulgent exercise in escapism, she is less satisfied than ever before. The fifteen dollars in Mrs. Sommers’s purse were not substantial enough to free her from the drudgery of everyday life, or lessen her hardships in any lasting way. The story implies that she will continue to be poor, exhausted, and busy providing for her children.

While Mrs. Sommers is delighted, seduced, and manipulated by the consumption of mass-produced goods, her escapism is short lived, her future is devoid of any real improvements, and she is left dreading the inevitable return to her normal life. She is certainly an example of rebellion against the selflessness expected of nineteenth-century women and mothers, but Chopin ensures that Mrs Sommers’s small rebellion is ultimately futile, as she remains unable to escape the drudgery of her everyday life or the limitations of her social class. Consumerism, then, acts merely as a distraction, perhaps to prevent women like Mrs. Sommers engaging in more vigorous forms of rebellion against the multiple social structures that serve to oppress them.

The ThemeTracker below shows where, and to what degree, the theme of Consumerism and Escapism appears in each chapter of A Pair of Silk Stockings. Click or tap on any chapter to read its Summary & Analysis.
How often theme appears:
chapter length:
Chapter
A Pair of Silk St...
Get the entire A Pair of Silk Stockings LitChart as a printable PDF.
"My students can't get enough of your charts and their results have gone through the roof." -Graham S.
Download 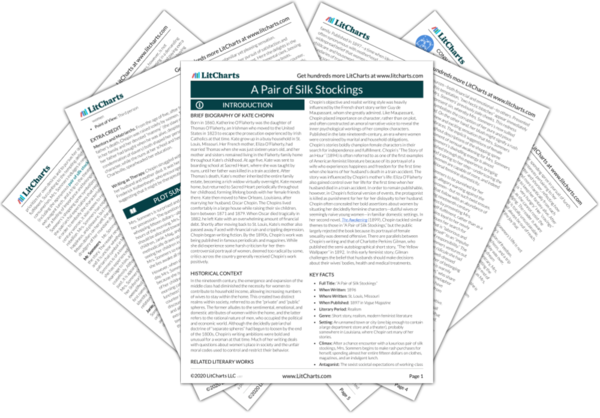 Consumerism and Escapism Quotes in A Pair of Silk Stockings

For a day or two she walked about apparently in a dreamy state, but really absorbed in speculation and calculation. She did not wish to act hastily, to do anything she might afterward regret.

She was not thinking at all. She seemed for the time to be taking a rest from that laborious and fatiguing function and to have abandoned herself to some mechanical impulse that directed her actions and freed her of responsibility.

Her foot and ankle looked very pretty. She could not realize that they belonged to her and were a part of herself.