Download this LitChart! (PDF)
Teachers and parents! Struggling with distance learning? Our Teacher Edition on A Retrieved Reformation can help.

Get LitCharts A+
LitCharts assigns a color and icon to each theme in A Retrieved Reformation, which you can use to track the themes throughout the work.

O. Henry’s “A Retrieved Reformation” is a harsh critique of justice and the law in America during the early twentieth century. When Jimmy Valentine is arrested for an obscure robbery in Springfield, his prison stay is short and sweet thanks to his outside connections, and he is ultimately pardoned by the governor of Arkansas. Despite obviously breaking the law, Jimmy is never held fully accountable for his actions, and he is easily able to continue his life of crime. Jimmy’s punishment, while technically legal—that is, formally handed down by the law—is thus certainly not justice. Similarly, Jimmy’s redemption, in the form of his love for Annabel Adams and his new life in Elmore, is more just than his sham prison stay, yet it is hardly legal. Through Jimmy’s complicated circumstances, O. Henry argues that justice and the law are not necessarily synonymous.

Jimmy’s prison experience does very little to either punish or rehabilitate him. Despite being sentenced to four years, Jimmy and the prison staff know that his stay will be short-lived: Jimmy’s friends and connections mean that he is sure to receive a quick pardon from the governor. Jimmy won’t be an inmate long enough to even warrant a haircut, and as such, the prison does not attempt to rehabilitate him at all. Instead, he is exploited for labor and put to work in the prison shoe shop. The prison’s disregard and neglect of Jimmy and his rehabilitation continues even as he is released into society. After his pardon, Jimmy is given a railroad ticket and five dollars “with which the law expected him to rehabilitate himself into good citizenship and prosperity.” Clearly, Jimmy is on his own without any help from the government or the prison system.

Jimmy’s prison stay is ultimately more of a nuisance than a punishment. He knows from the outset that he will never serve a full sentence, and as a result, neither Jimmy nor the prison system take his incarceration seriously. He doesn’t appreciate his freedom and he disregards the trees and birds upon his release. Jimmy’s imprisonment, then, does not provide any reason or encouragement for him to change and live a straight and honest life. Through his portrayal of Jimmy, O. Henry thus underscores the ineffectiveness of prison as a form of punishment and as a means of rehabilitation.

In addition to this neglect, O. Henry implies that the corruption of the justice system reaches far beyond the prison walls. Ultimately, Jimmy serves only ten months of his four-year sentence. O. Henry writes, “When a man with as many friends on the outside as Jimmy Valentine had is received in the ‘stir’ it is hardly worth while to cut his hair.” Jimmy’s connections are high reaching, and the fact that they result in a pardon from the governor is clear evidence of legal and political corruption. When Jimmy is released from prison, the warden speculates that Jimmy was arrested for the robbery in Springfield because he “wouldn’t prove an alibi for fear of compromising somebody in extremely high-toned society.” This implies that Jimmy’s connections are so powerful, he would rather serve time in prison than risk exposing them.

After Jimmy is released, he returns to his small apartment upstairs of Mike Dolan’s café. After apologizing for leaving him in prison so long, Mike claims that he couldn’t get to him sooner because he “had that protest from Springfield to buck against, and the governor nearly balked.” Clearly, the job that sent Jimmy to prison was a serious crime—serious enough to prompt protests, implicate “high-toned society,” and attract the attention of “eminent” police detective, Ben Price. This, in addition to the governor’s hesitation, suggests that Jimmy deserved to serve his time, and his pardon, while legal, is certainly not justice.

On the other hand, O. Henry’s portrayal of actual, meaningful justice is not exactly legal. When Jimmy begins his life with Annabel Adams in the town of Elmore, he is a fugitive of the law. Ben Price already suspects Jimmy of stealing the five thousand dollars from the bank in Jefferson City, and Jimmy’s life as Ralph D. Spencer is the perfect disguise. Jimmy’s love for Annabel is ultimately the source of his redemption, and he finally lives a straight life working an honest job. Yet while Jimmy seems genuinely rehabilitated, his life with Annabel is still against the law.

After he witnesses Jimmy’s rescue of Annabel’s niece, Agatha, when she becomes locked in Mr. Adams’s safe, Ben Price lets Jimmy go—despite having chased him all the way from Little Rock to Elmore. It is clear to Price that Jimmy has been fully rehabilitated, and as such, the detective turns a blind eye. However, in doing so, Price himself breaks the law; if Jimmy is free to live his life with Annabel, then he will never be held accountable for his past crimes.

O. Henry’s depiction of justice thus forces the reader to look critically at the legal system. Obviously, Jimmy has no intention of ever returning to his former life—this is clear when he gives away his tools and sacrifices his identity as Ralph Spencer—and he has been fully rehabilitated due to this love for Annabel. Reformation is, or at least should be, the ultimate goal of the justice system, and since Jimmy has already achieved this success, an additional ineffective prison stay at the hands of corrupt politicians is wholly unnecessary. With the illegal actions of Jimmy and Ben Price, O. Henry claims that the particular legalities of any given situation are not always a good indicator of justice.

Justice and the Law ThemeTracker

The ThemeTracker below shows where, and to what degree, the theme of Justice and the Law appears in each chapter of A Retrieved Reformation. Click or tap on any chapter to read its Summary & Analysis.
How often theme appears:
chapter length:
Chapter
A Retrieved Refor...
Get the entire A Retrieved Reformation LitChart as a printable PDF.
"My students can't get enough of your charts and their results have gone through the roof." -Graham S.
Download 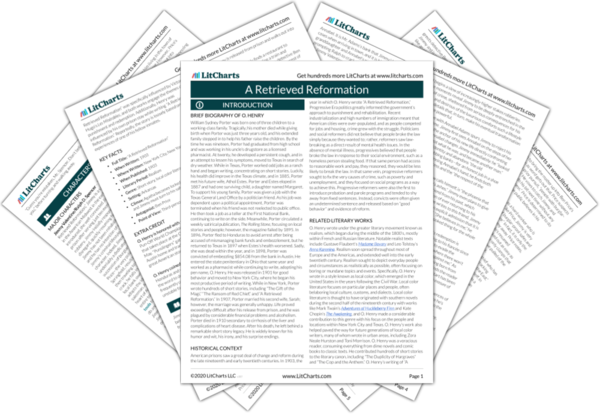 Justice and the Law Quotes in A Retrieved Reformation

[T]he warden handed Jimmy his pardon, which had been signed that morning by the governor. Jimmy took it in a tired kind of way. He had served nearly ten months of a four-year sentence. He had expected to stay only about three months, at the longest. When a man with as many friends on the outside as Jimmy Valentine had is received in the “stir” it is hardly worth while to cut his hair.

“How was it you happened to get sent up on that Springfield job? Was it because you wouldn’t prove an alibi for fear of compromising somebody in extremely high-toned society?”

The clerk handed him a railroad ticket and the five-dollar bill with which the law expected him to rehabilitate himself into good citizenship and prosperity. The warden gave him a cigar, and shook hands. Valentine, 9762, was chronicled on the books “Pardoned by the Governor,” and Mr. James Valentine walked out into the sunshine.

“Sorry we couldn’t make it sooner, Jimmy, me boy,” said Mike. “But we had that protest from Springfield to buck against, and the governor nearly balked. Feeling all right?”