Download this LitChart! (PDF)
Teachers and parents! Struggling with distance learning? Our Teacher Edition on A Sentimental Journey can help.

Welcome to the LitCharts study guide on Laurence Sterne's A Sentimental Journey. Created by the original team behind SparkNotes, LitCharts are the world's best literature guides.

A concise biography of Laurence Sterne plus historical and literary context for A Sentimental Journey.

A quick-reference summary: A Sentimental Journey on a single page.

In-depth summary and analysis of every volume of A Sentimental Journey. Visual theme-tracking, too.

Explanations, analysis, and visualizations of A Sentimental Journey's themes.

Description, analysis, and timelines for A Sentimental Journey's characters.

Explanations of A Sentimental Journey's symbols, and tracking of where they appear.

An interactive data visualization of A Sentimental Journey's plot and themes.

Laurence Stern was born in 1713 in Clonmel, a town in County Tipperary, Ireland. He earned a BA in 1737 and an MA in 1740 from Jesus College, Cambridge, in England. Between earning his two degrees, he became an Anglican priest. He subsequently served as a priest in various parishes in Yorkshire, England. In 1759, he published his first novel, A Political Romance, which satirized English church politics and was immediately censored. Later that same year, he published the first two volumes of his most famous novel, The Life and Opinions of Tristram Shandy, Gentleman, celebrated for its experimental, rambling style and bawdy humor. Subsequent volumes of Tristram Shandy—there are nine in all—were published in 1761, 1765, and 1767. In 1762-1763 Sterne traveled through France, and in 1765 he toured France and Italy, journeys that partially inspired his satirical and sentimental travelogue, A Sentimental Journey Through France and Italy by Mr. Yorick (commonly known by the shorter title A Sentimental Journey). Despite being married to another woman, he began an intense flirtation with Mrs. Elizabeth (Eliza) Draper in 1767. In February 1768, he published the first two volumes of A Sentimental Journey, in which the narrator makes several direct references to a beloved “Eliza.” He died a month later.
Get the entire A Sentimental Journey LitChart as a printable PDF.
"My students can't get enough of your charts and their results have gone through the roof." -Graham S.
Download 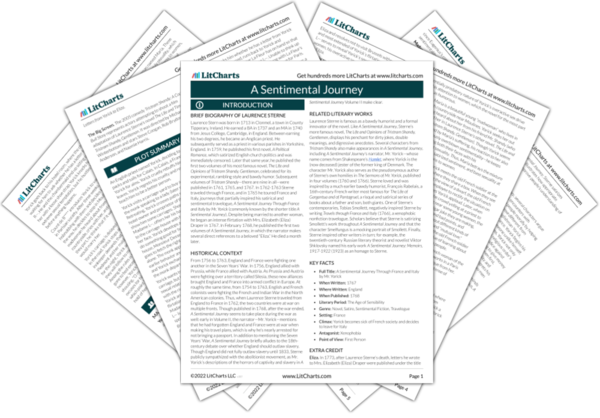 Historical Context of A Sentimental Journey

From 1756 to 1763, England and France were fighting one another in the Seven Years’ War. In 1756, England allied with Prussia, while France allied with Austria. As Prussia and Austria were fighting over a territory called Silesia, these new alliances brought England and France into armed conflict in Europe. At roughly the same time, from 1754 to 1763, English and French colonists were fighting the French and Indian War in the North American colonies. Thus, when Laurence Sterne traveled from England to France in 1762, the two countries were at war on multiple fronts. Though published in 1768, after the war ended, A Sentimental Journey seems to take place during the war as well: early in Volume II, the narrator—Mr. Yorick—mentions that he had forgotten England and France were at war when making his travel plans, which is why he’s nearly arrested for not bringing a passport. In addition to mentioning the Seven Years’ War, A Sentimental Journey briefly alludes to the 18th-century debate over whether England should outlaw slavery. Though England did not fully outlaw slavery until 1833, Sterne publicly sympathized with the abolitionist movement, as Mr. Yorick’s descriptions of the horrors of captivity and slavery in A Sentimental Journey Volume II make clear.

Other Books Related to A Sentimental Journey

Laurence Sterne is famous as a bawdy humorist and a formal innovator of the novel. Like A Sentimental Journey, Sterne’s more famous novel, The Life and Opinions of Tristram Shandy, Gentlemen, displays his penchant for dirty jokes, double meanings, and digressive anecdotes. Several characters from Tristram Shandy also make appearances in A Sentimental Journey, including A Sentimental Journey’s narrator, Mr. Yorick—whose name comes from Shakespeare’s Hamlet, where Yorick is the (now deceased) jester of the former king of Denmark. The character Mr. Yorick also serves as the pseudonymous author of Sterne’s own homilies in The Sermons of Mr. Yorick, published in four volumes (1760 and 1766). Sterne loved and was inspired by a much earlier bawdy humorist, François Rabelais, a 16th-century French writer most famous for The Life of Gargantua and of Pantagruel, a risqué and satirical series of books about a father and son, both giants. One of Sterne’s contemporaries, Tobias Smollett, negatively inspired Sterne by writing Travels through France and Italy (1766), a xenophobic nonfiction travelogue. Scholars believe that Sterne is satirizing Smollett’s work throughout A Sentimental Journey and that the character Smelfungus is a mocking portrait of Smollett. Finally, Sterne inspired other writers in turn; for example, the twentieth-century Russian literary theorist and novelist Viktor Shklovsky named his early work A Sentimental Journey: Memoirs, 1917-1922 (1923) as an homage to Sterne.
Key Facts about A Sentimental Journey

Extra Credit for A Sentimental Journey

Eliza. In 1773, after Laurence Sterne’s death, letters he wrote to Mrs. Elizabeth (Eliza) Draper were published under the title Letters from Yorick to Eliza.

The Big Screen. The 2005 comedy Tristram Shandy: A Cock and Bull Story represents actors attempting to shoot a film adaptation of Laurence Sterne’s novel The Life and Times of Tristram Shandy, Gentleman. It was directed by Michael Winterbottom and stars Steve Coogan, Rob Brydon, Gillian Anderson, and Naomie Harris. 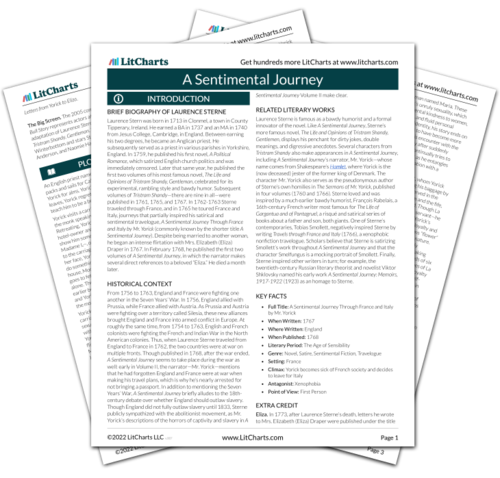 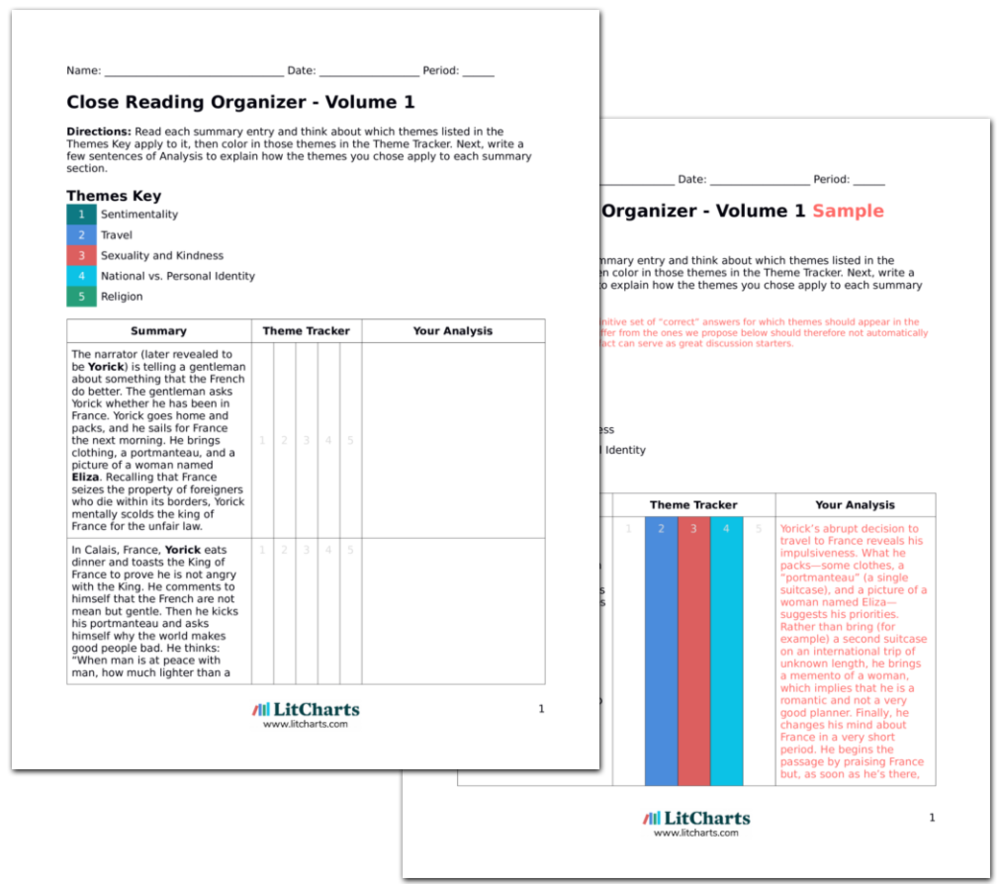