Get LitCharts A+
LitCharts assigns a color and icon to each theme in A Simple Heart, which you can use to track the themes throughout the work.

Flaubert’s protagonist in “A Simple Heart,” a domestic servant named Félicité, experiences the significant loss of a loved one during every period of her life. Her first love, Théodore, abandons her while escaping from military service, her parents both pass away during her childhood, and her mistress’s daughter Virginie, her nephew Victor, her parrot Loulou, and her mistress Madame Aubain die during her adulthood. Though Flaubert’s narrative and the life of his protagonist are filled with the painful and often premature deaths of many characters, thus highlighting the inevitability of death, his illustration of Félicité’s journey in life suggests that death is not purely morbid and tragic. Through her Christian faith, her use of companionship during the grieving process, and her methods of reflecting upon those she has lost, Félicité learns to accept the inevitability of death and meet her own in a peaceful manner.

The novella frequently demonstrates the ways in which characters’ attempts to control the arrival of death are often futile, thus emphasizing that death is inevitable. Throughout the narrative, Félicité misses several opportunities to say goodbye to departing loved ones. When it becomes clear that Virginie Aubain is dying, Félicité jumps off of the carriage bound for her sick bed because she realizes she that she has forgotten to lock the courtyard gate. This decision ultimately causes her to be unable to witness Virginie during her final hours. Félicité’s plans to preside over the loss of her loved ones often go awry, demonstrating the ways in which death can arrive suddenly and without permission.

Though Félicité’s employer Madame Aubain is more capable than Félicité of using her financial privileges to attempt to ward off death (particularly by way of paying for health care and restorative vacations for herself and her family members), she, too, is ultimately unable to control its arrival. Flaubert's narrator describes the mental turns Madame Aubain’s mind takes as it attempts to rationalize Virginie’s death, explaining that she "first [rebels] against God" and then blames herself for not pursuing better medical care for Virginie’s illness. Because this is the second time Virginie has fallen ill, even after a vacation to an oceanside resort, and because no decision that Madame Aubain has made improved Virginie's poor health in the long term, Flaubert suggests that her mental gymnastics are ultimately unproductive, and only increase the severity of her despair.

Whenever Félicité loses a loved one in “A Simple Heart,” she understandably experiences a period of profound sadness and considerable grief. But after grieving a loss, Félicité also appears grateful for opportunities to consider the loved one’s memory and impact upon her life. Ultimately, treasuring the fruits of a past relationship serves as a balm against the bitter sting of loss. For example, Félicité is devastated by her parrot Loulou’s death, and uncharacteristically accuses Fabu, “the butcher’s boy,” of killing him, showing just how saddled with grief and despair she is. But later in the story, when she has the parrot stuffed and mounted in her room, “she would catch sight of him in the early morning light and would recall the days gone by, trivial incidents, right down to the tiniest detail, remembered not in sadness but in perfect tranquility.” The stuffed version of Loulou is described as gaudy and somewhat silly-looking, but Félicité happily uses this inanimate object as a way to remember the bird’s life and her unique relationship with it.

Similarly, when Virginie Aubain dies, Félicité is heartbroken, and both she and Madame Aubain experience a great deal of pain. However, when the two begin taking walks in the garden to talk about Virginie, their spirits appear lifted, and they are able to confront to contents of Virginie’s closet by going through them together. These scenes illustrate that Félicité gleans genuine comfort from confronting a lost loved one’s memory rather than avoiding the fact of their passing. Félicité’s behavior at the end of her own life demonstrates the way in which her lifetime of loss has taught her a great deal about confronting and preparing for death. As a Christian woman, Félicité places her belief in the idea that the kingdom of heaven is open to those who live virtuous lives. As she passes away, she appears confident that though her body may die, her faithful soul will be awarded entry into heaven.

After spending many years collecting objects to remind herself of those she has lost, like the lock she saves from Virginie Aubain’s hair, Félicité finally arranges for an object that represents her and her unique sense of spirituality to be given to someone who she cares for. She gives this object—her stuffed parrot Loulou—to the local priest, who has agreed to allow Félicité to place the parrot on the Corpus Christi altar. Not only does her choice reflect her belief that personal objects can allow us to remember loved ones, but it also highlights the deeply religious nature of her approach to death. Corpus Christi, Félicité’s favorite day of the year, is a holy occasion in the Christian church, and it also becomes the day during which Félicité dies in a moment of spiritual ecstasy.

Though the prevalence of death, as well as the pain it causes the living, is a prominent feature of “A Simple Heart,” Félicité Barette learns that attempting to control death—and confronting grief alone—will only cause greater pain. Ultimately, these lessons, along with the Christian doctrine that reminds Félicité that her soul will continue on to heaven, allow her to accept others’ deaths and finally her own death in a peaceful manner.

The ThemeTracker below shows where, and to what degree, the theme of Love, Loss, and Death appears in each chapter of A Simple Heart. Click or tap on any chapter to read its Summary & Analysis.
How often theme appears:
chapter length:
Chapter
Chapter 1
1
Chapter 2
2
Chapter 3
3
Chapter 4
4
Chapter 5
5
Get the entire A Simple Heart LitChart as a printable PDF.
"My students can't get enough of your charts and their results have gone through the roof." -Graham S.
Download 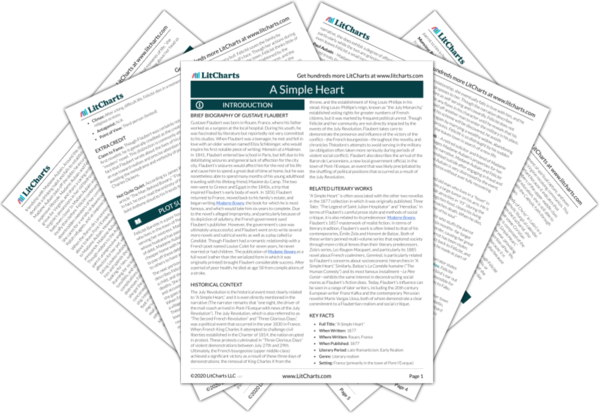 Love, Loss, and Death Quotes in A Simple Heart

Below you will find the important quotes in A Simple Heart related to the theme of Love, Loss, and Death.
Chapter 3 Quotes

She wept at the story of Christ’s Passion. Why had they crucified a man who was so kind to children, fed the hungry, gave sight to the blind, and who had chosen, out of his own gentle nature, to be born amongst the poor on the rough straw of a stable? Seed-time and harvest, the fruits of the vine, all those familiar things mentioned in the gospels had their place in her life too. They now seemed sanctified by contact with God.

Although Félicité had been fed such rough treatment since she was a child, she felt very offended by Madame Aubain. But she soon got over it. After all, it was to be expected that Madame should get upset about her own daughter. For Félicité, the two children were of equal importance; they were bound together by her love for them and it seemed right that they should share the same fate.

Much later, she came to learn the circumstances of Victor’ s death from the captain of his ship. He had caught yellow fever and had been bled too much in the hospital. Four separate doctors had given him the same treatment and he had died immediately. The chief doctor’s comment was, ‘Good, that’s one more to add to the list!’

They found a little chestnut-coloured hat made of long-piled plush, but it had been completely destroyed by the moths. Félicité asked if she might have it as a keepsake. The two women looked at each other and their eyes filled with tears. Madame Aubain opened her arms and Félicité threw herself into them. Mistress and servant embraced each other, uniting their grief in a kiss which made them equal.

As she came to the top of the hill at Ecquemauville, she saw the lights of Honfleur twinkling in the night like clusters of stars and, beyond them, the sea, stretching dimly into the distance. She was suddenly overcome with a fit of giddiness and her wretched childhood, the disappointment of her first love affair, the departure of her nephew and the death of Virginie all came flooding back to her like the waves of an incoming tide, welling up inside her and taking her breath away.

Félicité wept for her in a way that servants rarely weep for their masters. That Madame should die before her disturbed her whole way of thinking; it seemed to go against the natural order of things; it was something unacceptable and unreal.

Ten days later, just as soon as they could get there from Besançon, the heirs arrived on the scene. Madame Aubain’s daughter-in-law went through all the drawers, chose a few pieces of furniture for herself and sold what was left. […] On the walls, yellow patches marked the places where pictures had once hung. They had taken away the children’s beds, along with their mattresses, and the cupboard had been cleared of all Virginie’s things. Félicité went from room to room, heartbroken.

Her eyes closed and a smile played on her lips. One by one her heartbeats became slower, growing successively weaker and fainter like a fountain running dry, an echo fading away. With her dying breath she imagined she saw a huge parrot hovering above her head as the heavens parted to receive her. 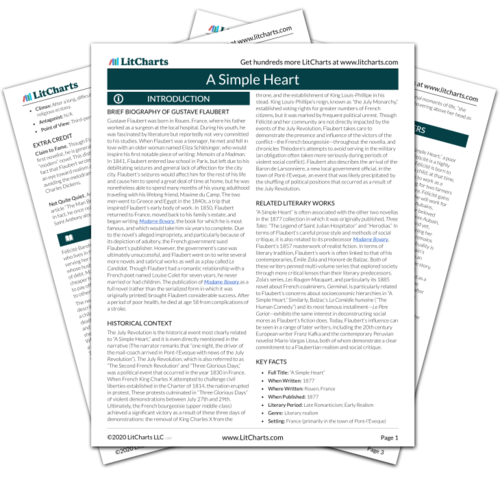 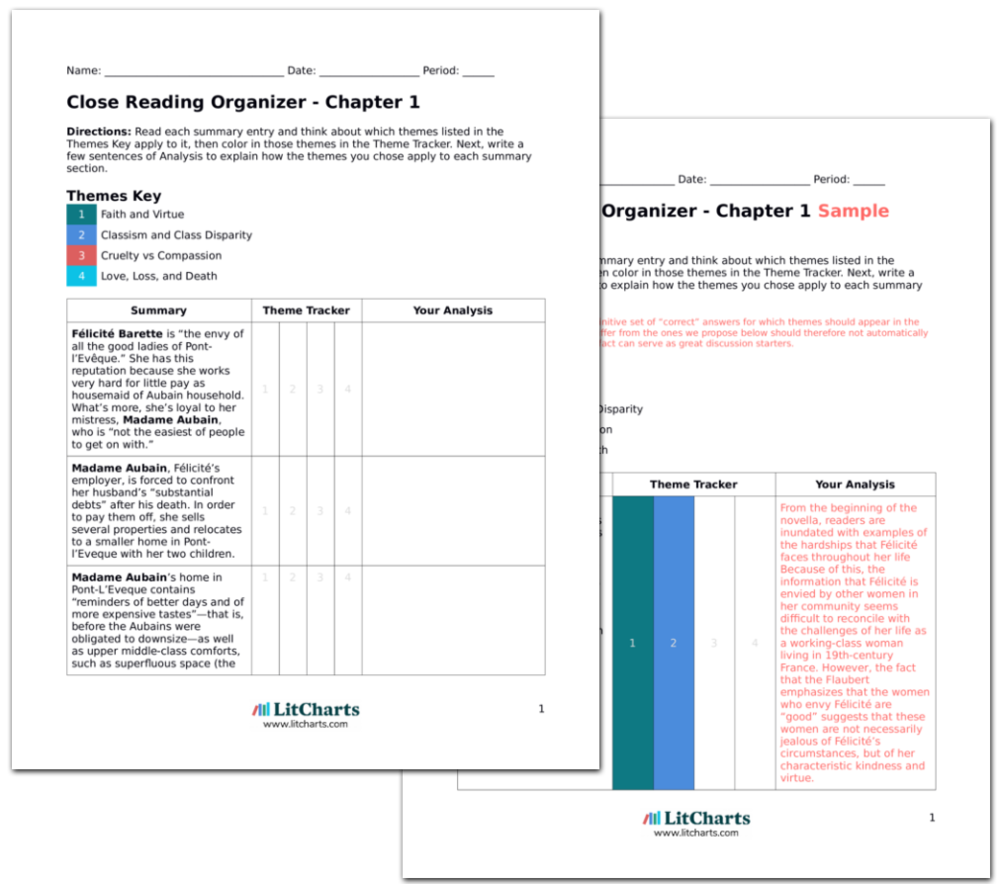