Welcome to the LitCharts study guide on Shelagh Delaney's A Taste of Honey. Created by the original team behind SparkNotes, LitCharts are the world's best literature guides.

A Taste of Honey: Introduction

A concise biography of Shelagh Delaney plus historical and literary context for A Taste of Honey.

A Taste of Honey: Plot Summary

A quick-reference summary: A Taste of Honey on a single page.

In-depth summary and analysis of every scene of A Taste of Honey. Visual theme-tracking, too.

A Taste of Honey: Themes

Explanations, analysis, and visualizations of A Taste of Honey's themes.

A Taste of Honey: Quotes

A Taste of Honey's important quotes, sortable by theme, character, or scene.

A Taste of Honey: Characters

Description, analysis, and timelines for A Taste of Honey's characters.

A Taste of Honey: Symbols

Explanations of A Taste of Honey's symbols, and tracking of where they appear.

A Taste of Honey: Theme Wheel

An interactive data visualization of A Taste of Honey's plot and themes.

Born in 1938 in a working-class family of Irish ancestry, Shelagh Delaney grew up in a small suburb of the Greater Manchester area in Northern England. Despite some difficulties at school, Delaney soon developed a talent in writing and wrote her first play, A Taste of Honey, in ten days, at the age of eighteen. Despite Delaney’s later productions in theater, literature, cinema, and television, this play defined her entire career and remains her most critically acclaimed work. In addition to being considered an important contribution to the 1950s working-class and feminist cultural movements, the play became one of the most influential works in the literary movement of so-called “kitchen sink realism,” as it portrayed issues of race, sexuality, and class in innovative, complex ways. In 1985, Delaney was elected a Fellow of the Royal Society of Literature, an elite society aimed at rewarding and promoting literary talent.
Get the entire A Taste of Honey LitChart as a printable PDF.
"My students can't get enough of your charts and their results have gone through the roof." -Graham S.
Download 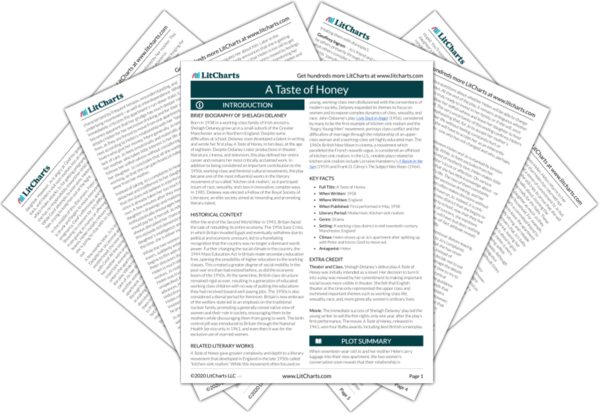 Historical Context of A Taste of Honey

After the end of the Second World War in 1945, Britain faced the task of rebuilding its entire economy. The 1956 Suez Crisis, in which Britain invaded Egypt and eventually withdrew due to political and economic pressure, led to a humiliating recognition that the country was no longer a dominant world power. Further changing the social climate in the country, the 1944 Mass Education Act in Britain made secondary education free, opening the possibility of higher education to the working classes. This created a greater degree of social mobility in the post-war era than had existed before, as did the economic boom of the 1950s. At the same time, British class structure remained rigid as ever, resulting in a generation of educated working class children with no way of putting the educations they had received toward well-paying jobs. The 1950s is also considered a dismal period for feminism. Britain’s new embrace of the welfare state led to an emphasis on the traditional nuclear family, promoting a generally conservative view of women and their role in society, encouraging them to be mothers while discouraging them from going to work. The birth control pill was introduced to Britain through the National Health Service only in 1961, and even then it was for the exclusive use of married women.

Other Books Related to A Taste of Honey

A Taste of Honey gave greater complexity and depth to a literary movement that developed in England in the late 1950s called “kitchen-sink realism.” While this movement often focused on young, working-class men disillusioned with the conventions of modern society, Delaney expanded its themes to focus on women and to expose complex dynamics of class, sexuality, and race. John Osborne’s play Look Back in Anger (1956), considered by many to be the first example of kitchen sink realism and the “Angry Young Men” movement, portrays class conflict and the difficulties of marriage through the relationship of an upper-class woman and a working-class yet highly educated man. The 1960s British New Wave in cinema, a movement which paralleled the French nouvelle vague, is considered an offshoot of kitchen sink realism. In the U.S., notable plays related to kitchen sink realism include Lorraine Hansberry’s A Raisin in the Sun (1959) and Frank D. Gilroy’s The Subject Was Roses (1964).
Key Facts about A Taste of Honey

Extra Credit for A Taste of Honey

Theater and Class. Shelagh Delaney’s debut play A Taste of Honey was initially intended as a novel. Her decision to turn it into a play was moved by her commitment to making important social issues more visible in theater. She felt that English theater at the time only represented the upper class and eschewed important themes such as working-class life, sexuality, race, and, more generally, women’s ordinary lives.

Movie. The immediate success of Shelagh Delaney’ play led the young writer to sell the film rights only one year after the play’s first performance. The movie, A Taste of Honey, released in 1961, won four Bafta awards, including best British screenplay. 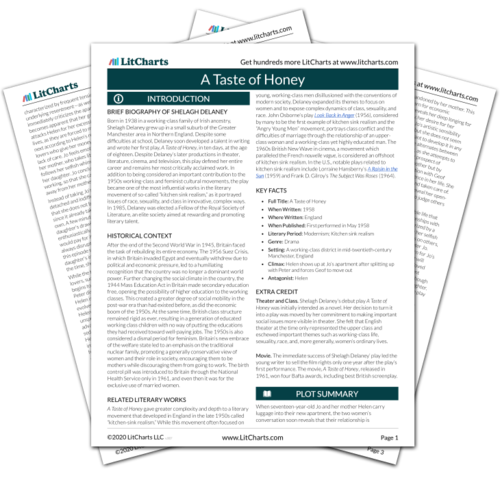 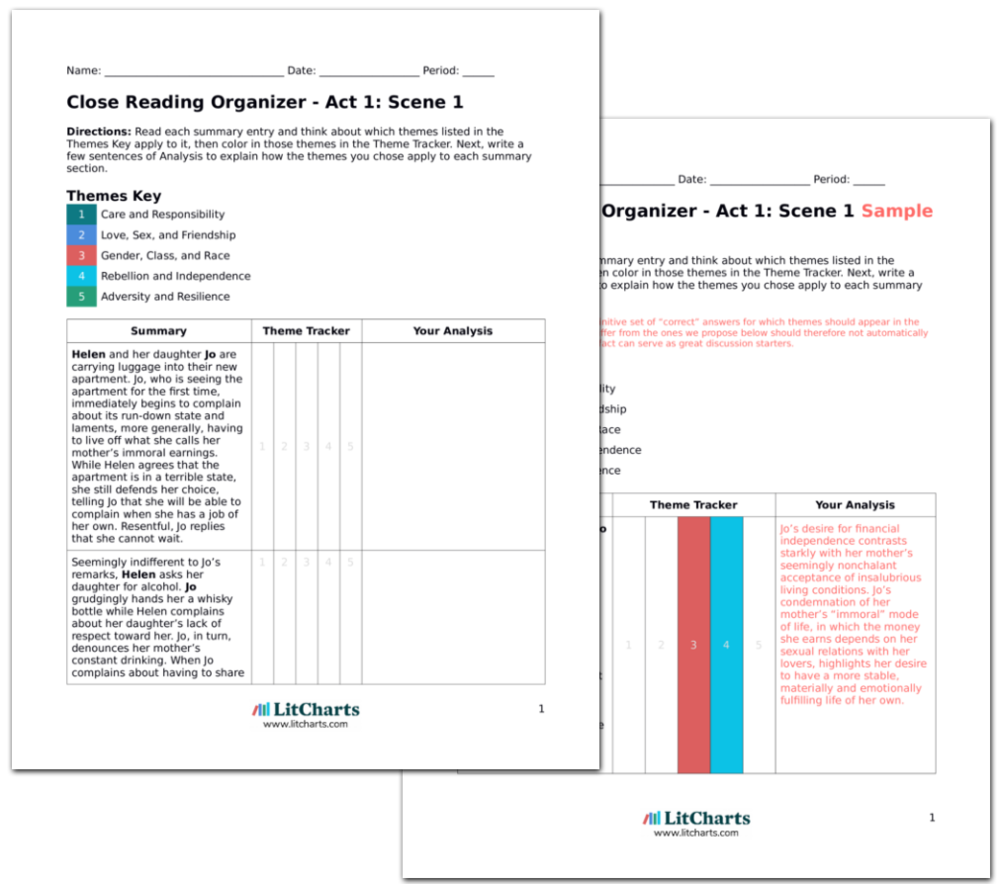