Download this LitChart! (PDF)
Teachers and parents! Struggling with distance learning? Our Teacher Edition on A Vindication of the Rights of Woman can help.

In A Vindication of the Rights of Woman, Mary Wollstonecraft sometimes uses flowers, or plants, to symbolize the planting, nourishing, and blooming of human virtue—or the failure to achieve this. In the Introduction to the work, she compares women to “flowers which are planted in too rich a soil, strength and usefulness…sacrificed to beauty…the flaunting leaves, after having pleased a fastidious eye, fade, disregarded on the stalk, long before the season when they ought to have arrived at maturity.” She uses this image to argue that when women’s minds are not properly nourished in the “soil” of education, with attention lavished on external beauty instead, they will begin to fade and languish long before their prime, never having reached their full intellectual and moral potential. Later, discussing liberty as the condition for virtue, she warns that if women are “not allowed to breathe the sharp invigorating air of freedom, they must ever languish like exotics [flowers], and be reckoned beautiful flaws in nature.” In other words, if women are not afforded the freedom made possible by education, they will never flourish beyond a short season of giving pleasure to onlookers. Similarly, she argues that “modesty…will ever remain a sickly hothouse plant” unless both men and women seek to foster it—that is, when only women are encouraged to be “modest” (really a superficial kind of propriety), modesty will never ripen into a fruitful virtue to the benefit of broader humanity, but will wither and die like an artificially cultivated species.

Flowers Quotes in A Vindication of the Rights of Woman

The A Vindication of the Rights of Woman quotes below all refer to the symbol of Flowers. For each quote, you can also see the other characters and themes related to it (each theme is indicated by its own dot and icon, like this one:

). Note: all page numbers and citation info for the quotes below refer to the Dover Publications edition of A Vindication of the Rights of Woman published in 1996.
Introduction Quotes

The conduct and manners of women, in fact, evidently prove that their minds are not in a healthy state; for, like the flowers which are planted in too rich a soil, strength and usefulness are sacrificed to beauty; and the flaunting leaves, after having pleased a fastidious eye, fade, disregarded on the stalk, long before the season when they ought to have arrived at maturity. — One cause of this barren blooming I attribute to a false system of education, gathered from the books written on this subject by men who, considering females rather as women than human creatures, have been more anxious to make them alluring mistresses than affectionate wives and rational mothers; and the understanding of the sex has been so bubbled by this specious homage, that the civilized women of the present century, with a few exceptions, are only anxious to inspire love, when they ought to cherish a nobler ambition, and by their abilities and virtues exact respect.

Get the entire A Vindication of the Rights of Woman LitChart as a printable PDF.
"My students can't get enough of your charts and their results have gone through the roof." -Graham S.
Download 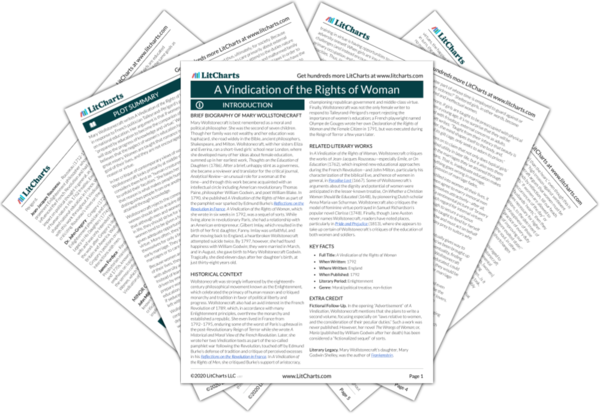 Flowers Symbol Timeline in A Vindication of the Rights of Woman

The timeline below shows where the symbol Flowers appears in A Vindication of the Rights of Woman. The colored dots and icons indicate which themes are associated with that appearance. 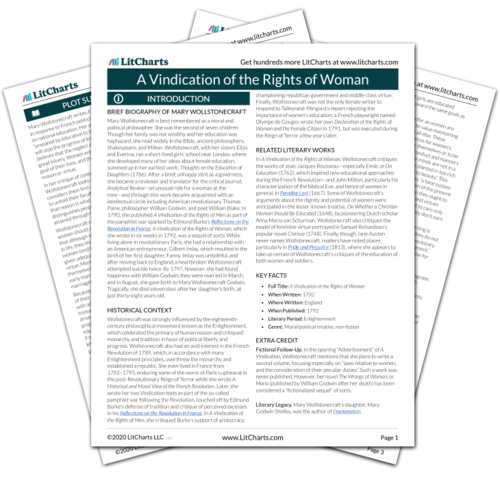 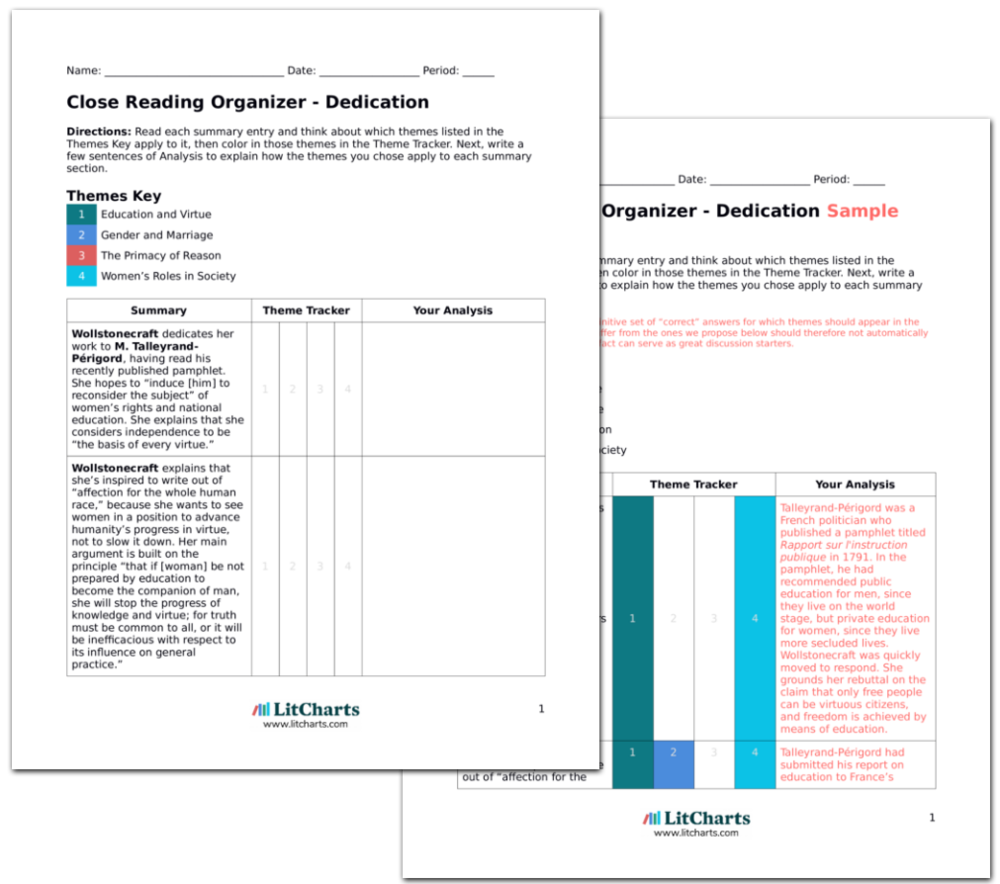