Welcome to the LitCharts study guide on Sarah Orne Jewett's A White Heron. Created by the original team behind SparkNotes, LitCharts are the world's best literature guides.

A concise biography of Sarah Orne Jewett plus historical and literary context for A White Heron.

A quick-reference summary: A White Heron on a single page.

In-depth summary and analysis of every part of A White Heron. Visual theme-tracking, too.

Explanations, analysis, and visualizations of A White Heron's themes.

Description, analysis, and timelines for A White Heron's characters.

Explanations of A White Heron's symbols, and tracking of where they appear.

An interactive data visualization of A White Heron's plot and themes.

Sarah Orne Jewett grew up in the rural town of South Berwick, Maine. Her physician father influenced her as a child by taking her on his visits to the sick within the community, thus teaching her to observe and appreciate the country people of her home state. He also encouraged her love of literature, and when Jewett’s chronic sickliness (which had plagued her since childhood) prevented her from continuing to study medicine, she dedicated herself to writing. Though she remained fond of her hometown, she became a prominent member of the Boston literary circle through her friendship with publisher William Dean Howells. In her lifetime, Jewett published over 20 novels and short story collections, including the novel The Country of the Pointed Firs, her most critically acclaimed work. Jewett died of a stroke in 1909 in the small Maine town where she was born.
Get the entire A White Heron LitChart as a printable PDF.
"My students can't get enough of your charts and their results have gone through the roof." -Graham S.
Download 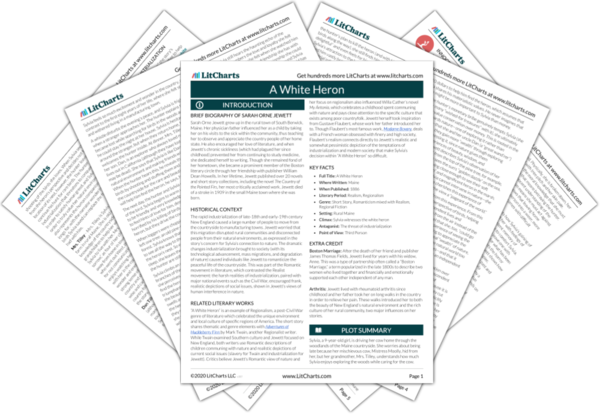 Historical Context of A White Heron

The rapid industrialization of late-18th and early-19th century New England caused a large number of people to move from the countryside to manufacturing towns. Jewett worried that this migration disrupted rural communities and disconnected people from their natural environments, as expressed in the story’s concern for Sylvia’s connection to nature. The dramatic changes industrialization brought to society (with its technological advancement, mass migrations, and degradation of nature) caused individuals like Jewett to romanticize the peaceful life of the countryside. This was part of the Romantic movement in literature, which contrasted the Realist movement: the harsh realities of industrialization, paired with major national events such as the Civil War, encouraged frank, realistic depictions of social issues, shown in Jewett’s views of human interference in nature.

Other Books Related to A White Heron

“A White Heron” is an example of Regionalism, a post-Civil War genre of literature which celebrated the unique environment and local culture of specific regions of America. The short story shares thematic and genre elements with Adventures of Huckleberry Finn by Mark Twain, another Regionalist writer. While Twain examined Southern culture and Jewett focused on New England, both writers use Romantic descriptions of children communing with nature and realistic depictions of current social issues (slavery for Twain and industrialization for Jewett). Critics believe Jewett’s Romantic view of nature and her focus on regionalism also influenced Willa Cather’s novel My Ántonia, which celebrates a childhood spent communing with nature and pays close attention to the specific culture that exists among poor countryfolk. Jewett herself took inspiration from Gustave Flaubert, whose work her father introduced her to. Though Flaubert’s most famous work, Madame Bovary, deals with a French woman obsessed with finery and high society, Flaubert’s realism connects directly to Jewett’s realistic and somewhat pessimistic depiction of the temptations of industrialization and modern society that make Sylvia’s decision within “A White Heron” so difficult.
Key Facts about A White Heron

Extra Credit for A White Heron

Boston Marriage: After the death of her friend and publisher James Thomas Fields, Jewett lived for years with his widow, Anne. This was a type of partnership often called a “Boston Marriage,” a term popularized in the late 1800s to describe two women who lived together and financially and emotionally supported each other independent of any man.

Arthritis: Jewett lived with rheumatoid arthritis since childhood and her father took her on long walks in the country in order to relieve her pain. These walks introduced her to both the beauty of New England’s natural environment and the rich culture of her rural community, two major influences on her stories. 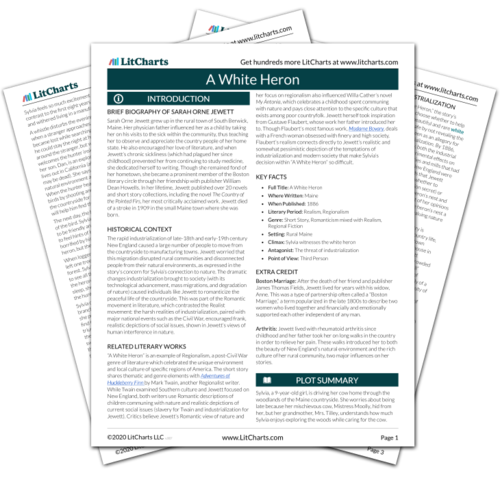 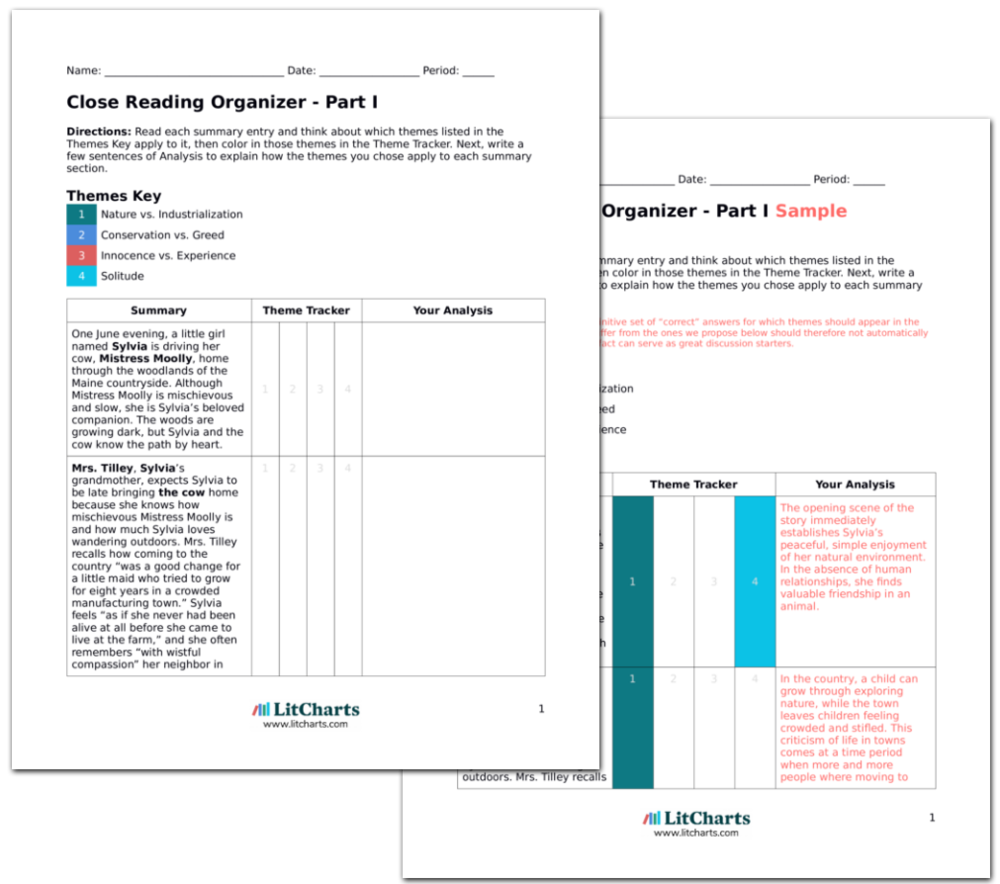