Download this LitChart! (PDF)
Teachers and parents! Struggling with distance learning? Our Teacher Edition on A Wizard of Earthsea can help.

Welcome to the LitCharts study guide on Ursula K. Le Guin's A Wizard of Earthsea. Created by the original team behind SparkNotes, LitCharts are the world's best literature guides.

A Wizard of Earthsea: Introduction

A concise biography of Ursula K. Le Guin plus historical and literary context for A Wizard of Earthsea.

A Wizard of Earthsea: Plot Summary

A quick-reference summary: A Wizard of Earthsea on a single page.

In-depth summary and analysis of every chapter of A Wizard of Earthsea. Visual theme-tracking, too.

A Wizard of Earthsea: Themes

Explanations, analysis, and visualizations of A Wizard of Earthsea's themes.

A Wizard of Earthsea: Quotes

A Wizard of Earthsea's important quotes, sortable by theme, character, or chapter.

A Wizard of Earthsea: Characters

Description, analysis, and timelines for A Wizard of Earthsea's characters.

A Wizard of Earthsea: Symbols

Explanations of A Wizard of Earthsea's symbols, and tracking of where they appear.

A Wizard of Earthsea: Theme Wheel

An interactive data visualization of A Wizard of Earthsea's plot and themes.

Ursula K. Le Guin was born in Berkeley, California, to anthropologist parents. After studying at Radcliffe College (present-day Harvard University) and Columbia University, she worked as a secretary and a French teacher and eventually as a full-time writer of science fiction. Although she was known throughout her life as “America’s greatest living science fiction writer,” she balked at being put in a box as a sci-fi writer and preferred to be known simply as a novelist. Nevertheless, her enduring influence on the genre inspired writers like David Mitchell (Cloud Atlas), Neil Gaiman (American Gods, The Sandman), Kelly Link (Magic for Beginners), and Jeff VanderMeer (Annihilation). She was responsible for revolutionizing the genre by incorporating literary, lyrical prose, Taoist influences, and themes of feminism, anarchism, and environmentalism into her many works. Today, her name is synonymous with using the “safe, sterile laboratory” of the future and fictional world in order to examine the nature of reality, the issues at the heart of the human condition, and the possibilities and dangers that humanity faces as it expands, changes, and seeks to spread its own influence.
Get the entire A Wizard of Earthsea LitChart as a printable PDF.
"My students can't get enough of your charts and their results have gone through the roof." -Graham S.
Download 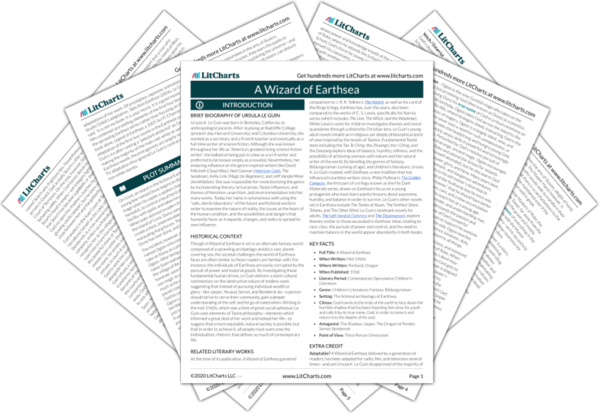 Historical Context of A Wizard of Earthsea

Though A Wizard of Earthsea is set in an alternate fantasy world composed of a sprawling archipelago amidst a vast, planet-covering sea, the societal challenges the world of Earthsea faces are often similar to those readers are familiar with. For instance, the individuals of Earthsea are easily corrupted by the pursuit of power and material goods. By investigating these fundamental human drives, Le Guin delivers a stark cultural commentary on the destructive nature of endless want, suggesting that instead of pursuing individual wealth or glory—like Jasper, Yevaud, Serret, and Bendersk do—a person should strive to serve their community, gain a deeper understanding of the self, and let go of materialism. Writing in the mid-1960s, which was a time of great social upheaval, Le Guin uses elements of Taoist philosophy—elements which informed a great deal of her work and indeed her life—to suggest that a more equitable, natural society is possible, but that in order to achieve it, all people must overcome the individualistic rhetoric that defines so much of contemporary life.

Other Books Related to A Wizard of Earthsea

At the time of its publication, A Wizard of Earthsea garnered comparison to J. R. R. Tolkien’s The Hobbit, as well as his Lord of the Rings trilogy. Earthsea has, over the years, also been compared to the works of C. S. Lewis, specifically his Narnia series (which includes The Lion, The Witch, and the Wardrobe). While Lewis’s work for children investigates themes and moral quandaries through a distinctly Christian lens, Le Guin’s young adult novels inhabit an irreligious yet deeply philosophical point of view inspired by the tenets of Taoism. Fundamental Taoist texts including the Tao Te Ching, the Zhuangzi, the I Ching, and the Daozang explore ideas of balance, humility, stillness, and the possibility of achieving oneness with nature and the natural order of the world. By blending the genres of fantasy, Bildungsroman (coming of age), and children’s literature, Ursula K. Le Guin created, with Earthsea, a new tradition that has influenced countless writers since. Philip Pullman’s The Golden Compass, the first part of a trilogy known as the His Dark Materials series, draws on Earthsea’s focus on a young protagonist who must learn painful lessons about autonomy, humility, and balance in order to survive. Le Guin’s other novels set in Earthsea include The Tombs of Atuan, The Farthest Shore, Tehanu, and The Other Wind. Le Guin’s landmark novels for adults, The Left Hand of Darkness and The Dispossessed, explore themes similar to those excavated in Earthsea: ideas relating to race, class, the pursuit of power and control, and the need to maintain balance in the world appear abundantly in both books.
Key Facts about A Wizard of Earthsea

Extra Credit for A Wizard of Earthsea

Adaptable? A Wizard of Earthsea, beloved by a generation of readers, has been adapted for radio, film, and television several times—and yet Ursula K. Le Guin disapproved of the majority of adaptations of her work. Of prestigious Japanese animation Studio Ghibli’s adaptation, Tales from Earthsea (2006), Le Guin said, “It is not my book. It is your movie. It is a good movie.” The film combined storytelling elements of the first four books of the sprawling Earthsea series rather than focusing on the first book alone. Legend of Earthsea, a 2005 Sci-Fi Channel adaptation of the first two novels in the Earthsea cycle, drew Le Guin’s ire after casting a “petulant white kid” as Ged, as well as making the majority of the main cast white as well. In the Earthsea novels, the protagonists are largely non-white—the TV adaptation thus ignored Le Guin’s central choice to focus on non-white stories. 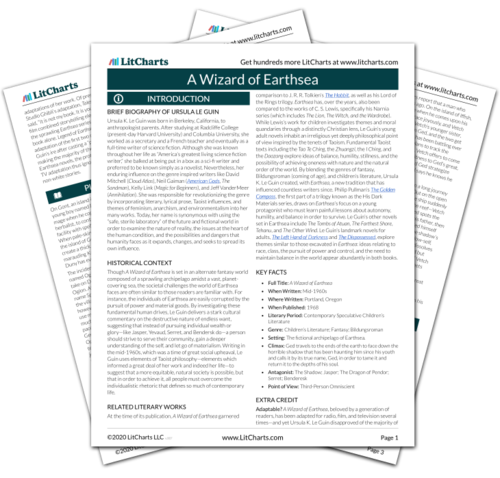 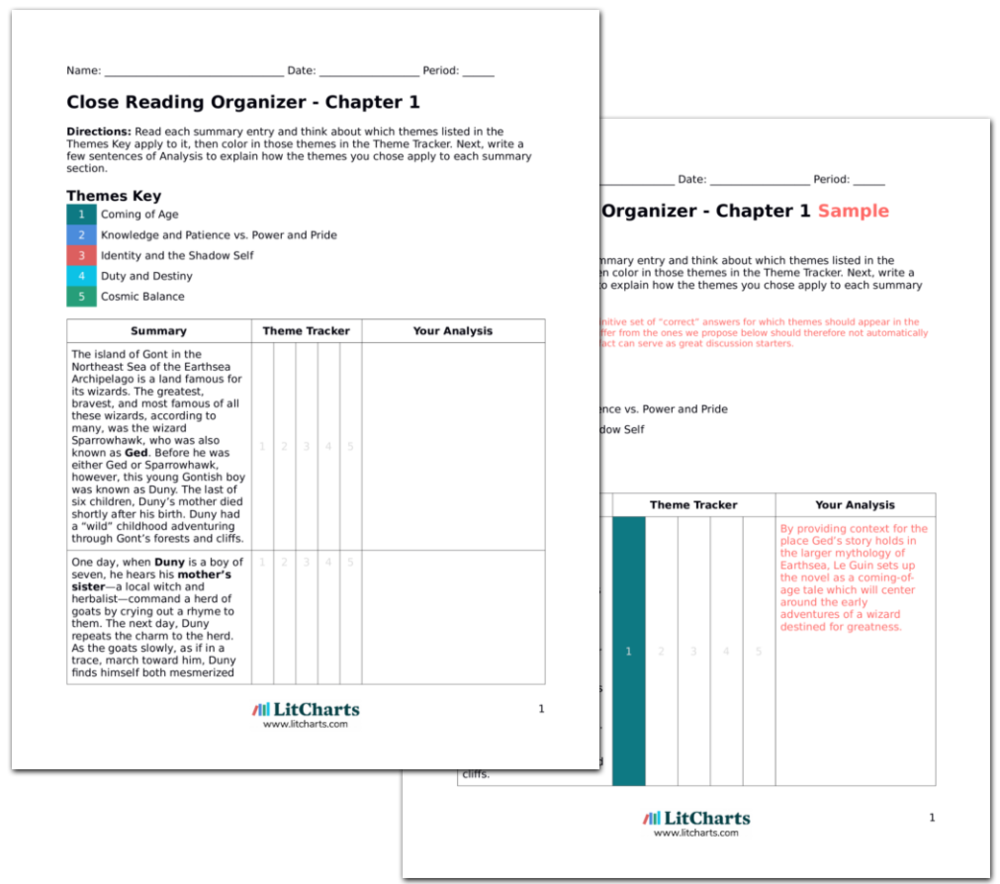