When Elizabeth Cady Stanton first delivered her “Address on Woman’s Rights” in 1848, most women around the world couldn’t vote or hold property, and only rarely could they pursue a real education. All the while, their male counterparts attended seminaries and universities, voted in elections, and lived public lives (as opposed to domestic ones). Stanton took great issue with the fact that American women were forced to languish in their homes, never meeting their full potential, while American society developed without them. She believed that the vice, racism, and inequality in the U.S. could be remedied if American women were allowed to play an active role in society. Stanton’s speech suggests that as long as women remain stunted and “half developed”—due to being barred from equal participation in public life—the U.S. will suffer politically, socially, and diplomatically.

Much of Elizabeth Cady Stanton’s speech calls attention to the issues and ruptures in American society. By highlighting the failings of American society—war, drunkenness, immorality, and the upholding of slavery—Stanton was offering to her audience a rousing call to action. The U.S., in her estimation, was at a low point, and it could only be raised up again through the struggle for women’s rights. A form of government that exists “without the consent of the governed” cannot uplift itself and prosper. “There seems now to be a kind of moral stagnation in our midst,” Stanton says of the current state of American society. “War, slavery, drunkenness, licentiousness and gluttony have been dragged naked before the people [and] we hug these monsters to our arms.” In this quotation, Stanton is alluding to the issues plaguing American society in the mid-1840s—among them racism, war with Mexico, greed (fueled by the California gold rush in the West), and an absence of temperance laws. At the time of Stanton’s speech, there were indeed a great many conflicts and tensions rocking America, which was still a relatively young nation comprised of just 30 states. Stanton was an abolitionist, or an opponent of slavery, and a pacifist who opposed war and violence. But the U.S. of 1840 was defined by the institution of slavery, and the country was involved in foreign conflicts in the name of adding land to its territory and reaping the resources that belonged to others. In Stanton’s estimation, the fact that women’s “rights and interests [were] wholly overlooked” was contributing to the unhappiness of the American family, as well as the “drear and dark” state of American society more broadly. Half of the United States’ population couldn’t participate in elections or have any fair say in their country’s trajectory—and Stanton suggested that women could have a unique role in solving the problems blighting the U.S. if they were allowed to participate fully in society.

By highlighting how the U.S. was suffering without women’s full participation, Stanton forecasted more wars and moral transgressions unless women earned the right to shape the society in which they lived. “How shall we account for this [wicked] state of things?” Stanton asks, before answering her own question: “Depend upon it the degradation of women is the secret of all this woe, the inactivity of her head and her heart.” In other words, Stanton is saying that the “secret” of American society’s failings is rooted in how it treats its female population. By resigning women to “inactivity” and denying them the chance to pursue educations, to vote, and to put their “heart[s]” into the betterment of American society, America has doomed itself. “As long as the women of this nation remain but half developed in mind and body,” Stanton argues, America will suffer from a moral lack that penetrates every aspect of society. But if women secure the right to vote and to participate in public life, Stanton argues, they might be able to “soften down” the nation’s violence and “[refine its] vulgarity.” The instant women are allowed to “claim all the rights of a citizen,” Stanton argues, they will “buckle on [their] armor and fight in defence of [their] country.” Women are just as “wise and patriotic” as men—and once women are allowed to use their voices and their votes to influence American society, Stanton claims, the country will begin to find redemption and prosperity.

Throughout history, countries around the world have seen men turn to women “in great cris[e]s of national affairs”—Stanton cites the infiltration of “French revolutionary and atheistical opinions” into English society, which was remedied by the religious writer Hannah More’s writings against “these destructive influences.” Stanton also offers up the story of Joan of Arc, who led France in a war against their English occupiers and helped to deliver her country’s independence. Through these examples of how women have bettered their societies, Stanton suggests that American society, too, will ascend to new heights and eradicate its political and moral woes if women are allowed to have voices. When women can at last participate fully in society, Stanton argues, society will “fulfill its destiny” and reach its true potential.

The ThemeTracker below shows where, and to what degree, the theme of Women, Public Life, and American Prosperity appears in each chapter of Address on Woman’s Rights. Click or tap on any chapter to read its Summary & Analysis.
How often theme appears:
chapter length:
Chapter
Address on Woman’...
Get the entire Address on Woman’s Rights LitChart as a printable PDF.
"My students can't get enough of your charts and their results have gone through the roof." -Graham S.
Download 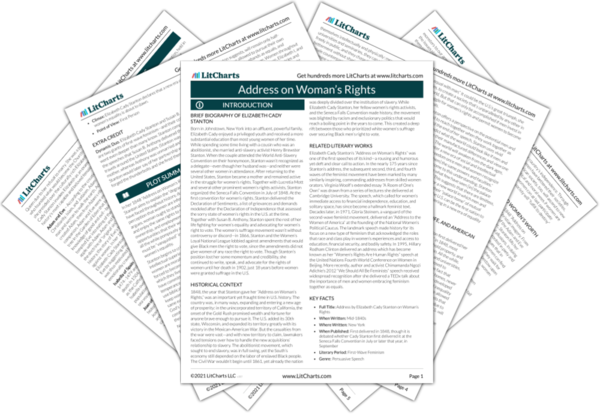 In my opinion he is infinitely woman's inferior in every moral virtue, not by nature, but made so by a false education. In carrying out his own selfishness, man has greatly improved woman's moral nature, but by an almost total shipwreck of his own. Woman has now the noble virtues of the martyr, she is early schooled to self denial and suffering. […] Then [man] says by way of an excuse for his degradation, God made woman more self denying than us, it is her nature, it does not cost her as much to give up her wishes, her will, her life even as it does us. We are naturally selfish, God made us so. No!

We did assemble to protest against a form of government existing without the consent of the governed, to declare our right to be free as man is free.

But say some would you have woman vote? What refined delicate woman at the polls, mingling in such scenes of violence and vulgarity—most certainly—where there is so much to be feared for the pure, the innocent, the noble, the mother surely should be there to watch and guard her sons, who must encounter such stormy dangerous scenes at the tender age of 21. Much is said of woman's influence, might not her presence do much towards softening down this violence—refining this vulgarity?

In nothing is woman's true happiness consulted, men like to […] induce her to believe her organization is so much finer more delicate than theirs, that she is not fitted to struggle with the tempests of public life but needs their care and protection. Care and protection? such as the wolf gives the lamb—such as the eagle the hare he carries to his eyrie. Most cunningly he entraps her and then takes from her all those rights which are dearer to him than life itself.

Let woman live as she should, let her feel her accountability to her Maker— Let her know that her spirit is fitted for as high a sphere as man's and that her soul requires food as pure as refreshing as his—let her live first for God and she will not make imperfect man an object of reverence and idolatry— Teach her her responsibility as a being of conscience and of reason—that she will find any earthly support unstable and weak, that her only safe dependence is on the arm of omnipotence.

The only happy households we now see are those in which Husband and wife share equally in counsel and government. There can be no true dignity or independence where there is subordination, no happiness without freedom.

The feeling we so often hear expressed of dislike to seeing woman in places of publicity and trust is merely the effect of custom very like that prejudice against colour that has been proved to be so truly American.

There seems now to be a kind of moral stagnation in our midst. […] War, slavery, drunkenness, licentiousness and gluttony have been dragged naked before the people and all their abominations full brought to light. Yet with idiotic laugh we hug these monsters to our arms.... […] And how shall we account for this state of things? Depend upon it the degradation of women is the secret of all this woe—the inactivity of her head and heart. The voice of woman has been silenced, but man cannot fulfill his destiny alone—he cannot redeem his race unaided[.]

A new era is dawn<ing upon the world, […] when the millions now under the iron heel of the tyrant will assert their manhood, when woman yielding to the voice of the spirit within her will demand the recognition of her humanity, when her soul, grown too large for her chains, will burst the bands around her set and stand redeemed….

The slumber is broken and the sleeper has risen.

Persist to ask and it will come,

Seek not for rest in humbler home

So shalt thou see what few have seen

The palace home of King and Queen. 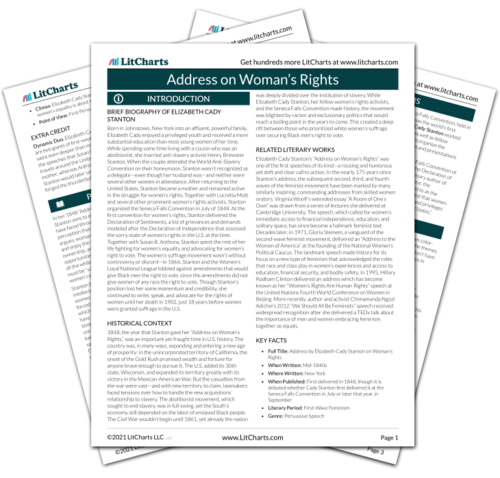 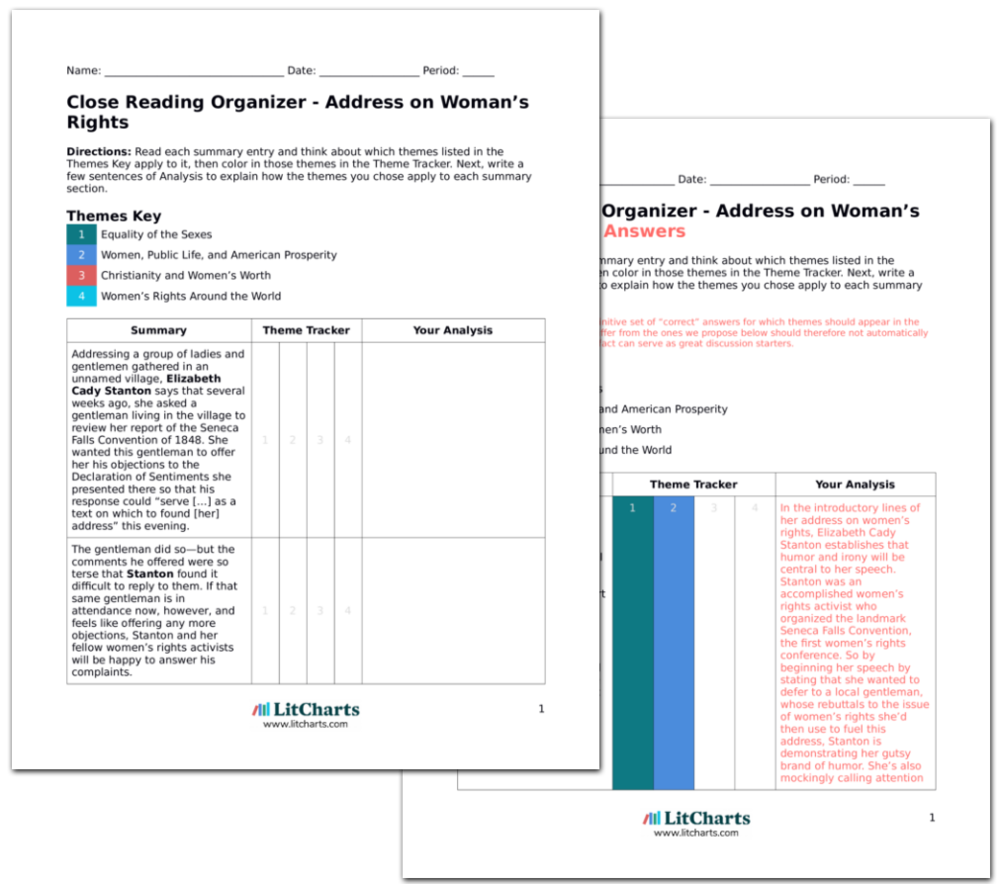