Download this LitChart! (PDF)
Teachers and parents! Struggling with distance learning? Our Teacher Edition on Alcestis can help.

Welcome to the LitCharts study guide on Euripides's Alcestis. Created by the original team behind SparkNotes, LitCharts are the world's best literature guides.

A concise biography of Euripides plus historical and literary context for Alcestis.

A quick-reference summary: Alcestis on a single page.

In-depth summary and analysis of every lines of Alcestis. Visual theme-tracking, too.

Explanations of Alcestis's symbols, and tracking of where they appear.

An interactive data visualization of Alcestis's plot and themes.

Alongside Aeschylus and Sophocles, Euripides was one of the great tragic playwrights of classical Greece. He authored more than 90 plays. Little is known of Euripides’s early years. He did some acting in his youth, but his voice wasn’t strong enough to be successful on the stage, so he focused on becoming a playwright instead. In the classical Greek context, this meant that he produced and directed his plays as well.  Euripides took up such themes as justice, the will of the gods, and people’s intrinsic merit as opposed to their social status. His plays are characterized by an innovative use of irony, a versatile incorporation of comedic elements, and a reduced role for the gods as characters.  Out of his 90 plays, only four won prizes; Aeschylus and Sophocles were far more successful in their own day. However, audiences loved Euripides’s storytelling and twists on traditional mythology. Euripides lived his final years in the court of Archelaus, king of Macedon, and died there.
Get the entire Alcestis LitChart as a printable PDF.
"My students can't get enough of your charts and their results have gone through the roof." -Graham S.
Download 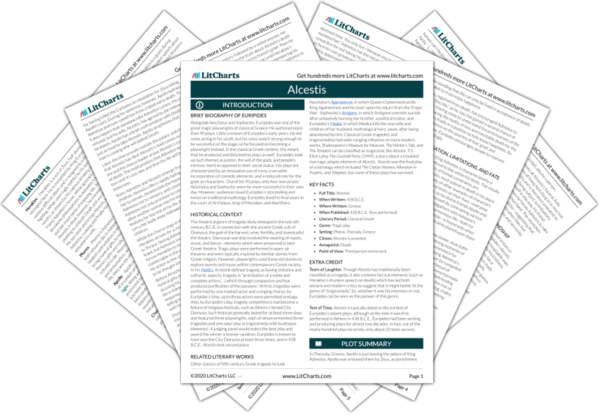 The theatrical genre of tragedy likely emerged in the late 6th  century B.C.E. in connection with the ancient Greek cult of Dionysus, the god of the harvest, wine, fertility, and (eventually) the theatre. Dionysian worship involved the wearing of masks, music, and dance—elements which were preserved in later Greek theatre. Tragic plays were performed in open-air theatres and were typically inspired by familiar stories from Greek religion. However, playwrights used these old stories to explore events and issues within contemporary Greek society. In his Poetics, Aristotle defined tragedy as having imitative and cathartic aspects: tragedy is “an imitation of a noble and complete action […] which through compassion and fear produces purification of the passions.” At first, tragedies were performed by one masked actor and a singing chorus; by Euripides’s time, up to three actors were permitted onstage. Also, by Euripides’s day, tragedy competitions had become a fixture of religious festivals, such as Athens’s famed City Dionysia. Such festivals generally lasted for at least three days and featured three playwrights, each of whom presented three tragedies and one satyr play (a tragicomedy with burlesque elements). A judging panel would select the best play and award the winner a bronze cauldron. Euripides is known to have won the City Dionysia at least three times, and in 438 B.C.E., Alcestis took second place.

Other Books Related to Alcestis

Other classics of fifth-century Greek tragedy include Aeschylus’s Agamemnon, in which Queen Clytemnestra kills King Agamemnon and his lover upon his return from the Trojan War;  Sophocles’s Antigone, in which Antigone commits suicide after unlawfully burying her brother, a political traitor; and Euripides’s Medea, in which Medea kills the new wife and children of her husband, mythological hero Jason, after being abandoned by him. Classical Greek tragedies and tragicomedies had wide-ranging influence on more modern works. Shakespeare’s Measure for Measure, The Winter’s Tale, and The Tempest can be classified as tragicomic like Alcestis. T.S. Eliot’s play The Cocktail Party (1949), a story about a troubled marriage, adapts elements of Alcestis.  Alcestis was the final play of a tetralogy which included The Cretan Women, Alkmaion in Psophis, and Telephos, but none of these plays has survived.
Key Facts about Alcestis

Tears of Laughter. Though Alcestis has traditionally been classified as a tragedy, it also contains farcical elements (such as Herakles’s drunken speech on death) which has led both ancient and modern critics to suggest that it might better fit the genre of “tragicomedy.” So, whether it was his intention or not, Euripides can be seen as the pioneer of this genre.

Test of Time. Alcestis is typically dated as the earliest of Euripides’s extant plays, although at the time it was first performed in Athens in 438 B.C.E., Euripides had been writing and producing plays for almost two decades. In fact, out of the nearly hundred plays he wrote, only about 20 texts survive. 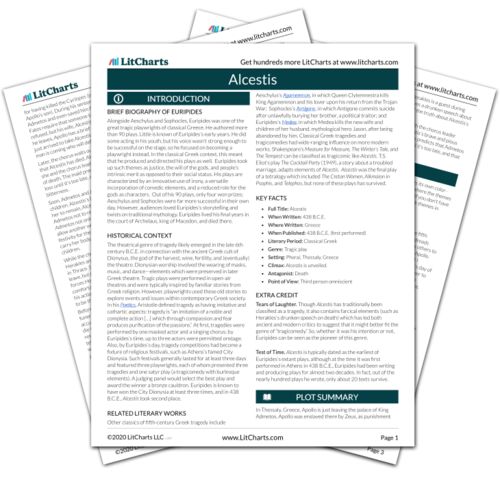 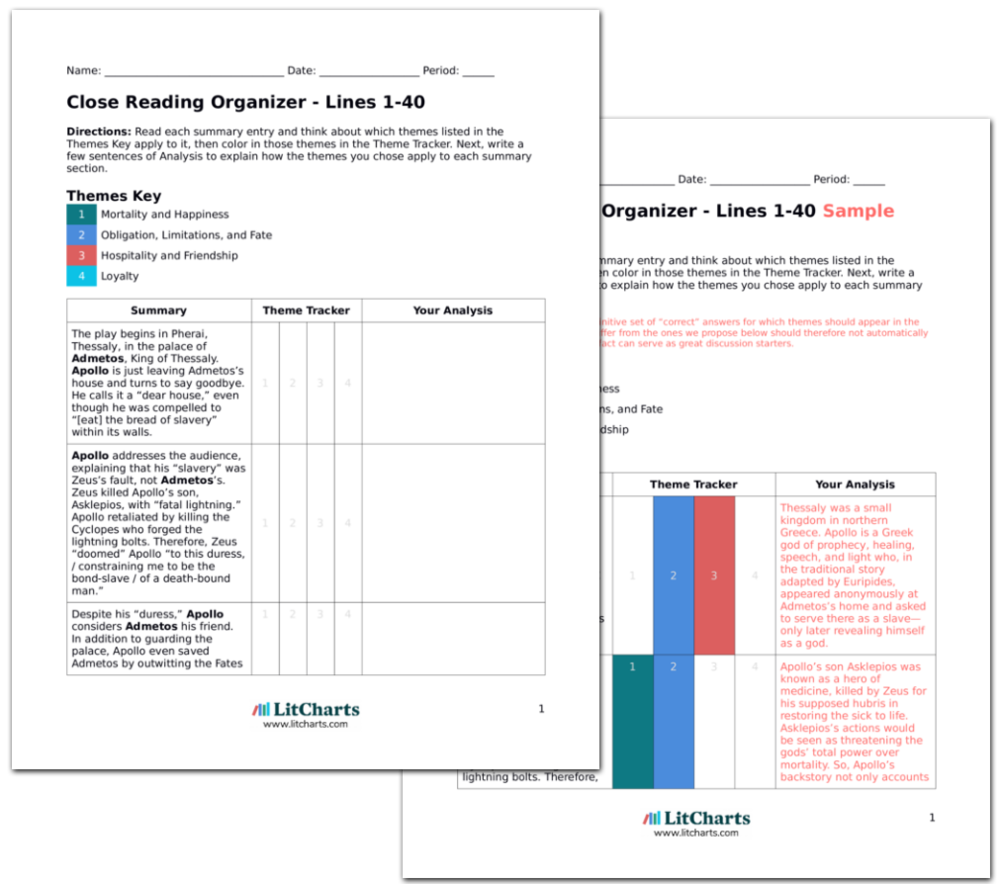