Chris Kyle uses many different kinds of guns over the course of American Sniper, and his role and subsequent fame as a sniper (a highly skilled soldier and marksman who shoots enemies from a concealed position) is essentially defined by guns. In general, guns symbolize maturity, machismo, and masculinity in the book. Kyle would even go on to write another book called American Gun: A History of the U.S. in Ten Firearms.

The American Sniper quotes below all refer to the symbol of Guns. For each quote, you can also see the other characters and themes related to it (each theme is indicated by its own dot and icon, like this one:

). Note: all page numbers and citation info for the quotes below refer to the HarperCollins edition of American Sniper published in 2013.
Prologue Quotes

Unlock with LitCharts A+
Get the entire American Sniper LitChart as a printable PDF.
"My students can't get enough of your charts and their results have gone through the roof." -Graham S.
Download 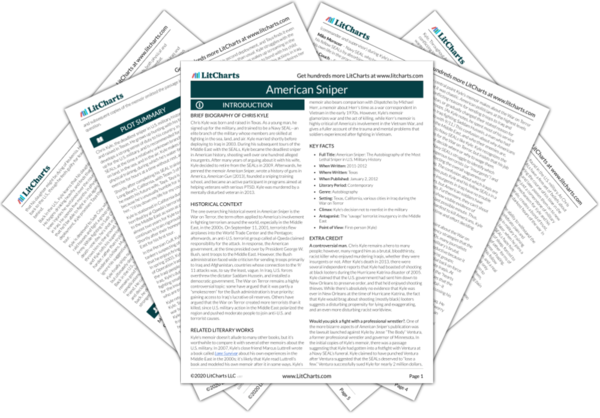 The timeline below shows where the symbol Guns appears in American Sniper. The colored dots and icons indicate which themes are associated with that appearance.

...named Chris Kyle—the narrator and author of the memoir—stares through the scope of his sniper rifle. He sees a woman step out of her house with her child and walk down... (full context)

...had a strong sense of justice, and has always considered himself a Christian. He’s loved guns for his entire life—even as a child, he hunted deer with his father. Kyle’s father... (full context)

...As a teenager, Kyle worked as a ranch-hand, tending bulls. As a boy, his “first gun” was the Daisy multi-pump BB rifle. At the age of seven or eight, Kyle received... (full context)

...a real cowboy, working on a ranch. During this period, Kyle continued to hone his rifle skills by shooting raccoons and other pests. He also learned how to train horses, a... (full context)

...where the captain tries to attack him. Kyle says, “I took the muzzle of my gun and struck the idiot in his chest. He went right down.” (full context)

...War of the 1990s. In Kuwait, Kyle is assigned to carry an M-60, a machine gun built for lightness and convenience. His cohorts nickname him “Tex.” (full context)

...Kyle enjoys riding his DPV through the sand, and notes that firing his “big machine gun was fun!” (full context)

While he’s back in the U.S., Kyle goes to sniper school. Guns have fascinated Kyle since he was a small child, and he knows that the SEAL... (full context)

...a moment to talk about the weapons he uses in Iraq. Sometimes, he uses the Mk-12, a gun that’s easy to handle and assemble. On other occasions, he prefers the Mk-11,... (full context)

...about the gear he carried with him in Iraq. He wore body armor, and carried pistols in his thigh holster. He also carried a “blowout kit”—i.e., medical equipment. Unlike most soldiers... (full context)

...in Iraq, the insurgents, are “savage and well-armed.” The Marines raid insurgent houses and find guns, missiles, and other weapons. Kyle also notes that the insurgents were deadly not just because... (full context)

...follow him away from the house, Kyle runs out, sees an insurgent with a machine gun, and fires at him. Suddenly, Kyle turns and sees that none of the Marines have... (full context)

One day, Kyle snipes a man walking down the street, holding a heavy gun. Shortly afterwards, Kyle learns that he’s going to be investigated for shooting the man—his widow... (full context)

...may or may not be harboring insurgents. Suddenly, Kyle notices that the laser on his gun isn’t working. Before he has a chance to replace the battery, he notices an insurgent... (full context)

...the area, trains new American snipers. However, his greatest passion is still shooting his own gun. Luckily, he thinks, there are lots of insurgents walking through the streets of Ramadi. Indeed,... (full context)