Get LitCharts A+
LitCharts assigns a color and icon to each theme in Americanah, which you can use to track the themes throughout the work.

While Americanah is a tale of individual characters, it is also a sweeping analysis and critique of race and racism in America, England, and Nigeria, and the novel is peppered with Adichie’s biting observations on the subject. In Nigeria, Ifemelu doesn’t really think of herself as black. There is still a racial hierarchy in Nigerian culture, however, as light-skinned or mixed-race people are considered more attractive, and people use products to make their skin lighter. But when Ifemelu and Obinze go to America and England respectively, they find that racism is a much more pervasive part of life. Ifemelu first truly discovers race—and starts to consider herself black—only when she is forced to adapt to America’s complex racial politics. Adichie gives many examples of racist incidents, like Obinze being mocked for scraping his knee because he’s a “knee-grow,” people assuming the white Curt couldn’t be dating Ifemelu, or patients refusing to have Aunty Uju as their doctor. Ifemelu then starts a blog about race, and Adichie scatters blog posts throughout the novel. Through these posts Adichie is able to be most outwardly critical of racism in America: Ifemelu describes many microaggressions, incidents, and assumptions she has experienced that many whites wouldn’t always notice or understand, and she is able to do so bluntly and humorously. Many of these posts (as well as Ifemelu’s relationship with Blaine) involve navigating the differing experiences of African-Americans and “American-Africans,” or Africans who come to live in America and experience racial prejudice for the first time.

Most of the novel’s discussion of race involves pointing out racism and humanizing it (both the victims and the perpetrators), but Adichie also gives some examples of people overcoming racism through close friendship and romantic love. Characters like Curt, Kimberly, and Nigel achieve this to varying degrees of success in their relationships with Ifemelu and Obinze. As Shan complains about in describing her own book, most editors don’t want a novel that focuses on race—the issue must somehow be made more “complex” or described so beautifully that the reader doesn’t even notice it. With this Adichie comments on her own work, declaring that race and racism are big and complicated enough issues on their own, and they deserve a novel as sprawling and complex as Americanah. 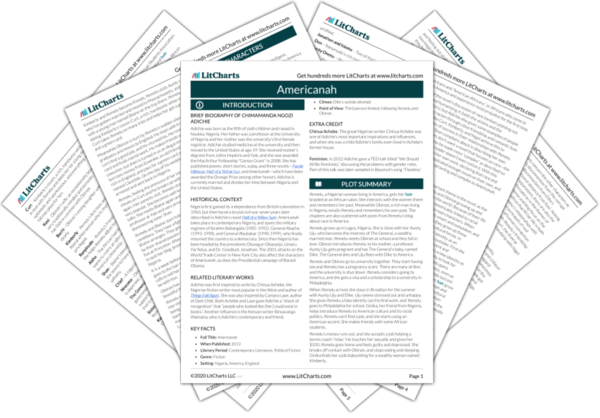 Race and Racism Quotes in Americanah

Below you will find the important quotes in Americanah related to the theme of Race and Racism.
Chapter 2 Quotes

And after you register your own company, you must find a white man. Find one of your white friends in England. Tell everybody he is your General Manager. You will see how doors will open for you because you have an oyinbo General Manager. Even Chief has some white men that he brings in for show when he needs them. That is how Nigeria works. I’m telling you.

Later, she said, “I have to take my braids out for my interviews and relax my hair… If you have braids, they will think you are unprofessional.”

“So there are no doctors with braided hair in America?” Ifemelu asked.

“I have told you what they told me. You are in a country that is not your own. You do what you have to do if you want to succeed.”

There it was again, the strange naivete with which Aunty Uju had covered herself like a blanket. Sometimes, while having a conversation, it would occur to Ifemelu that Aunty Uju had deliberately left behind something of herself, something essential, in a distant and forgotten place. Obinze said it was the exaggerated gratitude that came with immigrant insecurity.

They mimicked what Americans told them: You speak such good English. How bad is AIDS in your country? It’s so sad that people live on less than a dollar a day in Africa. And they themselves mocked Africa, trading stories of absurdity, of stupidity, and they felt safe to mock, because it was a mockery born of longing, and of the heartbroken desire to see a place made whole again. Here, Ifemelu felt a gentle, swaying sense of renewal. Here, she did not have to explain herself.

“No, she isn’t.” Ifemelu paused. “You know, you can just say ‘black.’ Not every black person is beautiful.”

Kimberly was taken aback, something wordless spread on her face and then she smiled, and Ifemelu would think of it as the moment they became, truly, friends.

It was like a conjurer’s trick, the swift disappearance of his hostility. His face sank into a grin. She, too, was the help. The universe was once again arranged as it should be.

“How are you doing? Know where she wants me to start?” he asked.

“Upstairs,” she said, letting him in, wondering how all that cheeriness could have existed earlier in his body. She would never forget him… and she would begin the blog post “Sometimes in America, Race is Class” with the story of his dramatic change, and end with: It didn’t matter to him how much money I had. As far as he was concerned I did not fit as the owner of that stately house because of the way I looked. In America’s public discourse, “Blacks” as a whole are often lumped with “Poor Whites.” Not Poor Blacks and Poor Whites. But Blacks and Poor Whites. A curious thing indeed.

“Just a little burn,” the hairdresser said. “But look how pretty it is. Wow, girl, you’ve got the white-girl swing!”

Her hair was hanging down rather than standing up, straight and sleek, parted at the side and curving to a slight bob at her chin. The verve was gone. She did not recognize herself. She left the salon almost mournfully; while the hairdresser had flat-ironed the ends, the smell of burning, of something organic dying which should not have died, had made her feel a sense of loss.

The wind blowing across the British Isles was odorous with fear of asylum seekers, infecting everybody with the panic of impending doom, and so articles were written and read, simply and stridently, as though the writers lived in a world in which the present was unconnected to the past, and they had never considered this to be the normal course of history: the influx into Britain of black and brown people from countries created by Britain. Yet he understood. It had to be comforting, this denial of history.

So if you’re going to write about race, you have to make sure it’s so lyrical and subtle that the reader who doesn’t read between the lines won’t even know it’s about race. You know, a Proustian meditation, all watery and fuzzy, that at the end just leaves you feeling watery and fuzzy.

“You know why Ifemelu can write that blog, by the way?” Shan said. “Because she’s African. She’s writing from the outside. She doesn’t really feel all the stuff she’s writing about. It’s all quaint and curious to her. So she can write it and get all these accolades and get invited to give talks. If she were African American, she’d just be labeled angry and shunned.”

Her phone beeped with a text from Dike.

I can’t believe it. My president is black like me. She read the text a few times, her eyes filling with tears.