Get LitCharts A+
LitCharts assigns a color and icon to each theme in Amusing Ourselves to Death, which you can use to track the themes throughout the work.

Much of the book’s argument takes the form of a historical account that tracks the development of public discourse over time. Postman’s historical account is actually quite vast in scope: The Iliad, Plato, Jesus, the Protestant Reformation, and American history from its colonization to the present are all included in the story Postman tells about the history of media and their effects on culture. His argument essentially articulates how, in many ways, the history of public discourse is the history of different media forms achieving dominance. The Iliad was the product of an oral culture, while in Plato’s day, the rise of writing was at the center of a cultural shift. The Protestant Reformation was then made possible by the printing press, and in America, there is now a shift occurring between print and image.

Along with providing a lens through which to view the history of public discourse, Postman is also invested in demonstrating that this history, especially in America, is headed in a certain direction. In other words, not all kind of discourse are, in Postman’s account, created equal. His historical account then asks us to wonder about the damage potentially caused by the legacy of television in American history.

The History of Public Discourse and Media ThemeTracker

The ThemeTracker below shows where, and to what degree, the theme of The History of Public Discourse and Media appears in each chapter of Amusing Ourselves to Death. Click or tap on any chapter to read its Summary & Analysis.
How often theme appears:
chapter length:
Chapter
Foreward
Fwd
Chapter 1
1
Chapter 2
2
Chapter 3
3
Chapter 4
4
Chapter 5
5
Chapter 6
6
Chapter 7
7
Chapter 8
8
Chapter 9
9
Chapter 10
10
Chapter 11
11
Get the entire Amusing Ourselves LitChart as a printable PDF.
"My students can't get enough of your charts and their results have gone through the roof." -Graham S.
Download 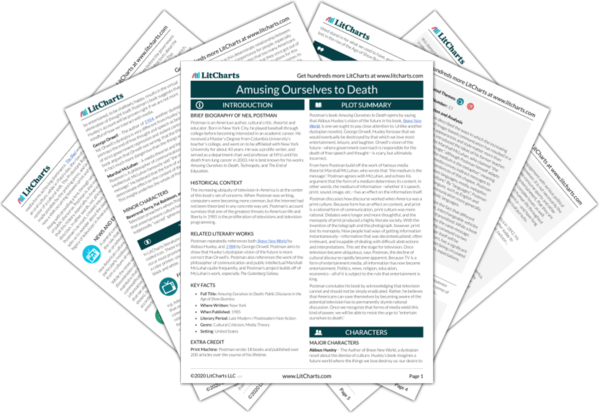 Below you will find the important quotes in Amusing Ourselves to Death related to the theme of The History of Public Discourse and Media.
Chapter 1 Quotes

When Charles Dickens visited America in 1842, his reception equaled the adulation we offer today to television stars, quarter- backs, and Michael Jackson…

Americans are the best entertained and quite likely the least well-informed people in the Western world.