Download this LitChart! (PDF)
Teachers and parents! Struggling with distance learning? Our Teacher Edition on An Encounter can help.

Welcome to the LitCharts study guide on James Joyce's An Encounter. Created by the original team behind SparkNotes, LitCharts are the world's best literature guides.

A concise biography of James Joyce plus historical and literary context for An Encounter.

A quick-reference summary: An Encounter on a single page.

In-depth summary and analysis of every of An Encounter. Visual theme-tracking, too.

Explanations, analysis, and visualizations of An Encounter's themes.

An Encounter's important quotes, sortable by theme, character, or .

Description, analysis, and timelines for An Encounter's characters.

Explanations of An Encounter's symbols, and tracking of where they appear.

An interactive data visualization of An Encounter's plot and themes.

James Joyce was born into a well-off Catholic family in Dublin in 1882, the eldest of ten surviving children. But his father lost his job and began drinking heavily when Joyce was around ten, and the family sank into poverty, moving and changing schools often. With his father’s connections, Joyce still managed to eventually attend Belvedere College, one of the best Jesuit schools in Dublin, and his Catholic education left him torn between his feeling that the Church repressed him and his love for its thinkers, symbols, and tradition of intellectual rigor. Joyce attended University College Dublin, where he studied multiple languages, wrote plays and poetry, and published in Irish literary magazines. After graduation, he moved to Paris to study medicine but soon gave up, occasionally appealing to his family for money to support him despite their poverty. In 1903, he returned home to see his dying mother, but refused her dying wish that he make confession and take communion. From 1904 on, Joyce reworked details from his own life as well as wide-ranging thoughts about the state of Ireland, literature, and the human condition into Dubliners (1914), a collection of short stories, and the novels A Portrait of the Artist as A Young Man (1916), Ulysses (1922), and Finnegans Wake (1939). Joyce’s writing was incredibly controversial, and was occasionally banned for obscenity, but had a major impact on the Modernist movement of the early 20th century. Just two years after the publication of Finnegans Wake, Joyce died after a surgery on a perforated ulcer in Germany in 1941.
Get the entire An Encounter LitChart as a printable PDF.
"My students can't get enough of your charts and their results have gone through the roof." -Graham S.
Download 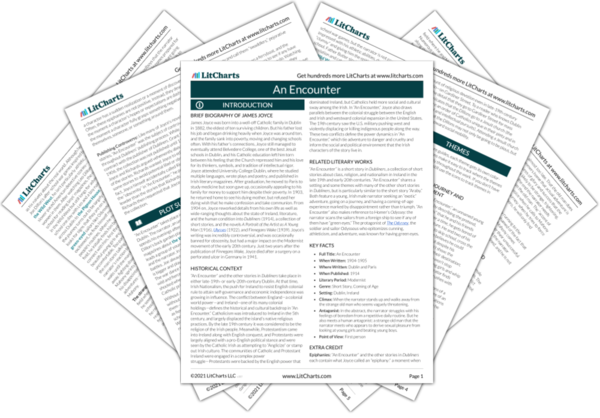 Historical Context of An Encounter

“An Encounter” and the other stories in Dubliners take place in either late-19th- or early-20th-century Dublin. At that time, Irish Nationalism, the push for Ireland to resist English colonial rule to attain self-governance and economic independence was growing in influence. The conflict between England—a colonial world power—and Ireland—one of its many colonial holdings—defines the historical and cultural backdrop in “An Encounter.” Catholicism was introduced to Ireland in the 5th century, and largely displaced the island’s native religious practices. By the late 19th century it was considered to be the religion of the Irish people. Meanwhile, Protestantism came into Ireland along with English conquest, and Protestants were largely aligned with a pro-English political stance and were seen by the Catholic Irish as attempting to “Anglicize” or stamp out Irish culture. The communities of Catholic and Protestant Ireland were engaged in a complex power struggle—Protestants were backed by the English power that dominated Ireland, but Catholics held more social and cultural sway among the Irish. In “An Encounter,” Joyce also draws parallels between the colonial struggle between the English and Irish and westward colonial expansion in the United States. The 19th century saw the U.S. military pushing west and violently displacing or killing indigenous people along the way. These two conflicts define the power dynamics in “An Encounter,” which tie adventure to danger and cruelty and inform the social and political environment that the Irish characters of the story live in.

Other Books Related to An Encounter

“An Encounter” is a short story in Dubliners, a collection of short stories about class, religion, and nationalism in Ireland in the late 19th and early 20th centuries. “An Encounter” shares a setting and some themes with many of the other short stories in Dubliners, but is particularly similar to the short story “Araby.” Both feature a young, Irish male narrator seeking an “exotic” adventure, going on a journey, and having a coming-of-age experience marked by disappointment rather than triumph. “An Encounter” also makes reference to Homer’s Odyssey: the narrator scans the sailors from a foreign ship to see if any of them have “green eyes.” The protagonist of The Odyssey, the soldier and sailor Odysseus who epitomizes cunning, athleticism, and adventure, was known for having green eyes.
Key Facts about An Encounter

Extra Credit for An Encounter

Epiphanies: “An Encounter” and the other stories in Dubliners each contain what Joyce called an “epiphany:” a moment when a character has a sudden realization or a moment of discovery. Often, these epiphanies are not positive. Instead, they describe the moment a character’s hopes or expectations are dashed, or the moment a character fully grasps something negative about themselves, someone, or something around them.

Publishing Controversy: Like many of Joyce’s novels and stories, “An Encounter” was the subject of controversy throughout Dubliners’ publishing process. While Joyce signed a contract with the publisher of Dubliners, Grant Richards, in 1906, the collection was not published until 1914 because Joyce and Richards argued vehemently about how to edit each of the stories. Richards wanted Joyce to edit passages out of some stories to avoid potential libel or obscenity lawsuits. In fact, Joyce himself accidentally called Richards’s attention to the “obscenity” in “An Encounter;” he pointed out that it was lewder than the stories that Richards took issue with, and Richards then requested that Joyce cut the whole story from the collection. 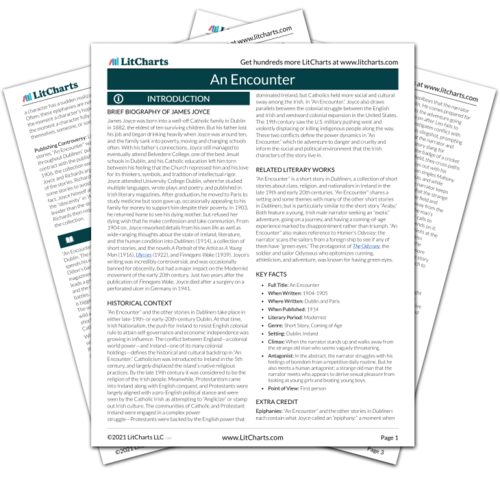 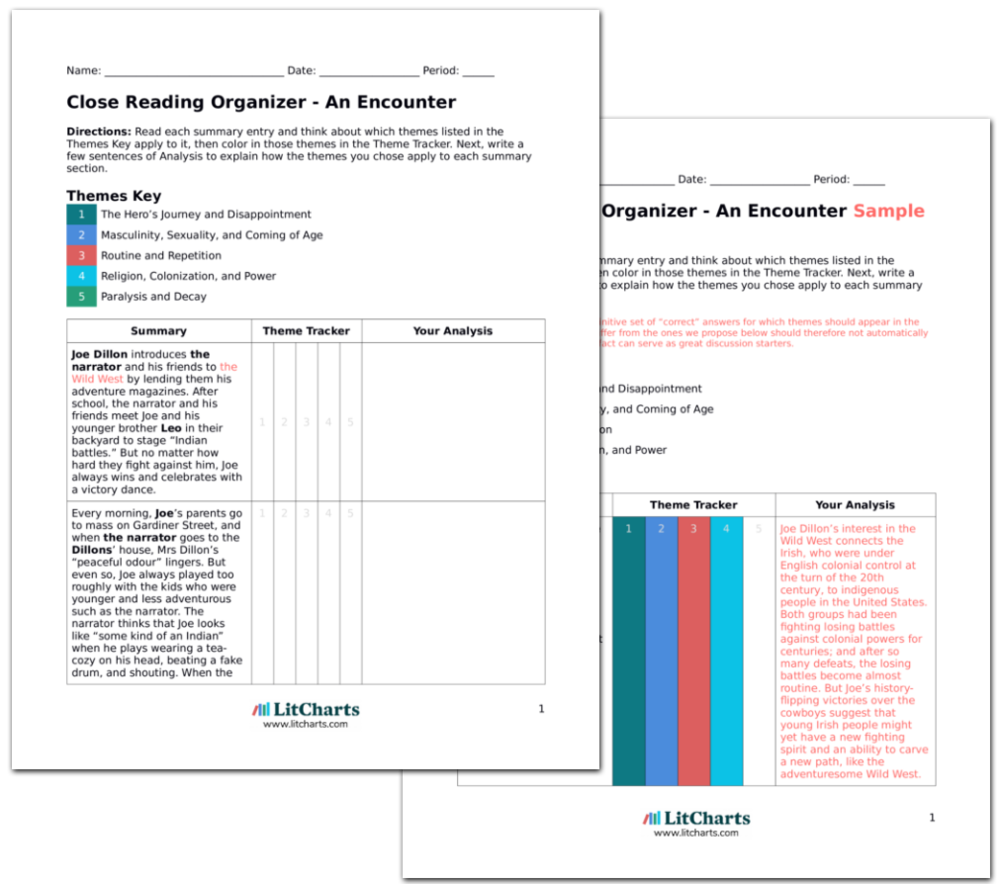