Download this LitChart! (PDF)
Teachers and parents! Struggling with distance learning? Our Teacher Edition on An Enemy of the People can help.

Welcome to the LitCharts study guide on Henrik Ibsen's An Enemy of the People. Created by the original team behind SparkNotes, LitCharts are the world's best literature guides.

An Enemy of the People: Introduction

A concise biography of Henrik Ibsen plus historical and literary context for An Enemy of the People.

An Enemy of the People: Plot Summary

A quick-reference summary: An Enemy of the People on a single page.

An Enemy of the People: Detailed Summary & Analysis

In-depth summary and analysis of every act of An Enemy of the People. Visual theme-tracking, too.

An Enemy of the People: Themes

Explanations, analysis, and visualizations of An Enemy of the People's themes.

An Enemy of the People: Quotes

An Enemy of the People's important quotes, sortable by theme, character, or act.

An Enemy of the People: Characters

Description, analysis, and timelines for An Enemy of the People's characters.

An Enemy of the People: Symbols

Explanations of An Enemy of the People's symbols, and tracking of where they appear.

An Enemy of the People: Theme Wheel

An interactive data visualization of An Enemy of the People's plot and themes.

Born in 1828 to a family of patrician merchants, Henrik Ibsen enjoyed an affluent childhood until he was seven, when his father’s business failed. Forced to leave school, Ibsen trained as a pharmacist before moving now Kristiania (now Oslo), attempting and failing to enter the university, and committing himself to writing his first play. Ibsen’s first plays gained little attention, but he gained experience by working at a theater as a director and producer. At age thirty Ibsen married Suzannah Thoresen and soon had a son, Sigurd (who eventually became Norway’s Prime Minister); frustrated by their financial circumstances, the family moved to Italy, where Ibsen wrote some of his more famous plays, including Brand and Peer Gynt. The family eventually moved to Dresden, Germany, where Ibsen wrote his best-known play, A Doll's House, a withering critique of women’s subjugation in marriage. Twenty-seven years after his departure, Ibsen returned to Norway as a controversial but respected playwright. He died in Kristiania in 1906.
Get the entire An Enemy of the People LitChart as a printable PDF.
"My students can't get enough of your charts and their results have gone through the roof." -Graham S.
Download 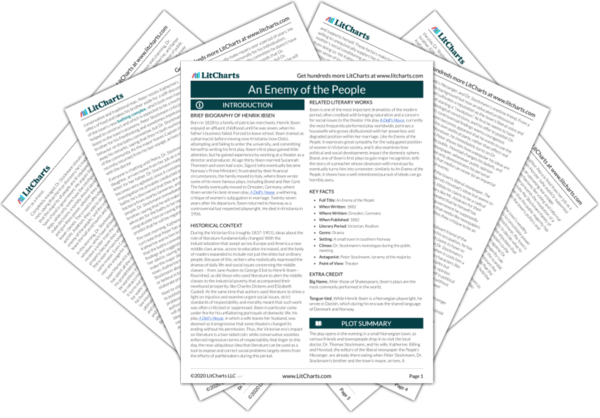 Historical Context of An Enemy of the People

During the Victorian Era (roughly 1837-1901), ideas about the role of literature fundamentally changed. With the industrialization that swept across Europe and America a new middle class arose, access to education increased, and the body of readers expanded to include not just the elites but ordinary people. Because of this, writers who realistically expressed the dramas of daily life and social issues concerning the middle classes – from Jane Austen to George Eliot to Henrik Ibsen – flourished, as did those who used literature to alert the middle classes to the industrial poverty that accompanied their newfound prosperity, like Charles Dickens and Elizabeth Gaskell. At the same time that authors used literature to shine a light on injustice and examine urgent social issues, strict standards of respectability and morality meant that such work was often criticized or suppressed. Ibsen in particular came under fire for his unflattering portrayals of domestic life; his play A Doll's House, in which a wife leaves her husband, was deemed so transgressive that some theaters changed its ending without his permission. Thus, the Victorian era’s impact on literature is a two-sided coin: while conservative societies enforced regressive norms of respectability that linger to this day, the now-ubiquitous idea that literature can be used as a tool to expose and correct social problems largely stems from the efforts of pathbreakers during this period.

Other Books Related to An Enemy of the People

Ibsen is one of the most important dramatists of the modern period, often credited with bringing naturalism and a concern for social issues to the theater. His play A Doll's House, currently the most frequently performed play worldwide, portrays a housewife who grows disillusioned with her powerless and degraded position within her marriage. Like An Enemy of the People, it expresses great sympathy for the subjugated position of women in Victorian society, and it also examines how political and social developments impact the domestic sphere. Brand, one of Ibsen’s first plays to gain major recognition, tells the story of a preacher whose obsession with moral purity eventually turns him into a monster; similarly to An Enemy of the People, it shows how a well-intentioned pursuit of ideals can go horribly awry.
Key Facts about An Enemy of the People

Extra Credit for An Enemy of the People

Big Name. After those of Shakespeare, Ibsen’s plays are the most commonly performed in the world.

Tongue-tied. While Henrik Ibsen is a Norwegian playwright, he wrote in Danish, which during his era was the shared language of Denmark and Norway. 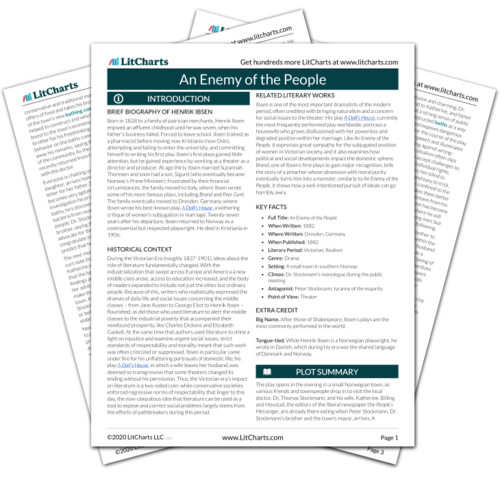 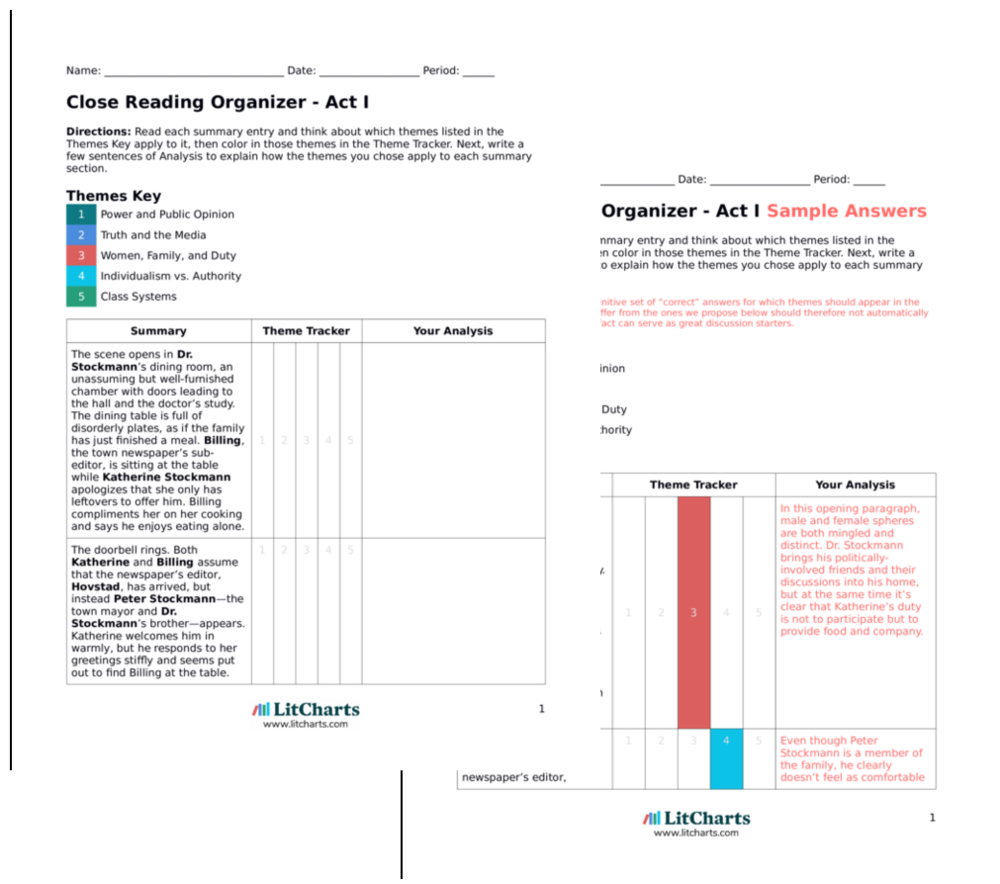