An Episode of War
Introduction + Context
Plot Summary
Detailed Summary & Analysis
An Episode of War
Themes
All Themes Rank vs. Human Judgment Inexperience and Shame War, Clarity, and Beauty Nature and Human Insignificance
Quotes
Characters
All Characters The Lieutenant The Surgeon The Officer The Orderly-Sergeant The Lieutenant’s Family
Terms
All Terms Battery Breastwork Bearer of the corps standard Charger
Symbols
All Symbols The Forest The Schoolhouse

Download this LitChart! (PDF)
Teachers and parents! Struggling with distance learning? Our Teacher Edition on An Episode of War can help.

Welcome to the LitCharts study guide on Stephen Crane's An Episode of War. Created by the original team behind SparkNotes, LitCharts are the world's best literature guides.

An Episode of War: Introduction

A concise biography of Stephen Crane plus historical and literary context for An Episode of War.

An Episode of War: Plot Summary

A quick-reference summary: An Episode of War on a single page.

In-depth summary and analysis of every of An Episode of War. Visual theme-tracking, too.

An Episode of War: Themes

Explanations, analysis, and visualizations of An Episode of War's themes.

An Episode of War: Quotes

An Episode of War's important quotes, sortable by theme, character, or .

An Episode of War: Characters

Description, analysis, and timelines for An Episode of War's characters.

Description, analysis, and timelines for An Episode of War's terms.

An Episode of War: Symbols

Explanations of An Episode of War's symbols, and tracking of where they appear.

An Episode of War: Theme Wheel

An interactive data visualization of An Episode of War's plot and themes.

Born in New Jersey to a religious family, Crane came from deeply rooted American stock. One ancestor was the 17th-century founder of New Haven Colony, while another was a delegate at the first meeting of Congress in Philadelphia. Though sickly as a child, Crane loved baseball but not academics. He tried some years studying at a university (“a waste of time”) but preferred sports and fraternity meetings to classes. He dropped out, took up local journalism in New Jersey, and moved to New York, where his examinations into slum life developed into his social-realist tell-all novel, Maggie: A Girl of the Streets (1893). Though today a classic of journalism-fiction crossover, the book sold poorly in its time, so Crane turned his attention to a historical fascination of his: the American Civil War. While churning out short stories for money, Crane put together his novel about a guilt-wracked Civil War deserter, The Red Badge of Courage (1895), which proved an overnight success. With his newfound notoriety, Crane became a war correspondent, traveling the world to write about the Greco-Turkish War and later the Spanish-American War. He moved to England, where his fame was strongest, with his new partner, the journalist Dora Taylor. His health degraded from these extensive travels, however, and tuberculosis claimed his life at the age of 30. In his The Red Badge of Courage (which has never fallen out of print) and his many short stories on the subject, Crane is remembered as America’s foremost chronicler of the Civil War. His psychological realism and his use of irony place him in the school of American Naturalism. He helped paved the way for Modernist writers and for later explorations into wartime consciousness, especially in the work of Ernest Hemingway.
Get the entire An Episode of War LitChart as a printable PDF.
"My students can't get enough of your charts and their results have gone through the roof." -Graham S.
Download it! 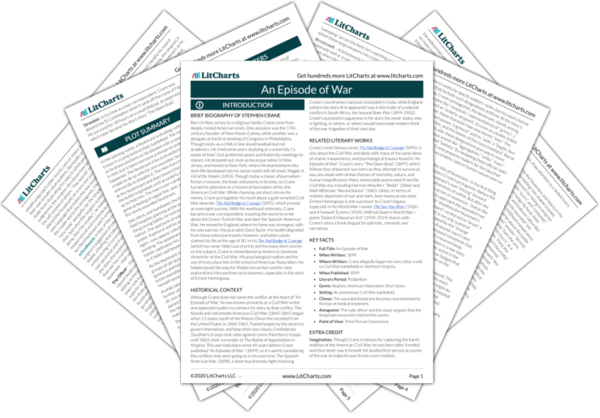 Historical Context of An Episode of War

Although Crane does not name the conflict at the heart of “An Episode of War,” he was known primarily as a Civil War writer and expected readers to connect his story to that conflict. The bloody and nationwide American Civil War (1860-1865) began when 11 states south of the Mason-Dixon line seceded from the United States in 1860-1861. Fueled largely by the desire to govern themselves and keep their own slaves, Confederate (Southern) troops took sides against Union (Northern) troops until 1865, their surrender at The Battle of Appomattox in Virginia. This war took place some 40 years before Crane published “An Episode of War” (1899), so it’s worth considering the conflicts that were going on in his own time. The Spanish-American War (1898), a short but dramatic fight involving Crane’s countrymen, had just concluded in Cuba, while England (where the story first appeared) was in the midst of a colonial conflict in South Africa, the Second Boer War (1899-1902). Crane’s purposeful vagueness in his story (he never states who is fighting, or where, or when) would have made readers think of the war tragedies of their own day.

Other Books Related to An Episode of War

Crane’s most famous novel, The Red Badge of Courage (1895), is also about the Civil War and deals with many of the same ideas of shame, inexperience, and psychological trauma found in “An Episode of War.” Crane’s story “The Open Boat” (1897), which follows four shipwreck survivors as they attempt to survive at sea, also deals with similar themes of mortality, nature, and human insignificance. Many memorable poems exist from the Civil War era, including Herman Melville’s “Shiloh” (1866) and Walt Whitman “Reconciliation” (1865-1866). In terms of realistic depictions of war and stark, bare-bones prose style, Ernest Hemingway is one successor to Crane’s legacy, especially in his World War I novels The Sun Also Rises (1926) and A Farewell To Arms (1929). Wilfred Owen’s World War I poem “Dulce Et Decorum Est” (1918-1919) shares with Crane’s story a frank disgust for patriotic, romantic war narratives.
Key Facts about An Episode of War

Extra Credit for An Episode of War

Imagination. Though Crane is famous for capturing the harsh realities of the American Civil War, he was born after it ended and thus never saw it himself. He studied first-person accounts of the war to make his own fiction more realistic.

Stranded. In his time as a war correspondent, Crane was aboard the SS Commodore when it sank off the coast of Florida. He survived for 30 hours on a small lifeboat, an experience which later became his short story “The Open Boat.” 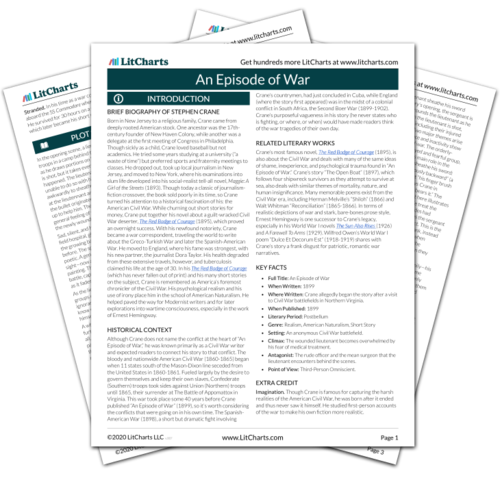 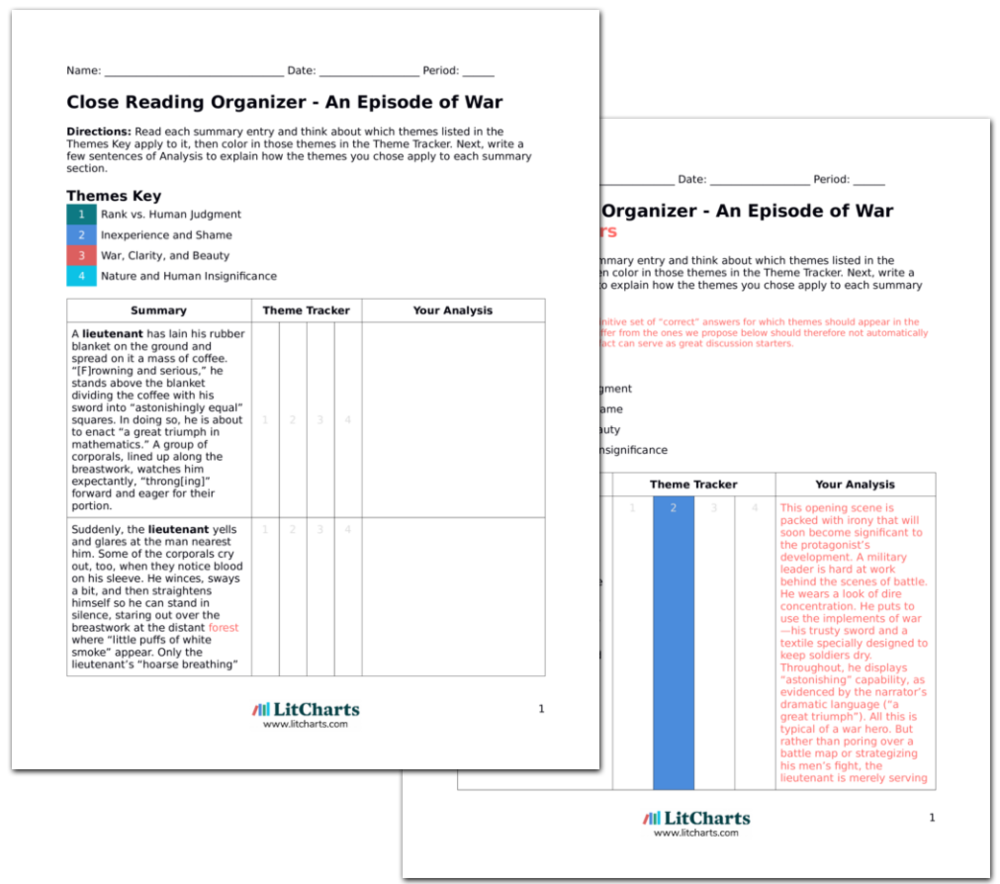