Download this LitChart! (PDF)
Teachers and parents! Struggling with distance learning? Our Teacher Edition on An Unquiet Mind can help.

Welcome to the LitCharts study guide on Kay Redfield Jamison's An Unquiet Mind. Created by the original team behind SparkNotes, LitCharts are the world's best literature guides.

A concise biography of Kay Redfield Jamison plus historical and literary context for An Unquiet Mind.

A quick-reference summary: An Unquiet Mind on a single page.

In-depth summary and analysis of every chapter of An Unquiet Mind. Visual theme-tracking, too.

Explanations, analysis, and visualizations of An Unquiet Mind's themes.

Description, analysis, and timelines for An Unquiet Mind's characters.

Description, analysis, and timelines for An Unquiet Mind's terms.

Explanations of An Unquiet Mind's symbols, and tracking of where they appear.

An interactive data visualization of An Unquiet Mind's plot and themes.

Kay Redfield Jamison was born into a military family on June 22nd, 1946. By the time she was in fifth grade, her family had already lived in Florida, Puerto Rico, California, Tokyo, and Washington, D.C. Jamison attended elementary school near the Andrews Air Force Base, worked as a candy striper in and around the D.C. area throughout her early years of high school, and she moved with her family to California in 1961 so that her father could accept a position as a scientist at the Rand Corporation. Jamison attended Pacific Palisades High School and learned to adjust to her new life on the West Coast—but her father’s increasingly difficult battles with mental illness and alcoholism took a toll on Jamison and her family. Jamison herself was, from a young age, the frequent victim of erratic periods of mania followed by stultifying periods of depression—but she chose to ignore her symptoms, which emerged during her senior year of high school, and pursue an advanced education in clinical psychology at the University of California Los Angeles. Throughout her years at UCLA, Jamison battled the tides of mania and depression, struggled to stay on the powerful mood-stabilizing drug lithium, and survived a suicide attempt—all while conducting vital research on mood disorders, helping patients survive their own struggles, and learning lessons about life, love, and the differences between the brain and the mind. Since 1993, Jamison has been a tenured professor of psychiatry at the John Hopkins University School of Medicine and has worked at the Mood Disorders Center since 2005. The author of seven books of nonfiction, memoir, and academic writing, Jamison has been a finalist for the Pulitzer Prize and the recipient of prestigious grants and awards such as the MacArthur “genius” grant and the Lewis Thomas Prize. Jamison has dedicated her life to understanding, destigmatizing, and educating others about the illness known as bipolar disorder.
Get the entire An Unquiet Mind LitChart as a printable PDF.
"My students can't get enough of your charts and their results have gone through the roof." -Graham S.
Download 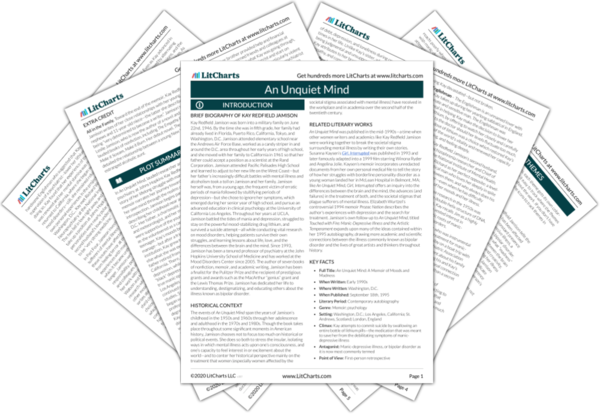 Historical Context of An Unquiet Mind

The events of An Unquiet Mind span the years of Jamison’s childhood in the 1950s and 1960s through her adolescence and adulthood in the 1970s and 1980s. Though the book takes place throughout some significant moments in American history, Jamison chooses not to focus too much on historical or political events. She does so both to stress the insular, isolating ways in which mental illness acts upon one’s consciousness, and one’s capacity to feel interest in or excitement about the world—and to center her historical perspective mainly on the treatment that women (especially women affected by the societal stigma associated with mental illness) have received in the workplace and in academia over the second half of the twentieth century.

Other Books Related to An Unquiet Mind

An Unquiet Mind was published in the mid-1990s—a time when other women writers and academics like Kay Redfield Jamison were working together to break the societal stigma surrounding mental illness by writing their own stories. Susanna Kaysen’s Girl, Interrupted was published in 1993 and later famously adapted into a 1999 film starring Winona Ryder and Angelina Jolie. Kaysen’s memoir incorporates unredacted documents from her own personal medical file to tell the story of how her struggles with borderline personality disorder as a young woman landed her in McLean Hospital in Belmont, MA; like An Unquiet Mind, Girl, Interrupted offers an inquiry into the differences between the brain and the mind, the advances (and failures) in the treatment of both, and the societal stigmas that plague sufferers of mental illness. Elizabeth Wurtzel’s controversial 1994 memoir Prozac Nation describes the author’s experiences with depression and the search for treatment. Jamison’s own follow-up to An Unquiet Mind, titled Touched with Fire: Manic-Depressive Illness and the Artistic Temperament expands upon many of the ideas contained within her 1995 autobiography, drawing more academic and scientific connections between the illness commonly known as bipolar disorder and the lives of great artists and thinkers throughout history.
Key Facts about An Unquiet Mind

Extra Credit for An Unquiet Mind

All in the Family. Toward the end of the memoir, Kay Redfield Jamison writes of her close relationships with her young nephews and 11-year-old niece—the latter she describes as being “very determined to become a writer.” Jamison’s niece is Leslie Jamison, who is now the author of a novel and several lauded books of nonfiction, including The Empathy Exams and Make it Scream, Make it Burn. Her debut novel, The Gin Closet, detailed the relationship between a young New Yorker and her estranged alcoholic aunt. 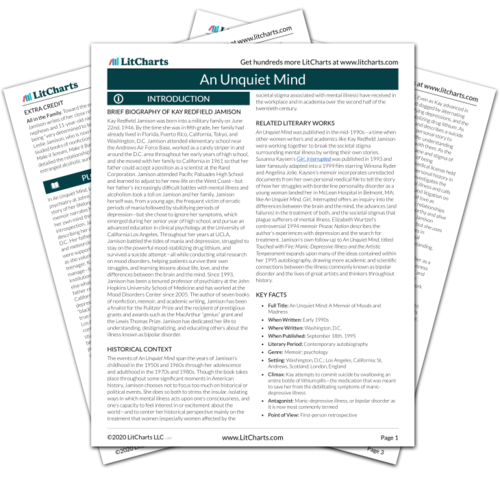 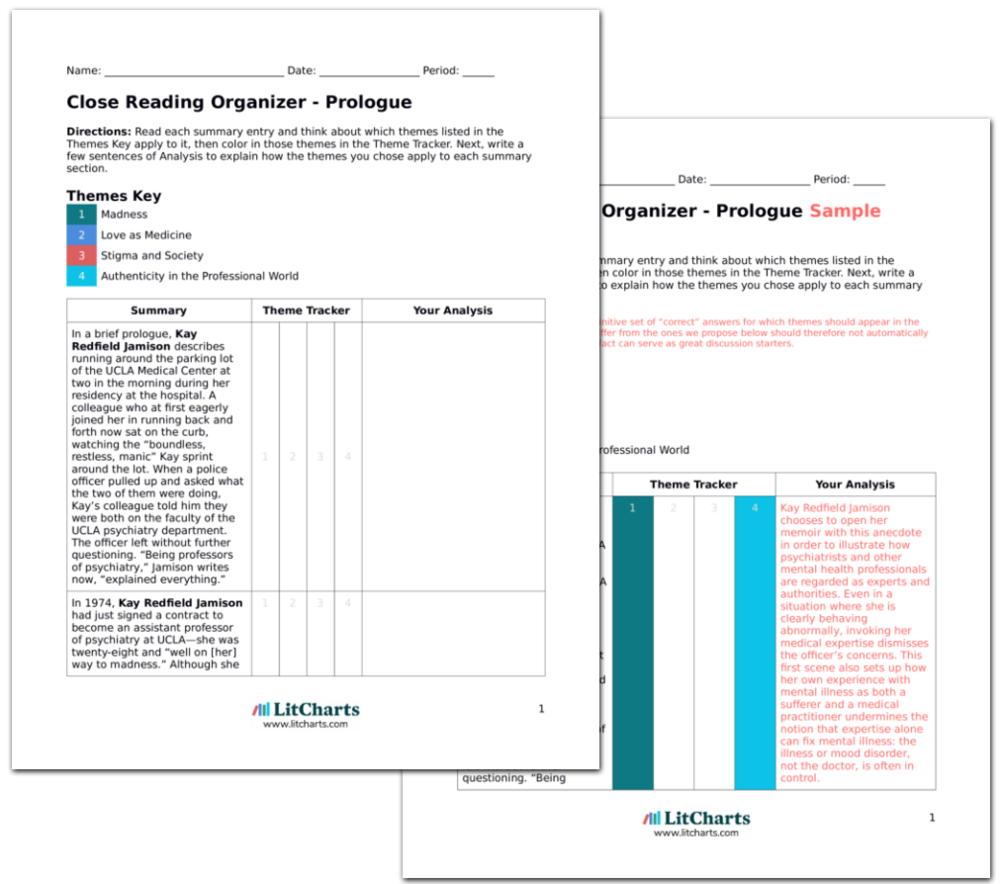