Annihilation is framed as a journalistic account of the 12th expedition into an uninhabited area known as “Area X.” The journal’s author and narrator, an unnamed biologist, is part of this expedition alongside three other women: a psychologist, an anthropologist, and a surveyor. Area X is a mysterious place. Accounts from previous expeditions have hinted at strange ecological events that occurred there, and the members of many expeditions have not returned at all, experienced hallucinations, or killed each other. The biologist eventually reveals that her husband was a part of the 11th expedition. When he suddenly returned to their home a year after leaving for the expedition, he had no memory of crossing the border out of Area X and little memory of his time in Area X. He died of cancer six months later.

The biologist then volunteered for the 12th expedition because she was drawn to its mystery and was curious about what may have happened to her husband. She underwent months of grueling training, set up by the Southern Reach (the government agency responsible for Area X), learning as much as she could about the Area. The psychologist also hypnotized the biologist and the other members so that they could remain calm while crossing the border into Area X. After entering the Area, it took the group four days of hiking to reach base camp.

On their first day at base camp, the expedition discovers a structure with a staircase spiraling underneath the ground. This is concerning to them, because the structure isn’t on any of their maps. Inside the staircase (which the biologist calls a “Tower” while the others call it a “tunnel”), they find eerie writing along the wall made from bioluminescent plant material, as well as slime and what look like tracks on the ground. While the biologist is examining the writing, she inhales spores from the plant material. Back at base camp, the biologist realizes that the psychologist is hypnotizing the group to control them; the biologist can see it now, because the spores have made her immune to hypnosis. Influenced by the psychologist, the group decides to return to the Tower the next day to explore its lower levels.

The next morning, the anthropologist is missing, and the psychologist—who seems visibly shaken—explains that the anthropologist was frightened by what they found in the Tower and decided to leave the mission and return to the border. The biologist senses the psychologist is lying, but they have no choice but to go along with her story. Back at the Tower, the biologist and surveyor descend once more while the psychologist stands watch at the top. This time, the biologist notices that the Tower seems to be breathing and has a heartbeat, as though it is alive. The surveyor doesn’t notice these things, however, and the biologist realizes that the spores have made her more aware of what is really happening in Area X.

A few levels down, they discover the anthropologist’s body: her face is burned, her jaw is broken, and her legs are half-melted. Next to her is a sample inside a vial, which the biologist collects. She and the surveyor also find another set of boot prints going back up. The biologist posits that the psychologist hypnotized the anthropologist to try to collect a sample from whatever is doing the writing (which she calls the “Crawler”), and the Crawler killed her. The surveyor isn’t sure whether she should believe the biologist, but when they return, they pull out their weapons in case they have to confront the psychologist. Surprisingly, the psychologist is gone, and back at base camp, she has taken half of their supplies and most of their weapons. That evening, the biologist notices a light coming from the nearby lighthouse and assumes that it is the psychologist. The biologist also feels a “brightness” spreading through her from the spores, heightening her senses and making her glow faintly.

The next day, the biologist sets out for the lighthouse while the surveyor stays behind. There, the biologist discovers hundreds of journals from past expeditions—far more than could have been written by only 12 expeditions—including her husband’s. Reading some of the journals, she realizes that most of what she and the other expeditions have been told about Area X is a lie, and she wonders why they keep sending expeditions there. In the journals, she reads of “unspeakable acts” committed by prior expeditions. She also finds a photograph of a man who she assumes to be the lighthouse keeper from before Area X was uninhabited.

The biologist then reads her husband’s journal. He was on an expedition with seven other men, and they discovered the journals in the lighthouse early in their expedition. The team then argued over what to do, knowing that they had been lied to. He and his expedition’s surveyor decided to investigate the northern border, but they traveled for a week with no sign of the border. They then returned to the lighthouse, only to find that their anthropologist and psychologist had killed each other and the linguist killed the biologist before descending into the Tower. Returning to the Tower, the biologist’s husband and his team’s surveyor observed doppelgängers of all the men (including themselves) except the psychologist entering the Tower. Seeing this, they decided to abandon their mission. The surveyor tried to return to the border where they crossed it, but the biologist’s husband was worried that returning that way would be a trap; instead, he decided to repair an abandoned boat and cross back by following the coastline.

After reading her husband’s account, the biologist returns to the Tower to find the Crawler. She encounters it, but her brain is unable to process what it looks like and she feels as though she is drowning and that her brain is being probed and burned. But she survives the encounter and continues to descend. Eventually, she comes in sight of a blurry gateway, like the one at the border when they crossed it. But the gateway makes her feel physically ill and unable to continue, so she decides to ascend the way she came. She passes the Crawler, this time without experiencing the pain and hallucinations, and when she looks back at it, she sees the face of the lighthouse keeper within the Crawler.

When the biologist emerges from the tower, she decides she will stay in Area X and seek out a sign of where her husband may have gone. She will not return home, leaving her journal and his journal in the lighthouse. 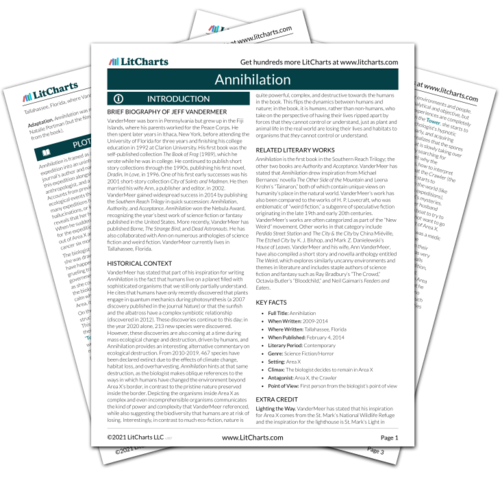 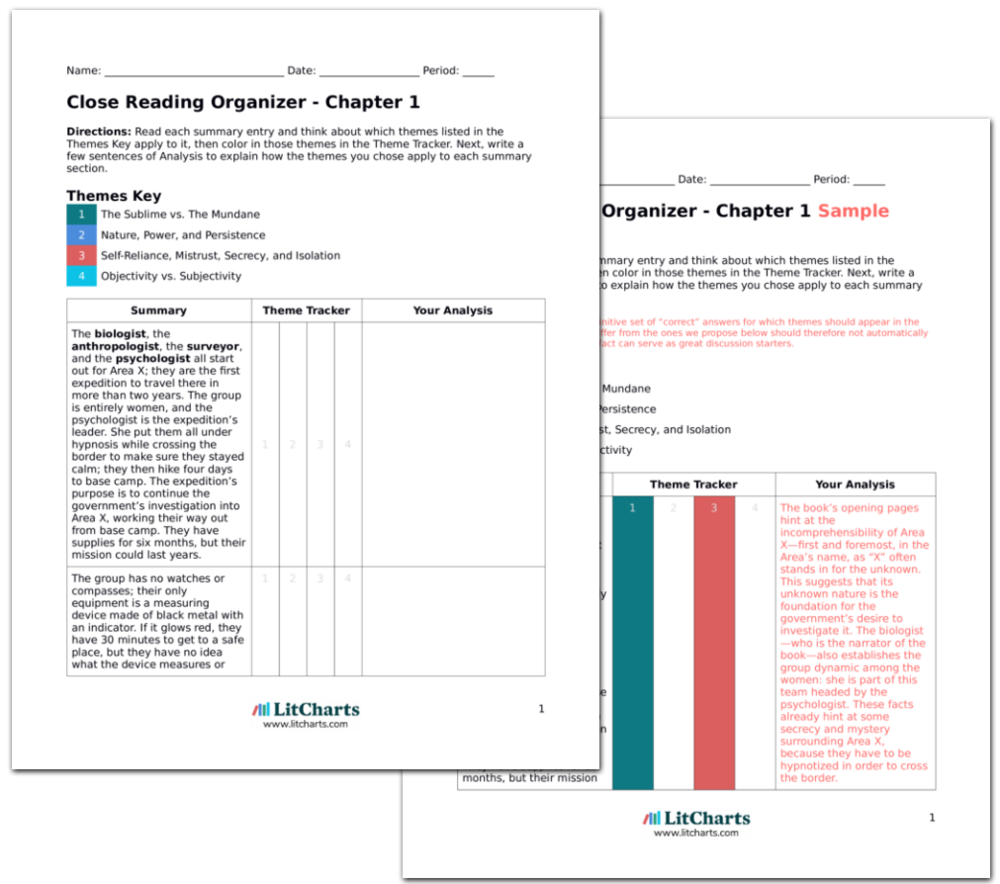