Download this LitChart! (PDF)
Teachers and parents! Struggling with distance learning? Our Teacher Edition on Another Brooklyn can help.

Welcome to the LitCharts study guide on Jacqueline Woodson's Another Brooklyn. Created by the original team behind SparkNotes, LitCharts are the world's best literature guides.

A concise biography of Jacqueline Woodson plus historical and literary context for Another Brooklyn.

A quick-reference summary: Another Brooklyn on a single page.

In-depth summary and analysis of every chapter of Another Brooklyn. Visual theme-tracking, too.

Explanations, analysis, and visualizations of Another Brooklyn's themes.

Another Brooklyn's important quotes, sortable by theme, character, or chapter.

Description, analysis, and timelines for Another Brooklyn's characters.

Explanations of Another Brooklyn's symbols, and tracking of where they appear.

An interactive data visualization of Another Brooklyn's plot and themes.

Woodson was born in Ohio in 1963, the third of four children. When she was a child, her family moved to South Carolina and later to Brooklyn, New York, where Woodson spent her adolescence—she now owns the building in Bushwick, Brooklyn in which she grew up. Woodson has written over 30 books, mostly for children, ranging from picture books to novels. She has also received numerous awards for her work, including the National Book Award. Woodson and her partner live in Brooklyn with their two children.
Get the entire Another Brooklyn LitChart as a printable PDF.
"My students can't get enough of your charts and their results have gone through the roof." -Graham S.
Download 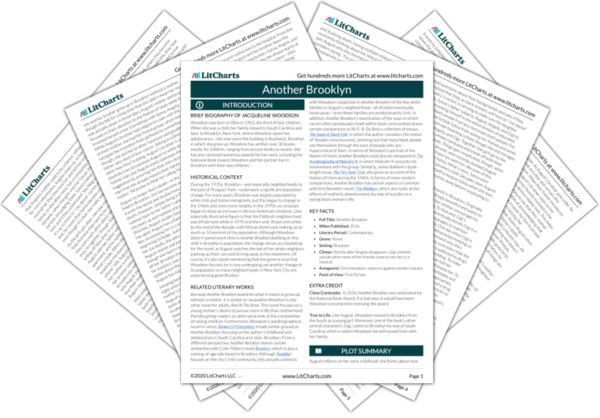 Historical Context of Another Brooklyn

During the 1970s, Brooklyn—and especially neighborhoods to the east of Prospect Park—underwent a significant population change. For many years, Brooklyn was largely populated by white Irish and Italian immigrants, but this began to change in the 1960s and, even more notably, in the 1970s, as censuses began to show an increase in African American residents. One especially illustrative figure is that the Flatbush neighborhood was 89 percent white in 1970 and then only 30 percent white by the end of the decade, with African Americans making up as much as 50 percent of the population. Although Woodson doesn’t spend much time in Another Brooklyn dwelling on this shift in Brooklyn’s population, the change serves as a backdrop for the novel, as August watches the last of her white neighbors packing up their cars and driving away to live elsewhere. Of course, it’s also worth mentioning that the general area that Woodson focuses on is now undergoing yet another change in its population as many neighborhoods in New York City are experiencing gentrification.

Other Books Related to Another Brooklyn

Because Another Brooklyn examines what it means to grow up without a mother, it is similar to Jacqueline Woodson’s only other novel for adults, Red At The Bone. This novel focuses on a young mother’s desire to pursue more in life than motherhood, thereby giving readers an alternative look at the complexities of raising children. Furthermore, Woodson’s autobiographical novel-in-verse, Brown Girl Dreaming, treads similar ground as Another Brooklyn, focusing on the author’s childhood and adolescence in South Carolina and, later, Brooklyn. From a different perspective, Another Brooklyn shares certain similarities with Colm Tóibín’s novel Brooklyn, which is also a coming-of-age tale based in Brooklyn. Although Brooklyn focuses on the city’s Irish community, this actually connects with Woodson’s depiction in Another Brooklyn of the few white families in August’s neighborhood—all of whom eventually move away—since these families are predominantly Irish. In addition, Another Brooklyn’s examination of the ways in which racism often perpetuates itself within black communities draws certain comparisons to W. E. B. Du Bois’s collection of essays, The Souls of Black Folk, in which the author considers the notion of “double-consciousness,” pointing out that many black people see themselves through the eyes of people who are hypercritical of them. In terms of Woodson’s portrait of the Nation of Islam, Another Brooklyn could also be compared to The Autobiography of Malcolm X, in which Malcolm X recounts his involvement with the group. Similarly, James Baldwin’s book-length essay, The Fire Next Time, also gives an account of the Nation of Islam during the 1960s. In terms of more modern comparisons, Another Brooklyn has certain aspects in common with Brit Bennett’s novel, The Mothers, which also looks at the effects of motherly abandonment (by way of suicide) on a young black woman’s life.
Key Facts about Another Brooklyn

Extra Credit for Another Brooklyn

Close Contender. In 2016, Another Brooklyn was nominated for the National Book Award. If it had won, it would have been Woodson’s second time receiving the award.

True to Life. Like August, Woodson moved to Brooklyn from the South as a young girl. Moreover, one of the book’s other central characters, Gigi, comes to Brooklyn by way of South Carolina, which is where Woodson herself moved from with her family. 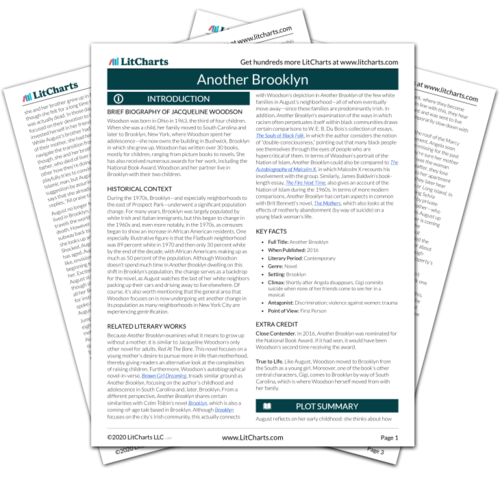 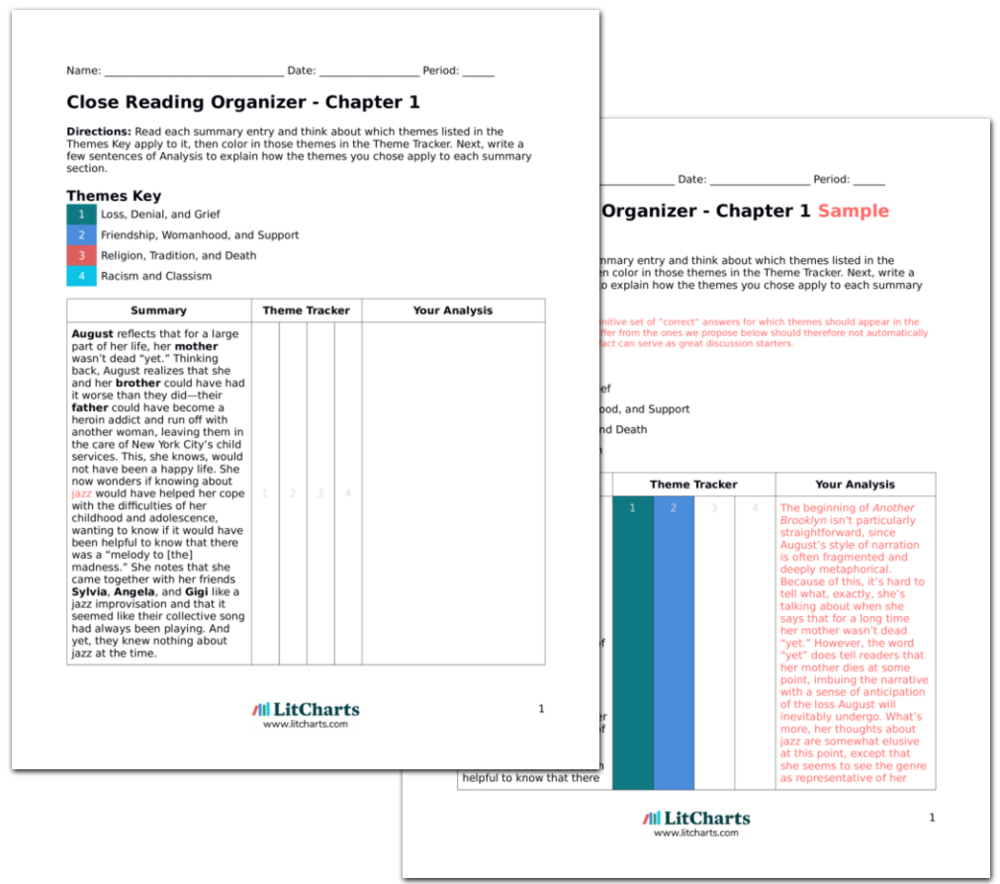