Get LitCharts A+
LitCharts assigns a color and icon to each theme in Anthem, which you can use to track the themes throughout the work.

Naturally, the flipside of Rand’s passionate advocacy of individualism is her vehement condemnation of collectivism, which is a broad term for any sociopolitical ideology that bases itself on the belief that all humans must depend on one another. In the foreword to Anthem, Rand writes that “the greatest guilt today is that of people who accept collectivism by moral default; the people who seek protection from the necessity of taking a stand, by refusing to admit to themselves the nature of that which they are accepting; the people who support plans specifically designed to achieve serfdom, but hide behind the empty assertion that they are lovers of freedom, with no concrete meaning attached to the word; the people who believe that the content of ideas need not be examined, that principles need not be defined, and that facts can be eliminated by keeping one's eyes shut.”

To demonstrate this point, the society that Equality 7-2521 is born into is a sinister caricature of collectivist ideals. Noble goals, like equality and fairness, are distorted into justifying ludicrously oppressive living conditions. Presumably to contribute to a collectivist ethos, no member of society can have a conventional name, and everyone is instead assigned a numbered platitude like “Freedom” or “Equality”—an indication of the words’ lack of “concrete meaning” that Rand criticizes in her foreword. Before going to bed, men chant, “we are nothing. Mankind is all.” In the name of fairness, citizens are arbitrarily assigned to jobs unrelated to their skill sets, rather than being allowed to pursue their passions. Equality 7-2521, who is intelligent and vigorous, has ambitions of being allowed to work as a Scholar. His hopes are dashed, however, when he is assigned the insulting job of Street Sweeper. Most egregiously of all, the leaders of this society dread the breakthrough invention that Equality 7-2521 devises, and try to destroy it. They claim that Equality 7-2521’s light bulb is “a great evil” because it might lighten men’s toil, and “men have no cause to exist save in toiling for other men.” Over time, it is also revealed that this collectivist society actually represents a dramatic regression from a more advanced and prosperous age of individualism that preceded it. Through these and other details, Rand posits that collectivism wastes individual ability and works to the detriment of mankind. 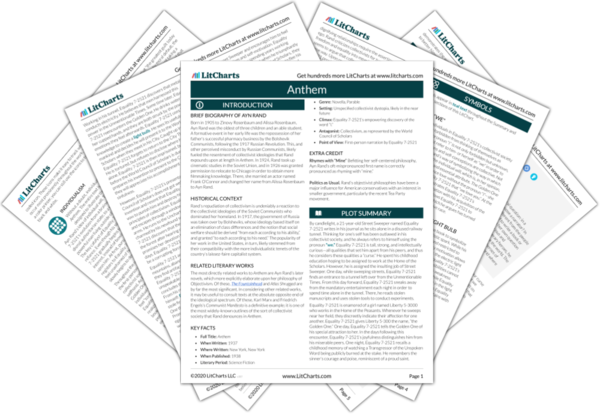 Below you will find the important quotes in Anthem related to the theme of Collectivism.
Chapter 1 Quotes

It is a sin to write this. It is a sin to think words no others think and to put them down upon a paper no others are to see. It is base and evil. It is as if we were speaking alone to no ears but our own. And we know well that there is no transgression blacker than to do or think alone. We have broken the laws. The laws say that men may not write unless the Council of Vocations bid them so. May we be forgiven!

We were born with a curse. It has always driven us to thoughts which are forbidden. It has always given us wishes which men may not wish. We know that we are evil, but there is no will in us and no power to resist it. This is our wonder and our secret fear, that we know and do not resist.

International 4-8818 and we are friends. This is an evil thing to say, for it is a transgression, the great Transgression of Preference, to love any among men better than the others, since we must love all men and all men are our friends. So International 4-8818 and we have never spoken of it. But we know. We know, when we look into each other's eyes. And when we look thus without words, we both know other things also, strange things for which there are no words, and these things frighten us.

And yet there is no shame in us and no regret. We say to ourselves that we are a wretch and a traitor. But we feel no burden upon our spirit and no fear in our heart. And it seems to us that our spirit is clear as a lake troubled by no eyes save those of the sun. And in our heart -- strange are the ways of evil! -- in our heart there is the first peace we have known in twenty years.

And as we look upon the Uncharted Forest far in the night, we think of the secrets of the Unmentionable Times. And we wonder how it came to pass that these secrets were lost to the world. We have heard the legends of the great fighting, in which many men fought on one side and only a few on the other. These few were the Evil Ones and they were conquered. Then great fires raged over the land. And in these fires the Evil Ones were burned. And the fire which is called the Dawn of the Great Rebirth, was the Script Fire where all the scripts of the Evil Ones were burned, and with them all the words of the Evil Ones. Great mountains of flame stood in the squares of the Cities for three months. Then came the Great Rebirth.

No single one can possess greater wisdom than the many Scholars who are elected by all men for their wisdom. Yet we can. We do. We have fought against saying it, but now it is said. We do not care. We forget all men, all laws and all things save our metals and our wires. So much is still to be learned! So long a road lies before us, and what care we if we must travel it alone!

Tomorrow, in the full light of day, we shall take our box, and leave our tunnel open, and walk through the streets to the Home of the Scholars. We shall put before them the greatest gift ever offered to men. We shall tell them the truth. We shall hand to them, as our confession, these pages we have written. We shall join our hands to theirs, and we shall work together, with the power of the sky, for the glory of mankind.

"A Street Sweeper! A Street Sweeper walking in upon the World Council of Scholars! It is not to be believed! It is against all the rules and all the laws!"

"What is not thought by all men cannot be true."

We have broken the law, but we have never doubted it. Yet now, as we walk through the forest, we are learning to doubt. 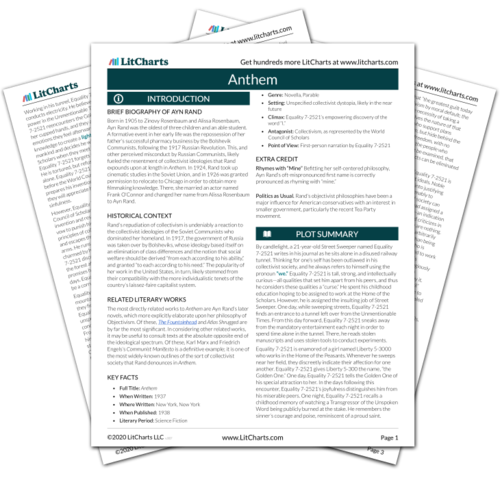 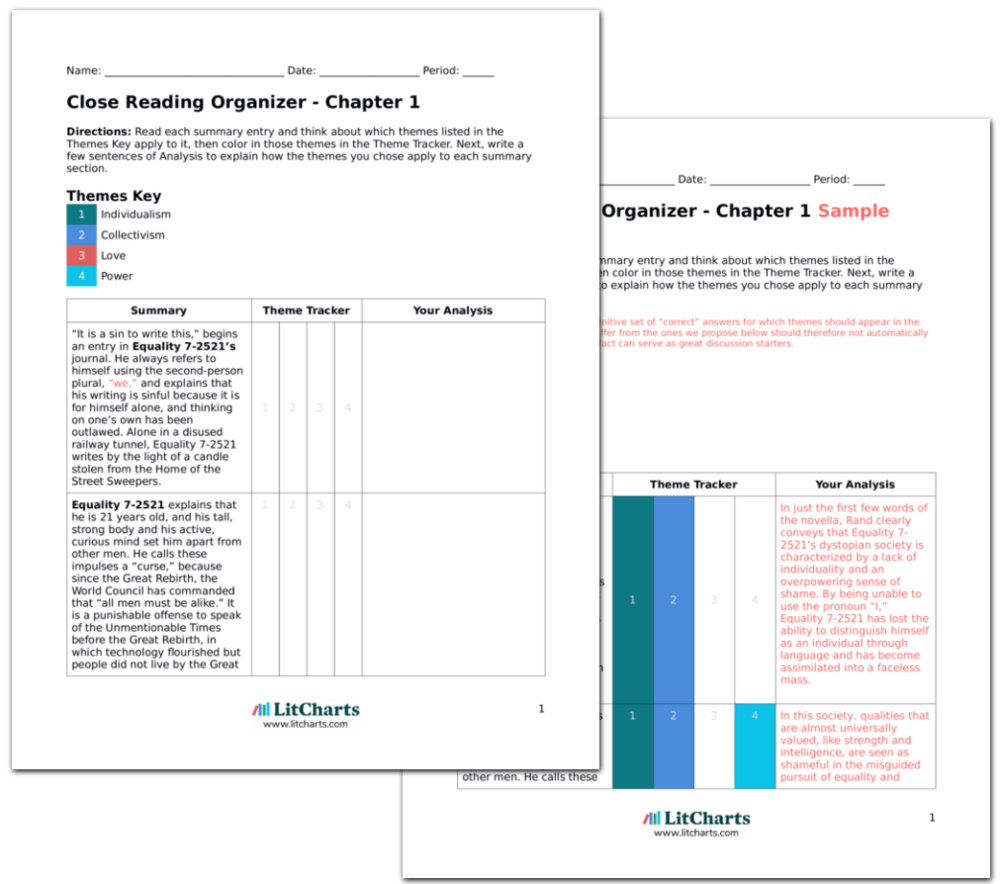