Plato’s Apology—a transliteration of the Ancient Greek word apologia, meaning “defense”—is supposedly a historical record of the speech Socrates gave to the Athenian jury after being accused of “corrupting the young and of not believing in the gods in whom the city believes.” Socrates begins his apologia by commenting on how his accusers have spoken about him. “I do not know, men of Athens, how my accusers affected you; as for me, I was almost carried away in spite of myself, so persuasively did they speak,” he begins. However, he notes, these accusers—who include Meletus and Anytus—have not spoken the truth. Indeed, Socrates insists that although his detractors have warned the jury about his cunning rhetorical trickery, he is not an accomplished orator. In fact, he asks the jury to excuse his manner of speaking, since he is seventy years old and has never appeared in court. As such, he says, he has decided to speak as he normally does, using simple, straightforward language.

Socrates says many people have spoken ill of him over the years, and so he decides to address their accusations first. He fears this slander more than he fears what Meletus and Anytus have said about him, since his unknown accusers have been working for a long time to “persuade” the people of Athens to distrust him. “They spoke to you at an age when you would most readily believe them, some of you being children and adolescents, and they won their case by default, as there was no defense,” Socrates says. Nevertheless, he says he will defend himself against these slanderous remarks, beginning by refuting the idea that he has “busie[d] himself studying things in the sky and below the earth” and spreading these problematic ideas throughout Athens.

To this end, he makes it clear that he is not a Sophist (intellectuals in ancient Greece who taught philosophy to the sons of rich men in exchange for large amounts of money). Unlike the Sophists, Socrates has never accepted money for his teachings, for he believes he doesn’t possess the “knowledge” necessary to do such a thing. To that end, he upholds that he merely has “human wisdom.” He then says that his friend, Chaerephon, traveled to Delphi and asked the oracle if there is anyone wiser than Socrates, and the oracle told him there isn’t. When Socrates himself heard this, he explains, he was deeply confused, since he understands that he is not truly wise.

Wanting to test the Delphic oracle’s assertion, Socrates visited a man he considered wiser than himself. After speaking to him, though, he realized the man was not as knowledgeable as he believed. “I thought that he appeared wise to many people and especially to himself, but he was not,” Socrates says, explaining that he then decided to help this man understand his own ignorance. Unsurprisingly, this upset the man, as well as a handful of bystanders who were listening to the conversation. As Socrates walked away, he thought to himself, “I am wiser than this man; it is likely that neither of us knows anything worthwhile, but he thinks he knows something when he does not, whereas when I do not know, neither do I think I know; so I am likely to be wiser than he to this small extent, that I do not think I know what I do not know.”

Still addressing the jury, Socrates tells his listeners that he decided to visit other supposedly wise men, hoping to find someone truly knowledgeable. Going to the city’s most well-respected poets, though, Socrates was disappointed to discover that they, too, were not truly wise, though they thought highly of themselves and believed wholeheartedly in their own intelligence. At this point, Socrates visited the city’s craftsmen. “They knew things I did not know,” he says, “and to that extent they were wiser than I. But, men of Athens, the good craftsmen seemed to me to have the same fault as the poets: each of them, because of his success at his craft, thought himself very wise in other most important pursuits, and this error of theirs overshadowed the wisdom they had, so that I asked myself, on behalf of the oracle, whether I should prefer to be as I am, with neither their wisdom nor their ignorance, or to have both. The answer I gave myself and the oracle was that it was to my advantage to be as I am.”

Since then, Socrates says, he has been working to spread the Delphic oracle’s message that human wisdom is “worthless.” To do this, he has continued to travel throughout Athens and unveil the ignorance of men who are supposedly wise. In doing so, though, he has gained an unfavorable reputation, one that frames him as impious and philosophically contrarian, though he’s only working in service of the Delphic oracle (and, thus, the god Apollo). This, he upholds, is why he has been accused of “corrupting the young.”

Having addressed these accusations made by unnamed detractors, Socrates turns his attention to the claims made by Meletus and Anytus—namely, that he is “guilty of corrupting the young and of not believing in the gods in whom the city believes, but in other new spiritual things.” Speaking directly to Meletus, he begins to question the man about the specifics of these accusations, asking if he can name anyone in particular who “improve[s]” the youth of Athens. In response, Meletus says that everyone—the jury, the assembly, etc.—improves the youth; everyone, that is, except Socrates. As such, he states that Socrates “alone corrupt[s] them.” To this Socrates says, “Tell me: does this also apply to horses, do you think? Or is quite the contrary true, one individual is able to improve them, or very few, namely, the horse breeders, whereas the majority, if they have horses and use them, corrupt them? Is that not the case, Meletus, both with horses and all other animals?” Going on, he says that if he himself “make[s] one of [his] associates wicked,” he himself “run[s] the risk of being harmed by him.” As such, he posits that if he does “corrupt the young,” he must do so unwillingly. And if this is the case, then it follows that Meletus should not be punishing him but rather teaching him to improve.

Focusing now on Meletus’s claim that he does not believe in gods, Socrates again questions him about the nature of his accusations. Although Meletus says Socrates doesn’t believe in gods at all, he concedes that he thinks Socrates believes in and teaches “spiritual things.” This, Socrates points out, is a contradiction, since Meletus eventually admits that spirits are “either gods or the children of gods.” As such, if Socrates believes in “spiritual things,” then he must also believe in gods. In this way, Socrates shows the jury that Meletus is accusing him of not believing in gods while simultaneously asserting that he does believe in gods. Having unearthed these inconsistencies, Socrates suggests that his accusers don’t actually care about corruption and piety. Rather, they simply want to slander him.

Next, Socrates considers the fact that he might be sentenced to death. This, he asserts, doesn’t bother him, since he doesn’t know what death is like. Assuming death is a bad thing would be a presumption of wisdom, he says. “To fear death, gentlemen, is no other than to think oneself wise when one is not, to think one knows what one does not know,” he upholds. As a result, he’d rather maintain his values and face the possibility of death. If the jury acquits him, he says, he will continue to behave as he always has, even if they ask him to refrain from speaking about wisdom and belief. “I think there is no greater blessing for the city than my service to god,” he says, adding that he’s delivering this defense not for his own sake, but for the jury members themselves—since he knows that if they execute him, they’ll be acting immorally.

Before finishing his initial defense, Socrates informs the jury that he will not beg for innocence, nor will he call upon witnesses to testify on his behalf. This, he explains, is because he respects the judicial system too much to demean it with such hysterics.

The jury convenes and concludes that Socrates is guilty, and Meletus “asks for the penalty of death.” At this point, Socrates is allowed to address the jury to advocate for whatever punishment he thinks he deserves. However, he remains unfazed by the guilty verdict, pointing out that it was a very narrow vote. He then says that, since he has done nothing but help his fellow Athenians by acting on behalf of the Delphic oracle, he believes he should be rewarded. At the same time, though, he knows the jury will disagree with this, so he suggests that he should have to pay a fine, since money means nothing to him anyway. However, he has dedicated his life to spreading knowledge free of charge, meaning that he lives in poverty. As such, he says that his friends, Crito, Critobulus, and Apollodorus, have agreed to pay a fine of thirty minas on his behalf.

After another vote, the jury sentences Socrates to death. Socrates says they will soon regret their decision, since people who want to “denigrate” Athens will surely condemn the city for killing a wise man. However, he says he has no qualms about how he has defended himself, asserting that he was convicted because he refused to tell the jury what they wanted to hear or to debase himself through “lamentations and tears.” Emphasizing the fact that he has only tried to help his fellow Athenians remain moral, he asks his listeners to make sure they hold his sons accountable if they ever become greedy or foolish. “Reproach them as I reproach you,” he says. “If you do this, I shall have been justly treated by you, and my sons also.”

Having said all this, Socrates acknowledges that the hour of his death has come. “I go to die, you go to live,” he says. “Which of us goes to the better lot is known to no one, except the god.” 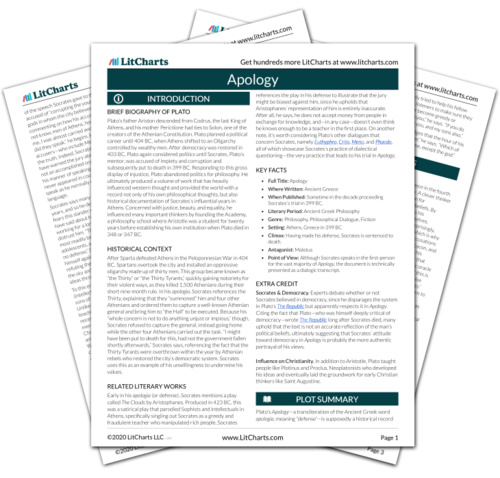 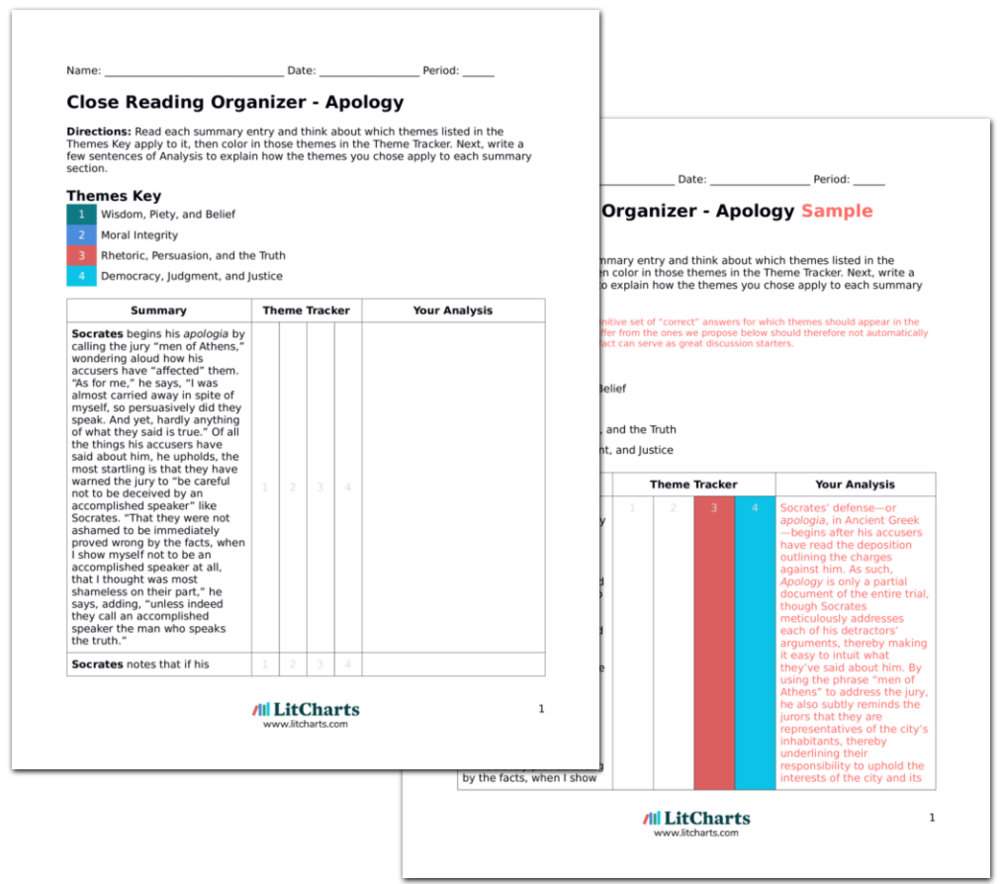