Welcome to the LitCharts study guide on John Milton's Areopagitica. Created by the original team behind SparkNotes, LitCharts are the world's best literature guides.

A concise biography of John Milton plus historical and literary context for Areopagitica.

A quick-reference summary: Areopagitica on a single page.

In-depth summary and analysis of every of Areopagitica. Visual theme-tracking, too.

Explanations of Areopagitica's symbols, and tracking of where they appear.

An interactive data visualization of Areopagitica's plot and themes.

Milton was born in Cheapside, London, to John Milton, a respected musical composer, and Sarah Jeffrey. Milton’s father made a handsome living as a scrivener in London’s financial district, and his wealth afforded young Milton a private tutor. Milton later attended St. Paul’s School in London, where he studied Latin and Greek and began writing, mostly psalms and other types of religious poetry. He attended university at Christ’s College, Cambridge, and graduated in 1629 with a B.A. Milton continued studying at Cambridge, and in 1632, he graduated fourth in his class with a Master of Arts degree. He spent the next six years engrossed in private study at his father’s home in London, during which time he wrote and anonymously published Comus, a masque, or type of play popular in the 17th century. In 1638, Milton wrote his famous poem, “Lycidas,” which was immediately embraced as one of the greatest poems ever written. That same year, Milton embarked on a tour of France and Italy, which he references in Areopagitica. In 1642, Milton married Mary Powell, a 17-year-old girl several years his junior, and they suffered through a strained and distant marriage. Together, Milton and Mary had two daughters and one son, who died in infancy, before Mary died herself after giving birth to their third daughter in 1652. It was during Milton’s tumultuous marriage to Mary that he wrote the polemic, The Doctrine of Discipline of Divorce, in 1643. Milton was miserable in his marriage, and he was certain that God did not mean for him to stay that way. His controversial views on marriage and divorce meant much of his writing was censored by Parliament, and he struck back against censorship in 1644 with the writing of Areopagitica. The pamphlet circulated for about one month before it nearly disappeared altogether. Milton failed to persuade Parliament to stop the pre-publication licensing of books in his lifetime, and it was several years before Areopagitica was fully appreciated as a foundational piece of writing on the freedom of written speech. Milton married his second wife, Katherine Woodcock, in 1656, but she and his infant daughter died in childbirth. Around the year 1658, Milton began writing his epic poem, Paradise Lost, by which time he had gone almost completely blind. Milton had to dictate Paradise Lost in its entirety, most likely through his daughter, Mary. In 1663, Milton married his third wife, Elizabeth Mynshull, and finished writing Paradise Lost in 1664. The poem was published in 10 volumes in 1667 and was immediately controversial; however, it remains one of the most important pieces of English literature to date. Milton published the sequel to Paradise Lost, Paradise Regained, in 1671. He died in London in 1674 at 65, of what is thought to have been kidney failure and complications of gout.
Get the entire Areopagitica LitChart as a printable PDF.
"My students can't get enough of your charts and their results have gone through the roof." -Graham S.
Download it! 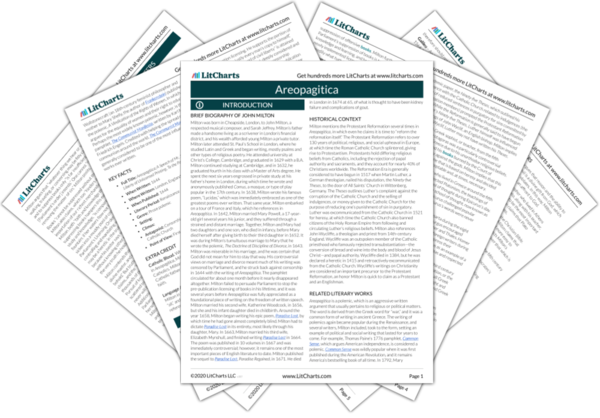 Milton mentions the Protestant Reformation several times in Areopagitica, in which even he claims it is time to “reform the reformation itself.” The Protestant Reformation refers to over 130 years of political, religious, and social upheaval in Europe, at which time the Roman Catholic Church splintered, giving rise to Protestantism. Protestants hold differing religious beliefs from Catholics, including the rejection of papal authority and sacraments, and they account for nearly 40% of Christians worldwide. The Reformation Era is generally considered to have begun in 1517 when Martin Luther, a German theologian, nailed his disputation, the Ninety-five Theses, to the door of All Saints’ Church in Wittenberg, Germany. The Theses outlines Luther’s complaint against the corruption of the Catholic Church and the selling of indulgences, or money given to the Catholic Church for the purpose of reducing one’s punishment of sin in purgatory. Luther was excommunicated from the Catholic Church in 1521 for heresy, at which time the Catholic Church also banned citizens of the Holy Roman Empire from following and circulating Luther’s religious beliefs. Milton also references John Wycliffe, a theologian and priest from 14th-century England. Wycliffe was an outspoken member of the Catholic priesthood who famously rejected transubstantiation—the conversion of bread and wine into the body and blood of Jesus Christ—and papal authority. Wycliffe died in 1384, but he was declared a heretic in 1415 and retroactively excommunicated from the Catholic Church. Wycliffe’s writings on Christianity are considered an important precursor to the Protestant Reformation, an honor Milton is quick to claim as a Protestant and an Englishman.

Other Books Related to Areopagitica

Areopagitica is a polemic, which is an aggressive written argument that usually pertains to religious or political matters. The word is derived from the Greek word for “war,” and it was a common form of writing in ancient Greece. The writing of polemics again became popular during the Renaissance, and several writers, Milton included, took to the form, setting an example of political and social writing that lasted for years to come. For example, Thomas Paine’s 1776 pamphlet, Common Sense, which argues American independence, is considered a polemic. Common Sense was wildly popular when it was first published during the American Revolution, and it remains America’s bestselling book of all time. In 1792, Mary Wollstonecraft (an 18th-century feminist philosopher and mother to Mary Shelly, the author of Frankenstein) published the polemic, A Vindication of the Rights of Women, in which she argues for the equality of women and their right to education. Perhaps the most widely known polemic, however, is the 1848 pamphlet, The Communist Manifesto, written by Karl Marx and Friedrich Engels. Credited with helping the spread of communism around the world, The Communist Manifesto is generally considered to be one of the most influential political works ever written.
Key Facts about Areopagitica

Catholic Blood. While Milton’s distaste for Catholicism is clear in Areopagitica, Milton himself comes from a long line of Catholics. Milton’s father was disowned by his own devout Catholic father, Richard Milton, for following the Protestant faith.

Language Arts. The word “pandemonium” is one coined by Milton in the 1660s. It is derived from the Greek pan, meaning “all,” and the Latin daemonium, for “evil spirit.” The word references Pandaemonium, the capital of Hell in Paradise Lost. 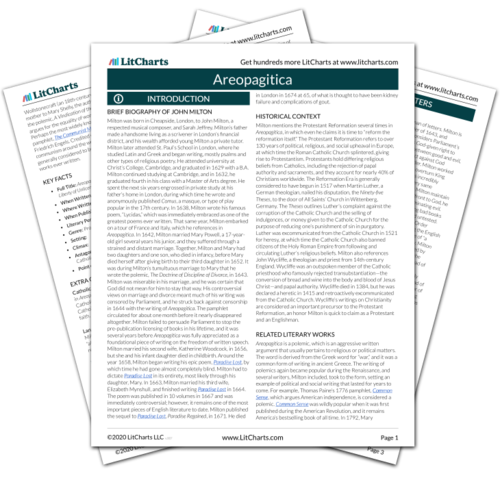