Download this LitChart! (PDF)
Teachers and parents! Struggling with distance learning? Our Teacher Edition on Ashes can help.

Welcome to the LitCharts study guide on Cate Kennedy's Ashes. Created by the original team behind SparkNotes, LitCharts are the world's best literature guides.

A concise biography of Cate Kennedy plus historical and literary context for Ashes.

A quick-reference summary: Ashes on a single page.

In-depth summary and analysis of every of Ashes. Visual theme-tracking, too.

Explanations of Ashes's symbols, and tracking of where they appear.

An interactive data visualization of Ashes's plot and themes.

Kennedy was born in the United Kingdom and spent her childhood traveling between various Australian states and the UK, due to her father’s career in the Air Force. After studying at the Canberra College of Advanced Education (which later became the University of Canberra) and the Australian National University, she worked as a freelance writer, a teacher, and a community arts worker. In the 1990s, she spent two years as a volunteer teaching reading and writing in Central Mexico. This experience partially inspired her first poetry collection, Signs of Other Fires, published in 2001. Kennedy has since published several other volumes of poetry, one novel, and two short story collections, Dark Roots and Like a House on Fire. Many of her stories were first published individually in magazines and newspapers. Her short story and poetry collections have won numerous awards, including the 2013 Steele Rudd Award and the 2013 Stella Prize, both for Like a House on Fire. Kennedy lives in Victoria, Australia.
Get the entire Ashes LitChart as a printable PDF.
"My students can't get enough of your charts and their results have gone through the roof." -Graham S.
Download 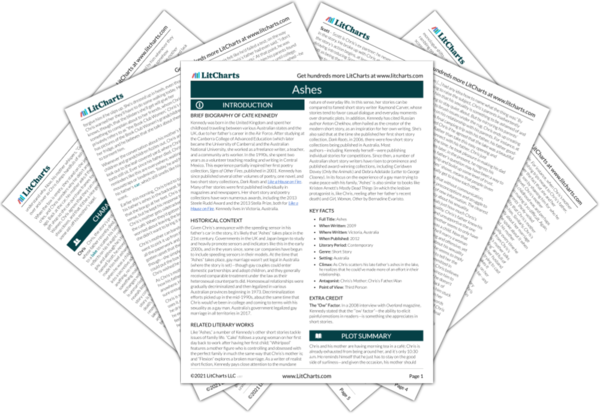 Given Chris’s annoyance with the speeding sensor in his father’s car in the story, it’s likely that “Ashes” takes place in the 21st century. Governments in the UK and Japan began to study and heavily promote sensors and indicators like this in the early 2000s, and in the years since, some car companies have begun to include speeding sensors in their models. At the time that “Ashes” takes place, gay marriage wasn’t yet legal in Australia (where the story is set)—though gay couples could enter domestic partnerships and adopt children, and they generally received comparable treatment under the law as their heterosexual counterparts did. Homosexual relationships were gradually decriminalized and then legalized in various Australian provinces beginning in 1973. Decriminalization efforts picked up in the mid-1990s, about the same time that Chris would’ve been in college and coming to terms with his sexuality as a gay man. Australia’s government legalized gay marriage in all territories in 2017.

Other Books Related to Ashes

Like “Ashes,” a number of Kennedy’s other short stories tackle issues of family life. “Cake” follows a young woman on her first day back to work after having her first child; “Whirlpool” features a mother figure who is controlling and obsessed with the perfect family in much the same way that Chris’s mother is; and “Flexion” explores a broken marriage. As a writer of realist short fiction, Kennedy pays close attention to the mundane nature of everyday life. In this sense, her stories can be compared to famed short story writer Raymond Carver, whose stories tend to favor casual dialogue and everyday moments over dramatic plots. In addition, Kennedy has cited Russian author Anton Chekhov, often hailed as the creator of the modern short story, as an inspiration for her own writing. She’s also said that at the time she published her first short story collection, Dark Roots, in 2006, there were few short story collections being published in Australia. Most authors—including Kennedy herself—were publishing individual stories for competitions. Since then, a number of Australian short story writers have risen to prominence and published award-winning collections, including Ceridwen Dovey (Only the Animals) and Debra Adelaide (Letter to George Clooney). In its focus on the experience of a gay man trying to make peace with his family, “Ashes” is also similar to books like Kristen Arnett’s Mostly Dead Things (in which the lesbian protagonist is, like Chris, reeling after her father’s recent death) and Girl, Woman, Other by Bernadine Evaristo.
Key Facts about Ashes

The “Ow” Factor. In a 2008 interview with Overland magazine, Kennedy stated that the “’ow’ factor”—the ability to elicit painful emotions in readers—is something she appreciates in short stories. 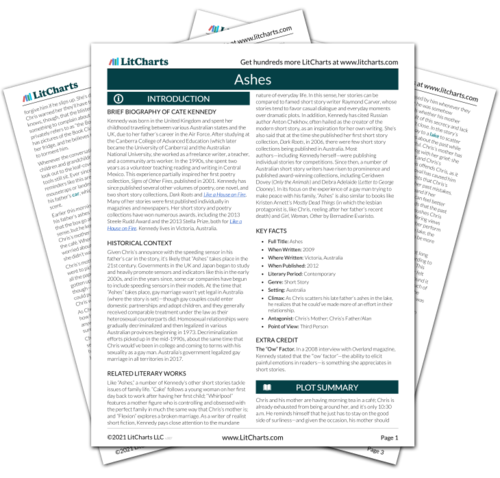 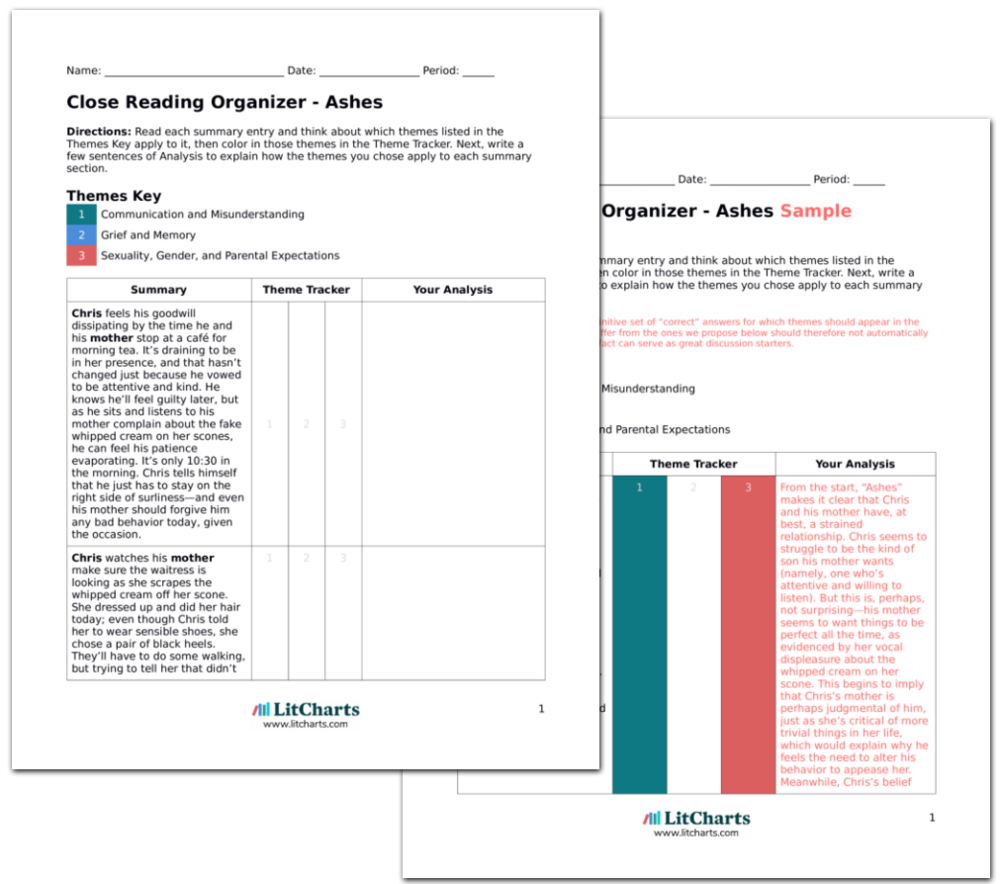