Welcome to the LitCharts study guide on James Weldon Johnson's Autobiography of an Ex-Colored Man. Created by the original team behind SparkNotes, LitCharts are the world's best literature guides.

Autobiography of an Ex-Colored Man: Introduction

A concise biography of James Weldon Johnson plus historical and literary context for Autobiography of an Ex-Colored Man.

A quick-reference summary: Autobiography of an Ex-Colored Man on a single page.

In-depth summary and analysis of every chapter of Autobiography of an Ex-Colored Man. Visual theme-tracking, too.

Autobiography of an Ex-Colored Man: Themes

Explanations, analysis, and visualizations of Autobiography of an Ex-Colored Man's themes.

Autobiography of an Ex-Colored Man: Quotes

Autobiography of an Ex-Colored Man's important quotes, sortable by theme, character, or chapter.

Autobiography of an Ex-Colored Man: Characters

Description, analysis, and timelines for Autobiography of an Ex-Colored Man's characters.

Description, analysis, and timelines for Autobiography of an Ex-Colored Man's terms.

Autobiography of an Ex-Colored Man: Symbols

Explanations of Autobiography of an Ex-Colored Man's symbols, and tracking of where they appear.

An interactive data visualization of Autobiography of an Ex-Colored Man's plot and themes.

Although The Autobiography of an Ex-Colored Man was in no way a genuine autobiography of the author’s life, he did pull numerous events in the book from his personal experiences in Jacksonville and New York, the music industry, and early civil rights activism. James Weldon Johnson was born to middle-class Bahamian parents in Jacksonville, Florida, where his father was the headwaiter at the St. James Hotel. He studied English literature and classical music at Atlanta University, graduating in 1894, before returning to Jacksonville and founding the nation’s first daily black newspaper, The Daily American, in 1895. He soon took an interest in law and became one of the first African-Americans to pass the Florida Bar Examination, but he never worked as a lawyer; instead, he became the principal of the all-black Stanton College Preparatory School, which is still widely considered one of the best high schools in the United States. With his conservatory-trained brother Rosamond, Johnson moved to New York in 1902. The brothers found immense success working with producer Bob Cole to sell their compositions to Broadway directors. He worked on Theodore Roosevelt’s 1904 presidential campaign, which led to a job as the first black United States consul in Venezuela (from 1906-1908) and then Nicaragua (from 1908-1913). He wrote The Autobiography of an Ex-Colored Man during this time and married activist Grace Nail Johnson in 1910. After leaving his post in Nicaragua, they moved to Harlem, where they became leading voices in the Harlem Renaissance. Still sometimes called the “elder statesman” of the movement, Johnson famously mentored some of its most prominent figures, like Langston Hughes, Jean Toomer, Sterling Brown, and Anne Spencer. From 1920 to 1930, Johnson was the first black head of the National Association for the Advancement of Colored People, the role for which he is probably best remembered. He oversaw dramatic growth in the organization’s membership, from roughly 9,000 to 90,000 members by the end of his tenure, and particularly emphasized the fight against Southern lynching, lobbying aggressively to get the Dyer Anti-Lynching Bill passed in Congress. In fact, in 1901, he was once nearly lynched himself in Jacksonville, which no doubt influenced his decision to leave for New York. He spent the last eight years of his life teaching creative writing and literature at the historically black Fisk University in Nashville, and in 1938 he died in a car accident on vacation in Maine. His wife, who was driving at the time of this accident, suffered serious injuries but survived, and ultimately outlived her husband by nearly four decades.
Get the entire Autobiography of an Ex-Colored Man LitChart as a printable PDF.
"My students can't get enough of your charts and their results have gone through the roof." -Graham S.
Download 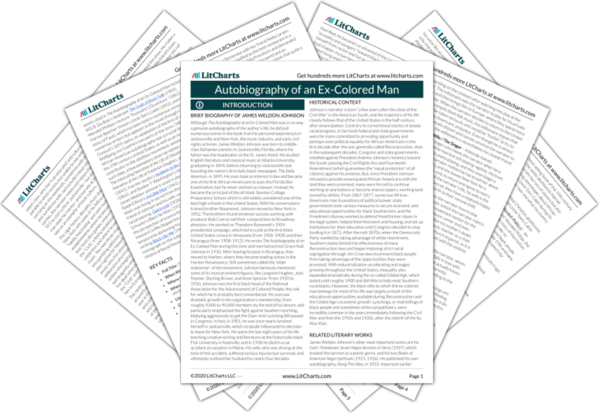 Historical Context of Autobiography of an Ex-Colored Man

Johnson’s narrator is born “a few years after the close of the Civil War” in the American South, and the trajectory of his life closely follows that of the United States in the half-century after emancipation. Contrary to conventional stories of steady racial progress, in fact both federal and state governments were far more committed to providing opportunity and perhaps even political equality for African-Americans in the first decade after the war, generally called Reconstruction, than in the subsequent decades. Congress and state governments rebelled against President Andrew Johnson’s leniency toward the South, passing the Civil Rights Act and Fourteenth Amendment (which guarantees the “equal protection” of all citizens) against his protests. But, since President Johnson refused to provide emancipated African-Americans with the land they were promised, many were forced to continue working on plantations or become sharecroppers, working land owned by whites. From 1867-1877, numerous African-Americans rose to positions of political power, state governments took various measures to secure economic and educational opportunities for black Southerners, and the Freedmen’s Bureau worked to defend freed former slaves in the legal system, helped them find work and housing, and set up institutions for their education until Congress decided to stop funding it in 1872. After the mid-1870s, when the Democratic Party swelled by taking advantage of white resentment, Southern states limited the effectiveness of many Reconstruction laws and began imposing strict racial segregation through Jim Crow laws to prevent black people from taking advantage of the opportunities they were promised. With industrialization accelerating and wages growing throughout the United States, inequality also expanded dramatically during the so-called Gilded Age, which lasted until roughly 1900 and did little to help most Southern rural blacks. However, the black elite to which the ex-colored man belongs for most of his life was largely a result of the educational opportunities available during Reconstruction and the Gilded Age’s economic growth. Lynchings, or mob killings of black people and sometimes white sympathizers, were incredibly common in the years immediately following the Civil War and then the 1910s and 1920s, after the rebirth of the Ku Klux Klan.

Other Books Related to Autobiography of an Ex-Colored Man

James Weldon Johnson’s other most important works are his God's Trombones: Seven Negro Sermons in Verse (1927), which treated the sermon as a poetic genre, and his two Books of American Negro Spirituals (1925, 1926). He published his own autobiography, Along This Way, in 1933. Important earlier works cited in The Autobiography of an Ex-Colored Man include W.E.B. Du Bois’s landmark The Souls of Black Folk (1903), Wendell Phillips’s lecture “Toussaint L’Ouverture” (1861), Harriet Beecher Stowe’s Uncle Tom’s Cabin (1852), and the story of Faust, which has been told in numerous versions by numerous writers but appears in the novel through Charles Gonoud’s 1859 opera, an adaptation of the first of Johann Wolfgang von Goethe’s two parts of the story (1808). The African-American autobiography was a crucial literary genre in the 19th century United States, as well as an important contributor to the abolition movement; among the hundreds of such titles, a few exemplary slave narratives are the early text The Interesting Narrative of the Life of Olaudah Equiano (1789), Narrative of the Life of Frederick Douglass, an American Slave (1845), Harriet Jacobs’s Incidents in the Life of a Slave Girl (1861), and Booker T. Washington’s Up from Slavery (1901). James Weldon Johnson’s novel is also frequently compared to Ralph Ellison’s Invisible Man (1961), also narrated by a nameless black man living in secret from the world. Nella Larsen, a close friend of Johnson and his wife, was noted for her novels about racial passing: Quicksand (1928) and Passing (1929). George Schuyler’s Black No More (1931) treats the same theme from the perspective of science fiction, and white journalist John Howard Griffin flipped the conventional script of passing by temporarily darkening his skin, traveling through the South, and writing Black Like Me (1961). The most prominent scholarly monograph on the subject is Allyson Hobbs’s A Chosen Exile: A History of Racial Passing in American Life (2014).
Key Facts about Autobiography of an Ex-Colored Man

Extra Credit for Autobiography of an Ex-Colored Man

“Passing” in Tennessee. Although James Weldon Johnson could never pass as white, his wife Grace Nail Johnson once did, on a trip to rural Tennessee with her friend Nella Larsen, who later wrote that they “walked to the best restaurant in a rather conservative town called Murfreesboro and demanded lunch and got it, plus all the service in the world and an invitation to return. Everybody here seems to think that quite a stunt.”

Black National Anthem. James Weldon Johnson and his brother Rosamond wrote the song “Lift Every Voice and Sing” for a 1900 memorial service for Abraham Lincoln. The immensely popular song has since become a staple in black politics and come to be known as the “Black National Anthem.”