Luo and the narrator arrive at the mountain Phoenix of the Sky, a dizzyingly tall and extremely rural mountain near the Chinese border with Tibet. The village headman wants to burn the narrator's violin, but Luo explains to the headman that the narrator is a talented violinist and will play a sonata titled "Mozart is Thinking of Chairman Mao." The headman allows the narrator to keep the violin.

The narrator explains that he and Luo are considered intellectuals by the government and, because of this, they have been sent to the mountain to undergo re-education by the poor peasants. The boys perform backbreaking work and carry buckets of feces to the fields every day. The mountain is rainy and depressing, and the narrator plays his violin to try to lift his and Luo's spirits. He explains to the reader that because of his musical talent he may someday get to leave the mountain, but Luo's only talent is storytelling. The headman is the only one who appreciates Luo's talent, and he sends Luo and the narrator to the town of Yong Jing to see movies and then relate them back to the village.

The narrator and Luo are sent to work in the extremely dangerous coal mine for two months. After six weeks, Luo contracts malaria. The miners whip Luo to drive out the infection, and when they instruct the narrator to take over, the narrator discovers a letter from the Little Seamstress, saying that she's arranged for them to come to her village and perform an "oral cinema show." When they arrive and the Little Seamstress sees how ill Luo is, she cancels the show, tucks Luo into her bed, and applies a poultice to his arm. She calls four sorceresses to keep a vigil around Luo. When the sorceresses begin to fall asleep, the Little Seamstress asks the narrator to tell them a story to keep them awake. Luo regains consciousness partway through the narrator's poor recitation and speaks the final heart-wrenching line of the story, sending the sorceresses into tears.

The next morning, Luo feels well enough to head home. He and the narrator stop when they see their friend Four-Eyes struggling with a water buffalo in a muddy field. Four-Eyes suggests that his friends rest at his house. When the narrator is searching for a sweater for Luo under Four-Eyes' bed, he finds a small, heavy suitcase. Four-Eyes won't say anything about it, but he looks panicked when Luo suggests that it contains books.

One snowy day in spring, Luo and the narrator go to see Four-Eyes, who has recently lost his glasses but is still attempting to work. Luo offers to help Four-Eyes finish his work in exchange for a book. Four-Eyes refuses, but is unable to complete his task. Luo and the narrator help him, and he gives them Ursule Mirouët by Balzac. Luo stays up all night reading and leaves in the morning after giving the book to the narrator. The narrator reads all day and when he's done, he copies a passage from the novel onto the inside of his jacket. Luo returns early the next morning and tells the narrator that he and the Little Seamstress had sex for the first time.

Luo and the narrator return the novel to Four-Eyes, but he won't lend them any more books. One day, they find Four-Eyes boiling his clothes, and he tells his friends that he had the opportunity to get off the mountain by collecting folk songs from an old miller. He ruined the opportunity by offending the old man and got lice in the process. Four-Eyes promises the boys a book if they can successfully record the miller's songs. Luo and the narrator disguise themselves as soldiers and visit the miller. They join him in sucking on salty rocks, and the miller sings bawdy songs. When they present their work to Four-Eyes, Four-Eyes deems the songs "smutty rhymes." He decides to alter them, and the narrator punches Four-Eyes.

Luo and the narrator fashion a master key to pick Four-Eyes' lock and plan to steal the books during the village's celebratory banquet. Four-Eyes' village's headman slaughters a buffalo, and he and Four-Eyes drink the animal's blood. Later, Luo and the narrator watch the festivities before breaking into Four-Eyes' house. They find the suitcase, which is full of translated Western novels. When they try to leave through the window they find it locked. They hear Four-Eyes and the poetess returning to the house and hide under the beds. When Four-Eyes and his mother leave, Luo grabs the suitcase and they run away with it.

Four-Eyes never reports his missing books. The headman leaves for a party conference, and Luo and the narrator spend a month reading all the books in the suitcase. The narrator is most taken by the novel Jean-Christophe. Luo spends his days visiting the Little Seamstress and reading to her. When a storm ravages the mountain, it creates a dangerous path along the way that scares even the narrator, who isn't afraid of heights like Luo is.

When the headman returns, he's very angry because he received poor dental care in Yong Jing. He asks Luo to repair his bad tooth, since his father is a dentist, but Luo refuses. The tailor arrives in the village a few days later and decides to stay with Luo and the narrator. Before they go to bed the first night, the tailor asks the boys to tell him a story. The narrator begins to tell The Count of Monte Cristo, and the tailor is hooked. The telling takes nine nights. On the third, the narrator is interrupted by the headman, who accuses him of spreading reactionary trash. The headman threatens to take the narrator to the Public Security Office, but says that he'll leave the narrator alone if Luo can repair the headman's tooth. The tailor fashions a drill out of his sewing machine needle. The headman can't stand the pain of the makeshift drill, so Luo suggests they tie the headman down. The headman agrees, and the narrator works the treadle. He takes revenge on the headman by making the treadle go as slowly as possible.

The novel switches to passages of narration by other characters. The old miller narrates a story of coming upon Luo and the Little Seamstress having sex in a secluded pool. Then Luo narrates, saying he taught the Little Seamstress how to dive, and how she loved to dive for his key ring. He says that he has to leave for a month to sit at his mother's sickbed. The Little Seamstress takes over the narration and tells the narrator that Luo's stories made her want to dive. On the last day she and Luo went to the pool, they acted out a part of The Count of Monte Cristo, and then she dove for Luo's keys. At the bottom of the pool she encountered a snake that bit her, and she left Luo's keys underwater. 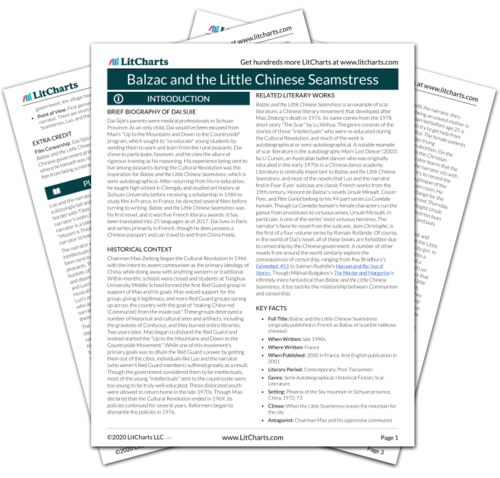 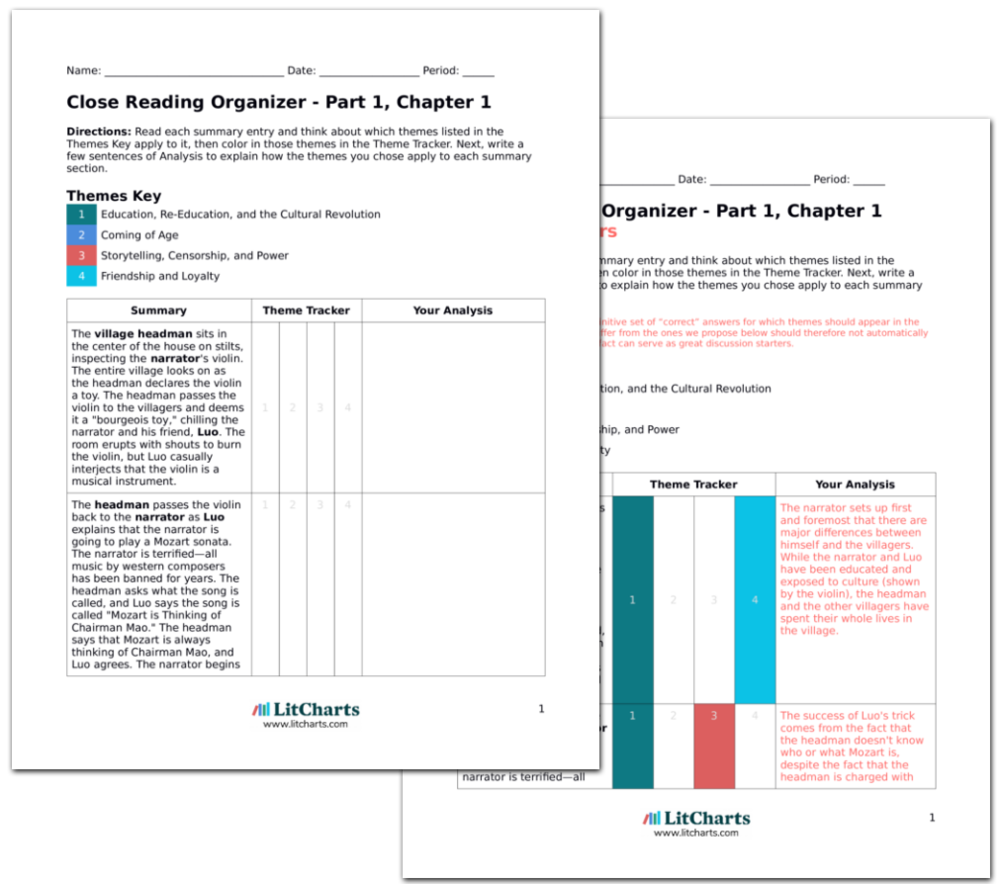