Download this LitChart! (PDF)
Teachers and parents! Struggling with distance learning? Our Teacher Edition on Becoming can help.

Welcome to the LitCharts study guide on Michelle Obama's Becoming. Created by the original team behind SparkNotes, LitCharts are the world's best literature guides.

A concise biography of Michelle Obama plus historical and literary context for Becoming.

A quick-reference summary: Becoming on a single page.

In-depth summary and analysis of every chapter of Becoming. Visual theme-tracking, too.

Explanations of Becoming's symbols, and tracking of where they appear.

An interactive data visualization of Becoming's plot and themes.

Michelle Obama was born and raised on the South Side of Chicago by her mother and father, along with her older brother Craig. She went on to attend college at Princeton University, where she majored in sociology. After college, she attended Harvard Law School and, after graduating, got a job at a corporate law firm in Chicago called Sidley & Austin. At Sidley, she was assigned to mentor a summer associate, Barack Obama, who worked for Sidley between his first and second years at Harvard Law. The two quickly began dating and married after Barack graduated from law school. Michelle then quit her job at Sidley, looking for something more fulfilling, and had a string of jobs working with the South Side community—first at City Hall, then at an organization called Public Allies, and then at the University of Chicago Medical Center. Michelle and Barack had two daughters, Malia and Sasha, in 1998 and 2001. Barack quickly became involved in politics, rising from Illinois State Senator to United States Senator, and then becoming the forty-fourth president of the United States. Barack was president from 2008 to 2016, and Michelle and her family moved to the White House with him. During her time as First Lady, Michelle worked on initiatives called Let’s Move! (a children’s health initiative), Joining Forces (which focuses on supporting military families), and Let Girls Learn (supporting girls’ education worldwide), and a new White House garden. Michelle and her family currently live in Washington, D.C.
Get the entire Becoming LitChart as a printable PDF.
"My students can't get enough of your charts and their results have gone through the roof." -Graham S.
Download 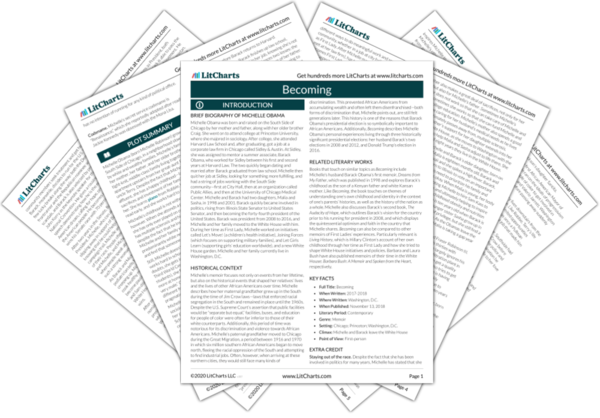 Michelle’s memoir focuses not only on events from her lifetime, but also on the historical events that shaped her relatives’ lives and the lives of other African Americans over time. Michelle describes how her maternal grandfather grew up in the South during the time of Jim Crow laws—laws that enforced racial segregation in the South and remained in place until the 1960s. Despite the U.S. Supreme Court’s assertion that public facilities would be “separate but equal,” facilities, buses, and education for people of color were often far inferior to those of their white counterparts. Additionally, this period of time was notorious for its discrimination and violence towards African Americans. Michelle’s paternal grandfather moved to Chicago during the Great Migration, a period between 1916 and 1970 in which six million southern African Americans began to move north, fleeing the racial oppression of the South and attempting to find industrial jobs. Often, however, when arriving at these northern cities, they would still face many kinds of discrimination. This prevented African Americans from accumulating wealth and often left them disenfranchised—both forms of discrimination that, Michelle points out, are still felt generations later. This history is one of the reasons that Barack Obama’s presidential election is so symbolically important to African Americans. Additionally, Becoming describes Michelle Obama’s personal experiences living through three historically significant presidential elections: her husband Barack’s two elections in 2008 and 2012, and Donald Trump’s election in 2016.

Other Books Related to Becoming

Books that touch on similar topics as Becoming include Michelle’s husband Barack Obama’s first memoir, Dreams from My Father, which was published in 1998 and explores Barack’s childhood as the son of a Kenyan father and white Kansan mother. Like Becoming, the book touches on themes of understanding one’s own childhood and identity in the context of one’s parents’ histories, as well as the history of the nation as a whole. Michelle also discusses Barack’s second book, The Audacity of Hope, which outlines Barack’s vision for the country prior to his running for president in 2008, and which displays the quintessential optimism and faith in the country that Michelle shares. Becoming can also be compared to other memoirs of First Ladies’ experiences. Particularly relevant is Living History, which is Hillary Clinton’s account of her own childhood through her time as First Lady and how she tried to shape White House initiatives and policies. Barbara and Laura Bush have also published memoirs of their time in the White House: Barbara Bush: A Memoir and Spoken from the Heart, respectively.
Key Facts about Becoming

Staying out of the race. Despite the fact that she has been involved in politics for many years, Michelle has stated that she has no intention of running for any kind of political office.

Codename. Michelle’s secret service codename is “Renaissance,” which she reportedly adopted after reading that Jackie Kennedy was obsessed with the Mona Lisa. 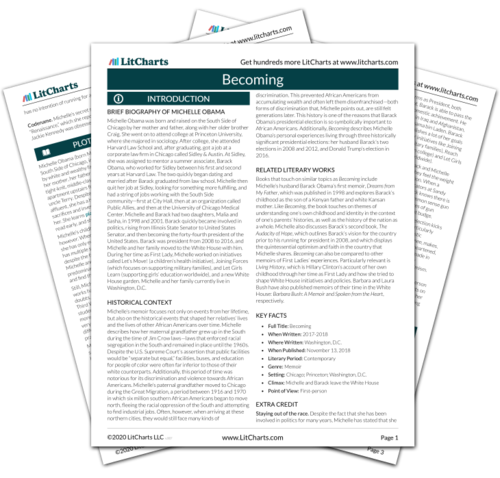 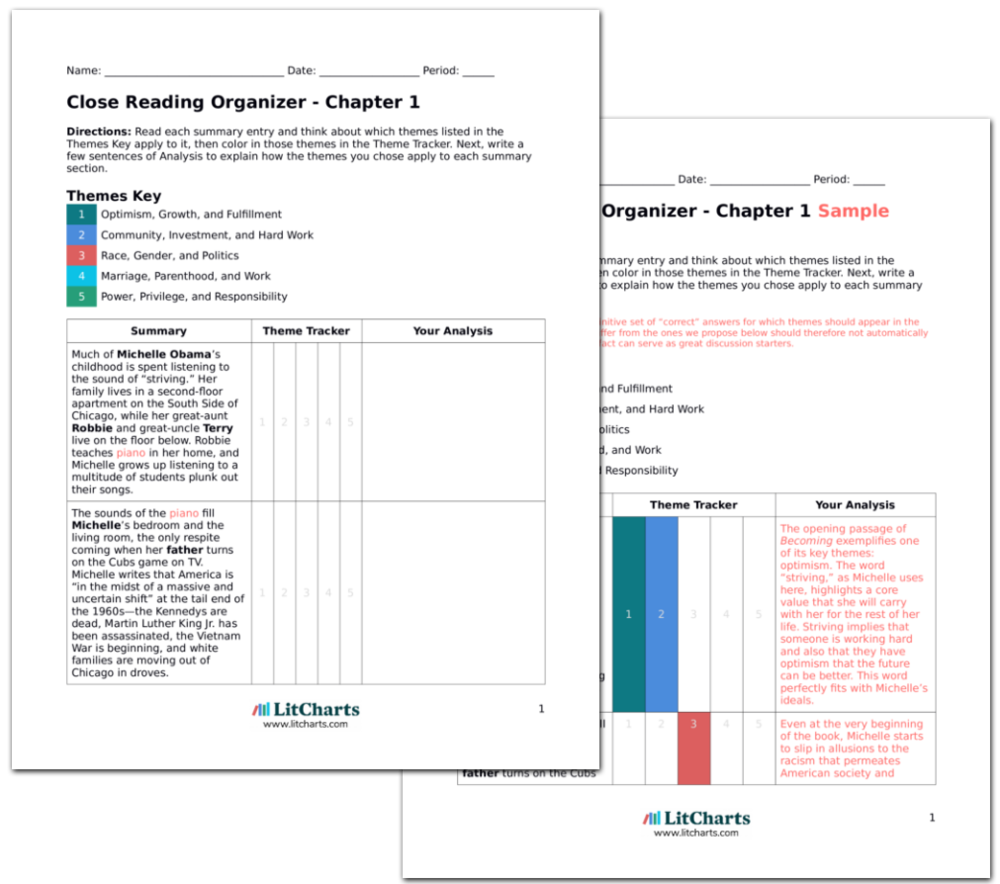