Get LitCharts A+
Samantha’s hot and popular but cruel, vapid boyfriend Rob has been pressuring her to have sex with him for months, and on Cupid Day, Sam finally feels prepared to lose her virginity to Rob. She tells herself that Rob is what she has always wanted—someone cool, attractive, and with social capital to boot. Sam ignores the fact that Rob wouldn’t give her the time of day for years, and actually teased her actively when they were younger. As Sam travels through the time loop and repeats Cupid Day again and again, she has to figure out how to navigate her relationship with Rob as it deteriorates more and more each “day.” As Sam learns more about herself and begins the attempt to become a better person, to help people other than herself, and to figure out what kind of person she wants to be—and to be remembered as—she realizes that Rob simply isn’t part of the picture.

Rob Kokran Quotes in Before I Fall

The Before I Fall quotes below are all either spoken by Rob Kokran or refer to Rob Kokran. For each quote, you can also see the other characters and themes related to it (each theme is indicated by its own dot and icon, like this one:

). Note: all page numbers and citation info for the quotes below refer to the HarperCollins edition of Before I Fall published in 2010.
Chapter 1  Quotes 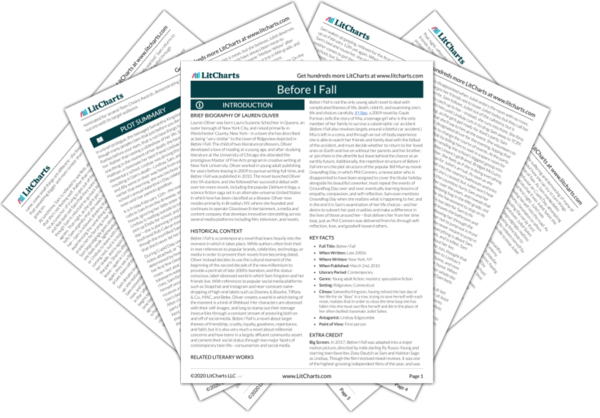 Rob Kokran Character Timeline in Before I Fall

The timeline below shows where the character Rob Kokran appears in Before I Fall. The colored dots and icons indicate which themes are associated with that appearance.

...thing,” but wouldn’t have minded revisiting her life’s greatest hits—her first hookup with her boyfriend, Rob Cokran, as well as her drunken antics and daily pranks with her friends Lindsay, Elody,... (full context)

...roses. Sam commiserates, telling Lindsay that she herself had to sit next to her boyfriend Rob while he filled out the form for her own rose. Sam explains that she and... (full context)

...tonight is the night she is planning on losing her virginity, at long last, to Rob Cokran. Though the two of them have gotten close to doing the deed a few... (full context)

Lindsay condescendingly assures Sam that everything will go fine between her and Rob, and Sam privately thinks about how a major reason behind her desire to lose her... (full context)

...girls approach school, Sam closes her eyes and thinks back to her first kiss with Rob, that past fall at homecoming—she grows dizzy and delighted with the memory. (full context)

...four roses from her boyfriend. It hadn’t even occurred to Sam, she says, to ask Rob to send her more than one. In third period chemistry, Sam and her classmates are... (full context)

...named Tara Flute who is on the fringes of Sam’s friend group, and one from Rob. “Happy cupid day. Luv ya. Happy now?” says Rob’s note. Sam worries that “luv ya”... (full context)

As Sam arrives at the cafeteria for lunch, she sees Rob standing by the register with a plate of fries. She reflects on how, before they... (full context)

Lindsay clears her throat—she is standing by Rob, and she tells him that he is in her seat. Rob gets up and makes... (full context)

...her friends in the throng of people, and she gets nervous, but soon she feels Rob’s arms around her. She turns around to face him and sees that he is very... (full context)

Rob leans into kiss Sam, but she turns away and looks for her friends. Instead she... (full context)

Ally approaches Sam and Rob, telling them to “get a room.” Rob goes off to refill his beer. Ally tells... (full context)

As Sam heads downstairs to find Rob, she has a sinking realization that tonight is not “the night” after all. She feels... (full context)

As the girls leave the party, Rob stops them, and asks Sam where she’s going. Sam tells Rob to let her go... (full context)

...night before, and even asks Sam if she is excited for her big night with Rob. (full context)

In calculus, when Sam’s roses get delivered, she feels a wild bit of hope that Rob’s note will say something different and more romantic, but instead his lukewarm note is exactly... (full context)

...to his party that evening, but before he can get the details out, Sam spots Rob and takes off down the hall calling his name. She catches up with Rob and... (full context)

Sam tries to convince Rob that they should hang out earlier that evening, but Rob tells Sam that he wants... (full context)

...and Ally sing along to the radio in the next room. Lindsay asks Sam if Rob has told her that he loves her yet—when Sam hesitates, Lindsay assures her that Rob... (full context)

...her body turn to ice, but then a pair of arms wrap around her—it is Rob. Sam tells Rob she needs to talk to him privately, but Rob is drunk, and... (full context)

After ten minutes have passed, Sam realizes Rob isn’t coming back for her. She begins feeling more and more anxious, but tries to... (full context)

...she doesn’t feel well, but they tease her about having been upstairs having sex with Rob. Sam insists that she’s leaving with or without them—she is angry at all of them... (full context)

...and answers her mother’s repeated questions about whether she fought with her friends or with Rob condescendingly. There is a thin, faded stripe of red nail polish just inside the doorway—freshman... (full context)

...frustrated. She remembers the last time she cried this hard—an afternoon in sixth grade when Rob Cokran told everybody that Sam was too big of a dork for him to go... (full context)

...Daimler is a “perv.” Kent invites Sam to his party, again, and again, Sam sees Rob down the hallway. She doesn’t feel like going to see Rob, and she extends her... (full context)

...her friends ignore her wishes, she pleads with them, telling them she’s having trouble with Rob. Earlier, Sam had texted him that they needed to talk about tonight. Now, she looks... (full context)

Rob comes up to the girls’ table and asks Sam what she wants to talk about.... (full context)

...prepare to leave the restaurant, Sam sees that she has gotten an angry text from Rob, asking where she is, and whether she remembers that they had plans tonight. Sam texts... (full context)

Sam and the Pugs arrive at the party—Rob spots Sam almost immediately and pushes his way toward her, pinning her against a wall.... (full context)

...to wait, but Sam refuses, making her way down the hall. She runs straight into Rob, who is drunk. Sam urgently tells him that she wants to leave, but Rob insists... (full context)

Rob drags Sam into a dark room, and the two of them begin making out on... (full context)

...has happened with any of her friends, and Sam tells a white lie—she says that Rob dumped her. She tells her mom that the two of them wanted different things, and... (full context)

...over Sam’s eyes, and she knows from the smell of lemon balm that they are Rob’s. Rob uncovers Sam’s eyes and asks if she’s avoiding him—she tells him she isn’t, but... (full context)

Rob asks Sam if she got his rose—she tells him that she cut fifth period. Rob... (full context)

At that moment, Juliet walks into the cafeteria. Sam watches her intensely, and Rob walks away. Juliet does not have a single rose with her, and Sam is deeply... (full context)

...that Lindsay will have gone off to find Patrick. Sam knows that this means that Rob will be coming up to her soon, and sure enough, there he is. He tells... (full context)

Sam tells Rob she’d like to make things up to him. She tells him they need some one-on-one... (full context)

...has already arrived—instead, the scream is followed by laughter, and Ally calls Sam over to her—Rob is in the hallway in nothing but underwear and sneakers. Sam is too amused to... (full context)

...want to kiss Sam after everything that happened tonight, and when she’s still together with Rob. Sam tells Kent that she broke up with Rob, and Kent says that that’s at... (full context)

In the cafeteria, Rob approaches Sam to say hello. He tries to put his arm around her, but she... (full context)

Rob protests that Sam can’t break up with him—he’s been waiting for her for months. His... (full context) 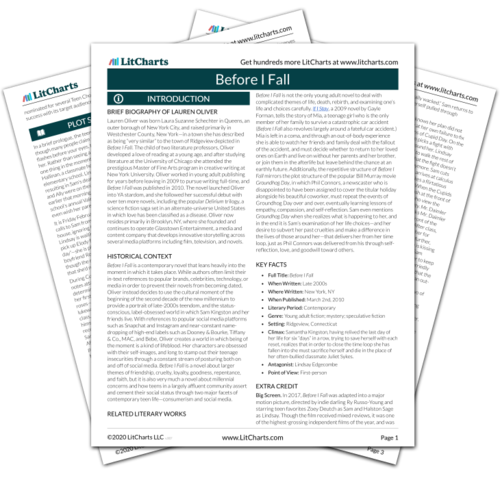 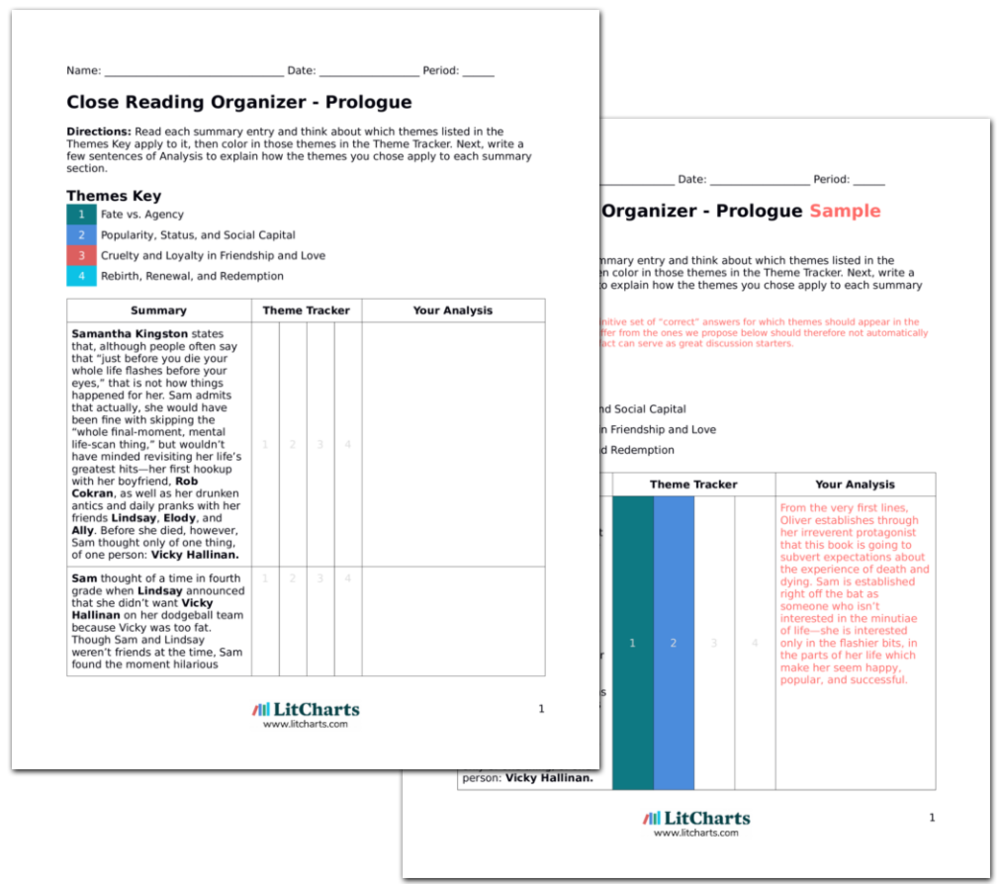