Download this LitChart! (PDF)
Teachers and parents! Struggling with distance learning? Our Teacher Edition on Being Mortal can help.

Welcome to the LitCharts study guide on Atul Gawande's Being Mortal. Created by the original team behind SparkNotes, LitCharts are the world's best literature guides.

A concise biography of Atul Gawande plus historical and literary context for Being Mortal.

A quick-reference summary: Being Mortal on a single page.

In-depth summary and analysis of every chapter of Being Mortal. Visual theme-tracking, too.

Explanations, analysis, and visualizations of Being Mortal's themes.

Being Mortal's important quotes, sortable by theme, character, or chapter.

Description, analysis, and timelines for Being Mortal's characters.

Explanations of Being Mortal's symbols, and tracking of where they appear.

An interactive data visualization of Being Mortal's plot and themes.

Gawande was born in Brooklyn, New York. He is the son of two Indian immigrants to the United States, both of whom were physicians. When he was young, his family moved to Athens, Ohio. He then earned a bachelor’s degree in biology and political science from Stanford University in 1987 and joined Al Gore’s presidential campaign in 1988. He then became a Rhodes Scholar and earned an M.A. in Philosophy, Politics, and Economics at Oxford. After beginning Harvard Medical School in 1990, Gawande took a brief break to become Bill Clinton’s healthcare lieutenant during the 1992 campaign and then became a senior advisor in the Department of Health and Human Services after Clinton’s inauguration. He returned to medical school in 1993 and then graduated in 1995. Subsequently, Gawande earned a Master of Public health from the Harvard School of Public Health in 1999. After beginning his residency, Gawande began writing for Slate and then contributing to The New Yorker, leading him to write his first book, Complications, in 2002. In 2006, he became a MacArthur Fellow for his work investigating modern surgical practices and medical ethics. In 2007, he became director of the WHO’s effort to reduce surgical deaths. He wrote his second book, Better, in 2007, and then his third, The Checklist Manifesto, in 2009. He published Being Mortal in 2014, which became a #1 New York Times bestseller. In June 2018, he became the CEO for Haven Healthcare, formed by Warren Buffett, Jeff Bezos, and Jamie Dimon. He stepped down from the position in May 2020, and Joe Biden appointed him to his COVID-19 task force in Fall 2020. He is currently a surgeon at Brigham and Women’s Hospital in Boston and lives with his wife Kathleen and three children in Newtown, Massachusetts.
Get the entire Being Mortal LitChart as a printable PDF.
"My students can't get enough of your charts and their results have gone through the roof." -Graham S.
Download 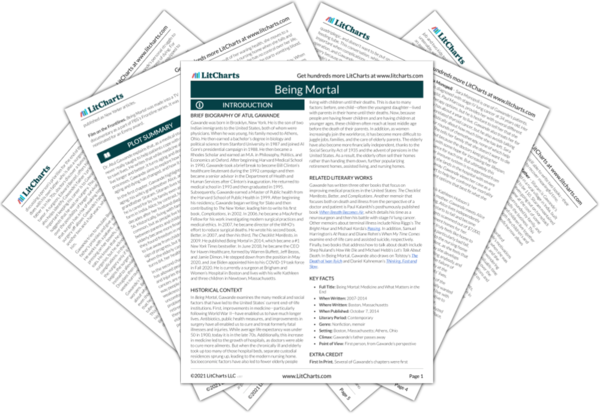 Historical Context of Being Mortal

In Being Mortal, Gawande examines the many medical and social factors that have led to the United States’ current end-of-life institutions. First, improvements in medicine—particularly following World War II—have enabled us to have much longer lives. Antibiotics, public health measures, and improvements in surgery have all enabled us to cure and treat formerly fatal illnesses and injuries. While average life expectancy was under 50 in 1900, today it is in the late 70s. Additionally, this increase in medicine led to the growth of hospitals, as doctors were able to cure more ailments. But when the chronically ill and elderly took up too many of those hospital beds, separate custodial residences sprung up, leading to the modern nursing home. Socioeconomic factors have also led to fewer elderly people living with children until their deaths. This is due to many factors: before, one child—often the youngest daughter—lived with parents in their home until their deaths. Now, because people are having fewer children and are having children at younger ages, these children often reach at least middle age before the death of their parents. In addition, as women increasingly join the workforce, it has become more difficult to juggle jobs, families, and the care of elderly parents. The elderly have also become more financially independent, thanks to the Social Security Act of 1935 and the advent of pensions in the United States. As a result, the elderly often sell their homes rather than handing them down, further popularizing retirement homes, assisted living, and nursing homes.

Other Books Related to Being Mortal

Gawande has written three other books that focus on improving medical practices in the United States: The Checklist Manifesto, Better, and Complications. Another memoir that focuses both on death and illness from the perspective of a doctor and patient is Paul Kalanithi’s posthumously published book When Breath Becomes Air, which details his time as a neurosurgeon and then his battle with stage IV lung cancer. Other memoirs about terminal illness include Nina Riggs’s The Bright Hour and Michael Korda’s Passing. In addition, Samuel Harrington’s At Peace and Diane Rehm’s When My Time Comes examine end-of-life care and assisted suicide, respectively. Finally, two books that address how to talk about death include Shep Nuland’s How We Die and Michael Hebb’s Let’s Talk About Death. In Being Mortal, Gawande also draws on Tolstoy’s The Death of Ivan Ilyich and Daniel Kahneman’s Thinking, Fast and Slow.
Key Facts about Being Mortal

Extra Credit for Being Mortal

Film on the Frontlines. Being Mortal was made into a TV documentary as a part of PBS’s Frontline series. It was nominated for an Emmy award. 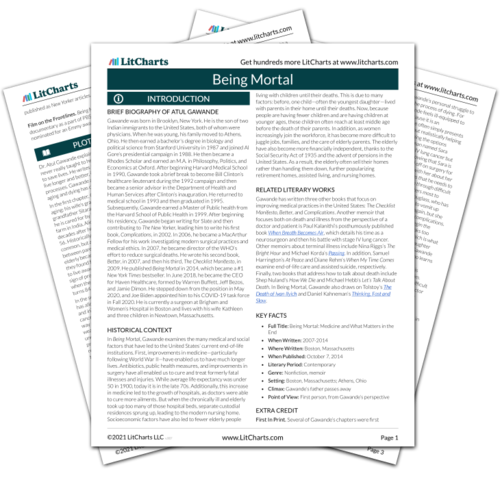 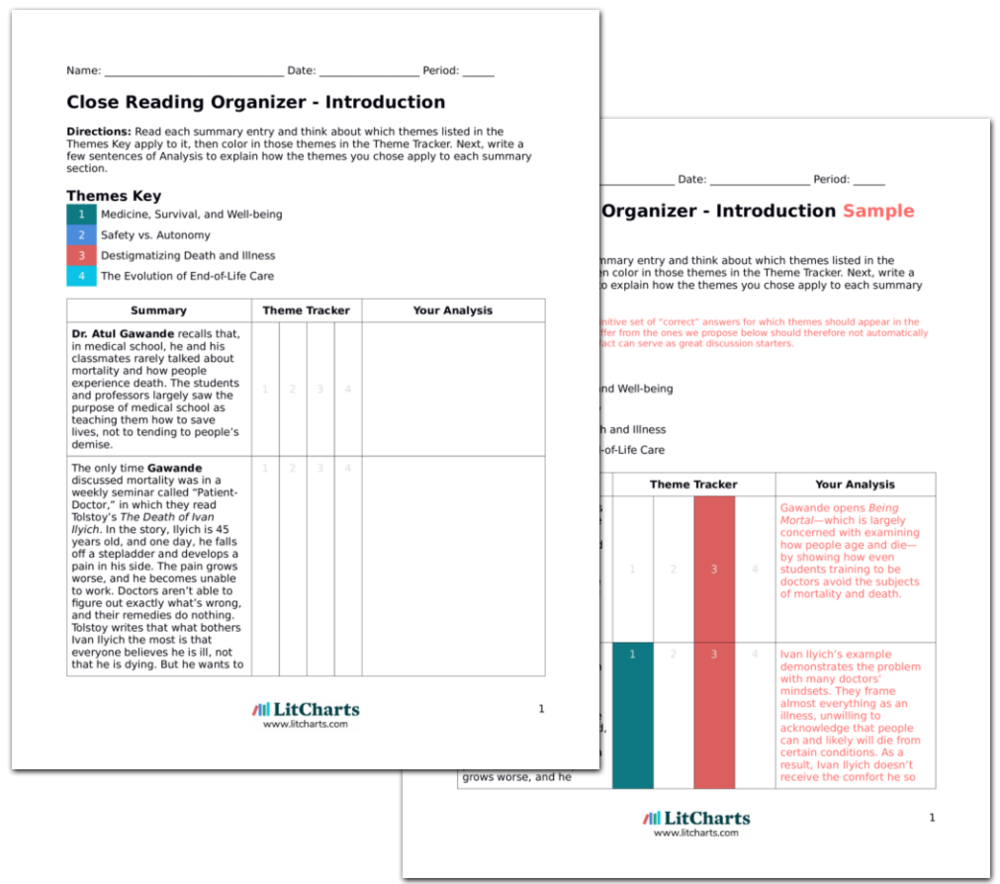