Although flags can theoretically represent positive values, such national unity and a feeling of community, in Benito Cereno flags (or the absence thereof) symbolize the violent ambitions that can drive groups of people to dominate over others. When Captain Delano first sees the San Dominick, he notices that the ship has no flag or “colors.” This immediately suggests that the ship might be behaving illegally, not respecting ordinary rules of navigation. Indeed, the hierarchy on the San Dominick has been reversed and it is no longer the Spanish sailors, but the African slaves, who are in charge, illegally trying to reroute the ship. Later, Delano laughs at the slave Babo’s use of a Spanish flag to shave his master Benito Cereno. According to his racist beliefs, Delano concludes that this must reflect black people’s infantile appreciation of bright colors. He does not understand that Babo might be using this flag intentionally, in order to remind Cereno that he—not the Spaniards—is currently in charge. These episodes question the limits between national legitimacy and piracy. Who is more legitimate: the Spanish empire and the American nation, which legalize slavery, or the slaves, who are fighting for their own liberty outside of national rules? Herman Melville does not explicitly answer this question, but he certainly suggests that nations are not inherently less piratical than other groups, since they too steal and kill. Rather, what determines legitimacy, Melville suggests, should be the values that symbols such as flags represent, not the mere existence of flags per se. In this sense, the Spanish and American nations might be just as piratical as the flag-less, slave-controlled ship.

The Benito Cereno quotes below all refer to the symbol of Flags. For each quote, you can also see the other characters and themes related to it (each theme is indicated by its own dot and icon, like this one:

). Note: all page numbers and citation info for the quotes below refer to the Penguin edition of Benito Cereno published in 2016.
Benito Cereno Quotes

Get the entire Benito Cereno LitChart as a printable PDF.
"My students can't get enough of your charts and their results have gone through the roof." -Graham S.
Download 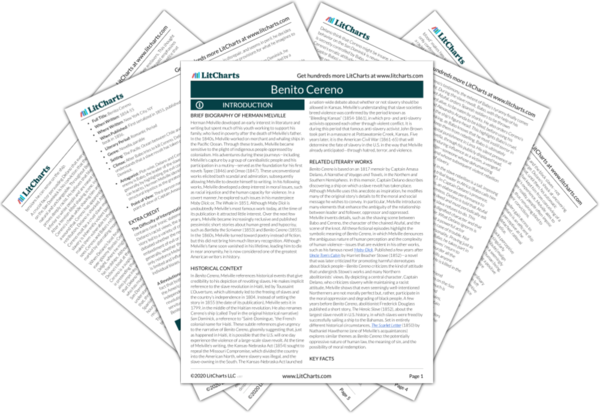 The timeline below shows where the symbol Flags appears in Benito Cereno. The colored dots and icons indicate which themes are associated with that appearance.

...a ship enter the bay. Delano is shocked to notice that the boat carries no flag. Although Delano’s ship is in an isolated spot and it is not uncommon to hear ... (full context) 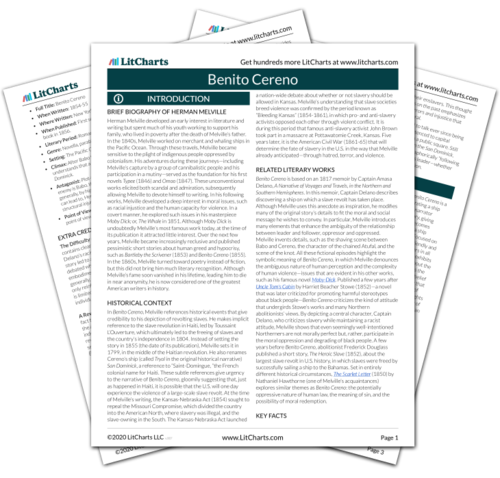 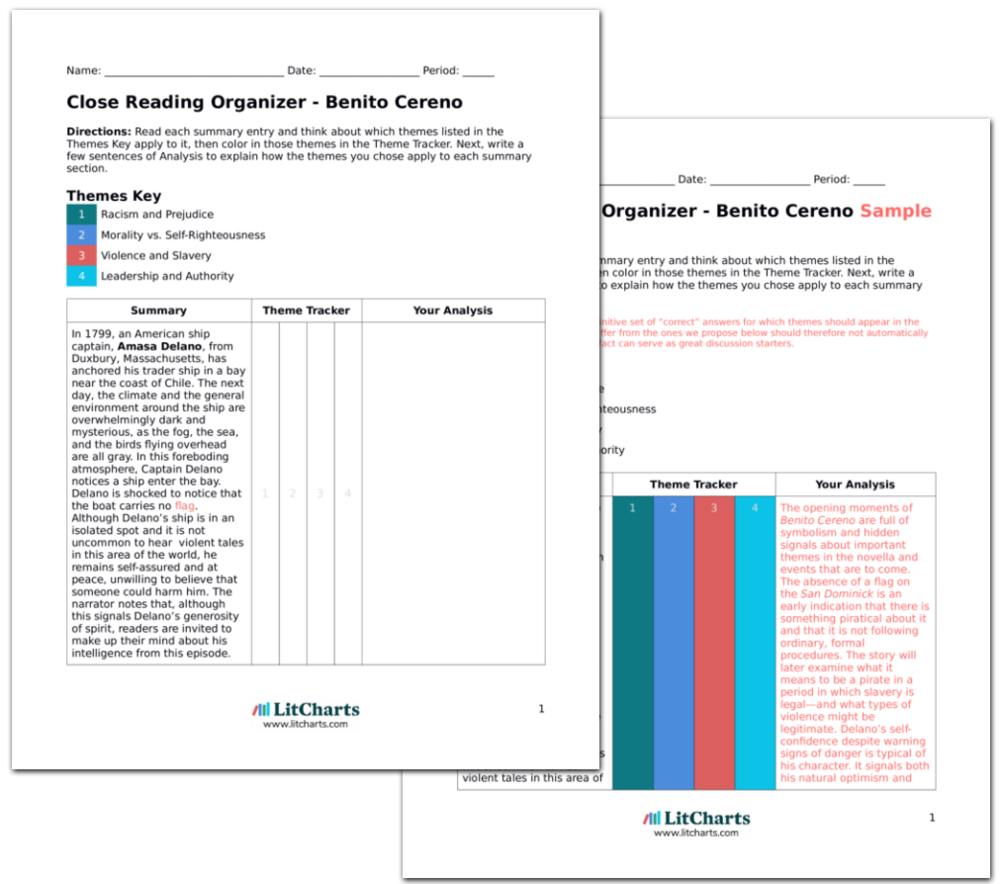