Download this LitChart! (PDF)
Teachers and parents! Struggling with distance learning? Our Teacher Edition on Berenice can help.

Welcome to the LitCharts study guide on Edgar Allan Poe's Berenice. Created by the original team behind SparkNotes, LitCharts are the world's best literature guides.

A concise biography of Edgar Allan Poe plus historical and literary context for Berenice.

A quick-reference summary: Berenice on a single page.

In-depth summary and analysis of every of Berenice. Visual theme-tracking, too.

Explanations of Berenice's symbols, and tracking of where they appear.

An interactive data visualization of Berenice's plot and themes.

Edgar Allan Poe was born on January 19, 1809 in Boston, Massachusetts. He was the second child of David and Eliza Poe, both of whom were actors. Poe’s father abandoned the family shortly after Poe was born, and Poe’s mother died the next year. Poe was taken in by John and Frances Allan, who raised him and put him through secondary school and helped support him as a young adult. Poe and his foster father had a falling out over Poe’s gambling debts and failed military career after Frances Allan died, and they became estranged from one another. Determined to become a writer, Poe initially found fame as a literary critic whose opinion was almost universally respected. His poems and short stories were also popular, but the Panic of 1837 meant he was not always paid for his work and he frequently found himself living in dire poverty. Poe famously married his first cousin, Virginia Clemm, when she was 13 and he was 26 in 1835, several years before Poe’s only complete novel, The Narrative of Arthur Gordon Pym, was published. They remained married until Virginia’s death in 1847, after which Poe never remarried. Poe’s life was marred by an ongoing battle with alcoholism, which played a significant role in his inability to maintain a long-term job at literary magazines and newspapers and his subsequent struggle against poverty. In 1849 Poe arrived in Philadelphia sick and desperate for money to get a train ticket to Virginia. His friend George Lippard helped raise funds for his train ticket and food. A short time later, Poe was found delirious and seriously ill on the streets of Baltimore, but unable to explain why he was there or what had happened to him. He was taken to a hospital but died several days later on October 7, 1849.
Get the entire Berenice LitChart as a printable PDF.
"My students can't get enough of your charts and their results have gone through the roof." -Graham S.
Download 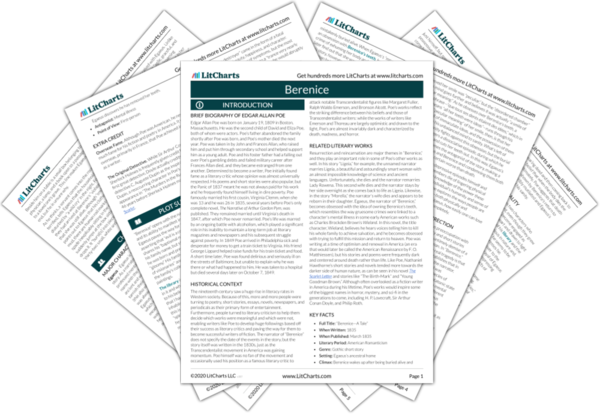 The nineteenth century saw a huge rise in literacy rates in Western society. Because of this, more and more people were turning to poetry, short stories, essays, novels, newspapers, and periodicals as their primary form of entertainment. Furthermore, people turned to literary criticism to help them decide which works were meaningful and which were not, enabling writers like Poe to develop huge followings based off their success as literary critics and paving the way for them to become successful writers of fiction. The narrator of “Berenice” does not specify the date of the events in the story, but the story itself was written in the 1830s, just as the Transcendentalist movement in America was gaining momentum. Poe himself was no fan of the movement and occasionally used his position as a famous literary critic to attack notable Transcendentalist figures like Margaret Fuller, Ralph Waldo Emerson, and Bronson Alcott. Poe’s works reflect the striking difference between his beliefs and those of Transcendentalist writers: while the works of writers like Emerson and Thoreau are largely optimistic and drawn to the light, Poe’s are almost invariably dark and characterized by death, madness, and horror.

Other Books Related to Berenice

Resurrection and reincarnation are major themes in “Berenice,” and they play an important role in some of Poe’s other works as well. In his story “Ligeia,” for example, the unnamed narrator marries Ligeia, a beautiful and astoundingly smart woman with an almost impossible knowledge of science and ancient languages. Unfortunately, she dies and the narrator remarries Lady Rowena. This second wife dies and the narrator stays by her side overnight as she comes back to life as Ligeia. Likewise, in the story “Morella,” the narrator’s wife dies and appears to be reborn in their daughter. Egaeus, the narrator of “Berenice,” becomes obsessed with the idea of owning Berenice’s teeth, which resembles the way gruesome crimes were linked to a character’s mental illness in some early American works such as Charles Brockden Brown’s Wieland. In this novel, the title character, Wieland, believes he hears voices telling him to kill his whole family to achieve salvation, and he becomes obsessed with trying to fulfill this mission and return to heaven. Poe was writing at a time of optimism and renewal in America (an era that would later be called the American Renaissance by F. O. Matthiessen), but his stories and poems were frequently dark and centered around death rather than life. Like Poe, Nathaniel Hawthorne’s short stories and novels tended more towards the darker side of human nature, as can be seen in his novel The Scarlet Letter and stories like “The Birth-Mark” and “Young Goodman Brown.” Although often overlooked as a fiction writer in America during his lifetime, Poe’s works would inspire some of the biggest names in horror, mystery, and sci-fi in the generations to come, including H. P. Lovecraft, Sir Arthur Conan Doyle, and Philip Roth.
Key Facts about Berenice

Overseas Fame. Although Poe was American, he never enjoyed much fame for his fiction and poetry in America. It was actually overseas, primarily in France, that Poe achieved immense fame as a writer.

The Original Detective. While Sir Arthur Conan Doyle’s Sherlock Holmes is frequently given credit for being literature’s first great detective, Doyle actually credits Poe’s literary detective C. Auguste Dupin as the inspiration for Sherlock. Dupin, a reoccurring character in Poe’s stories, makes his first appearance in “The Murders in the Rue Morgue” in 1841, about 46 years before Sherlock Holmes made his debut in A Study in Scarlet. 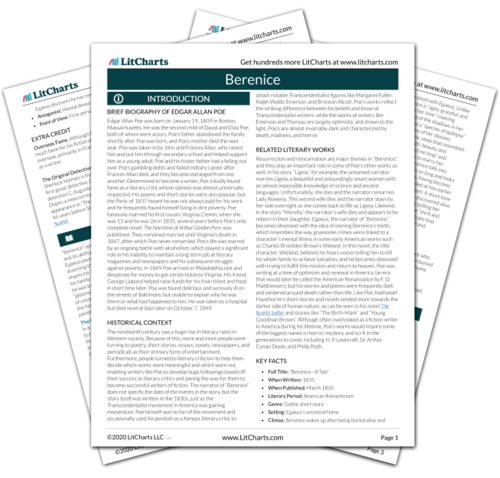 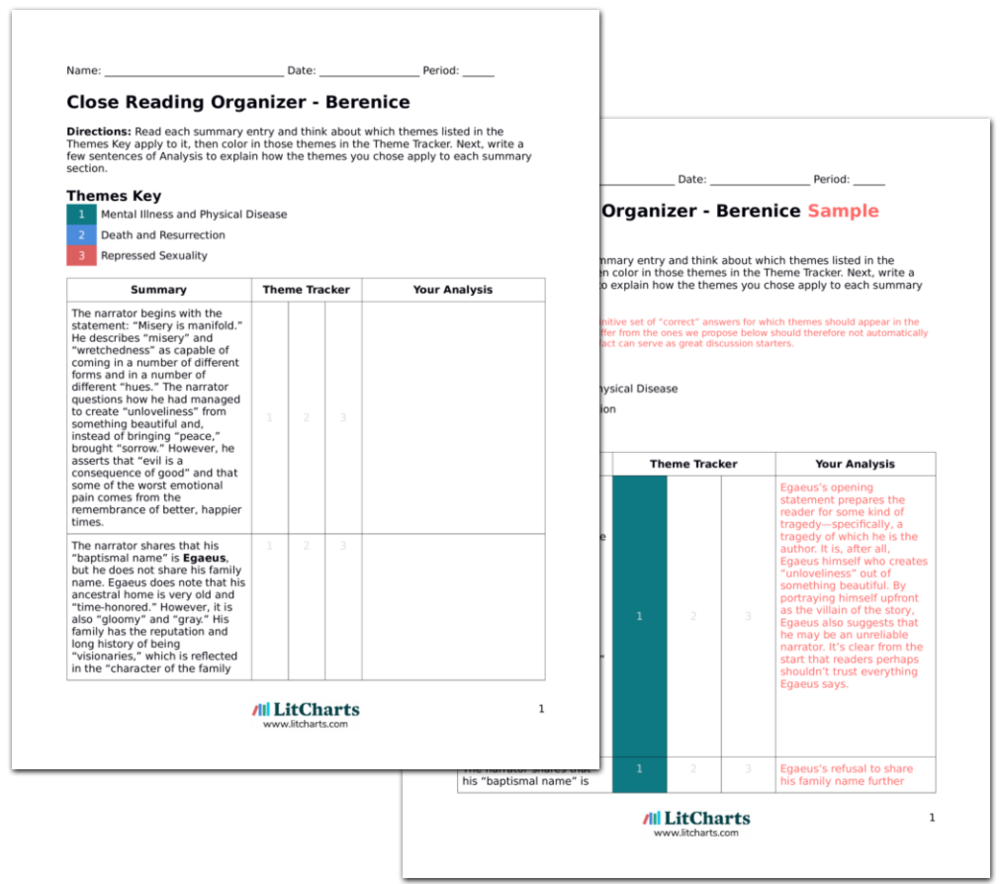