Get LitCharts A+
LitCharts assigns a color and icon to each theme in Binti, which you can use to track the themes throughout the work.

Binti, the novella’s titular character, is a mathematically gifted young woman of the South African Himba people. Her world turns upside down when she’s admitted to Oomza University far across the galaxy—on a full scholarship. In the world of the novella, the Himba stick close to home and seldom leave their ancestral lands, even for nearby cities—and no Himba has ever gone to Oomza Uni. Notably, Binti leaves her home believing she knows exactly who and what she is: a proud Himba, a talented mathematician, and a skilled “master harmonizer” (a person who can control electrical currents to create various technologies). However, as Binti travels and meets people and beings very different from the Himba, including the jellyfish-like aliens known as the Meduse that hijack her spaceship, she begins to see her identity and her home in a new light. Ultimately, the novel suggests that while staying close to home may help a person feel secure, traveling offers people the opportunity to see their home and their culture through fresh eyes, thereby gaining a more nuanced understanding of who they are.

Binti is at a crossroads in how she thinks of her identity as she leaves her family home for the spaceship bound for Oomza Uni under the cover of night. She knows what her life will entail if she stays: she’ll marry, she’ll take over her father’s workshop, and she’ll always have access to the otjize (a mixture of oil, clay, and scent that Himba spread over their bodies and hair) that marks her as a proud member of the Himba people. However, she also knows that the only way to reach her full potential as a mathematician is to leave her home and pursue her education across the galaxy, where no Himba has ever been. This will destroy her prospects for marriage, if not permanently damage her relationships with her family members. Already, then, Binti sees herself as flouting the traditions and expectations of her people, even as she constantly—and proudly—thinks of her otjize, traditional ankle bracelets, and special braided hairstyle to ground and calm herself in stressful moments. In this sense, as Binti sets off into the wider world, she purposefully takes pride in the things that do mark her as Himba—even as she does the one thing that Himba never do—to help her feel more at peace with her decision to leave. It’s puzzling, then, when a security guard at the station reads her astrolabe (a communication device that contains Binti’s past and future) and not only congratulates her on her admittance to Oomza Uni but warmly says that Binti is the pride of her people. This offers the hope that Binti won’t suffer as much as she believes she will for her “transgression”; it may well be possible to reconcile her choice to go to Oomza Uni with the beliefs and expectations of her culture.

Leaving, however, is only the first challenge to Binti’s identity—even as she tries to reconcile her transformations with the home culture she loves. Following the Meduse’s attack on the spaceship, Binti befriends a young Meduse named Okwu and brokers peace between the Meduse and Oomza Uni (the university stole the chief Meduse’s stinger; the Meduse attacked the ship to try to get the stinger back). Following this and as Binti begins her education, she’s disturbed by how the things that marked her as Himba seem to change or slip away altogether. To earn the Meduse’s trust, she not only promises them a jar of precious otjize, which they discover has healing powers; they also sting her and transform her braids into okuoko, or blue Meduse tentacles. The okuoko in particular present a major problem for Binti. Traditionally, her hair is braided in a pattern devised by her family members and which, if a person knows how to “read” her braids, tells the story of her family. The 10 thick okuoko make these braids impossible, thereby making Binti feel unmoored and separated from her family, her home, and her history. However, the okuoko tell a story of their own: Okwu explains that Binti’s okuoko symbolize that she’s become a part of the Meduse family. In this sense, though her identity is changing, it’s not necessarily changing for the worse—her new hair simply reflects what she’s been through and conveys that her family is bigger than when she left home.

Similarly upsetting is Binti’s dwindling supply of otjize and her quest to track down the ingredients to make more once she’s on the planet that’s home to Oomza Uni. It’s heartbreaking when she agrees to give the Meduse her jar of otjize from home, as Binti feels like she’s quite literally giving her home and her culture away—the otjize is made with clay that’s only found in her ancestral lands, and it smells undeniably of Earth and of the life she left behind. However, as with her new okuoko, exchanging the otjize with the Meduse symbolizes Binti’s expanding family and her shifting place in the world. Meanwhile, it’s telling that while Binti agonizes over whether the otjize she makes with new ingredients is real, it stills behaves exactly as Earth-made otjize does, colors Binti’s skin the same reddish color, and even heals Okwu’s injuries like the original otjize did. Through this, Binti begins to see that even as her identity changes and her family expands over the course of her travels, it’s still possible to keep the rituals and practices that make her feel secure and at home alive. Traveling, the novel suggests, may change a person’s identity, but it also has the power to make clear what’s important to maintain in terms of one’s traditions and customs from home.

The ThemeTracker below shows where, and to what degree, the theme of Identity, Home, and Travel appears in each chapter of Binti. Click or tap on any chapter to read its Summary & Analysis.
How often theme appears:
chapter length:
Chapter
Binti
Get the entire Binti LitChart as a printable PDF.
"My students can't get enough of your charts and their results have gone through the roof." -Graham S.
Download 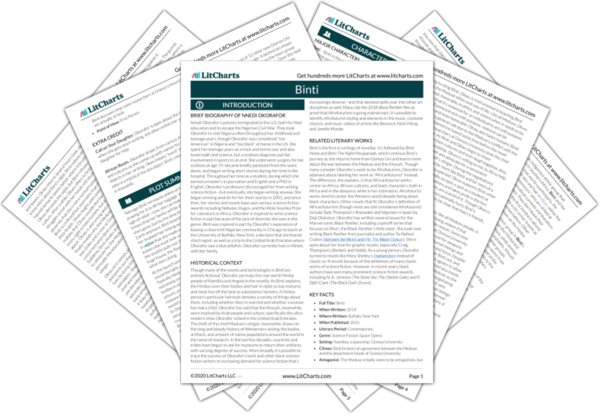 Below you will find the important quotes in Binti related to the theme of Identity, Home, and Travel.
Binti Quotes

“Congratulations,” he said to me in his parched voice, holding out my astrolabe.

I frowned at him, confused. “What for?”

“You are the pride of your people, child,” he said, looking me in the eye. Then he smiled broadly and patted my shoulder. He’d just seen my entire life. He knew of my admission into Oomza Uni.

“It smells like jasmine flowers,” she said to the woman on her left, surprised.

“No shit?” one woman said. “I hear it smells like shit because it is shit.”

“No, definitely jasmine flowers. It is thick like shit, though.”

“Is her hair even real?” another woman asked the woman rubbing her fingers.

“These ‘dirt bathers’ are a filthy people,” the first woman muttered.

I just turned back around, my shoulders hunched. My mother had counseled me to be quiet around Khoush.

“I couldn’t help it,” he said, his fingertips reddish with my otjize.

“You can’t control yourself?” I snapped.

“You have exactly twenty-one,” he said. “And they’re braided in tessellating triangles. Is it some sort of code?”

I wanted to tell him that there was a code, that the pattern spoke my family’s bloodline, culture, and history. That my father had designed the code and my mother and aunties had shown me how to braid it into my hair.

My brothers had all just laughed and dismissed the idea. My parents said nothing, not even congratulations. Their silence was answer enough. Even my best friend Dele. He congratulated and told me that I was smarter than everyone at Oomza Uni, but then he’d laughed, too. “You cannot go,” he simply said. “We’re Himba. God has already chosen our paths.”

When I’d sit in the desert, alone, listening to the wind, I would see and feel the numbers the way I did when I was deep in my work in my father’s shop. And those numbers added up to the sum of my destiny.

So in secret, I filled out and uploaded the acceptance forms. The desert was the perfect place for privacy when they contacted my astrolabe for university interviews.

I couldn’t give all my otjize to this Meduse; this was my culture.

“No,” it said. “That is something else. You understand, because you truly are what you say you are—a harmonizer.”

But above all this, outside of the horror of what we’d done, we all felt an awesome glorious...shock. Our hair hung in thick clumps, black in the moonlight. Our skin glistened, dark brown. Glistened. And there had been a breeze that night and it felt amazing on our exposed skin.

“That is true, but what about your home? Will you ever return?”

“I have studied your people,” she said. “They don’t like outsiders.”

I’ll never forget the way the chief’s body went from blue to clear the moment the stinger became a part of it again. Only a blue line remained at the point of demarcation where it had reattached—a scar that would always remind it of what human beings of Oomza Uni had done to it for the sake of research and academics.

I pulled my hand away and took a deep breath. If I couldn’t make otjize here, then I’d have to...change. I touched one of my tentacle-like locks and felt a painful pressure in my chest as my mind tried to take me to a place I wasn’t ready to go. I plunged my two fingers into my new concoction...and scooped it up. I spread it on my flesh. Then I wept. 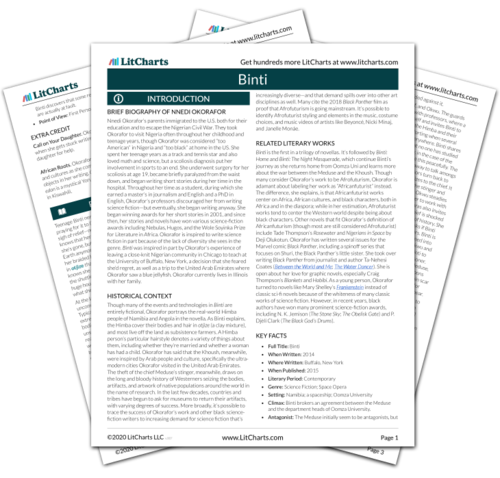 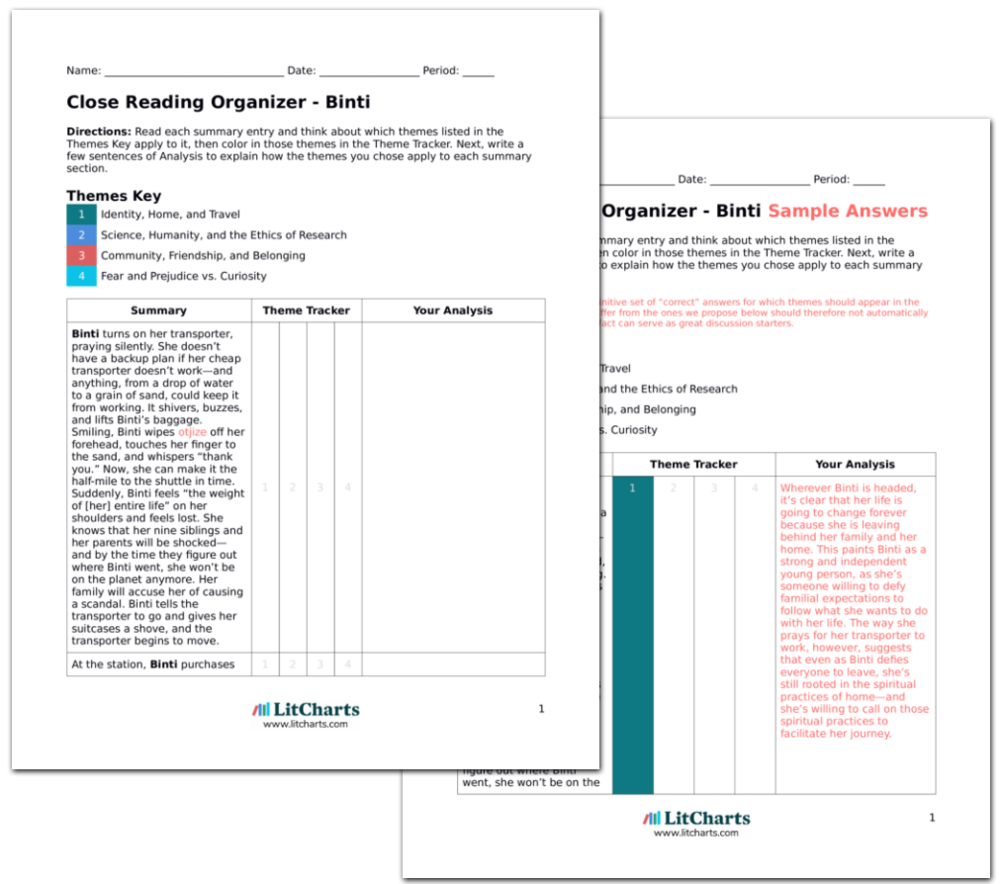