“Yellow metal,” or gold, symbolizes the Wasichus’ (white peoples’) greed and, by extension, the looming threat that this greed poses to the Lakota people. When gold is discovered in the Black Hills during an expedition led by Custer in 1874, hundreds of Wasichu miners flock to the Hills in search of wealth, despite a 1868 treaty that reserved this land for the Lakotas. When Black Elk mentions the “yellow metal that makes the Wasichus crazy,” he expresses disdain for the specific problems this craziness for gold causes for his people (stolen land and broken treaties), as well as a more general disapproval of the Wasichus’ worldview: to Black Elk, the Wasichus obsession with gold symbolizes their disrespect of his people and their disregard for the earth.

By extension, objects that Black Elk describes as “bright” or “shining” also evoke gold and greed. For example, when Black Elk visits London while touring with Buffalo Bill’s Wild West Show, he meets Grandmother England (Queen Victoria of Great Britain) who, he notes, wears a “shining” dress and hat, which presumably refers to the gold or jewels with which the garments are adorned. Although Grandmother England is arguably one of the kinder Wasichus with whom Black Elk interacts, the “shining” quality of her attire evokes the greed and excess of Wasichu culture that the British Crown epitomizes.

The Black Elk Speaks quotes below all refer to the symbol of Yellow Metal / Gold. For each quote, you can also see the other characters and themes related to it (each theme is indicated by its own dot and icon, like this one:

). Note: all page numbers and citation info for the quotes below refer to the University of Nebraska Press edition of Black Elk Speaks published in 2014.
Chapter 2 Quotes

Once we were happy in our own country and we were seldom hungry, for then the two-leggeds and the four-leggeds lived together like relatives, and there was plenty for them and for us. But the Wasichus came, and they have made little islands for us and other little islands for the four-leggeds, and always these islands are becoming smaller, for around them surges the gnawing flood of the Wasichu; and it is dirty with lies and greed.

Our people knew there was yellow metal in little chunks up there; but they did not bother with it, because it was not good for anything. 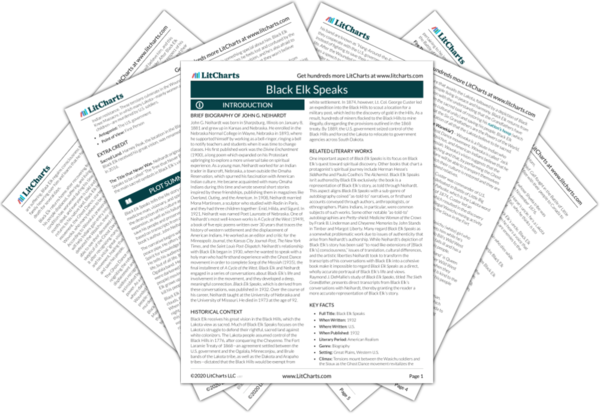 The timeline below shows where the symbol Yellow Metal / Gold appears in Black Elk Speaks. The colored dots and icons indicate which themes are associated with that appearance.

...their country. He later learns that the Wasichus and his people are fighting over “the yellow metal that makes [the Wasichus] crazy.” The Wasichus wanted to build a road through Black Elk’s... (full context)

...Lakota people’s country. Custer and his people had broken their promise because they found “ yellow metal ” in the Hills. Black Elk’s people already knew there was yellow metal in the... (full context)

...the Soldiers’ Town because more Wasichus are coming from the Missouri River to find the yellow metal in the Black Hills. Black Elk’s people make plans to put an end to the... (full context)

...the Wasichus and people from the Lakota, Shyela, and Blue Cloud tribes to discuss the gold-digging. The talk is unsuccessful: Black Elk’s father tells him that the Grandfather at Washington wants... (full context)

...on horseback. When they arrive, most of the Wasichus are dead. Black Elk takes a watch that is hanging from a dying soldier’s belt and hangs it around his own neck. (full context)

...the Lakotas, who hunted the bison for their meat, the Wasichus kill the bison for yellow metal , taking only the hides and sometimes only the tongues. Increasingly, Black Elk’s people are... (full context)

...houses and the large amounts of people in the towns. He’s also struck by the bright lights in the towns at night, which shine so brightly he cannot see the stars. Black... (full context) 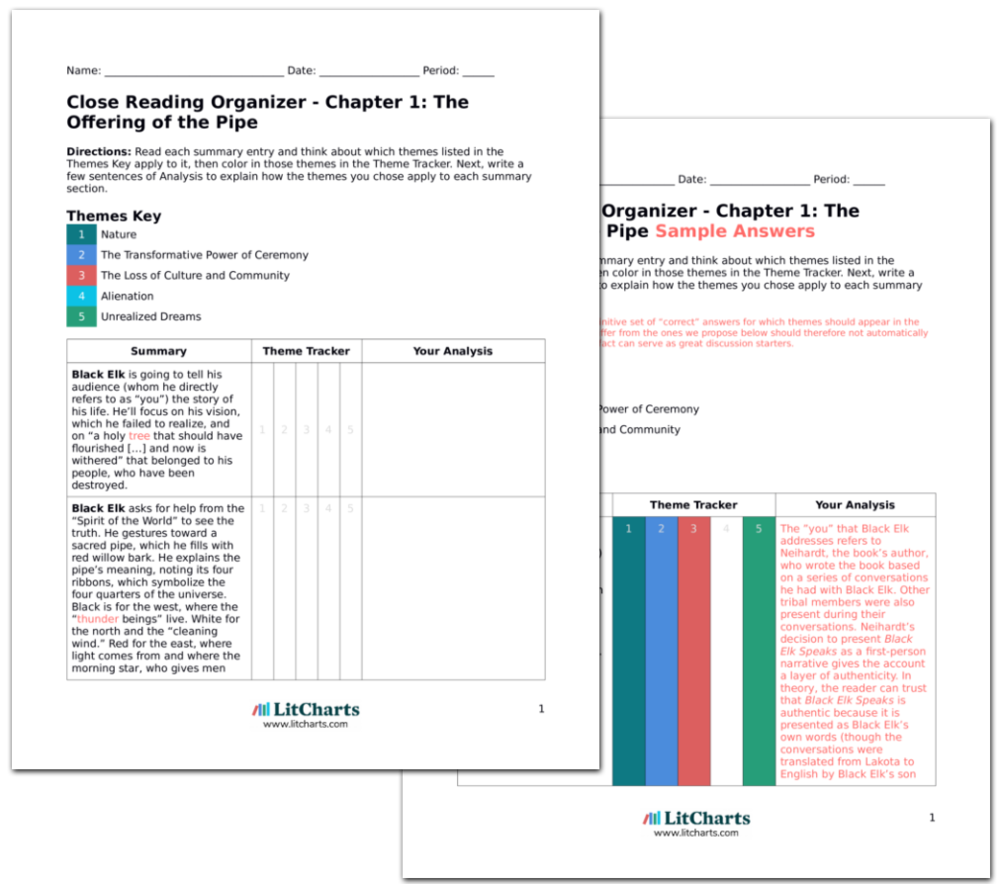