Get LitCharts A+
LitCharts assigns a color and icon to each theme in Bless Me, Ultima, which you can use to track the themes throughout the work.

Much of the plot is powered by different characters' desires for revenge and punishment. Chávez wants revenge against Lupito, Tenorio wants revenge against Ultima and Narciso, and even Ultima wants to punish Tenorio for tampering with fate. It seems that the gods also have a similar human need for punishment – at first it is only the Christian God with his horribly eternal Hell, but even the golden carp plans to drown all the sinners someday. The briefly-mentioned atomic bomb also represents a real-life cataclysmic punishment that echoes the apocalypses of the gods.

In the end, Ultima and the Virgin of Guadalupe are the only compromising, forgiving alternatives. The Virgin Mary is a Christian symbol, but Antonio sees her as a mother-figure willing to listen and forgive, unlike the strict male gods. Ultima is also a mother-figure, and though she punishes Tenorio for his crimes, she also asks that he be forgiven, and accepts her own death to balance out his. 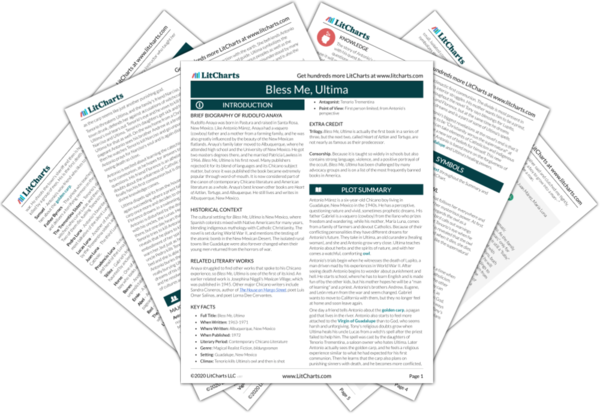 Punishment and Forgiveness Quotes in Bless Me, Ultima

Below you will find the important quotes in Bless Me, Ultima related to the theme of Punishment and Forgiveness.
Chapter 3 (Tres) Quotes

"Ay, how true," my mother said and clutched me tightly, "and what a sin it is for a boy to grow into a man--"
It was a sin to grow up and be a man.

God was not always forgiving. He made laws to follow and if you broke them you were punished. The Virgin always forgave.

You are innocent until you understand, the priest of the church said, and you will understand good and evil when the communion is placed in your mouth and God fills your body.

Unlock with LitCharts A+
Chapter 11 (Once) Quotes

"But it's not fair to those who don't sin!" I countered.
"Tony," Cico said softly, "all men sin."
I had no answer to that. My own mother had said that losing your innocence and becoming a man was learning to sin. I felt weak and powerless in the knowledge of the impending doom.

You foolish boy, God roared, don't you see you are caught in your own trap! You would have a God who forgives all, but when it comes to your personal whims you seek punishment for your vengeance. You would have my mother rule my heavens, you would send all sinners to her for forgiveness, but you would also have her taint her hands with the blood of vengeance –
Vengeance is Mine! He shouted, not even your golden carp would give up that power as a god!

I could not understand why Narciso, who did good in trying to help Ultima, had lost his life; and why Tenorio, who was evil and had taken a life, was free and unpunished. It didn't seem fair. I thought a great deal about God and why he let such things happen.

"The atomic bomb," they whispered, "a ball of white heat beyond the imagination, beyond hell - " And they pointed south, beyond the green valley of El Puerto. "Man was not made to know so much," the old ladies cried in hushed, hoarse voices. "They compete with God, they disturb the seasons, they seek to know more than God Himself. In the end, that knowledge they seek will destroy us all - "

There seemed to be so many pitfalls in the questions we asked. I wanted answers to the questions, but would the knowledge of the answers make me share in the original sin of Adam and Eve?
"And if we didn't have any knowledge?" I asked.
"Then we would be like the dumb animals of the fields," Florence replied.
Animals, I thought. Were the fish of the golden carp happier than we were? Was the golden carp a better God?

I closed my eyes and concentrated. I had just swallowed Him, He must be in there! For a moment, on the altar railing, I thought I had felt His warmth, but then everything moved so fast. There wasn't time just to sit and discover Him, like I could do when I sat on the creek bank and watched the golden carp swim in the sun-filtered waters.
God! Why did Lupito die?
Why do you allow the evil of the Trementinas?
Why did you allow Narciso to be murdered when he was doing good?
Why do you punish Florence? Why doesn't he believe?
Will the golden carp rule - ?
A thousand questions pushed through my mind, but the Voice within me did not answer.

The thundering report of the rifle followed the flash of fire. That shot destroyed the quiet, moonlit peace of the hill, and it shattered my childhood into a thousand fragments that long ago stopped falling and are now dusty relics gathered in distant memories.