Download this LitChart! (PDF)
Teachers and parents! Struggling with distance learning? Our Teacher Edition on Blood Wedding can help.

Welcome to the LitCharts study guide on Federico García Lorca's Blood Wedding. Created by the original team behind SparkNotes, LitCharts are the world's best literature guides.

A concise biography of Federico García Lorca plus historical and literary context for Blood Wedding.

A quick-reference summary: Blood Wedding on a single page.

In-depth summary and analysis of every act of Blood Wedding. Visual theme-tracking, too.

Explanations of Blood Wedding's symbols, and tracking of where they appear.

An interactive data visualization of Blood Wedding's plot and themes.

García Lorca’s father was a successful farmer married to a teacher. Together they raised four children, of which Federico García Lorca was the eldest. When the author was ten years old, the family moved to Granada, where García Lorca enrolled in a Catholic school as well as a secular institute run by the Roman Catholic Church. Later, García Lorca attended the University of Granada, where it took him nine years to earn a degree on account of his unimpressive schoolwork. An impassioned pianist, he traded music for writing when he was a young man, eventually befriending several artists, including filmmaker Luis Buñuel and painter Salvador Dalí. In 1919 he wrote his first play, The Butterfly’s Evil Spell, which was composed in verse. Unfortunately, it was largely made fun of by critics and thus only ran for four shows. In the 1920s García Lorca became associated with Spain’s avant-garde scene, publishing both poetry and plays, including Gypsy Ballads, his most popular poetry collection, which came out in 1928 and is largely about life in Andalusia—a theme he explored throughout his career. After a brief stint in New York City in 1929, the author returned to Spain during Primo de Rivera’s dictatorial rule, at which point he began touring as an actor and director of a theater troupe that brought plays to rural communities throughout the country. It was during this period that he penned three plays now known as the “rural trilogy,” which includes Blood Wedding, Yerma, and The House of Bernarda Alba. As he presented these plays, he became known for his socialist beliefs. Because of the Spanish government’s fascist government at the time, though, he was arrested in 1936 on the same day that his brother-in-law was assassinated after having accepted the position of mayor in Grenada. It is said that García Lorca himself was assassinated for political reasons the following day, though some people uphold that there were other factors that contributed to his execution.
Get the entire Blood Wedding LitChart as a printable PDF.
"My students can't get enough of your charts and their results have gone through the roof." -Graham S.
Download 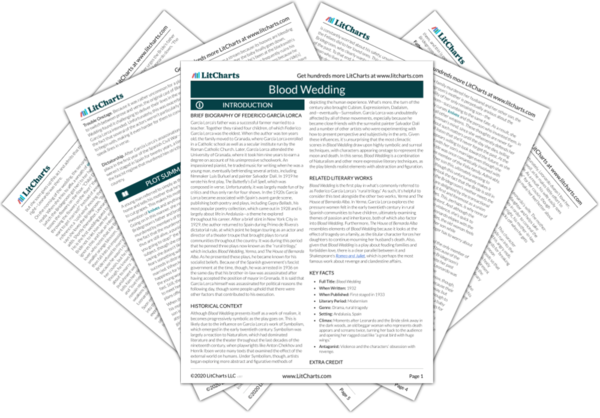 Although Blood Wedding presents itself as a work of realism, it becomes progressively symbolic as the play goes on. This is likely due to the influence on García Lorca’s work of Symbolism, which emerged in the early twentieth century. Symbolism was largely a reaction to Naturalism, which had dominated literature and the theater throughout the last decades of the nineteenth century, when playwrights like Anton Chekhov and Henrik Ibsen wrote many texts that examined the effect of the external world on humans. Under Symbolism, though, artists began exploring more abstract and figurative methods of depicting the human experience. What’s more, the turn of the century also brought Cubism, Expressionism, Dadaism, and—eventually—Surrealism. García Lorca was undoubtedly affected by all of these movements, especially because he became close friends with the surrealist painter Salvador Dalí and a number of other artists who were experimenting with how to present perspective and subjectivity in the arts. Given these influences, it’s unsurprising that the most climactic scenes in Blood Wedding draw upon highly symbolic and surreal techniques, with characters appearing onstage to represent the moon and death. In this sense, Blood Wedding is a combination of Naturalism and other more expressive literary techniques, as the play blends realist elements with abstraction and figuration.

Other Books Related to Blood Wedding

Blood Wedding is the first play in what’s commonly referred to as Federico García Lorca’s “rural trilogy.” As such, it’s helpful to consider this text alongside the other two works, Yerma and The House of Bernarda Alba. In Yerma, García Lorca explores the pressure women felt in the early twentieth century in rural Spanish communities to have children, ultimately examining themes of passion and inheritance, both of which also factor into Blood Wedding. Furthermore, The House of Bernarda Alba resembles elements of Blood Wedding because it looks at the effect of tragedy on a family, as the titular character forces her daughters to continue mourning her husband’s death. Also, given that Blood Wedding is a play about feuding families and forbidden love, there is a clear parallel between it and Shakespeare’s Romeo and Juliet, which is perhaps the most famous work about revenge and clandestine affairs.
Key Facts about Blood Wedding

Trouble Onstage. Because it was rather uncommon for a play to switch between prose and verse, the original cast of Blood Wedding found it challenging to deliver their lines in the way García Lorca intended. Unfortunately, this was exacerbated by the fact that several of the actors weren’t particularly talented to begin with, making it even harder for them to convincingly speak lines in verse.

Dictatorship. After García Lorca’s assassination—which took place in the first year of the Spanish Civil War—his plays weren’t staged in Spain for twenty years, a time during which the fascist regime that murdered him strictly controlled the country. 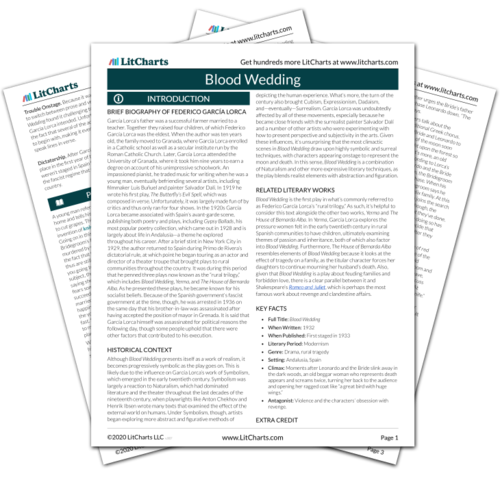 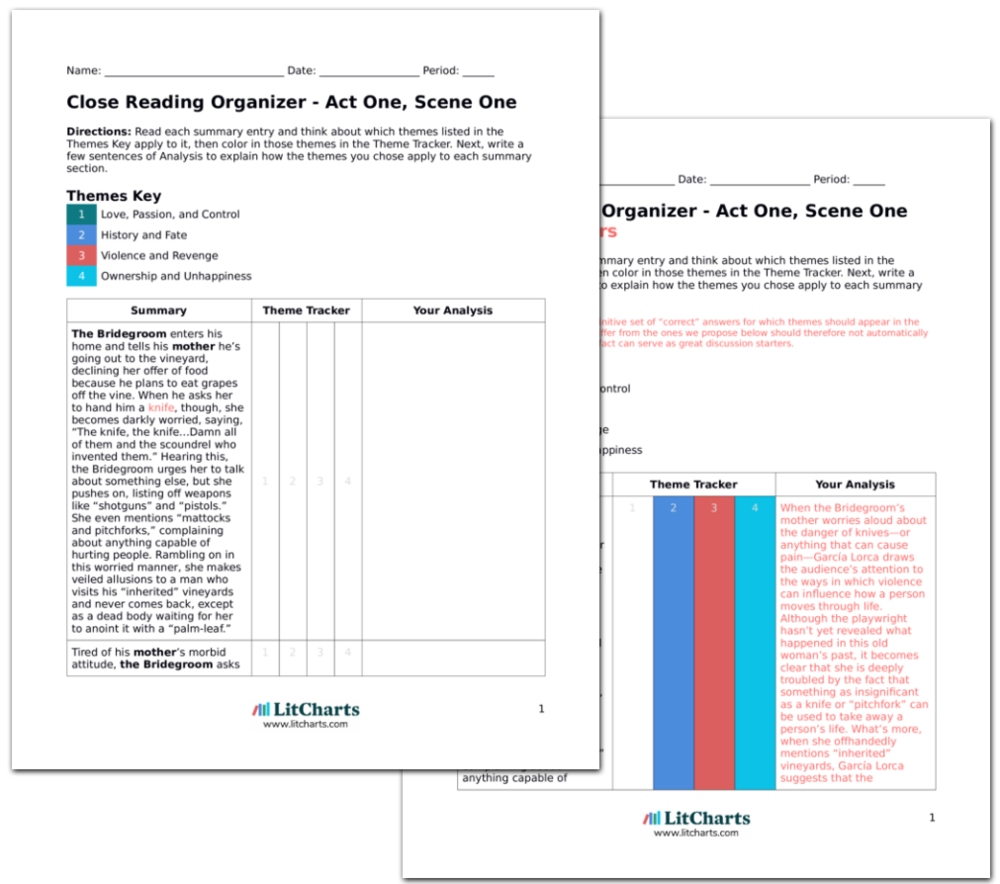