Download this LitChart! (PDF)
Teachers and parents! Struggling with distance learning? Our Teacher Edition on Bodega Dreams can help.

Julio Mercado, the narrator, begins by describing his happy-go-lucky, trouble-loving, streetwise best friend Sapo. The two of them grew up in Spanish Harlem (also known as “El Barrio”), the crime-ridden neighborhood in New York City. Julio’s high school was an oppressive place full of white teachers who demoralized Latinx students, and immigrant teachers who tried to help the students but had little power. By eighth grade, Sapo had dropped out of school, and Julio was attending a more competitive school downtown.

In the present day, Julio is a college student and married to his childhood crush, Blanca. Julio reflects on the time he met a man named Willie Bodega through Sapo. Julio admits that he was drawn to Bodega’s idealism and dreams of empowering the Latinx community in Spanish Harlem. Blanca, who’s pregnant, is distrustful of Sapo and Bodega, and she fights with Julio whenever he goes off with Sapo to meet Bodega. Sapo often has Julio hold onto packages for him, which presumably contain drugs.

On the evening when Julio and Bodega first meet, Bodega explains that he has big dreams for the neighborhood: he wants to buy all the property in Spanish Harlem to secure affordable housing for the Latinx community. All he asks for in return is people’s loyalty. Years ago, Bodega used to be a Young Lord activist, but his efforts to empower the community legally were thwarted by City Hall. Bodega then began smuggling guns and resources, funding his endeavors by moving heroin. Now, he’s paired up with a lawyer named Edwin Nazario to fund his activist dreams through illegal means. Bodega wants Julio to connect him with Blanca’s aunt Vera, who lives in Miami with her wealthy Cuban husband. Bodega has been infatuated with Vera since he was a teenager, and he wants her back. In exchange, Bodega offers Julio a nice apartment in one of his buildings for cheap rent. Although Julio is tempted by the offer, he fears Blanca’s wrath and refuses. But later that evening, as Blanca and Julio discuss baby names, Julio has a change of heart. He wants to provide a nice home for Blanca and the baby, so he agrees to help connect Bodega with Vera.

That evening, Blanca finds a rental contract for their new apartment, which Bodega slipped under their door. Blanca is angry that Julio didn’t discuss moving with her, but she’s also distracted: she’s seeking a husband for her friend Claudia, who desperately needs a green card. The next day, Julio goes with Sapo to meet Nazario and Bodega, and they overhear Nazario and Bodega talking about somebody named Alberto Salazar. When Bodega and Julio talks, Bodega is adamant that he’ll marry Vera after he reconnects with her. He explains to Julio that they were in love when Bodega was a young, idealistic activist, but Vera’s mother forced her to marry a rich man instead. The next day, Julio and Blanca move into their new apartment. As they move in, a news report on the television announces that an undercover journalist named Alberto Salazar has been killed in Spanish Harlem. Julio freezes when he learns that Salazar’s body was recovered with a bite mark on one shoulder.

Julio reflects on his schooldays with Sapo—who bites people when he fights them. Julio recalls a day when a teacher named Mr. Blessington said racist things about Latinx culture, eventually provoking an altercation with Sapo. In the tussle, Sapo bit Mr. Blessington’s shoulder and ripped off a chunk of his flesh. A Latinx teacher named Mr. Tapia ran in and urged Sapo to pretend he’d heard voices when the police came, because nobody would believe that Mr. Blessington provoked Sapo. Sapo spent the rest of the year in counseling (instead of in juvenile hall) and eventually dropped out of school.

Back in the present day, after hearing about the bite mark on Salazar’s body, Blanca worries that Sapo might have killed Salazar—but Julio deflects her suspicions. The next day, Nazario meets Julio and reassures him that Sapo is safe in hiding and that he won’t get in trouble with the law. The whole neighborhood treats Nazario warmly—they know that he associates with Bodega, who’s positive actions have permeated the neighborhood. Nazario takes Julio to meet a salsa museum owner, and Julio learns that Bodega paid for the museum owner’s daughter’s medical school fees. Nazario explains that he wants to build a thriving, educated, middle-class “army” to pull New York’s Latinx community out of poverty. When they return to Julio’s, a nervous Bodega is waiting for them. They head to Vera’s high school reunion; Bodega wants Julio to tell Vera that he’s waiting in a very expensive car outside. When Julio meets Vera, he reflects that Vera looks more like a wealthy white woman than a Latinx immigrant. Julio tells Vera that he’s married to Blanca and that “William Irazarry” (Bodega) is waiting outside for her. Then, Julio, Vera, and Bodega all drive off in Bodega’s car together to see Bodega’s buildings, and Vera is pleasantly surprised that Bodega is doing so well for himself.

Later that evening, Bodega and Vera turn up at Julio’s apartment drunk, giddy, and talking about their youthful love affair. Bodega takes Vera’s engagement ring off and gives it to Julio, saying he’ll buy an even bigger one for Vera himself. When Blanca returns home, she’s upset about the ring: she thinks it’s immoral to keep it. Julio and Blanca get into a huge argument about Blanca’s Pentecostal religious views, which Julio believes have brainwashed her with nonsense. Later than evening, feeling sheepish, Julio surprises Blanca at her church, and she’s touched that he came. A teenager named Roberto Vega is being anointed. Julio tries not to laugh as Roberto gives an animated sermon in which he repeatedly calls the women in the congregation “whore” and “prostitute” while they swoon over him like he’s “the Lord’s stud.” Julio feels angry that people’s faith makes them believe it’s alright to sit in squalor now because they’ll all have luxury in heaven.

As Julio and Blanca walk home, they realize their building is on fire—and Nazario is there. Julio realizes that a mobster named Aaron Fischman must have set fire to the building as retaliation for his associate Salazar’s murder. After the fire is put out, Blanca’s church community chip in to help Julio and Blanca pack up the remnants of their things and move to their new place, which Bodega sorts out for them immediately. Blanca accepts the offer despite her worries about Julio’s growing involvement in shady business. The next day, Nazario takes Julio to meet a mafia boss named Mr. Cavalleri, who gives them permission to retaliate against Aaron Fischman. Bodega is notably absent, no doubt distracted with Vera. On the way back, Nazario explains that the United States acquired its wealth by cheating, stealing from, and murdering Indigenous people. Nazario reasons that Latinx people don’t have the privilege of hiding their crimes behind dubious legislation, so they have to resort to crime—but in the end, it’s all the same. Julio thinks about the poverty in Spanish Harlem, where disenfranchised immigrants live down the street from the world’s richest people, and he starts to believe in Bodega’s cause.

When Julio arrives home, Roberto Vega and Blanca’s friend Claudia are there. Everyone’s in a hubbub because Roberto (who’s 17) and Claudia (who’s 29) want to elope. They all convince Roberto to talk to his mother before leaving town. Later, that evening, Bodega tells Julio that he’s confronting Vera’s husband, John Vidal, tomorrow. Julio wonders why Vera is encouraging Bodega to face off with Vidal.

The next day, Julio arrives home to find Blanca and Pastor Velasquez sitting on the couch—Blanca wants Pastor Velasquez to talk Julio out of his criminal ways. Just then, the doorbell rings: two detectives named Ortiz and DeJesus want to question Julio about Sapo’s involvement with Salazar’s murder. Julio denies knowing anything in order to protect Sapo, which upsets Blanca. At the police station, the lead investigator, Captain Leary, arrives to interview Julio. He looks bored and lets Julio go home without really questioning him. When Julio returns home, Blanca has gone to stay to her mother’s place. Julio’s terrified that she won’t return and he calls her, telling her that he misses her desperately.

The next day, Julio feels lost and sad. He bumps into Sapo and reluctantly agrees to go along to the restaurant where Bodega will confront Vidal. Bodega and Vera walk in, and Bodega makes a big show of making Vera tell Vidal that she’s leaving him. Vidal insults Vera, and Bodega lunges for Vidal. Suddenly, a gunshot goes off. Vera has killed Vidal, and she’s hysterical. Thinking quickly, Bodega calls Nazario. Bodega tells Julio that he’s going to take the blame for the murder, which makes Julio thinks that Bodega is lost. As Bodega leaves, he turns back and calls Julio his brother.

The next day, Bodega is shot dead in the street. Julio is heartbroken. Nazario tells the police that Bodega shot Salazar and Vidal in order to protect the others involved in those murders. Later, Blanca returns home—she’s worried about Julio’s grief over Bodega, and they patch things up. Just then, Blanca’s sister Negra bangs on the door: she has some gossip for Julio. It turns out that Vera wasn’t in love with Bodega—she was in love with Nazario all along. Suddenly, Julio realizes that Nazario and Vera orchestrated this whole plan to get rid of Bodega and take over his fortune. As much as it pains Julio to do so—because he really doesn’t trust the police—he calls Ortiz and DeJesus to tell them that Nazario was behind everything.

Bodega’s wake lasts for three days. The whole neighborhood comes out, and they all talk about the ways in which Bodega helped them, bonding over their shared experiences with Bodega. Sapo tells Julio that he’s going to disappear for a while and hugs Julio. He tells Julio that they’re like brothers, as always. Julio thinks that Sapo might wind up being the one who takes over Bodega’s fortune, and the thought makes him chuckle.

At Bodega’s burial, Julio goes up to Nazario and says that he knows about everything. Nazario looks like he wants to kill Julio. Suddenly, Ortiz and DeJesus grab Nazario from behind and arrest him. As Nazario is being hauled away, he yells out to Julio, asking for Sapo to get in touch if he wants help when he takes over. As Julio is walking home, he bumps into an old man and his grandson. They’ve just arrived in New York from Puerto Rico, and they’re looking for Bodega. Julio says that there’s no Bodega, but he’ll help them instead, and he offers to host them until they find their feet.

That night, Julio has a dream: in his dream, Bodega knocks on the door and leads Julio to the window. Outside, Spanish Harlem is thriving. The streets are full of murals depicting Bodega’s image. People are optimistic and happy, and they believe—perhaps for the first time ever—that change is possible. Julio realizes that Bodega may have died, but his dream lives on. 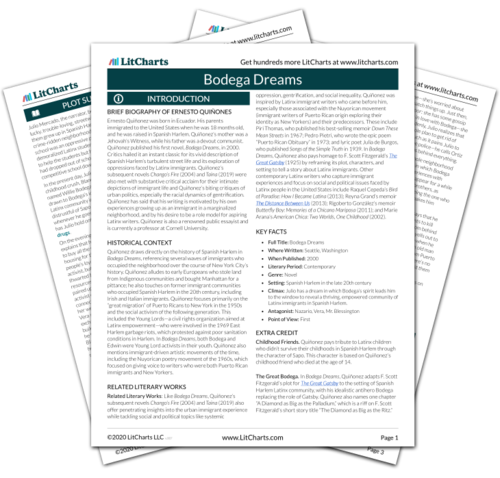 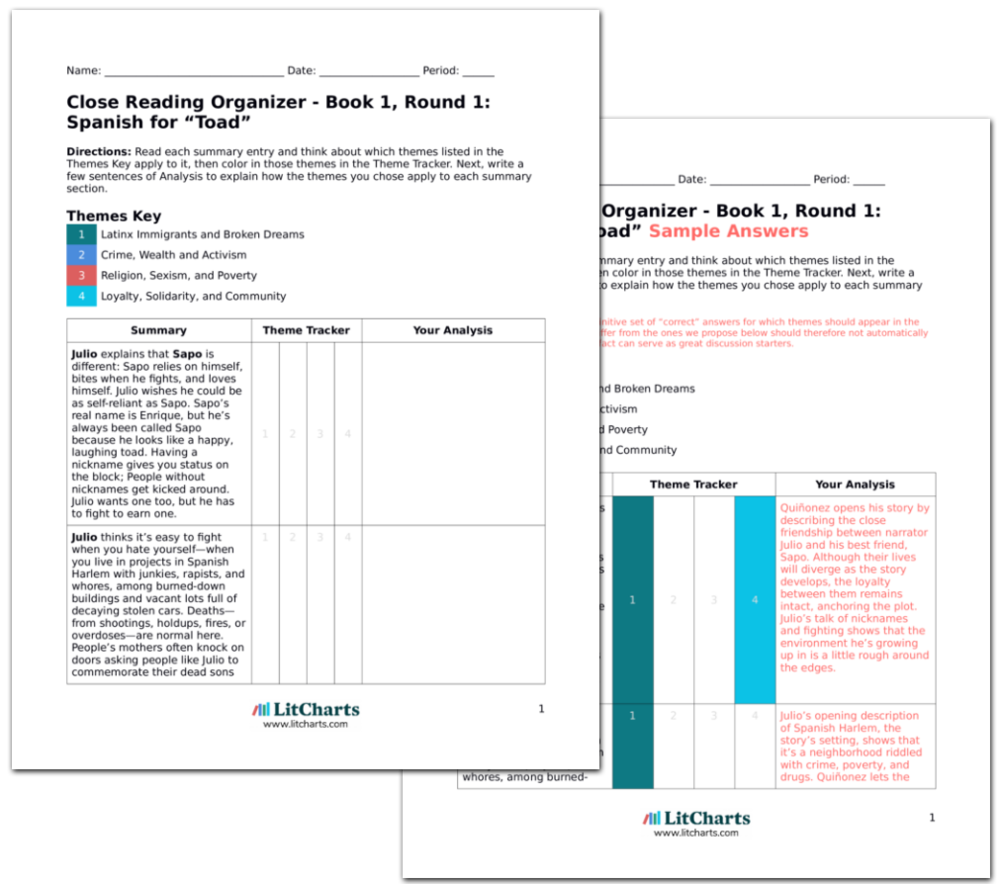