In his 2016 memoir Born a Crime, comedian Trevor Noah recounts his childhood in South Africa under the apartheid government and the first few years of democratic rule by the nation’s black majority. Born in 1984 to a black Xhosa mother and a white Swiss expatriate father, Noah is not merely an anomaly in apartheid South Africa; his existence is actually illegal because the regime outlawed relationships between people of different races. While the 18 chapters of Born a Crime generally trace Noah’s childhood from his birth to the beginning of his comedy career after high school, they consist of vignettes rather than a linear story. Each chapter also begins with a short preface, generally about the social and historical context behind the events Noah recounts.

The first part of Born a Crime (Chapters 1-8) offers a portrait of Noah’s family under the apartheid regime. In the first chapter, he focuses on the role of religion in his childhood. Every Sunday, his mother, Patricia Nombuyiselo Noah, takes him and his baby brother, Andrew, to three churches: an integrated megachurch that seeks “to make Jesus cool,” an austere white church whose pastor focuses on interpreting passages from the Bible, and an informal outdoor black church whose congregants spend hours praying for Jesus to alleviate their suffering. He shows how Christianity offers his mother a source of moral strength and discipline, which she seeks to pass onto her children. One day shortly after anti-apartheid leader Nelson Mandela is freed from prison, when their secondhand car fails to start, they take informal minibuses to church and nearly get attacked by an angry Zulu driver, emphasizing the danger and intergroup tension that continues to structure black South Africans’ everyday lives in the wake of apartheid.

In the second chapter, Noah explains how he came into being: his mother’s fearlessness was a lifelong pattern, and she insisted on becoming a secretary and illegally living in a white neighborhood of downtown Johannesburg long before it became clear that the apartheid system was falling apart. She has a child with Robert, the Swiss man who rents her a room, but never expects him to be Trevor’s father. The doctors are shocked when Trevor comes out so light-skinned and, for the first years of his life, Patricia has to constantly hide him because, according to his complexion, he is not black but “colored” (the technical apartheid-era term for mixed-race people, who were considered an independent racial group and segregated from whites and blacks alike). When they visit her family in Soweto, the subject of chapter three, Trevor cannot leave the yard lest he get picked up and taken away by the police; Noah remembers feeling strangely isolated from his cousins and neighbors, but not yet understanding why he was considered so different. In the fourth chapter, he explores his early realizations about this difference and struggle to define himself in relation to South Africa’s various native ethnic groups. By learning a number of different languages, Noah realized, he could connect to almost anyone and fit himself into situations where it would be dangerous to be an outsider.

In his fifth chapter, Noah tells the story of his mother’s own “search for belonging.” As her family’s unwanted middle child, in her teenage years Patricia finds herself working on the family’s farm and often going without food in the desolate, rural Xhosa homeland. When she returns in her 20s, she has to find a place for herself and moves into Johannesburg, doing her best to rise socioeconomically and support her son on her own. She insists that Trevor learn English and refuses to let “the logic of apartheid” set limits on his imagination or sense of self; when the apartheid regime appears to be weakening, she breaks new ground by moving into a suburban colored neighborhood called Eden Park with Trevor. In Chapter 6, Noah shows how his mother balanced her insistence on cultivating his curiosity—which led him to endless mischief, from pranks at school to burning down a white family’s house—with firm but loving discipline. Chapter 7 and Chapter 8 focus on Noah’s relationships with two important loved ones: his dog Fufi, who turns out to be “cheating” on him by spending her days with another family in the neighborhood, and his father, who is mysterious and reclusive but—as Noah discovers in his 20s—also deeply proud of his son’s budding career and always strongly opposed the apartheid regime throughout his time in South Africa, even opening Johannesburg’s first integrated restaurant.

In the second part of Born a Crime (Chapters 9-14), Noah tells a number of shorter personal stories from his adolescence, especially focusing on his relationship with others his age and early romantic blunders. In Chapter 9, Noah explains the ironic ostracism he felt living in a colored neighborhood where everyone looked like him: South Africa’s colored people are actually a distinct, Afrikaans-speaking population descending from the children of early Dutch settlers and native women they partnered with (or, frequently, assaulted), as well as indentured servants brought to South Africa from Asia. As a result, Trevor looks colored but does not share colored culture, and his neighbors bully him extensively for at once being too white (speaking English instead of Afrikaans) and being too black (speaking Xhosa and hanging out with black kids). After one particularly demoralizing episode of bullying, he asks his stepfather, Abel, for help and then watches in horror as Abel beats the bully and threatens to kill the child’s father.

In Chapter 10, Noah remembers the only other colored girl at his elementary school sticking him up for Valentine’s Day. In Chapter 11, he explains that he navigated his lack of a distinctive racial or ethnic “group” in high school by reselling food from the cafeteria (since he was always first in line) and using jokes to pop in and out of various groups. In Chapter 12, he remembers a second romantic embarrassment: he has a crush on a popular girl but thinks he is too much of a geek to have any shot, then learns that she likes him back—but only after she has moved away to the US. In Chapter 13, Noah recounts his family’s move from the colored neighborhood of Eden Park to the mostly white suburb of Highlands North, where he feels completely cut off from the rest of the children due to his race and ends up hanging out with the children of the neighborhood’s black domestic servants. With one of his friends, Teddy, he starts stealing alcoholic chocolates from the mall; when they are caught and chased off by security guards, Trevor manages to escape but Teddy does not. Later, school officials and the police interrogate Trevor about who Teddy’s accomplice could have been; they pull out black-and-white security video footage and Trevor thinks he has been caught, but they do not notice that it is him on the tape because his skin looks white in the video. In Chapter 14, Noah writes about the “mini-empire” he built selling pirated CDs and the horrific embarrassment his friend Tim got him into at prom. Tim sets Trevor up with Babiki, who is truly “the most beautiful girl [he has] ever seen,” but on prom night Trevor realizes that she does not speak English, Xhosa, Zulu, or any language except her native Pedi (one of the few South African languages Trevor does not speak). She refuses to go to the dance and Trevor realizes she must be frightened. But she also kisses him goodbye at the end of the night, and he is dumbfounded.

Chapters 15-18, the third and final part of Born a Crime, follows Trevor’s budding independence at the end of high school as he transforms his CD “empire” into a crew of dancers and middlemen. In Chapter 15, he explains how his crew got locally famous through Trevor’s DJing and their star dancer, Hitler, whose inconvenient name shows the ridiculousness of both colonialism (which forces black South Africans to choose white names and does not adequately teach them about history) and the silence about colonialism among Westerners, who easily see the inhuman atrocity of the Holocaust. It also gets the crew into trouble when they perform at a local Jewish school.

In Chapter 16, Noah remembers becoming the most popular middlemen in the dangerous, poor neighborhood of Alexandra, where his friend and business partner Sizwe lives. Although they are excellent at buying (usually stolen) goods for cheap and reselling them at much higher prices, they don’t make enough to save much money or afford university tuition. Trevor realizes how poverty perpetuates itself in communities like Alexandra and how the law automatically assumes poor black people to be criminals—in fact, after the police destroy his computer during a concert, Trevor’s business is decimated. He has a more severe run-in with the law in Chapter 17, when he gets caught driving one of the cars his stepfather, a mechanic, is fixing in the backyard. The police assume Trevor has stolen the car and throw him in jail, where he is frightened and pretends to be a colored gangster. Unlike many of the poor South Africans in jail, Noah is lucky enough to be able to loan money from a friend—who turns out to have just asked his mother—and get an attorney. When an imposing man joins his holding cell, Trevor worries about getting attacked—but then he hears the man struggling to talk to the prison guard, helps them translate, and learns that the man is actually “the biggest teddy bear in the world,” who stole videogames to feed his family. Noah realizes how divorced popular images of criminality are from the socioeconomic realities that lead people to crime. Fortunately, he gets off on bail.

The last chapter of Noah’s book recounts his stepfather Abel’s escalating, years-long abuse of Patricia. While Abel is outwardly charming and beloved by the community, he drinks excessively—destroying his auto repair business’s profits in the process—and cannot stand to see Patricia living on her own terms instead of submitting to his control. When he is drunk, his temper is uncontrollable: he beats Trevor so badly that Trevor avoids him for years, and every few years he brutally attacks Patricia. Each time, she calls the police, and each time, they side with Abel and leave. Eventually, Abel buys a gun and Patricia moves into a separate bedroom, then into a shed in the back of the house. Unwilling to watch his family deteriorate, Trevor gradually cuts off contact for some time as his comedy career takes off. Finally and courageously, Patricia meets another man and leaves Abel, who is furious and tries to murder her in front of their kids and her new husband. Trevor gets a call from his brother Andrew and rushes to the hospital, where Patricia miraculously survives despite having been shot in the head. However, Abel gets off without even serving prison time or losing custody of his children, and he continues to live near Patricia in Johannesburg. This last story attests to the culture of violence, abuse, and impunity in a country whose legal system still functions as during apartheid, protecting white people and their property against even perceived threats from people of other races but never taking black suffering seriously, especially violence against black women) 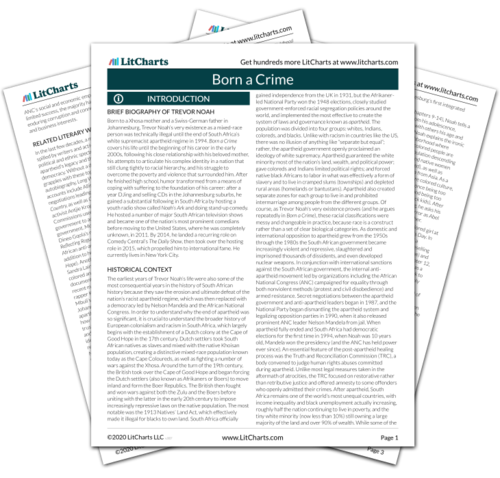