As tired French soldiers trudge back from battle, residents of the French town of Rouen anticipate the arrival of the occupying Prussian army. Once those Prussians arrive, the townspeople’s fear dissipates—some of them even befriend the Prussian soldiers, while others despise them and even murder occupying soldiers occasionally. There is much animosity in the air—but, still, life has to go on, and eventually people start planning for the future.

Three well-off men (Mr. Carré-Lamadon, Mr. Loiseau, and Count Herbert de Breville) decide one night to leave Rouen and pursue commercial interests in La Havre, where there is no Prussian occupation. The next day they gather their wives and meet outside a stagecoach, which is ready to take the six of them and four others through Normandy.

The other four passengers include two nuns (who say quiet and mumble prayers most of the ride), one republican (Cornudet), and one prostitute, Miss Rousset. Miss Rousset (also known as “Ball-of-Fat”) quickly becomes the object of interest and scorn in the carriage, as the other women make it clear she is not welcome and her presence is an embarrassment. However, hours later when the coach is stuck in snow and nobody has eaten all day, Miss Rousset produces a basket of food and wine that has been underneath her skirt. Inevitably, the rest of the carriage changes their attitude towards her and one by one they accept her kind offer of food. Suddenly, everyone is amicable, and the group talks about politics and Prussians for the rest of the journey. Miss Rousset impresses the group with stories of her resistance against the occupying soldiers, and she chastises Cornudet for his republican sympathies and lack of loyalty to Bonaparte.

Still moving much slower than expected, night falls and the group comes upon the town of Tôtes and finds an inn. Here, they are greeted by a terrifying sound: broken French spoken with a heavy German accent. There is a Prussian commander waiting for them, asking them to exit the carriage. While all are traveling with the permission of German officers back in Rouen, the group is still nervous. They share their papers (which have their names and occupations on them) with the commander.

The group enters the inn and sits down for dinner, fairly happy even though everyone is tired. Then the inn-keeper enters with a strange request: the Prussian commander has asked to see Miss Rousset alone. She at first refuses, but the group pressures her into going. “It is for you that I do this,” she tells the group. She comes back flustered but mum about what he asked for, and the topic is dropped as everyone eats dinner. There is more discussion about politics, the war, and the bad behavior of the enemy.

The next day, the group finds that the stagecoach has not been prepared for them. No one understands why it would not be ready, so Mr. Loiseau, Mr. Carré-Lamadon, and the Count walk into town to find the driver. Along their way, they find French townspeople cohabitating with the Prussian soldiers, and the Prussians doing kind favors for the townspeople. The men are shocked and a little disdainful, but a townsperson explains, essentially, that these soldiers are people too and that the poor—of any country—must look out for one another. The men move on and find their driver, who informs them that the Prussian commander had ordered him not to ready the carriage. No one understands why.

Later that night, Miss Rousset tells the group that the Prussian officer demanded that she sleep with him, and everyone reacts with outrage. The next morning, however, the six wealthy travelers are disgruntled and grow resentful. They are annoyed at Miss Rousset for being the reason that they are stranded (even though it is clearly the fault of the officer). Remembering her lower social status and her profession, the wealthier members of the group come to a mutual, damning conclusion: “Since it is her trade, why should she refuse this one more than another?”(In other words, that she should sleep with the officer, against her principles, so that the group can go free.)

The next day, determined to get Miss Rousset to do what they wish, the wealthier travelers confer with each other and decide that, rather than asking her outright, they will work the topic into conversation over dinner and discuss how, throughout history, sacrifices have been made for the greater good. Even the two nuns (albeit accidentally) add to the pressure by assuring Miss Rousset that, in religious life, an act is judged by its intention. Miss Rousset is solemn and quiet. Later that night, she gives in and does what everyone had hoped: she sleeps with the German officer. The group finds out while she is doing it, and they crassly celebrate their clever plan. The next day, the group leaves.

In her rush to get ready in the morning, Miss Rousset forgets to pack food. The rest of the group all have baskets of provisions, but nobody will even look at Miss Rousset, let alone share their food with her. The three married ladies talk emptily of high society chatter just to specifically exclude the prostitute. Miss Rousset is heart-broken by the hypocrisy of the rest of the group and by the act she had to endure, and she ends the story quietly crying the corner of the carriage headed north. 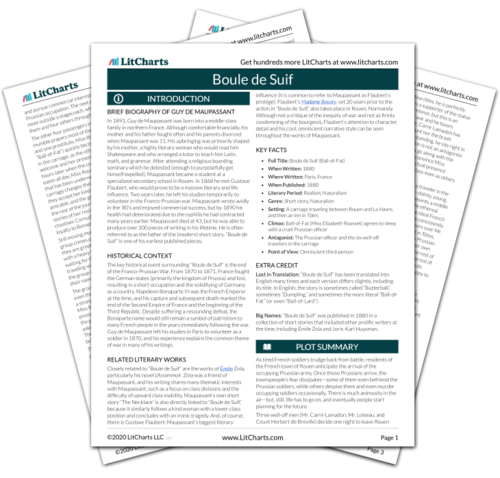 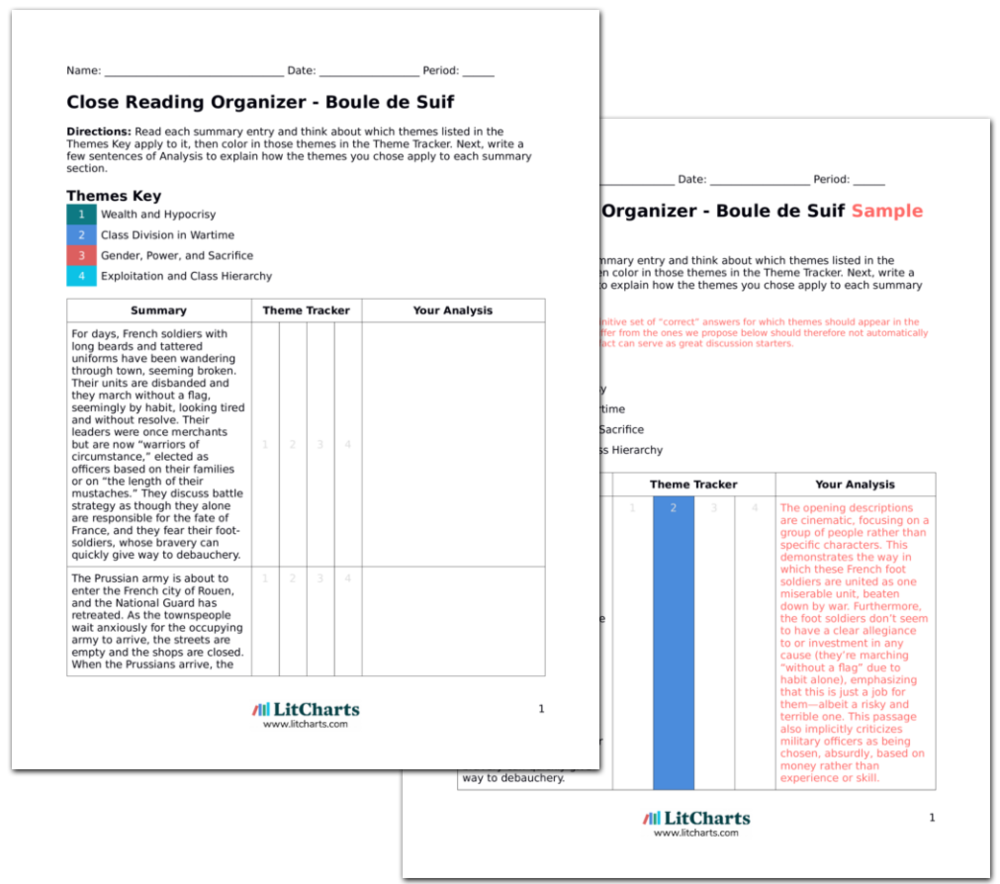